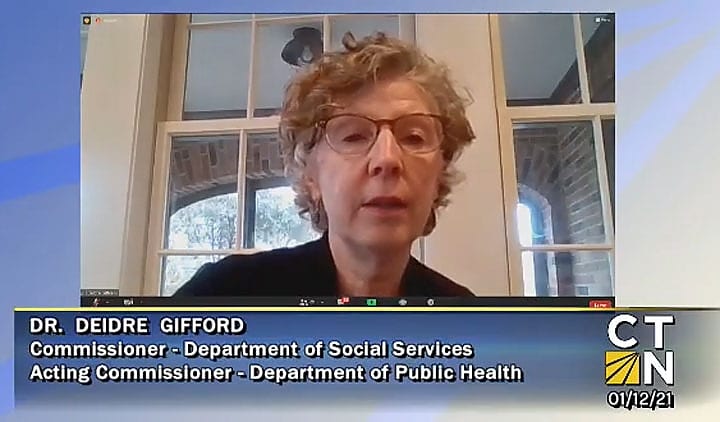 Based on the recommendations, there would be more than 1.5 Connecticut residents eligible for vaccination in Phase 1B.

A Connecticut advisory panel on Tuesday added everyone over the age of 65 and any adult with one federally-defined medical condition to its guidelines for the next phase of the COVID-19 vaccine rollout.

As the allocations subcommittee of the state’s COVID-19 Vaccine Advisory Group kicked off its virtual meeting, some members were distracted by an “elephant in the room.” Health and Human Services Secretary Alex Azar was in the process of shifting federal guidelines for the next phase of the vaccine rollout. The Trump administration was backing a plan to open up the next round of vaccinations to people 65 or older and people with comorbidities defined by the Centers for Disease Control and Prevention.

By the end of the hour-long meeting, the state panel adopted similar recommendations, adding the two large new populations to the group’s existing guidelines, which already included residents of congregate settings like prisons and frontline workers. Earlier this month, the advisory panel estimated Phase 1B included more than 800,000 people. One member estimated Tuesday’s addition adds another 720,000 residents to that group.

“When you see some of these additions, you’ll realize this is a very large group. So we would have to do some phasing-in of this group over time, otherwise … some people at the highest risk, that is people over 75, would undoubtedly would be sort of pushed to the back of the line,” said Acting Public Health Commissioner Dr. Deidre Gifford.

Although members said the list of conditions was likely to evolve, the conditions outlined by the CDC include ailments like cancer, chronic kidney disease, COPD, Down Syndrome, heart conditions, Type 2 diabetes, sickle cell disease and an immunocompromised state due to organ transplant. It also includes pregnancy, obesity, and smoking.

The new federal guidelines are built in part as an effort to get more first doses of the vaccine into residents while holding fewer doses in reserve for the required second shots. States are expected to receive more doses in the short term as a result.

Here in Connecticut, authority over who makes it into the next phase ultimately rests with Gov. Ned Lamont. In the past he was strongly suggested he would defer to the allocation panel’s recommendations. However, during a press event immediately before the panel’s Tuesday meeting, Lamont resisted the idea of significantly broadening the scope of Phase 1B.

In response to a question, Lamont said he had spoken with the HHS secretary about opening up the phase.

“We’ve got a lot more demand than we have access to vaccine right now – that’s one of the things, he’s giving us more vaccines but it’s still not enough to handle everybody over the age of 65 and essential workers and everybody with some pre-existing conditions,” Lamont said.

During their meeting, members of the panel were generally quick to endorse casting a wider net with the phase.

Last week, the group exhausted its two-hour limit for its meeting with sometimes-heated debates over balancing priorities like racial disparities with the state’s vulnerable elderly population. On Tuesday, they wrapped after one hour.

At the end of the meeting, the task of balancing those concerns seemed to be shifted to the Department of Public Health. The group tasked the agency with developing a rollout that would consider risks of mortality and severe illness as well as “explicitly address issues of equity and disparate impact of COVID.”

“I understand that the population size is increasing but I trust that you all will be able to come up with a fair, phased roll-in approach that will address all of the concerns that the committee has mentioned,” Nichelle Mullins, president of Charter Oak Health Center and co-chairwoman of the subcommittee, told Gifford.

With the next phase of the rollout expected to begin next week, Gifford urged patience as the agency begins to schedule appointments.

“We will not be able to get everyone a vaccine the very first week of Phase 1B. We are going to be asking for forbearance and patience from the public, and it’s on us to communicate to make sure everyone knows how to get an appointment and when it will be available, but patience will be required,” Gifford said.