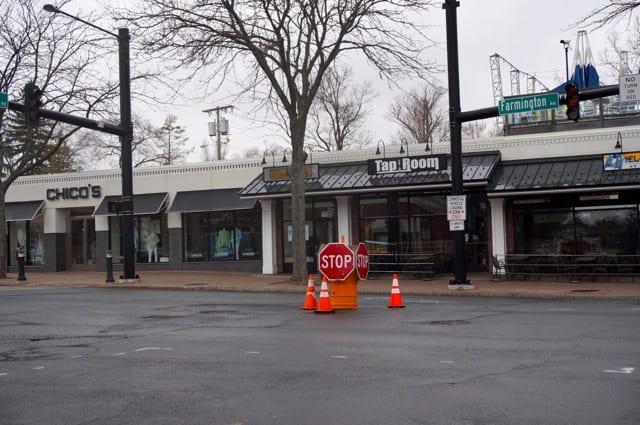 The traffic lights were out at many West Hartford Center intersections due to a power outage on Easter Sunday. Photo credit: Ronni Newton

An underground fire in Hartford early Sunday morning knocked out power to thousands in West Hartford as well as Hartford. 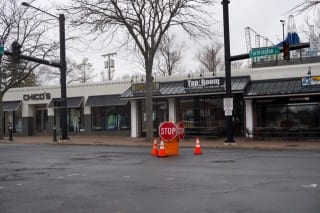 The traffic lights were out at many West Hartford Center intersections due to a power outage on Easter Sunday. Photo credit: Ronni Newton

The heart of West Hartford Center was a ghost town on Sunday, and not just because most stores were closed for the Easter holiday.

An underground fire in Hartford early Sunday morning initially impacted about 13,000 Eversource customers in Hartford and West Hartford. That number steadily decreased throughout the day Sunday as power was restored, but despite initial estimates of service restoration by mid-day, a large swath of West Hartford Center still had no service by nightfall.

Just before 9 p.m., Eversource’s outage map showed that the number of customers without power had jumped to 3,823, upsetting many residents who were just settling in to watch the UConn women’s basketball team play in the Final Four.

“They are making final repairs now. The crews are working to restore power as quickly and safely as possible,” DeSimas said. “It’s not uncommon in a restoration situation for the numbers to fluctuate as they are bringing people back online,” he said. 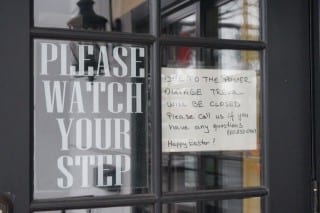 Treva was one of the restaurants in West Hartford Center forced to close on Easter due to a lack of power. Photo credit: Ronni Newton

DeSimas said he was not aware of anything new that impacted the number of customers affected by the outage.

Many West Hartford Center restaurants had to shut their doors and cancel hundreds of reservations for Easter brunches and dinners. Treva, A’vert Brasserie, Elbow Room, Grants, and Max’s Oyster Bar were among those that had locked doors and handwritten signs apologizing to customers.

DeSimas said that the outage was caused by the underground fire in Hartford, and that once crews began to work on the problem, initial estimates of how long it would take were increased.

According to NBC Connecticut, Hartford firefighters responded to a report of smoke coming out of a manhole at the 400 block of Farmington Avenue near the Sherman Street intersection at about 12:10 a.m. Sunday.