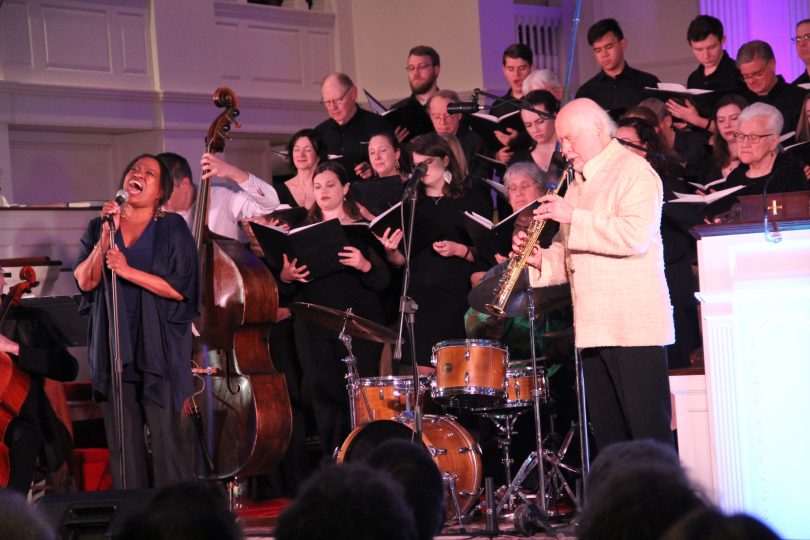 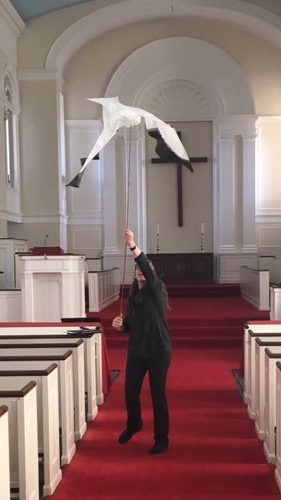 A seagull puppet, designed by Susan Aziz, is just one of the new features of the Consort. Courtesy photo

What better way to honor and celebrate Earth Day (perhaps it should be “earth week” as the official holiday is on the the 22nd), than by hearing a live performance of the Paul Winter Consort.

Paul Winter and the Paul Winter Consort will join forces with award winning vocalist, Theresa Thomason and the First Church Choir to present “One Global Community.” The performance will celebrate the world’s diversity and its ecological treasures.

New this year, First Church Music Director and artistic director for the local performance of the Consort, Jim Boratko, has commissioned puppets for the event. “These puppets have been created by puppet artist Susan Aziz, and they will add a visual dimension to the concert,” commented Jim.

Residents may recall seeing Susan’s larger-than-life “Colossal Puppets” at the holiday presentation of the nativity story at First Church the past two Christmas holiday seasons.

“We are thrilled to have Theresa back with us, and equally excited to have Paul Winter himself,” commented Jim. “The people of West Hartford, and beyond, are in for a treat with a concert by these talented musicians right here in our community.”

Tickets for the event are available online here. Prices are $40 for preferred seating, $30 for standard seating, and $20 for balcony seating. A $5 discount is available for seniors over 65 and children under 12.

Paul Winter and his group, the Paul Winter Consort, have performed around the world – from New York’s Carnegie Hall to the Miho Museum in Japan. One of the earliest exponent’s of world music, the group has also pioneered a new genre of “earth music” (described as “ecological jazz” by fans in Russia), interweaving classical, jazz, and world music elements with voices from what Winter calls “the greatest symphony of the earth.”

The Consort has won four Grammy Awards, for Spanish Angel (1994), a live album recorded in Spain; for Silver Solstice (2005), which celebrates the annual Winter Solstice Celebrations in New York;  Crestone (2007); and Miho: Journey to the Mountain (2010).

Since 1980, Winter and the Consort have been artists-in-residence at the world’s largest cathedral, New York’s St. John the Divine, where they have presented more than 100 special events, including the annual Winter and Summer Solstice Celebrations, Carnival for the Rainforest, and their ecological mass, Missa Gaia/Earth Mass, which is performed annually each October as part of the Feast of St. Francis. The Missa Gaia/Earth Mass will be the centerpiece of the concert.

Theresa Thomason is a world renowned Gospel singer. She toured Europe for more than 10 years, performing in over 150 European cities.Thomason remains a featured artist with the Paul Winter Consort at the annual Solstice, Missa Gaia and Earth Mass celebrations at St. John the Divine, in New York City. Many of these performances were televised on PBS and NBC. Thomason has also performed live at the United Nations for the Dalai Lama and others.

The First Church Choir is directed by Jim Boratko, organist and music director who recently celebrated his 20th year at First Church.