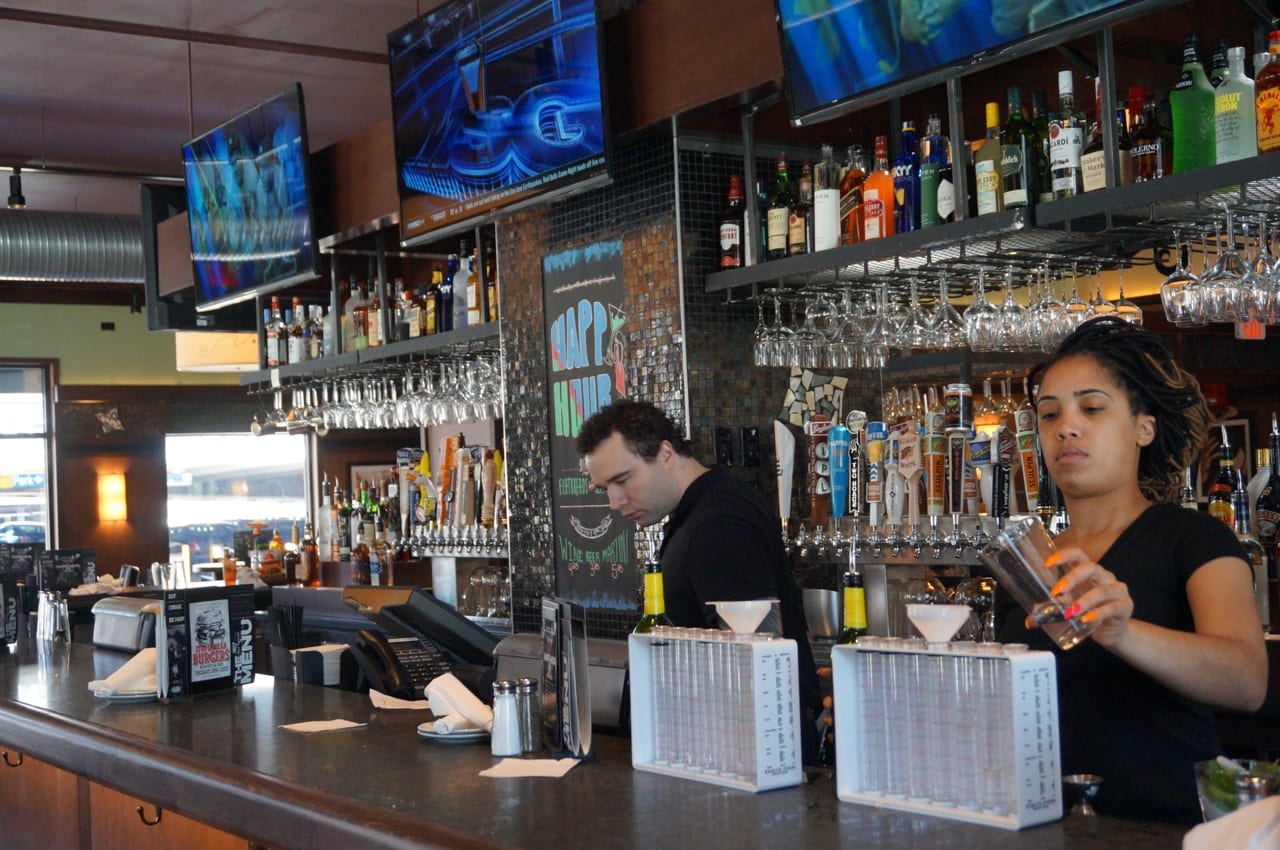 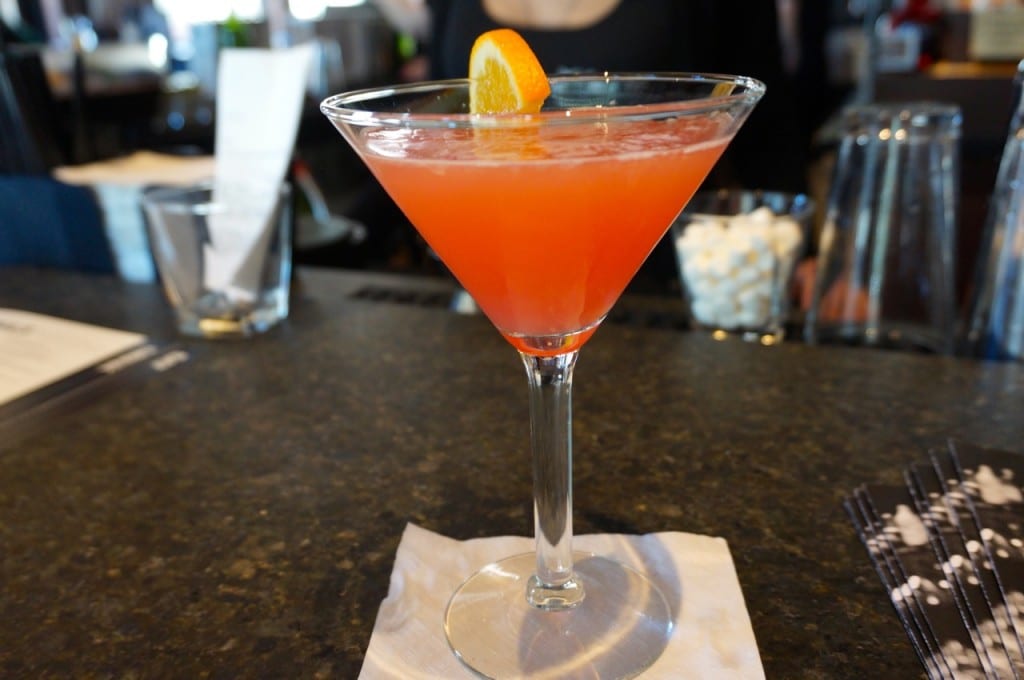 The first impression of West Hartford’s Bar Louie is that it’s going to be fun. 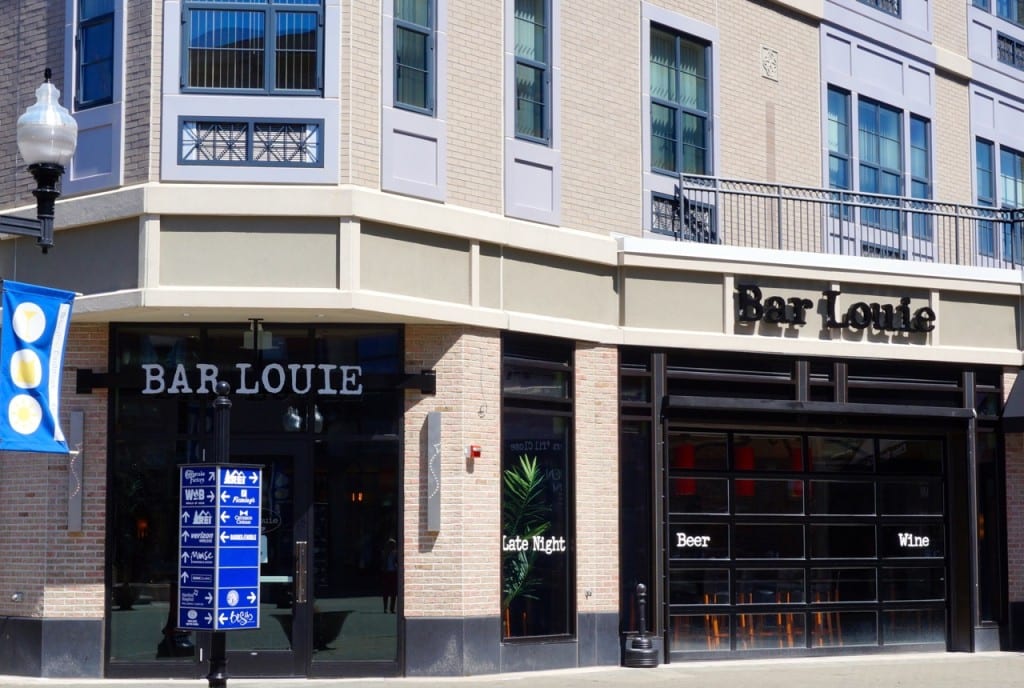 Bar Louie will open to the public at 4 p.m. on April 15. Photo credit: Ronni Newton

From the exterior Bar Louie has appeared ready to open for the past several weeks, and occasionally the large “garage” doors have been opened up, affording passersby a view of the interior.

On Friday, April 15, at 4 p.m., the wait will be over and Bar Louie will officially open to the public. The grand opening “Go Big” event is scheduled for Friday, April 22, and Saturday, April 23.

“We’re super excited to be able to open the doors this Friday,” Director of Operations Bryan Metzger said as he provided a tour of the space Wednesday afternoon. Wait staff and bartenders were busy receiving final training in anticipation of the first of two “friends and family” events scheduled for Wednesday and Thursday evenings as the restaurant preps for its official opening. 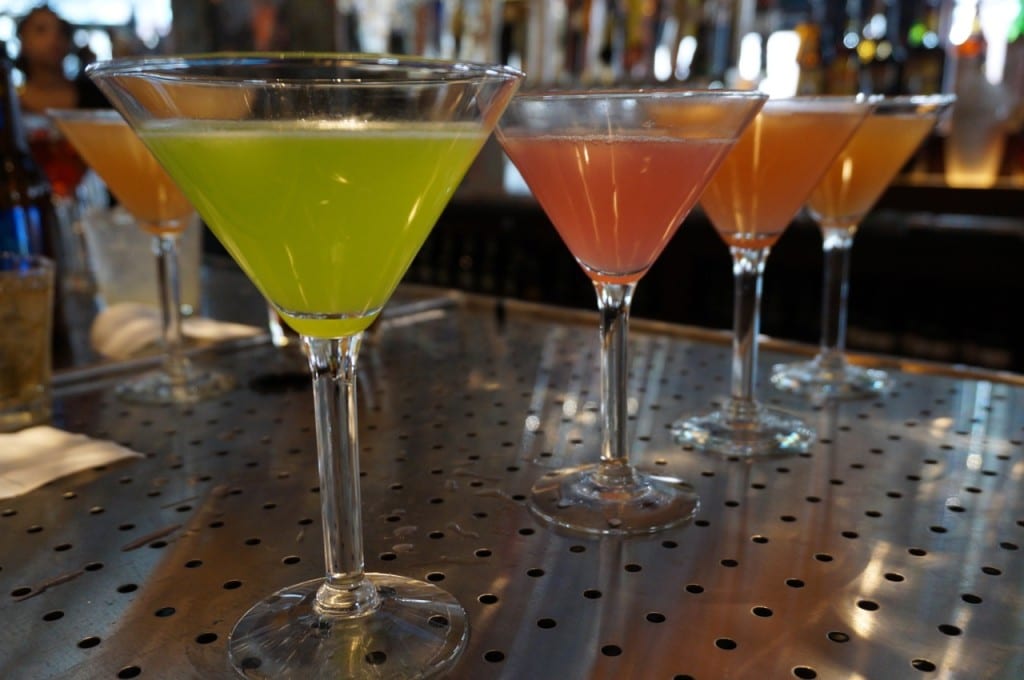 Bartenders were testing their skills as they created a rainbow-colored array of martinis. Photo credit: Ronni Newton

“We’re going to fulfill a niche that’s not covered in this market,” Metzger said. The combination of great handcrafted martinis, a dynamic beer selection, and a scratch kitchen serving American food is something he believes will really appeal to West Hartford diners.

“It’s not going to be a stodgy place where you go for a big meal,” Metzger said. “It’s a place where you can make new friends while hanging out, and many of the menu items are perfect for sharing.

Favorites include a large selection of flatbreads (including roasted vegetable and Buffalo chicken) and a great loaded nacho platter, Metzger said. “It’s upscale ‘American bar food,’ taking the classics and putting a little spin on them – foods people love with a twist to make them fresh and inviting,” he said.

The food is all made from scratch; nothing is frozen or microwaved.

There is already a wide array of restaurant choices in Blue Back Square and the rest of West Hartford Center, but Metzger doesn’t see that as a deterrent to attracting a crowd of customers.

“The great thing is we don’t look at other restaurants as competitors. We see them as brothers and sisters in arms,” said Metzger. He said Bar Louie will be another option for diners.

Metzger said that Bar Louie targets “all demographics,” although he anticipates a discernible difference in the crowd depending on the time of day. “We always consider ourselves family friendly,” he said, but at the same time martinis are a long-time institution at Bar Louie. Saturday shoppers, families stopping in for a quick dinner after sports practice, executives enjoying a business lunch, and bachelorettes celebrating with their girlfriends will all feel welcome. 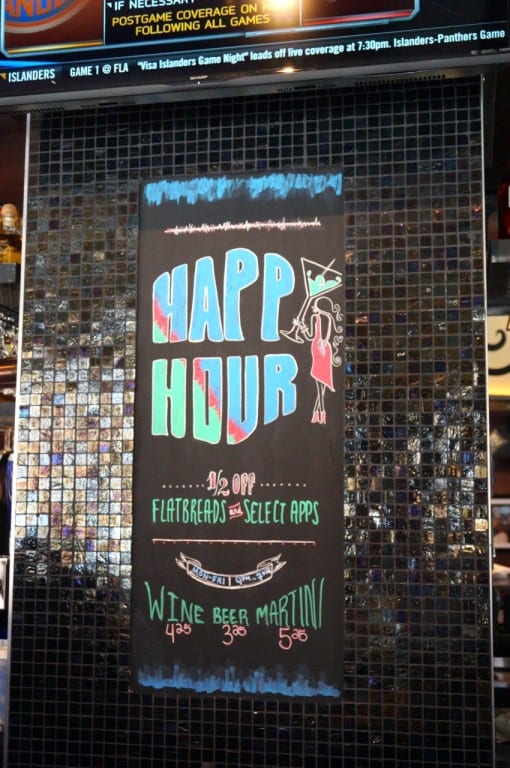 “I would bet West Hartford doesn’t have a better happy hour than we do,” Metzger said. Happy Hour is three hours long, from 4 – 7 p.m. on Monday through Friday with extensive food and drink specials. Thursday nights will feature live music.

On Tuesdays from 5 p.m. until closing there’s a $5 dollar burger special that includes a choice of fries or tots. There’s a choice of burger, too, with options including turkey and portabella mushroom, as well as the “Chicago stockyard chicken” that Metzger said is his favorite.

Desserts are not a large part of the menu, but the desserts they offer are made for sharing. The key lime “shiner” – key lime, layered with strawberries and cake, and served in a moonshine jar – certainly requires multiple forks.

Connecticut is a new market for Bar Louie. The West Hartford location is the state’s first, and the chain’s 111th restaurant. A Milford location is slated to open in June.

“We’re really excited to bring more than 100 new jobs to the community,” said Metzger. “Providing jobs is the best part of my job.”

The 6,800 square foot restaurant seats just over 200, and will get a bit larger in mid-May when garage doors open to the courtyard and the patio seating launches.

The “Go Big” grand opening event will feature an assortment of $5.25 martinis (including the Clover, and Diva, and other martinis with great names like “S’Mores,” and “Effen Good”) available all day long on both April 22 and 23. One free appetizer per guest is also available during “Go Big,” with choices that differ each day but include items like Bavarian pretzel sticks, chicken nachos, loaded fries or tots, wings, Buffalo chicken flatbread, and blackened salmon sliders. 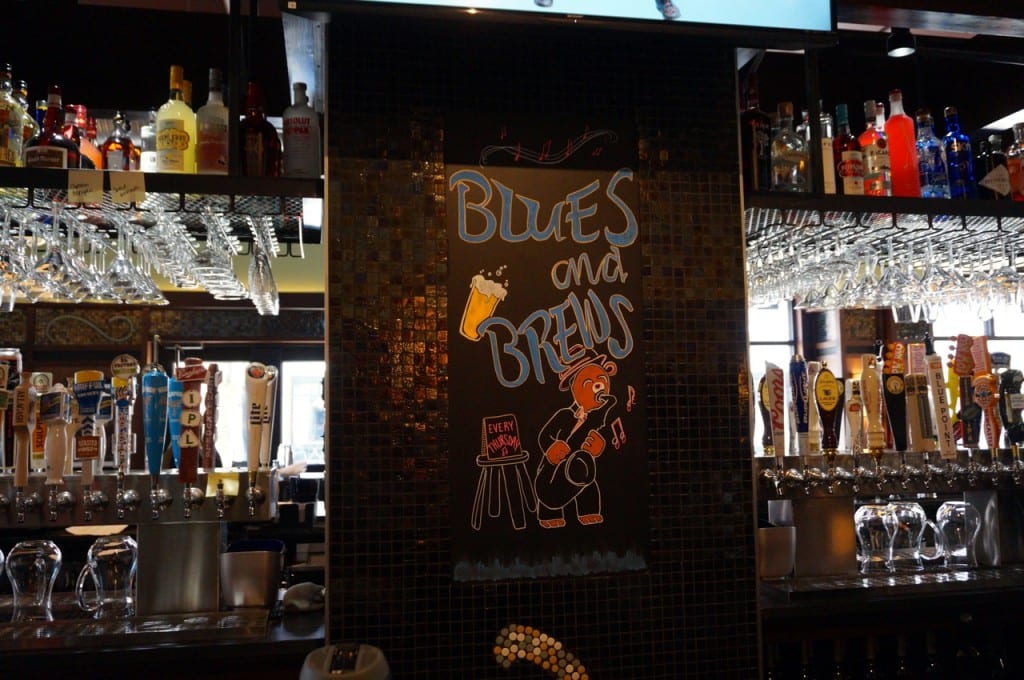 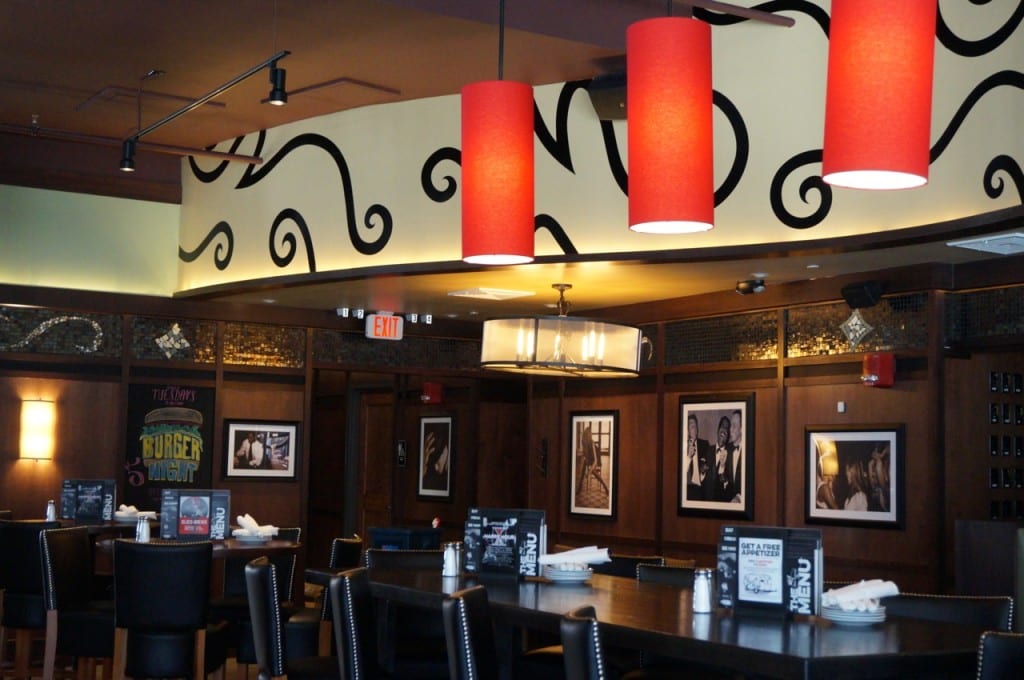 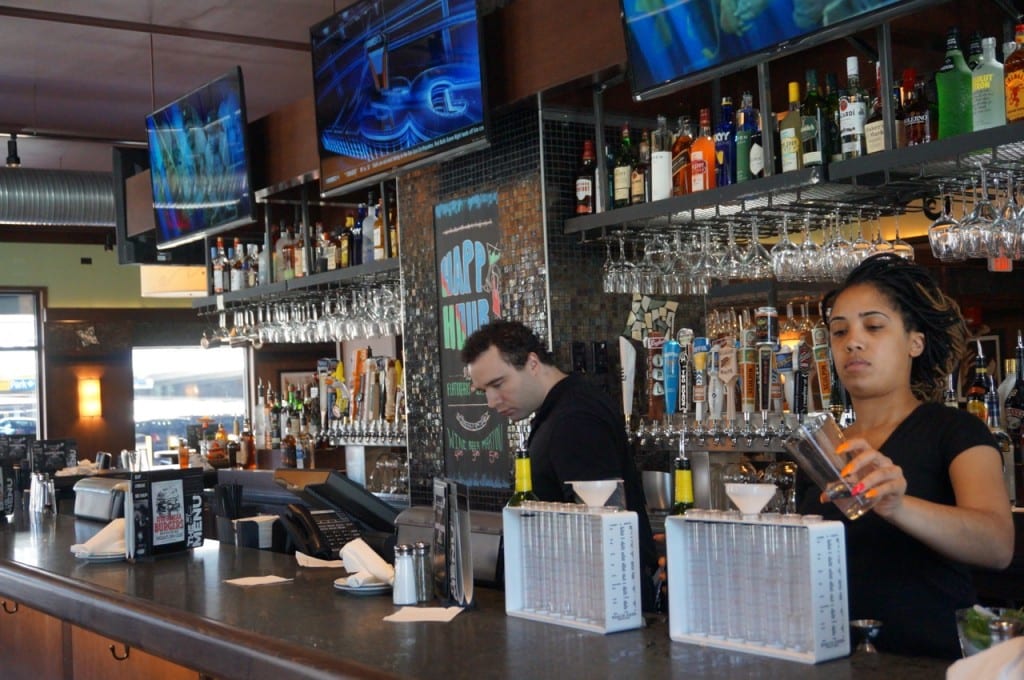 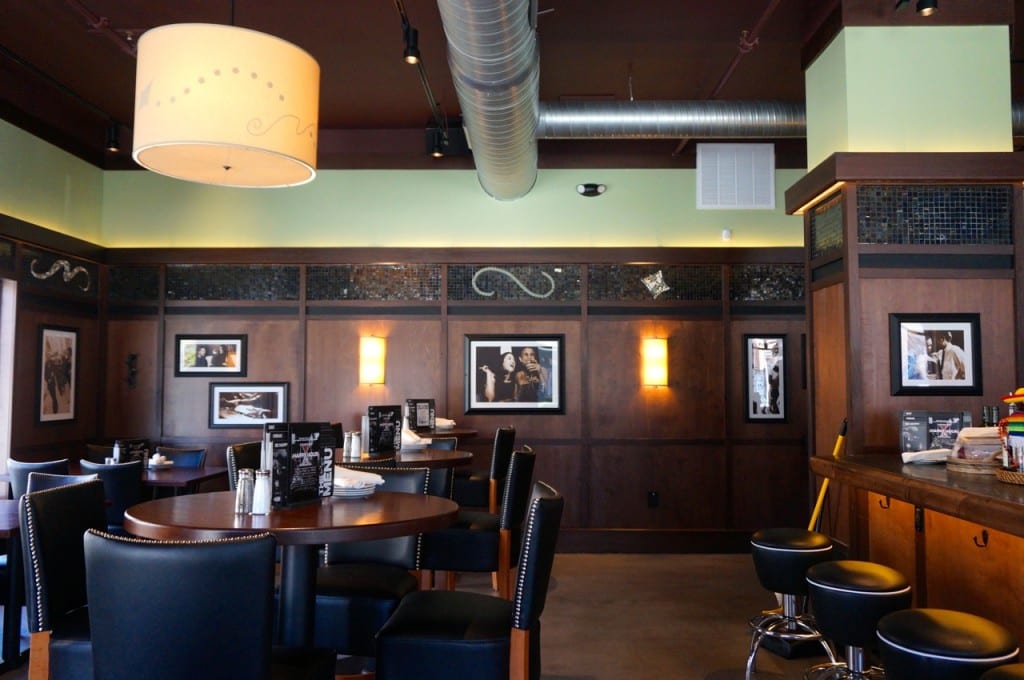 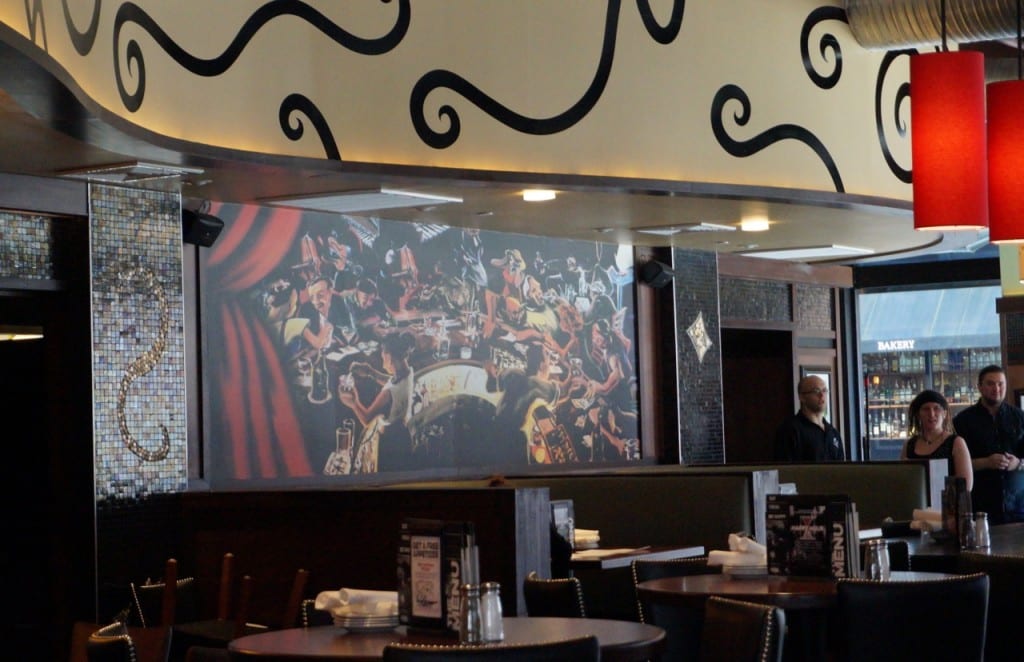 The mural is a feature in all Bar Louie locations. Photo credit: Ronni Newton 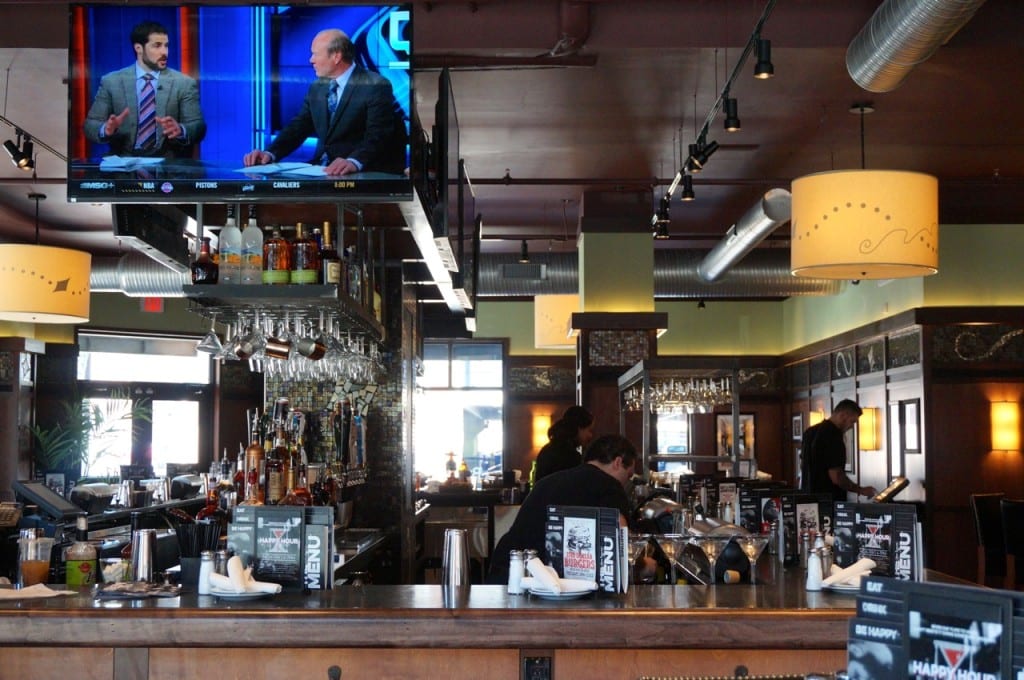 The bar is all set up with glasses waiting to be filled with Bar Louie’s signature martinis. Photo credit: Ronni Newton 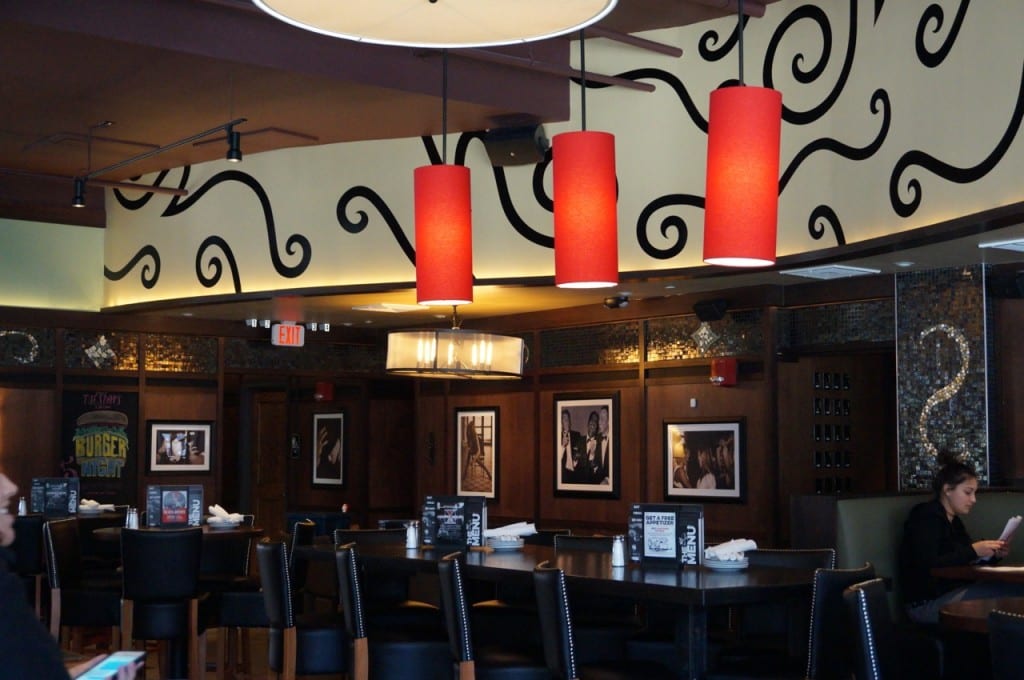 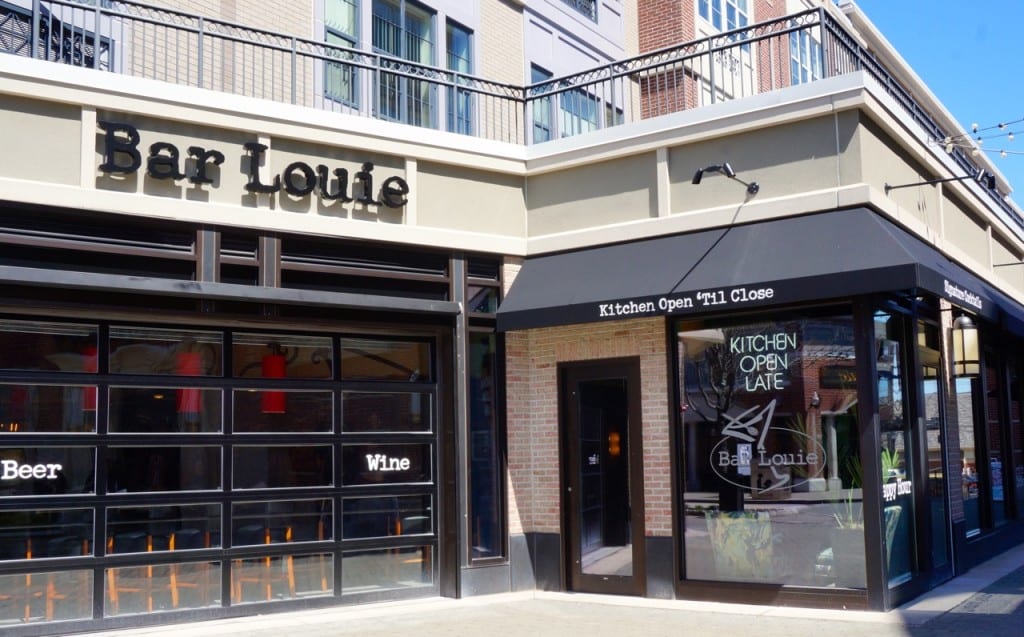 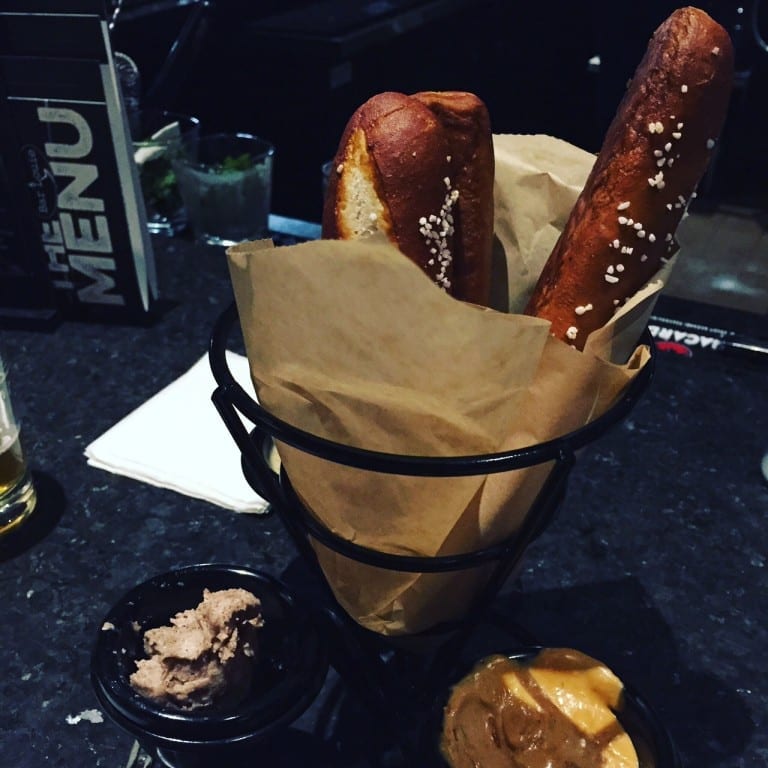 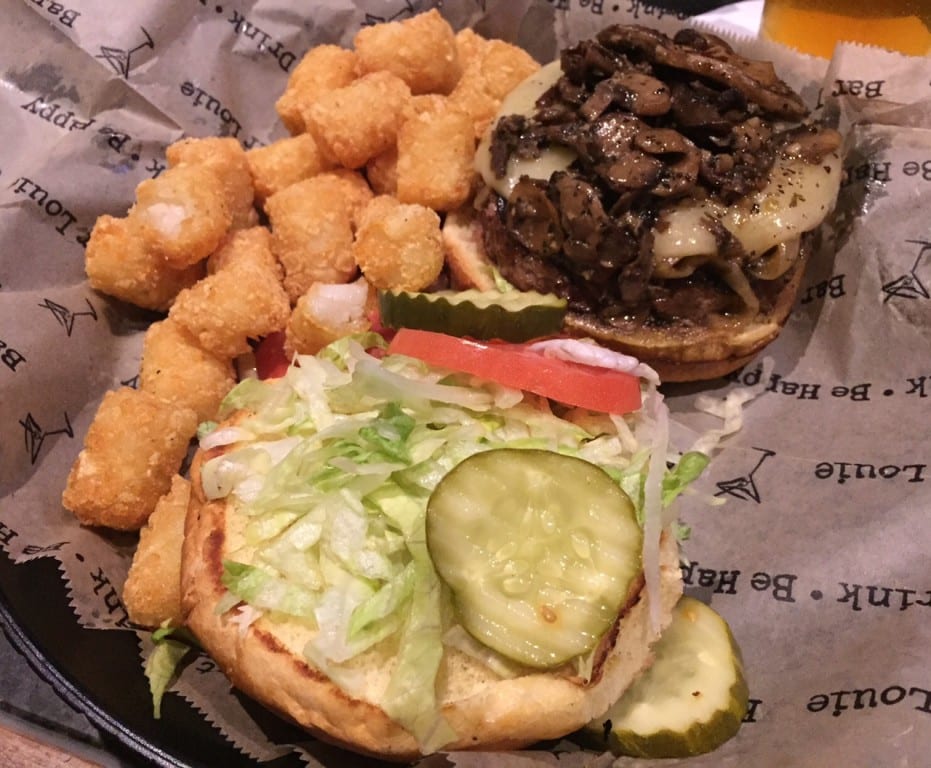 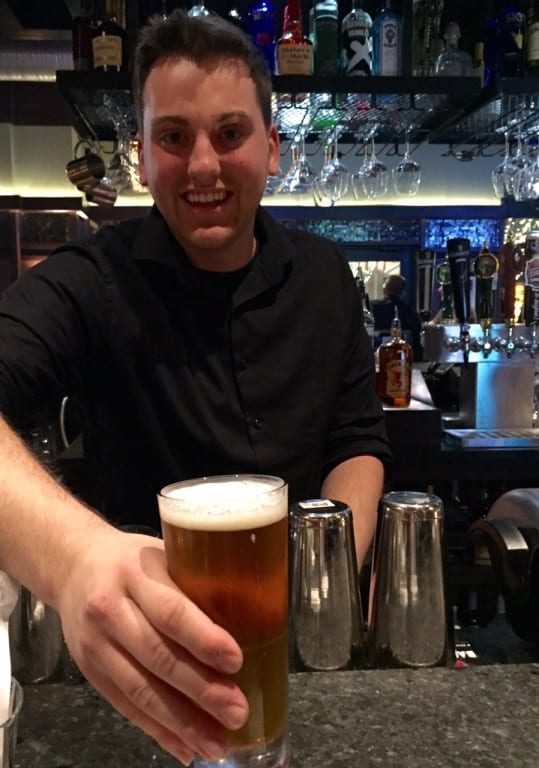 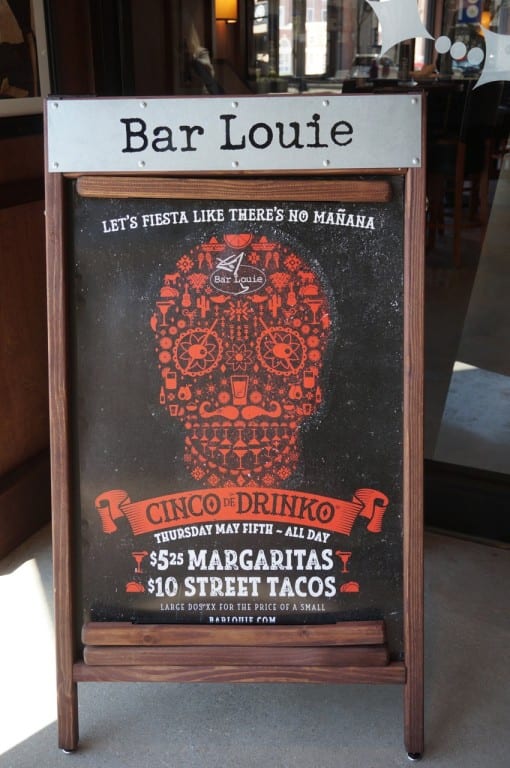 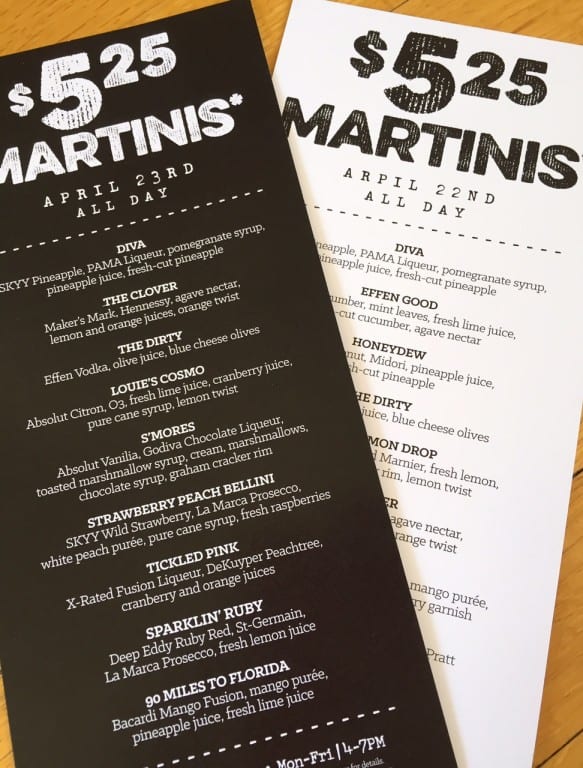 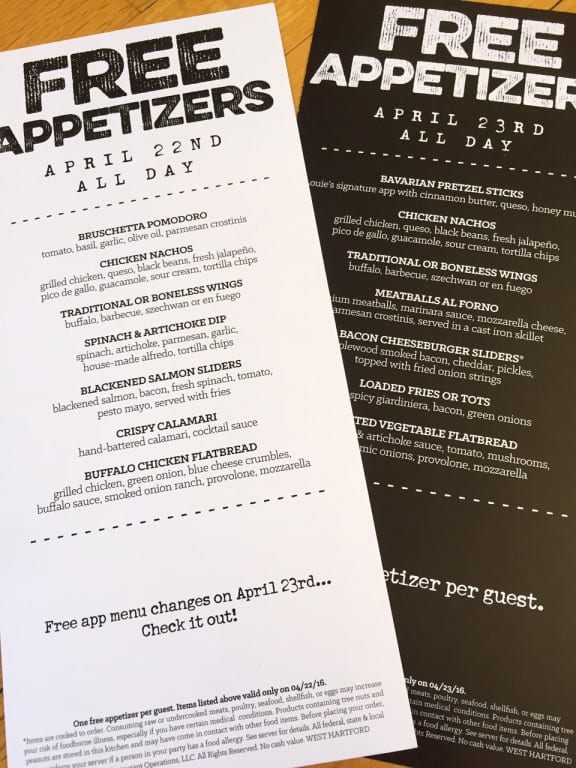