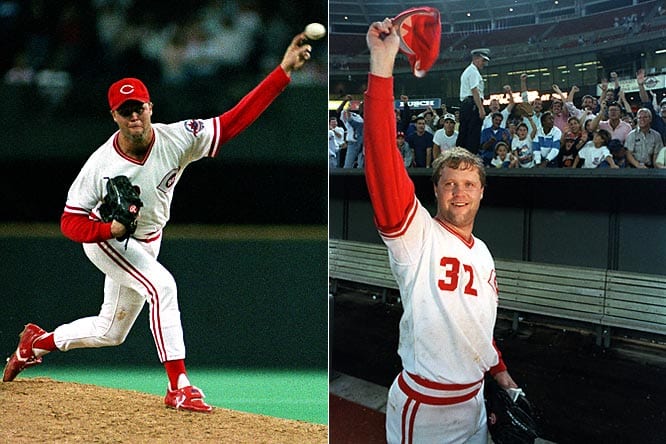 Tom Browning on the mound, and waving his cap after pitching a perfect game in September 1988. Courtesy image

Former Cincinnati Reds pitcher Tom Browning, who was the 12th Major League Baseball player ever to throw a perfect game, will be honored at the World Series Club in West Hartford on March 22.

To this day Tom Browning is proud to be among the elite – one of less than two dozen Major League Baseball (MLB) pitchers to throw a perfect game.

“It’s pretty cool,” he said in a phone interview Thursday from his Union, KY, home. “It was one of my best moments,” the former Cincinnati Reds southpaw said.

On Sept. 16, 1988, Browning threw 102 pitches, and retired 27 batters in a row. Not a single player from the LA Dodgers team touched the bases at the Reds’ Riverfront Stadium in Cincinnati. He became the 12th MLB player to ever throw a perfect game, and to this date there have only been 23 to achieve the feat. He’s the only one to ever do it in a Reds uniform.

“No one ever goes into a game thinking it’s going to happen,” Browning said. And no one said anything to him that day as he retired batter after batter.

During a game, no one talks to the pitcher between innings. Walking into the dugout, Browning said, “You’re like Moses parting the Red Sea.”

By about the seventh inning, Browning recalled, he started thinking about how things were going. “It was best to have done it against the Dodgers, our biggest rival,” he said. “But they went on to win the World Series so they got the last laugh.”

While Browning will likely speak about his perfect game at the World Series Club of Hartford’s dinner meeting on March 22, said he’ll also provide some inspiration to any kids who will be in attendance.

“It’s about being committed,” he said of a baseball career. “If you love it, and you’re wiling to put the work in you get the reward.”

Another message Browning said he will share: “Be the best teammate you can be.”

Like many baseball players, Browning is superstitious. Reports are that he wore “red underwear” whenever he pitched. For clarification, he said that they were red slider pants.

On the day of his perfect game he had watermelon at lunchtime. “You can bet I ate it the next time,” he said.

Browning played 12 years in the Major Leagues, nearly all of them with the Reds who drafted him in the ninth round in 1982. The highlight of his career, he said, was being a member of the 1990 World Series Champion Reds team that defeated the Oakland Athletics. He pitched game three of the Reds’ sweep of the series, and had a funny story to go along with it.

Browning’s wife was scheduled to give birth to their son any day, and went into labor during game two. Browning wasn’t slated to pitch that game, and left the ballpark to go to the hospital. In the days before everyone had a cellphone permanently attached to their bodies, no one could reach him easily at the hospital to call him back to the stadium to pitch when the game had gone into extra innings.

“I didn’t think they were calling looking for me [to pitch],” Browning recalled. He thought someone just wanted to update him on the game. His wife had already been given an epidural and Browning stayed at the hospital for the birth of his son, Tucker.

The next day he headed to Oakland with the team and then pitched for the win in game three of the four-game sweep.

Browning has plenty of other stories, and he’s shared many of them in “Tom Browning’s Tales from the Reds Dugout” which he co-authored with Dann Stupp in 2006. The book has been updated several times. “It’s neat to relive it, and share stories of what the Reds meant to me,” Browning said.

One of his favorite stories is about the time in 1993 he tried to climb up to the scoreboard at Wrigley Park in his uniform to wave to his boys. He couldn’t access the scoreboard and instead left the stadium and waved from a nearby rooftop. “I knew that would cost me,” he said, when he was caught by a TV camera. He paid the $500 fine. “I got a nice picture on my wall,” he said.

Browning suffered a serious injury in 1994, breaking his arm while throwing a pitch. He was never really able to come back from the injury, but coached for 11 years before retiring a few years ago.

Browning said he may write another book one day, and enjoys going on the speaking circuit, especially talking to kids.

For now he’s got another job that will keep him very busy. Just a few weeks ago he bought a sports bar, which he will call Brownings on York. It’s in Newport, KY, within view of Great American Ball Park, where the Reds now play. He’s filling it with Reds memorabilia, and his sons will run it. Tucker, his son who was born in the middle of the 1990 World Series, is the manager.

“Heck no,” Browning said when asked if he has experience running a bar or restaurant. But he said that it’s a great location, and he’s hoping people will stop in for “a cold one” on the way to or from Reds games.

Tickets to the World Series Club event can be purchased online. All tickets include a buffet dinner, meet and greet, autographs, and an opportunity for questions and answers. Tickets for those 18 and under are just $5.

And while a perfect game is rare at any level, a West Hartford lefty has already thrown one. Hall High School’s Chase Jeter did it on April 10, 2017, in an 8-0 victory over Rockville High School.