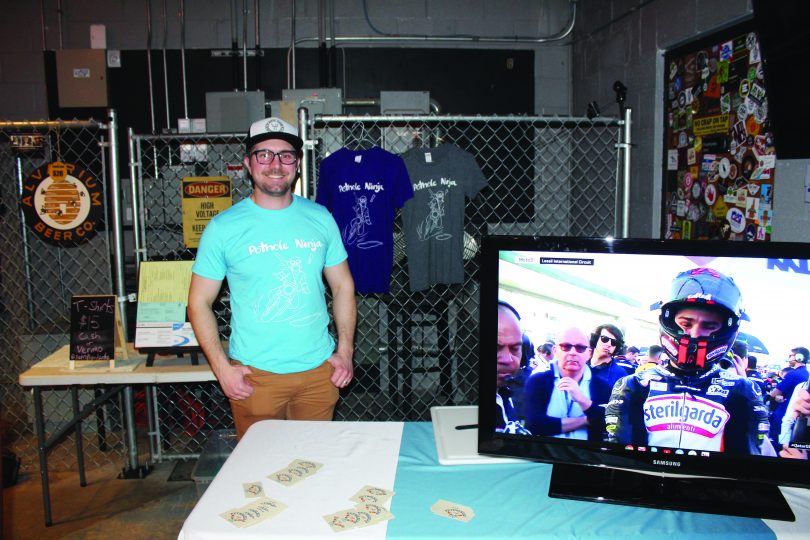 In the 10 years after he graduated from Conard High in 2006, Kyle Mayer lived in and around two of the coolest cities in the U.S.: Chicago and Austin.

Mayer, 30, has moved back to West Hartford with the hopes of being part of a movement to help Hartford come into its own as a vibrant city.

Toward that end, Mayer is looking to open his own motorsports-themed brewpub – Petrolhead Cafe – within the next year or two in downtown Hartford.

To get the concept off the ground, he launched his first pop-up event at Alvarium Beer Company in New Britain Sunday, March 10, at which he had a table set up with a television showing some races as he served brisket that he smoked in the brewery’s parking lot the night before.

The brewpub combines two of his passions – his love of motorsports and his desire to reinvigorate Hartford by offering a unique entertainment option.

“Hartford is home for me,” he said in an interview at Alvarium. “I moved away for 10 years for college. … But I still have a strong connection to Hartford. I have lots of friends and family and I have some roots here and I really want to see Hartford come into its own because it has so much potential.”

Not that he wants to turn Hartford into Austin or Chicago.

“A friend of mine said, ‘Would you like Hartford to be like Austin?’ I said ‘No. I want Hartford to be its own thing,’” he said. “I want it to be America’s hidden gem. Let Austin be Austin and I want Hartford to come into its own. I want to be a part of a movement of people to put Hartford on the map and be a national destination for businesses and for families and young people.

“It’s an interesting cycle what Hartford has gone through. It’s hard to pinpoint where things didn’t continue along that path. It’s going to require a movement of a lot of people to do the right things.”

Mayer believes part of that revitalization is offering a different place for fellow motorsports enthusiasts to enjoy a meal – breakfast, lunch, and dinner – or a beer, or just hang out.

“The concept is a communal space for motorsport enthusiasts,” he said. “I think it is a niche market I’m trying to access. It’s something I’m passionate about and it’s kind of a passion project of turning a hobby into a vocation.”

His favorite style is MotoGP, which is sort of like Formula 1 motorcycle racing. He said he fell in love with the sport attending his first race while out in the midwest (he attended Wheaton College in Illinois). But he said all kinds of motorsports would be featured at the brewpub, including Formula 1 and NASCAR to even more obscure racing such as rally car.

And while he served barbecue brisket at his first pop-up (which was extremely well-received), Mayer says he will serve different kinds of foods, including tacos and burgers.

In addition, he hopes to brew an inexpensive beer for patrons to enjoy, but he will also have fancier craft brews from other places available.

“I don’t want to be a brewery,” he said. “I want to brew an affordable option for people to have a nice beverage. I was visiting a San Francisco brewpub that serves a really delicious beer for $3 a pint that they serve in house. If that can be done in San Francisco – probably the most expensive city in the nation – and sell a pint for $3 then I can.

“In some ways I’m about competition and disrupting the market. There are a lot of delicious craft beers out there, but they can be kind of expensive when going out with friends and family. … I remember being in a place during the recession as a young adult, every $5 pint was like was, whoa. I want to make affordable options for everybody, That’s one of my goals. Yes we’ll have some fancy beers, but I’ll let other breweries brew those and I’ll buy them to sell them at my place.”

Ideally, Mayer, who is a residential property manager in Mansfield, will open a brick-and-mortar location within a year or two. For now he will be doing pop-up events, though none are scheduled at the moment.

“I hope to partner with other breweries such as New Park in West Hartford, Hog River, and others in Hartford,” he said. “There are different breweries in the area and organizations to participate in certain market events – not farmers markets, but things like the Know Good Market in Parkville, which is done once a month. I’d like to do a few of those this year.”

For more information visit petrolheadcafe.com or its Facebook page.