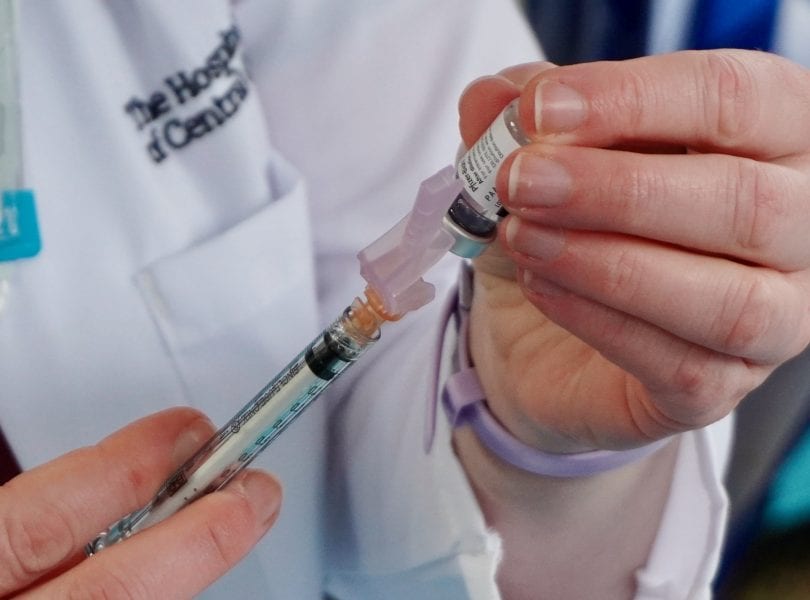 Over the weekend in West Hartford there were 16 new positive COVID-19 cases reported.

Federal regulators gave their long-awaited full approval to the Pfizer COVID-19 vaccine Monday, in a move Connecticut officials hope will promote vaccinations and reinforce a growing number of mandates by employers.

The U.S. Food and Drug administration endorsed the Pfizer-BioNTech formula for people 16 and older. Millions of Americans have been vaccinated since the FDA gave the shot an emergency authorization in December. It continues to be available for children as young as 12 under that authorization. But the Monday announcement marks a milestone in the pandemic as the first fully-sanctioned vaccine against the coronavirus.

In a press release, acting FDA Commissioner Dr. Janet Woodcock said the approval should give confidence to those residents who were still wary of the vaccine.

“While this and other vaccines have met the FDA’s rigorous, scientific standards for emergency use authorization, as the first FDA-approved COVID-19 vaccine, the public can be very confident that this vaccine meets the high standards for safety, effectiveness, and manufacturing quality the FDA requires of an approved product,” Woodcock said.

The formula’s full approval is expected to prompt more employers to require vaccination from their workers. The news was followed almost immediately by an announcement from New York City officials that its public school system would require the vaccine for all teachers and school staff.

“This is a game changing moment,” New York Mayor Bill de Blasio said during a press conference. “We’ve been waiting for this for a long time to have the full approval of the vaccine. We now have it. This helps us move forward and we’re moving forward with our schools with this new vaccine mandate.”

Meanwhile, the Defense Department announced Monday it would proceed with a vaccination requirement for military members, according to the Associated Press.

The FDA approval comes less than a week after Gov. Ned Lamont announced a vaccine requirement for Connecticut state employees as well as staff and teachers at public and private K-12 schools. Previously, Lamont issued an order requiring vaccination by nursing home employees.

Last month, the governor said an FDA blessing would make such mandates easier to impose.

“[Final approval] would make our lives a lot easier before anybody starts talking about mandates but if they can’t make up their minds, we’ll have to,” Lamont said in July. “I was going to wait but you can’t wait forever.”

Although the governor was among several officials urging regulators to make up their minds, Dr. Ayjay Kumar, chief clinical officer at Hartford HealthCare, told reporters Monday that the approval was expedited compared to the FDA’s traditional timeline.

Kumar said the approval should reassure the vaccine-hesitant population of the shot’s effectiveness and safety.

“I’m hoping it’s going to have a positive impact,” Kumar said. “It’s going to assist many of the private companies and many of the institutions who have mandated, to get to the goals of mandating vaccines for all the workers.”

U.S. Sen. Richard Blumenthal said the lengthy review of the vaccine should reduce any doubts. In a statement, Blumenthal praised Pfizer’s development team, some of which are located in Groton.

“I am tremendously proud of Pfizer’s scientists, researchers, and workforce – including many right here in Connecticut – who made this extraordinary scientific accomplishment possible,” Blumenthal said. “With one of the highest vaccination rates in the country, Connecticut is a standout example of how we can protect not only ourselves, but also our families, neighbors, and communities when we get vaccinated.”

The Moderna and Johnson & Johnson vaccines will continue to be available under their emergency authorizations. Kumar said he expected details about the full approval of the Moderna vaccine in late September or early October.

Pfizer’s approval comes as the more-transmissible Delta variant continues to fuel a surge in COVID cases and hospitalizations. Connecticut has felt the variant’s impact despite having one of the highest vaccination rates in the country.

As of Thursday, more than 2.2 million Connecticut residents were fully vaccinated. In West Hartford, 77.96% of all residents have received at least one shot.

Still hospitalizations have spiked. As of Monday, there were 369 COVID patients in Connecticut hospitals. The state added another 1,554 cases at an infection rate of 3.5%.

Kumar said, based on trends in the United Kingdom, he hoped Connecticut’s Delta surge would soon peak. In the meantime, he said coronavirus patients were generally unvaccinated and trending younger.

“Seventy – 74% of these people who are in the hospital with COVID are unvaccinated. Generally younger individuals who have some comorbidities but there’s a significant risk of mortality and suffering among those patients,” Kumar said. “With this new FDA approval, I’m hoping the rest of the community who’s not vaccinated will seek vaccination at this time.”