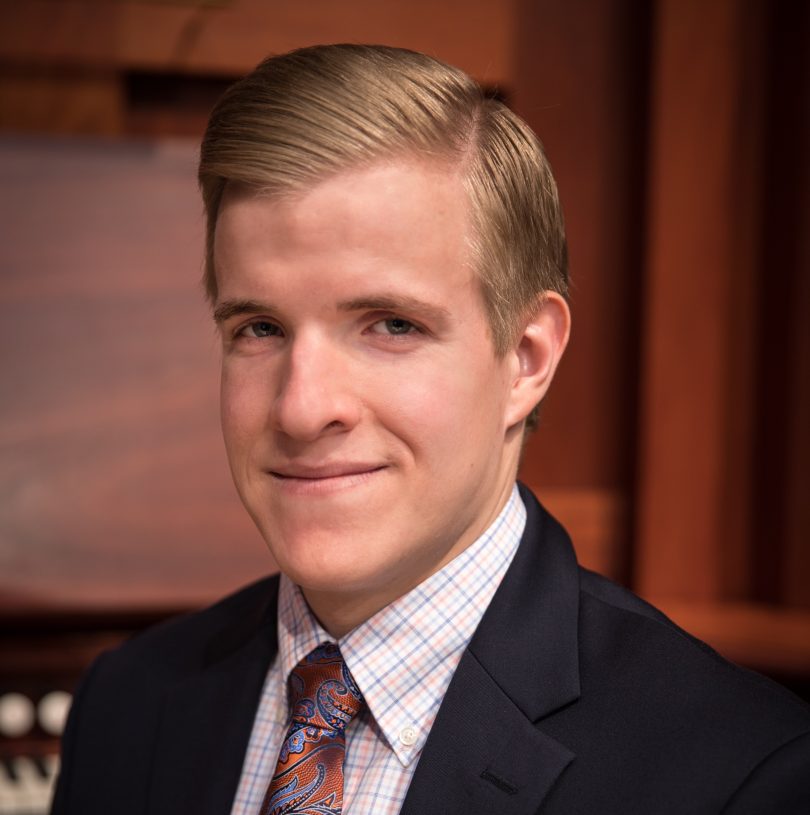 On Sunday, March 1, 2020, at 12:30 p.m., Music at the Red Door presents a performance by organist Grant Wareham. The concert is the third of the 2020 Pipes Alive! series of organ recitals by regional artists performing on the celebrated Austin pipe organ at St John’s Episcopal Church, 679 Farmington Avenue (near Prospect), in West Hartford. Admission is free for this half-hour event.

Named by Diapason magazine in 2019 as one of “20 under 30” extraordinarily talented young organists, Wareham has already earned a string of honors and awards, including winning the First Prize and Audience Prize at the 2017 Albert Schweitzer Organ Competition in Hartford, CT, and being selected as a semifinalist in the 2019 edition of the internationally-prestigious Longwood International Organ Competition. Now pursuing the Master of Music degree at Yale University Institute of Sacred Music and School of Music, Grant also serves as organist and choirmaster for the Episcopal Church at Yale, and organ scholar at Christ Church New Haven.

Inaugurated in 2015, the Pipes Alive! concerts take place on the first Sunday of each month from January through June, and draw enthusiastic audiences to hear the region’s finest organists play on one of the most versatile pipe organs in the area.

“The marvelous pipe organ at St John’s was built by Hartford-based Austin Organs, and serves not only the church and its congregation, but the whole community,” said Scott Lamlein, artistic director of music at the Red Door and director of music and organist for St. John’s. “Through this series of free recitals, we welcome everyone to experience the amazing sonic experience of a pipe organ in live performance.”

The pipe organ at St. John’s Episcopal Church, known as Austin’s Opus 2761, resounds with 51 stops, 64 ranks, and 3,721 pipes. Since its installation in 1995, this remarkable instrument has been featured often in concert, providing opportunities to share with the greater community the beauty and triumph of organ music.

Each year, Music at the Red Door presents dozens of musical and cultural events, including the Pipes Alive! organ series; choral and chamber music concerts; guest choirs and ensembles; and special events such as the annual Lessons and Carols service and an annual choral concert, Choral Music for the Soul. Visit reddoormusic.org for event details and more information.

The 2020 Pipes Alive! series presents a free half-hour organ recital on the first Sunday of each month from January through June. The remaining programs are as follows:

Admission is free to all events presented by Music at the Red Door; free-will donations in any amount are accepted at the door.