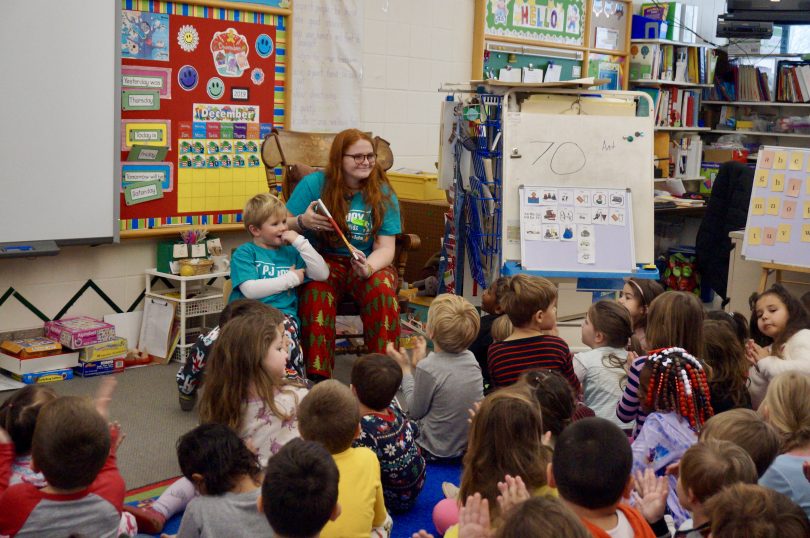 Hall student Rylie Dagnall, with her brother, Cooper, sitting by her side, reads "The Practically Perfect Pajamas" to kindergartners at Whiting Lane on PJ Day for the Kids in December 2019. Photo credit: Ronni Newton (we-ha.com file photo)

West Hartford Public Schools students, teachers, and administrators donated money to Connecticut Children’s Medical Center and in exchange got to wear their pajamas for the day. 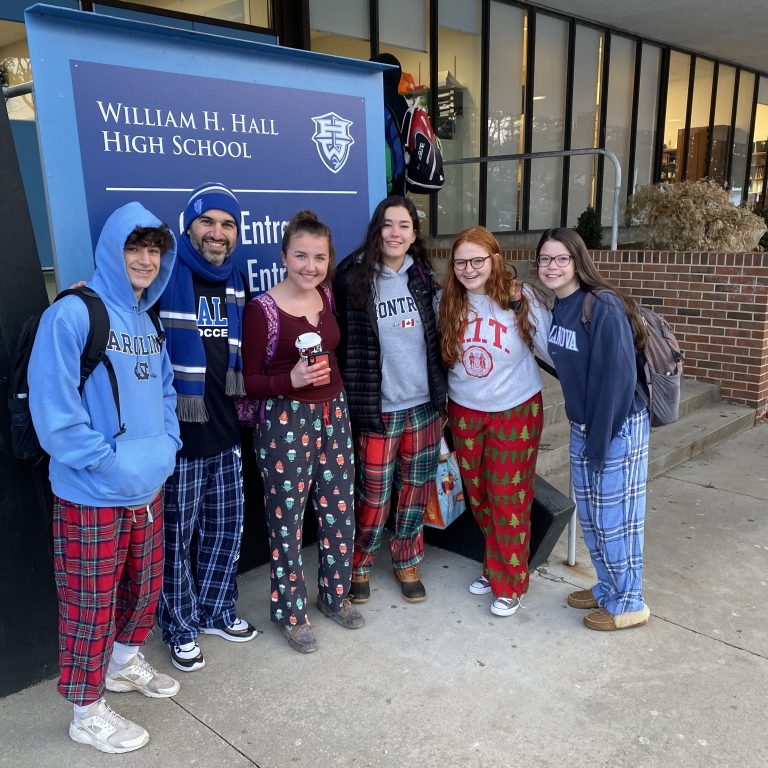 Hall Principal Dan Zittoun (second from left) and students on PJ Day for the Kids at Hall High School. Rylie Dagnall, who coordinated the event, is second from right. Courtesy photo

Friday the 13th was a wonderful day in West Hartford.

A day that some may associate with “bad luck” was instead a day when students, teachers, and administrators came to school dressed in flannel and fleece, their feet perhaps clad in fuzzy slippers – attire generally more appropriate for a slumber party than a normal school/work day – while raising money and as a way to show solidarity with patients who wear PJs all day, every day. 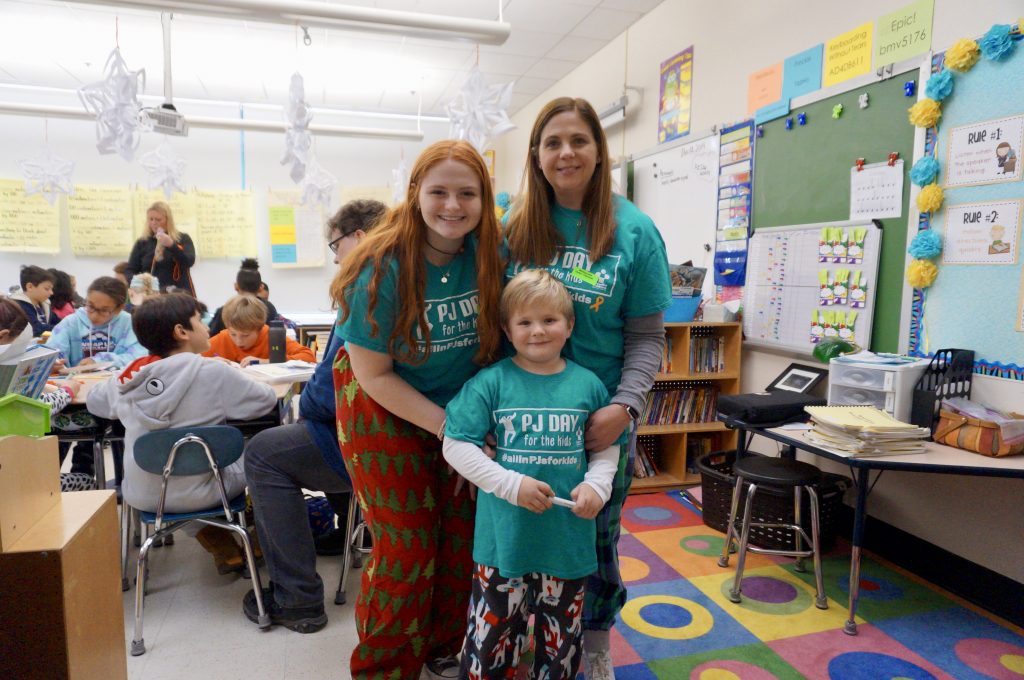 For many in West Hartford, the “privilege” of dressing in pajamas to school or work on Dec. 13 was accompanied by a donation to PJ Day for the Kids, a fundraiser for Connecticut Children’s Medical Center now in its ninth year.

In 2014 Hall High School junior Rylie Dagnall organized West Hartford Public Schools’ first PJ Day for the Kids fundraiser at King Philip Middle School, where she was a student at the time.

When Dagnall was 6, at the end of kindergarten at Whiting Lane Elementary School, she was diagnosed with acute lymphoblastic leukemia and began a lengthy regimen of chemotherapy. She missed the end of her kindergarten year, and much of first grade as well, but was happy to have many good friends who visited her at Connecticut Children’s Medical Center.

On Dec. 13, Dagnall was back in that very same kindergarten classroom, this time reading them “Chasing the Snowman” and “The Practically Perfect Pajamas.”

Her brother, Cooper, now a kindergartner at Whiting Lane, sat on Dagnall’s lap as she read.

“It’s crazy because I was diagnosed when I was in that room, but it’s so nice to read to them,” said Dagnall.

Junior year in high school is “really crazy,” said Dagnall, but she’s healthy and continuing to support Connecticut Children’s as she has done since the early days of her illness.

While getting treatment at Connecticut Children’s, and through attending the Hole in the Wall Camp, Dagnall met Nick and Charlotte Wesoloskie of Coventry. Charlotte had been diagnosed with cancer when she was three days old, and her older brother Nick started PJ Day in 2011, as a way to help his sister and to be in solidarity with the kids in the hospital who wear their pajamas all day, every day.

This year Dagnall raised money at Hall – totaling about $1,500 – and also recently hosted a booth for PJ Day during lunchtime at Aetna’s office building in Hartford. She encouraged employees at local Starbucks and Dunkin’ Donuts shops to also wear PJs and participate in the fundraiser. 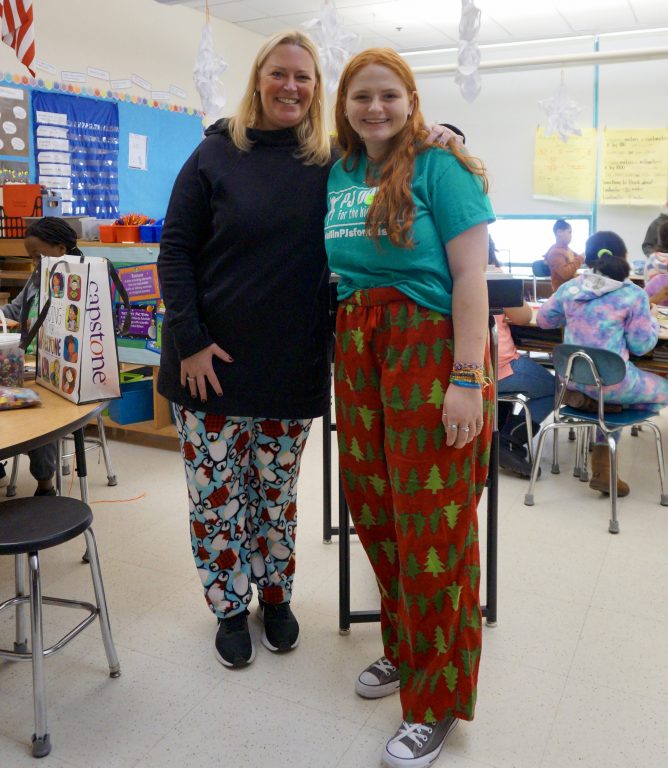 “I love it,” said Karen Bridges, now a fifth grade teacher at Whiting Lane. She was Dagnall’s fourth grade teacher, and was amazed at the young woman her former student has become.

Hall math teacher Laura Nichols, whose son was given a room on the oncology floor at Connecticut Children’s years ago when he had surgery, worked to expand the PJ Day fundraiser to all West Hartford Public Schools three years ago, as a way to focus on doing something positive and giving back.

“PJ Day was a really exciting day for me. Our building was filled with more energy than on previous PJ Days, and we had more teachers and students in PJs this year than in prior years,” said Nichols. In 2016, the first year of the fundraiser at Hall, there were several students but just two teachers who wore PJs, and they raised $175.

“This year we raised over $1,500 on Friday alone,” said Nichols. “We had teachers showing the PJ Day video to their classes and talking about childhood cancer to raise awareness. We had more teachers who wore their PJs to school than those who didn’t! And there was just a ton more energy overall among both students and staff this year.”

According to Amy Shaffer, Hall’s student activities coordinator who helped Nichols and Dagnell with the fundraiser this year, West Hartford Youth Soccer donated $250, West Hartford Youth Football donated $100, and West Hartford hockey donated $100. “We collected over $650 at the Hall/Conard football game and will be collecting donations through the end of the month at Hall boys and girls basketball and hockey games,” Shaffer said.

Other donors included the Hall boys soccer which donated $250, and one of the Hall teachers held a Smash Brothers tournament and raised $125. Team Unified raised $100 for PJ Day. “These teachers initiated this and I didn’t even know they were holding these events. We’ve also received a greater total of online donations so far this year than we have in the past,” said Nichols.

“Her energy and enthusiasm led to us raise funds beyond the walls of Hall on Dec. 13,” Nichols said of Shaffer.

At Duffy, where Kiley Sullivan is now a fifth grader, a successful movie night was held this year to raise funds for PJ Day. Kiley was diagnosed with the rare childhood cancer Alveolar Rhabdomyosarcoma just two weeks after her fifth birthday in April 2014, when she was still a pre-schooler. She spent countless days at Connecticut Children’s Medical Center receiving treatment.

“The fact that PJ Day is becoming well-known throughout the West Hartford Public Schools community, and raising pediatric cancer awareness of students and their families is as encouraging as the funds we’re raising,” Nichols said.  “Of the 169 towns in Connecticut, I believe all but 18 had at least once school participate in PJ Day this year. My hope is that more and more schools will continue to reach past the one-day event of PJ Day each December, and the funds raised will continue to grow each year.

“Last year, we were the top fundraising school district and I believe we will be again this year. … I am so proud to be a both a parent and a teacher in this incredibly generous community,” said Nichols.

To donate to the West Hartford Public Schools team for PJ Day for the Kids, click here.

Jon Scher, director of West Hartford’s Lollipop Tree Nursery School, also held a PJ Day for the Kids fundraiser as well as a toy drive for Connecticut Children’s. The toy drive has been going on for years, but this is the first year the school has added the PJ Day fundraiser, which was in honor of Dagnall as well as alumnus Cooper Weigel.

“We hope all children are happy & healthy, but we are extremely thankful to have a highly regarded and recognized teaching hospital close by for those times when our little ones need an extra healing hand,” Scher said.

“Joining together with other schools from around the state, we wrapped up our week of giving by wearing our PJs showing our support for patients who have no choice, but to wear their PJs as they fight cancer and undergo treatment for prolonged periods of time,” said Scher. 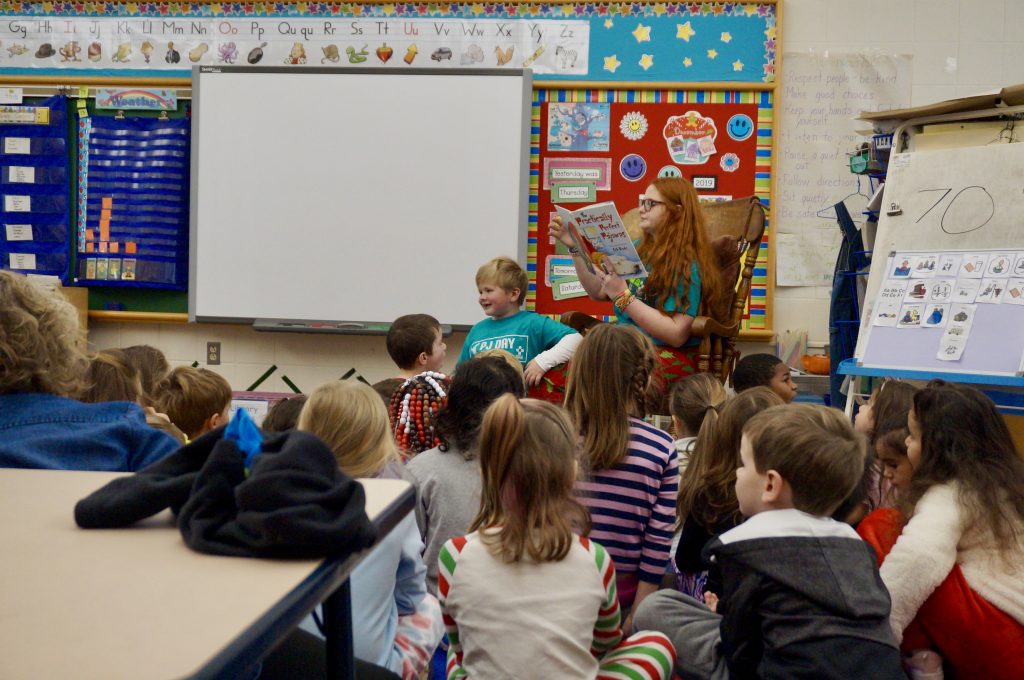 Rylie Dagnell, with her brother, Cooper, sitting by her side, reads “The Practically Perfect Pajamas” to kindergartners at Whiting Lane on PJ Day for the Kids. Photo credit: Ronni Newton 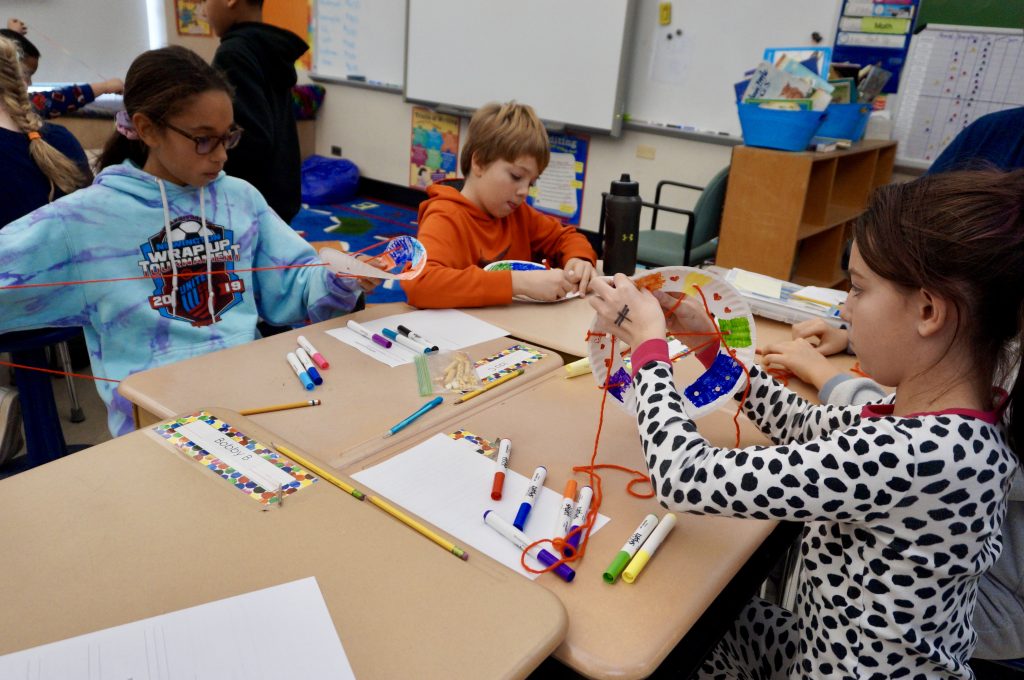 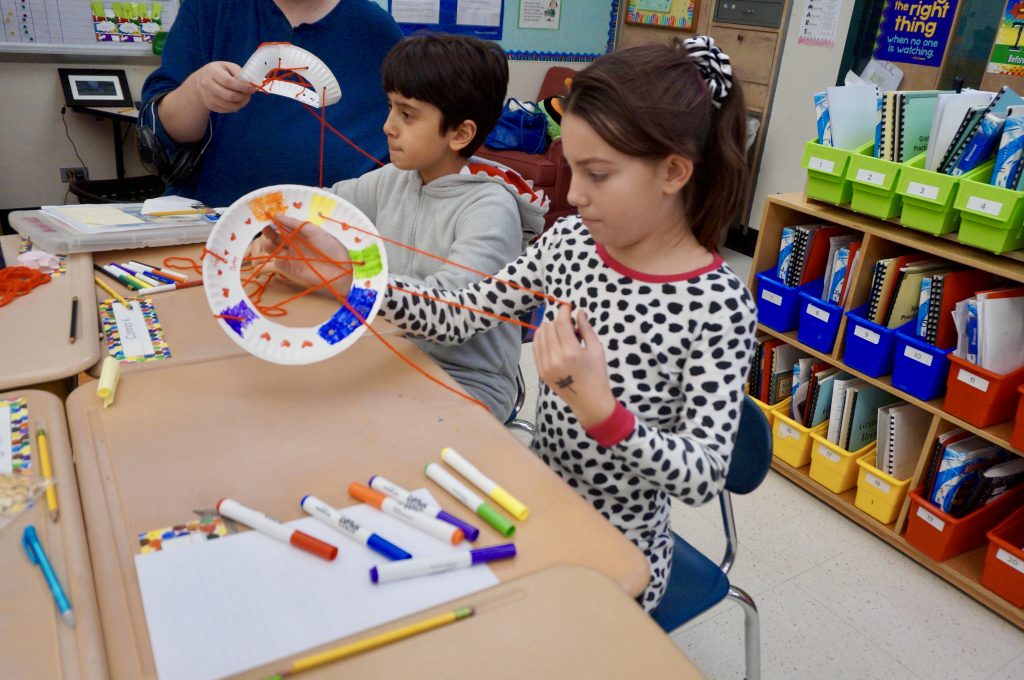 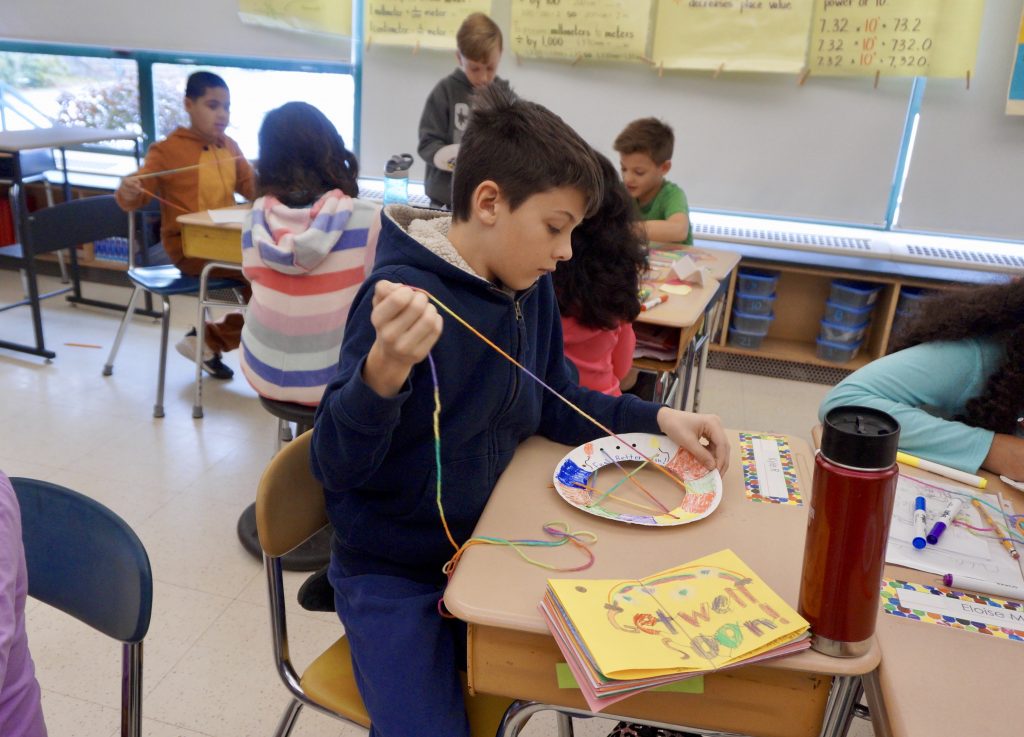 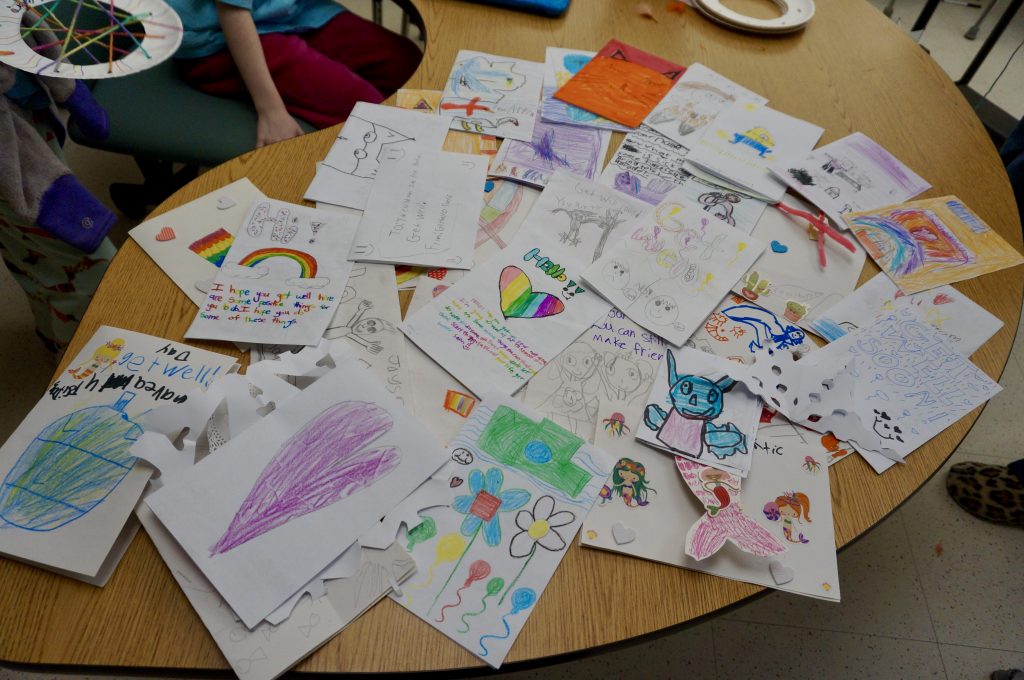 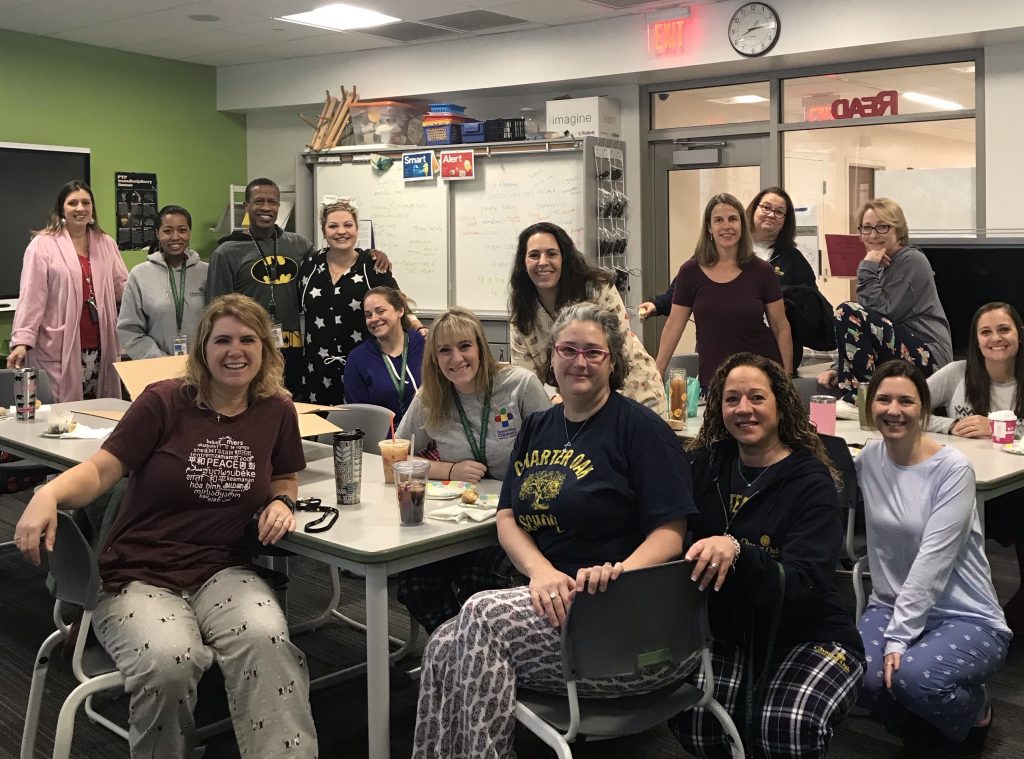 Teachers in their pajamas on PJ Day for the Kids at Charter Oak International Academy. Courtesy photo 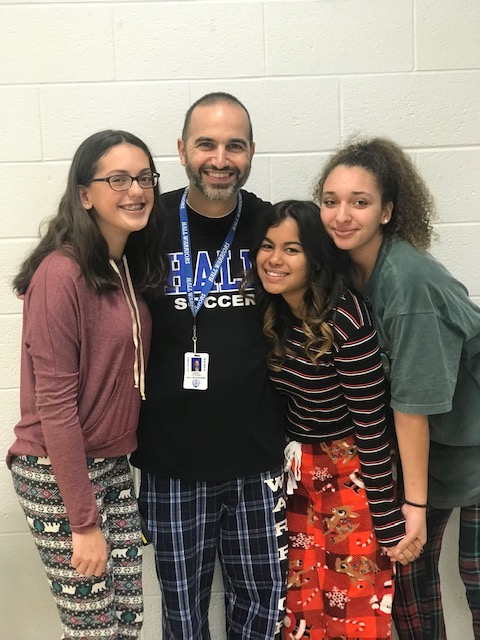 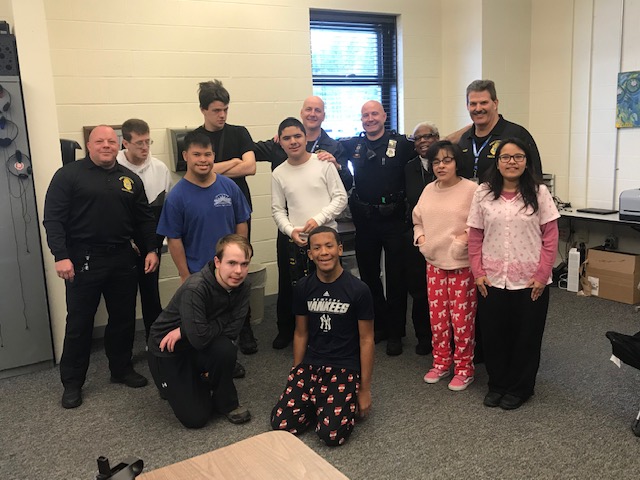 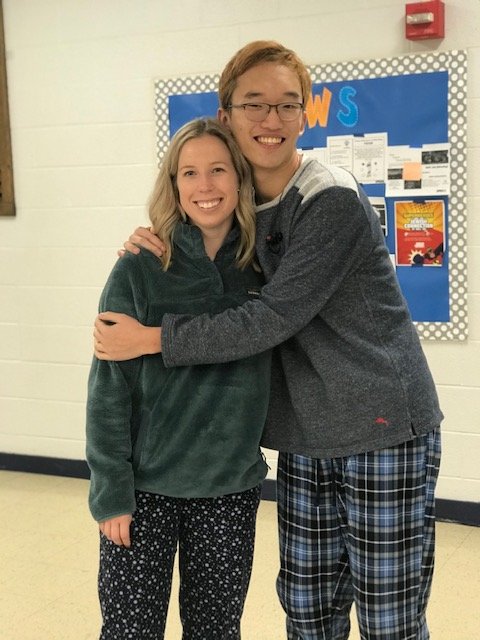 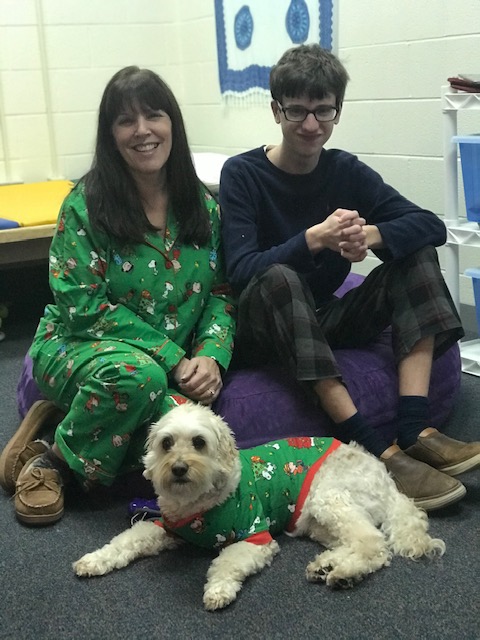 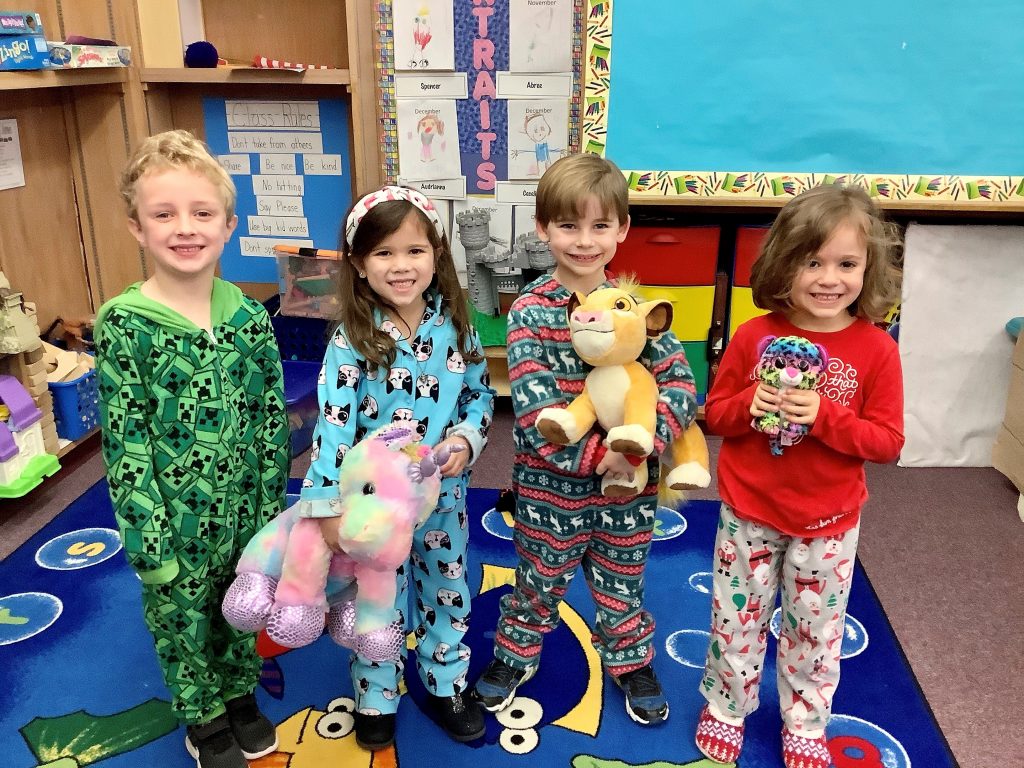 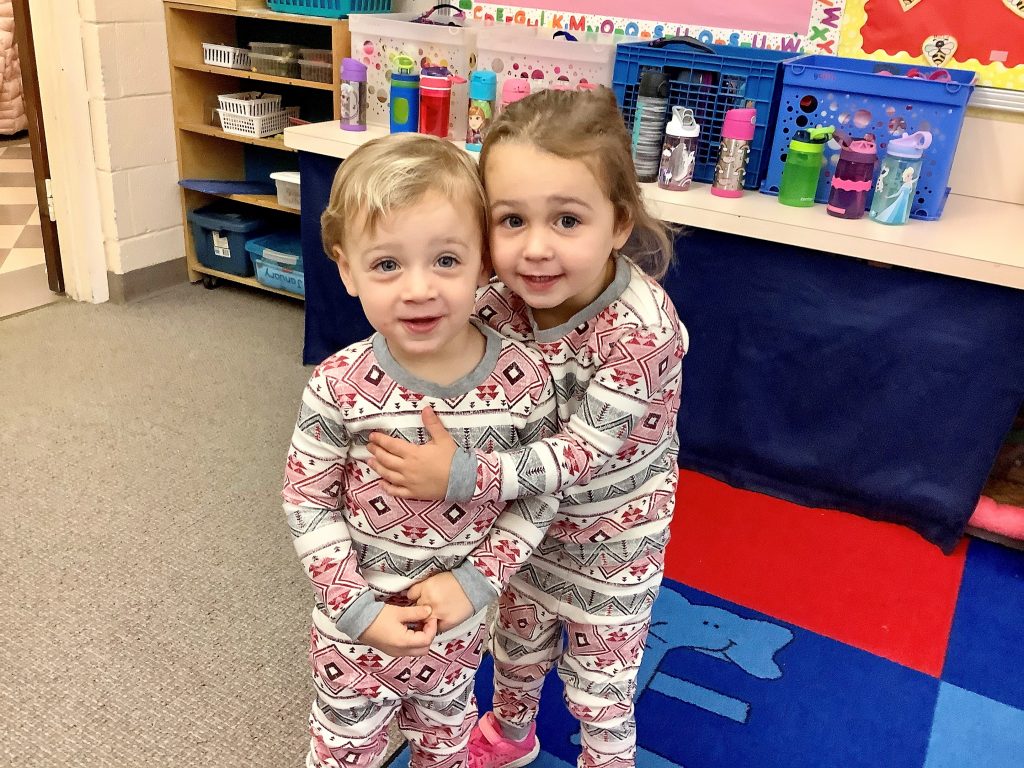 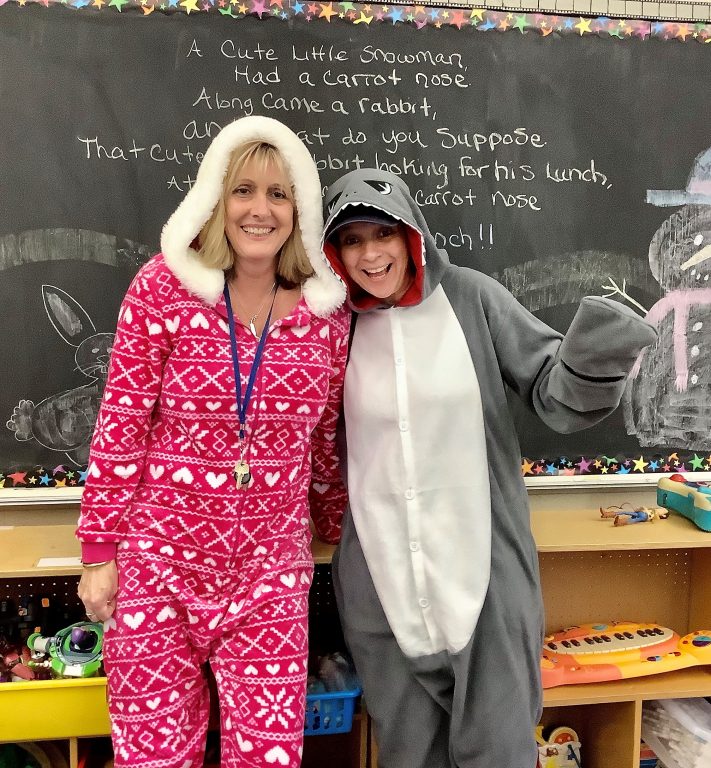 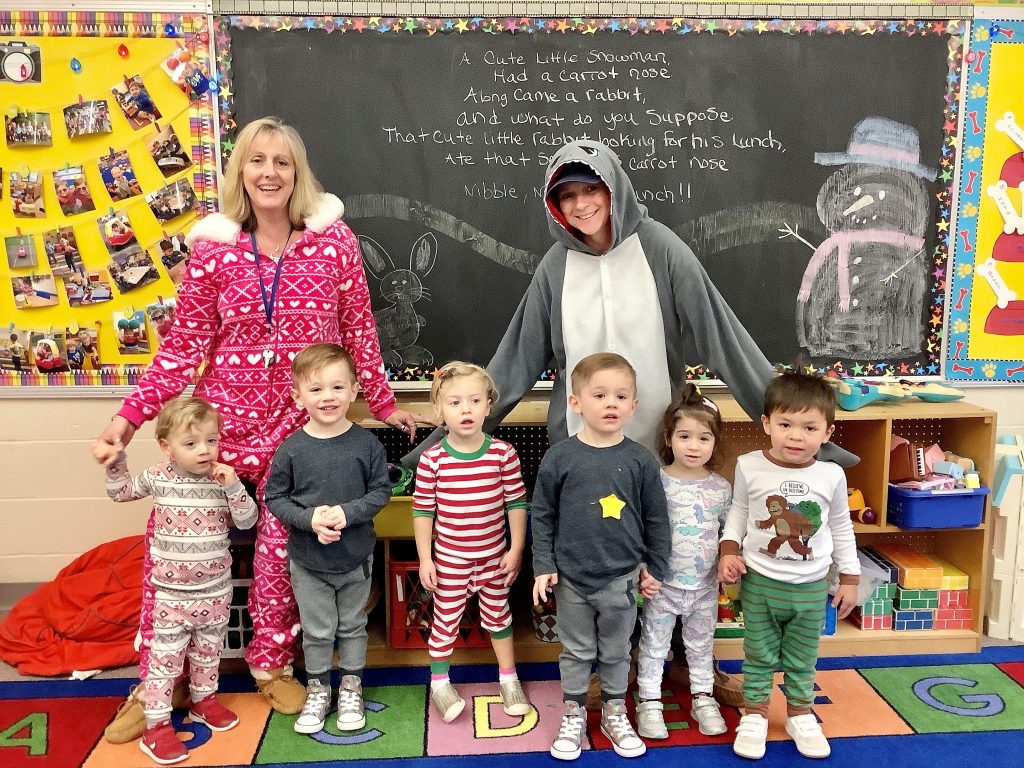