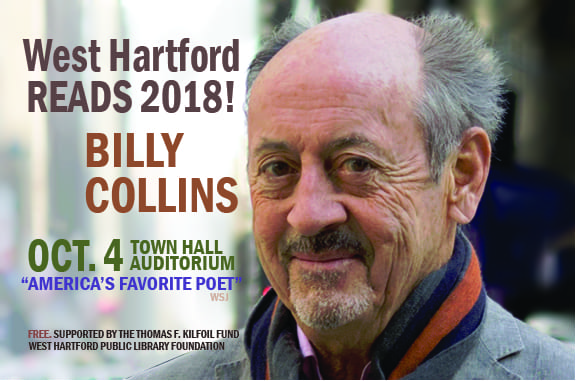 Five poets laureate discuss the books of poet Billy Collins as a lead up to Collins’ free appearance at West Hartford Town Hall this fall.

Future discussions will be held on the following dates and feature the books listed below:

Register for the book discussions by visiting http://bit.ly/billycollins4oct.

Collins, who has written 12 books of poetry, was United States Poet Laureate from 2001-2003, and was also named New York State Poet Laureate 2004-2006. He is a former Distinguished Professor of English at Lehman College of the City University of New York. In 2016 he was elected a member of the American Academy of Arts & Letters.

West Hartford READS, established in 2016, is a town-wide initiative which encourages everyone to read the selected books of one notable author. Previous West Hartford READS authors are Richard Russo, Anna Quindlen, and Luis Alberto Urrea.

All book discussions are held in the Noah Webster Library, 20 South Main St., West Hartford. Seating is limited. Please call the library at 860-561-6990 for more information.