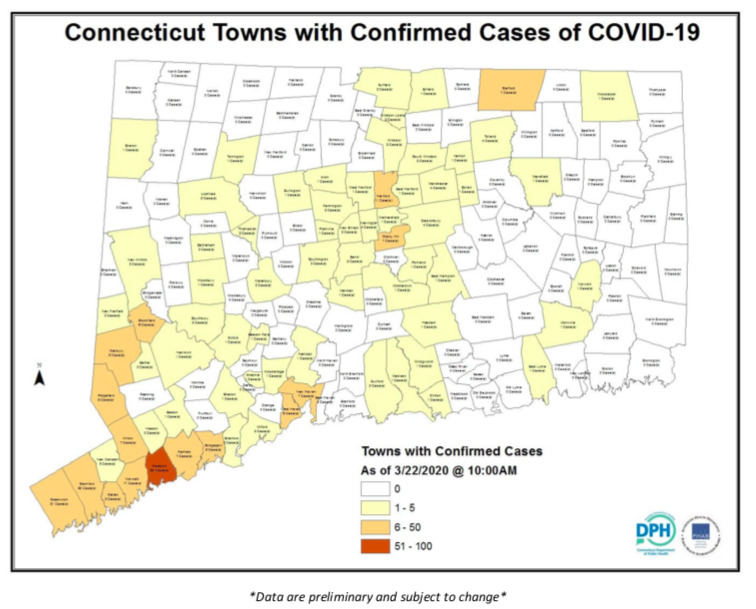 Westport has the most cases with 62 as of March 22. Courtesy Connecticut Department of Public Health 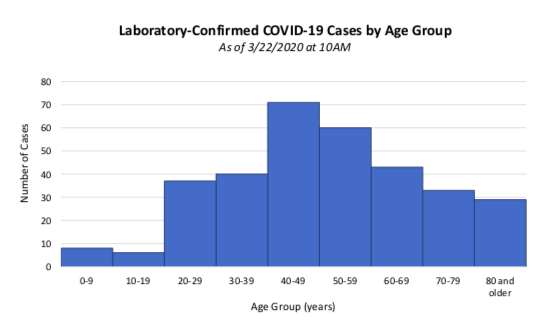 The state released age-related data for the first time that shows middle-aged people, ages 40 to 60, comprise the most COVID-19 cases in Connecticut so far. Courtesy Connecticut Department of Public Health

Another 104 Connecticut residents were reported to have the COVID-19 coronavirus Sunday – the single-largest one-day jump since the outbreak began – and three have more died, including a second resident of a Stafford Springs nursing home.

The new confirmed cases, announced by Gov. Ned Lamont’s office Sunday night, bring the statewide totals to 327 cases and eight deaths since the outbreak began. In addition, approximately 51 people have been hospitalized with COVID-19.

Also Sunday, for the first time, the administration released a bar chart showing residents ages 40-to-49 and 50-to-59 comprise nearly 40% of all coronavirus cases, outranking the state’s seniors. Connecticut’s children had, by far, the fewest cases to date.

Total deaths, which grew by three on Sunday, included:

The surge in Sunday’s tally of confirmed cases coincides with the significant expansion of testing in Connecticut. Only about 20 tests were being conducted daily a little more than a week ago, about 500 test results were recorded on Sunday alone.

To date, more than 3,600 tests have been conducted in Connecticut among both state and private laboratories.

The Lamont administration released age-related data for the first time, but only in the form of a bar chart. The precise numbers that were used to create the chart were not immediately available late Sunday night.

But the graphic broke Connecticut’s population into deciles by age. The 40-to-49 group had the most confirmed cases, with about 70, while age 50-to-59 ranked second with about 60 cases.

Seniors came next, with the age 70-to-79 decile having less than 35 cases while those age 80 and older had just under 30 cases.

Children and teens ages 10-to-19 have recorded the fewest cases to date, with less than 10, with kids from birth-to-9 nearly matching them and also falling below 10.

Lamont takes to the phones to combat coronavirus

Lamont also on Sunday urged residents to sign up for cell phone alerts about the coronavirus crisis.

The governor delivered a recorded message to more than four million phone numbers through the state’s CTAlert system. He also posted that message on social media, urging residents to stay home.

The governor said trips to pharmacies, grocery stores, and takeout restaurants are fine — so long as you keep your distance, and provided you’re not over 70 years old. He’s also advising those who can work from home to do so.

New Haven Mayor Justin Elicker was among those who praised Lamont’s messaging Sunday.

“I think it’s a very strong step in the right direction of pushing people to stay at home and not interact with each other.”

Elicker said Lamont’s executive orders are on top of his own orders to reduce the number of people gathering together.

New Haven officials say they now have 12 verified positive cases of COVID-19 – including one case of a 10-year-old who is hospitalized in stable condition. The city also reported a second case of a man experiencing homelessness who left Yale New Haven Hospital without clearance from medical staff. The city said the man was later found Sunday and returned to the hospital.

In a press conference Sunday, New Haven Mayor Justin Elicker said he is increasingly concerned about the surge of cases that may be coming. He said a few days ago he was concerned about Italy and South Korea. Now he’s talking about New York City.

“I’m terrified to think about what we’re going to look like in seven days,” Elicker said, adding that while he doesn’t want the public to panic, he wants people to be informed and understand the severity of the situation. “And I tend to lean towards always being as honest as possible with my assessment of where we’re going. And I think it’s not a good place.”

Elicker said the discussion has progressed from understanding the problem, to learning about social distancing, and, now, to dealing with the growth in positive cases.

“One of the components that I feel that we need to do much work on and know that the hospital is thinking and working very hard on is this: How to address what we anticipate will be pretty bad scenarios with the overrun of our healthcare systems as we’ve seen in many other places.

Lamont’s order of last week isn’t a full lockdown. He’s advising those who can stay at home to do so. That said, Elicker and his staff are nevertheless reiterating guidance to restaurants on how to best care for themselves and their customers – specifically recommending curbside delivery for takeout orders. Elicker is also asking residents with appropriate surgical masks to donate them to healthcare facilities.

A report from Connecticut Public Radio is included in this story.