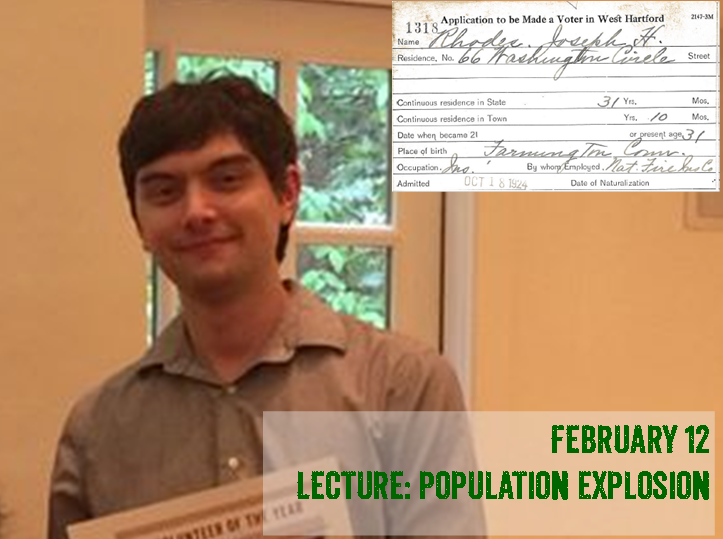 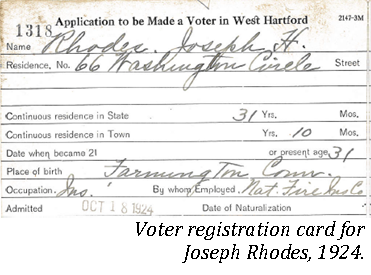 ‘Application to be Made a Voter in West Hartford’ from 1924. Courtesy image

During a 21-year timeframe in the 20th century, the population of West Hartford nearly quadrupled, increasing from about 9,000 residents to 34,000 residents.

He will also share some of the interesting tales he learned as he explored demographic trends.

As part of his research, Murray studied and created a useful database out of 29,000 voter registration records that the town provided to the museum in 2015.

Each “Application to be Made a Voter in West Hartford” record from the period in between the end of World War I and the start of World War II – 1920-1941 – included gender, occupation, place of birth, and other information from which conclusions can be drawn about the evolution of the town from a farming community to a thriving suburb and the largest town in New England.

Stories have emerged about people who contributed to the town in a variety of ways – ranging from domestic servants from some of the town’s mansions, to masons and other tradesmen, to insurance industry executives and female entrepreneurs.

It began as a “little project” that Murray, as a volunteer researcher, offered to undertake, but inputting the data and organizing it into a usable format took about two years.

“The result of Jeff’s research gives insight into both the broader economic and cultural changes in West Hartford and also individual stories of interest. Jeff uncovered people born at sea or hiding their true identities and even cases where the F.B.I. got involved,” the museum states in a release announcing the Feb. 12 program.

Murray, a West Hartford native and data analyst at Pratt and Whitney, has been involved with the museum since he was a high school student and won the Meyer Prize for his essay on local history, and has volunteered as a researcher for a variety of programs, including the West Hartford House Tour and West Hartford Hauntings. He was named Volunteer of the Year in 2018.

The program will include an opportunity for attendees to ask questions.

The Feb. 12 event is free for members, with a $5 donation suggested for non-members. Space is limited and reservations can be made online here.

For information on the museum’s extensive school and public programs, visit www.noahwebsterhouse.org or call 860-521-5362.