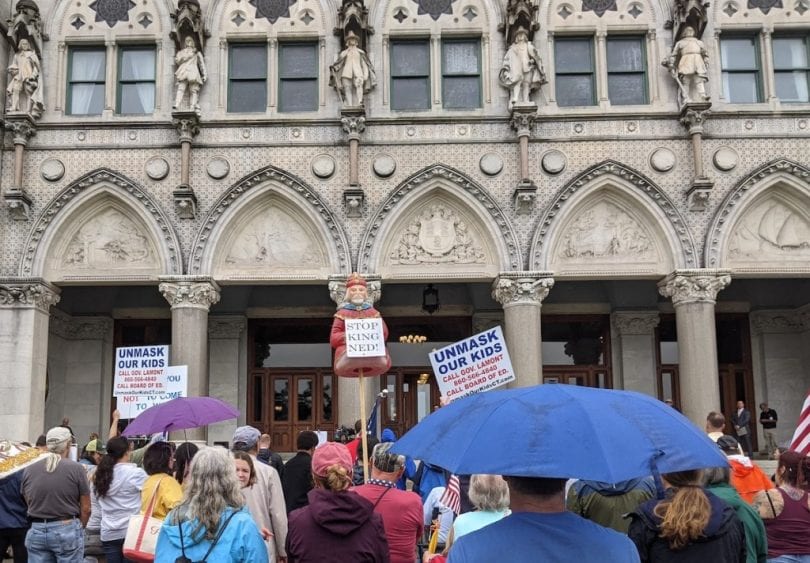 An estimated 250 protestors gathered Monday calling for the legislature not to extend the governor’s emergency powers.

Opponents of Gov. Ned Lamont’s ongoing emergency authority rallied in the rain outside the state Capitol building Monday, calling on the legislature to reject the governor’s request for an extension which lawmakers are expected to consider Wednesday.

Lamont, who since last March has been governing with increased authority to manage the coronavirus pandemic, has asked lawmakers to extend two emergency declarations until the end September allowing him to continue 11 ongoing executive orders past their scheduled expiration date next week.

The crowd that gathered on the North steps of the Capitol building demanded the legislature reject the governor’s extension. Capitol police estimated the group at around 250 people.

“It’s over, Ned,” Patrick Sasser, a conservative organizer and founder of No Tolls CT, said. “And shame on the Democrats come Wednesday if they vote to continue his extension.”

“We should not have to gather here like this to plea to them to take a king out of office,” Sasser said later. “The emergency is over.”

In a five-page letter last week, Lamont said the orders he is looking to extend allow the state to continue qualifying for federal emergency funds, manage vaccination clinics, set rules for school COVID policies, and give tenants more time to qualify for assistance if they are behind on their rent.

“I will continue to exercise the authorities attendant to these declarations in a judicious fashion and in a spirit of consultation and cooperation,” Lamont wrote last week.

Democrats in the House and Senate have signaled they plan to approve the request, which will extend the emergency declarations for about two months instead of the 180 days allowed under a bill passed by the legislature this year.

However, opponents at Monday’s rally pointed often to Connecticut’s COVID infection rates which have remained below 1% for weeks.

“The emergency is over. COVID is contained. There is no good justification to continue this declaration,” Rep. Mark Anderson, R-Granby, told the crowd.

Responding to critics at the rally, House Majority Leader Jason Rojas said the governor’s ongoing authority will be limited. Rojas said Lamont has been restrained in his use of executive orders, having already eliminated most of the 300 he had issued at the height of the pandemic. He said the rally was a political exercise.

“Obviously, my Republican colleagues think this is a winner for them,” Rojas said. “But it’s certainly not us giving away our authority. There is no King Ned Lamont. I think all of that is just bluster and rhetoric but that’s okay. People have a right to express themselves.” 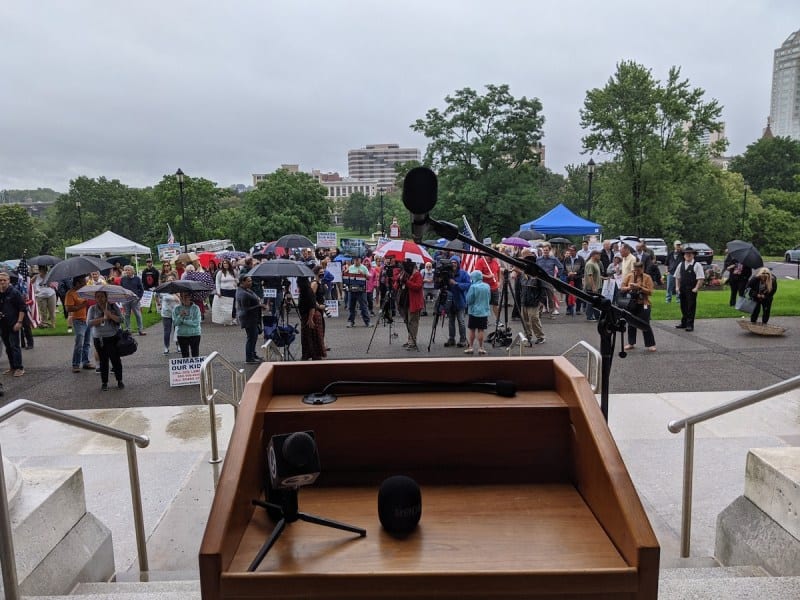 Lamont was referred to frequently as a monarch by many of the speakers who spoke at the rally. And although several Republican lawmakers addressed the crowd and pledged to vote against the extension during a special legislative session Wednesday, some speakers and members of the crowd expressed a pronounced distrust of both government and elected officials.

“They are people who forget their values and their ideology and their idealism when they get elected to office because – look at this monstrosity behind them,” Todd Feinburg, afternoon host on WTIC, said motioning at the Capitol building.

“A lot of people don’t recognize themselves that much after they’ve been there a long time,” he said, while a handful of Republican lawmakers watched nearby. “Just don’t trust them, okay?”

According to the National Academy for State Health Policy, 26 of 50 states still had some sort of COVID emergency order in place as of June 28. There were emergency orders in place in states with politics skewing in both directions. However, most of the Northeast region has let emergency orders expire with the exception of Connecticut and Rhode Island.