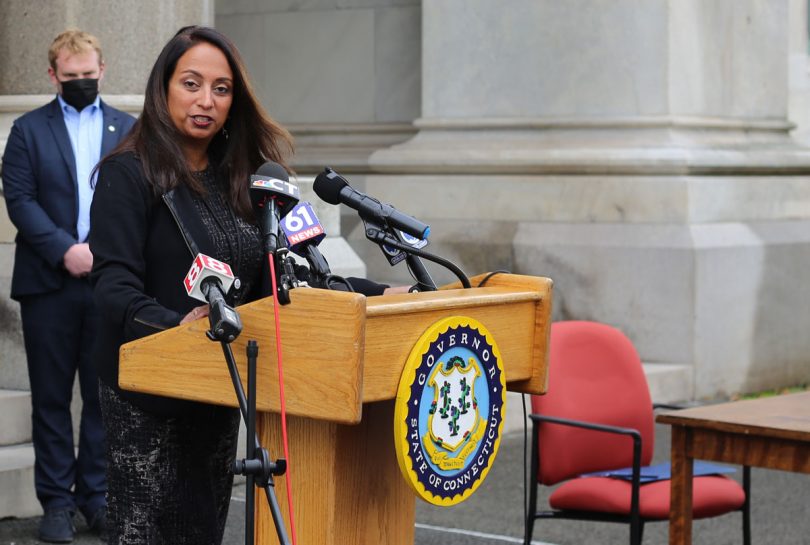 West Hartford, like nearly every other town in the state, is at the ‘red alert’ level, and the average daily case rate per 100,000 population rose to 32.9 this week. 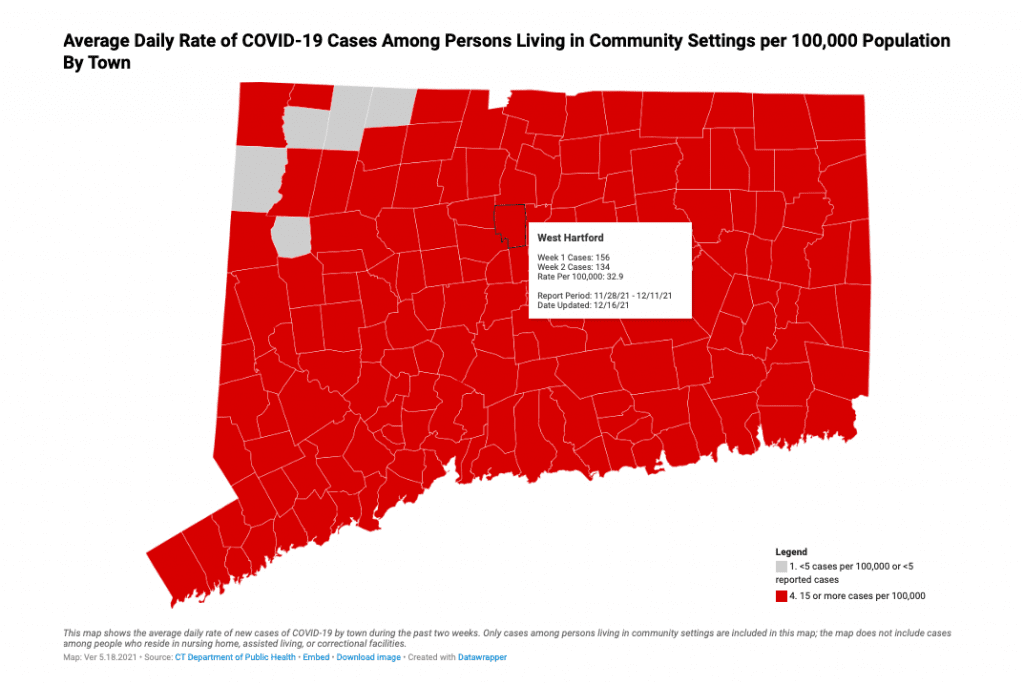 Reported cases of COVID-19’s omicron variant in Connecticut jumped to 40 on Thursday, a steep increase of an infectious strain which public health officials predict may be the dominant form within the next few weeks.

The Public Health Department released the figure as part of its weekly COVID update, which also reported another 56 deaths, pushing Connecticut past a bleak 9,000 deaths since the pandemic began. The infection rate remained roughly steady at 7.14%. The new omicron cases reflected a sharp increase in prevalence over last Thursday when there were just two reported cases of the new variant in Connecticut.

During an unrelated press conference, Public Health Commissioner Manisha Juthani said the experiences of other countries like South Africa and the United Kingdom, where the strain has been present longer, suggest the variant will take hold quickly here.

“This variant is highly infectious and it is moving rapidly throughout our state, throughout the country,” Juthani said. “With some predictions that are out there, I won’t be surprised at all if in another week, two weeks, it’s roughly 50% of what’s circulating and in a month it could be the dominant strain overall.”

Although the variant’s increased transmissibility is expected to drive a surge in cases, it remains to be seen what impact it will have on the severity of cases here. At the moment, the number of people hospitalized in Connecticut with the virus remains elevated and well over double where it was just a month ago.

Although hospitalizations fell by six on Thursday, down to 710, Juthani said the trend was worrying.

“What I can tell you is that hospitalizations have been rising,” Juthani said. “They’ve been rising at a rate that is concerning to me and we’re watching it very, very closely.”

The commissioner, an infectious disease doctor formerly at the Yale School of Medicine in New Haven, said the state’s health care system was feeling the strain of the rising COVID cases which have compounded other consequences of the pandemic.

“We have staffing issues because health care workers have been working really hard for almost two years,” she said. “We have issues related to mental health in our communities and people needing to be in the hospital for those issues and then we have medical and surgical problems that are coming to a head for many people because they were sitting on the sidelines, afraid of this virus. So we have a community that is in need of health care and we’re seeing it at multiple levels.”

As of Thursday, all but five of Connecticut’s 169 towns (Canaan, Colebrook, Norfolk, Sharon, and Warren) were reporting “red alert” level infection rates of 15 or more cases per 100,000.

The surge in cases may have contributed to a modest increase in the number of residents getting vaccines and booster shots. Over the past week, another 31,000 Connecticut residents became fully vaccinated against the virus for a total of around 2.5 million people. Meanwhile, another 106,000 residents received booster shots.

While rising cases in neighboring Rhode Island led that state’s governor to announce a renewed indoor mask mandate beginning Monday, Gov. Ned Lamont said he had no plans to issue any new sweeping COVID restrictions in Connecticut. He said he doubted residents would accept such mandates.

Some individual towns in the state have mask mandates, and in West Hartford, Town Manager Matt Hart announced that a universal indoor mask mandate will go into effect on Monday for all municipal buildings.

“Right now there’s no need to do that,” Lamont said. “We have capacity in our hospitals and people are doing the right thing.”

The governor pointed to rising vaccination rates among 5- to 11-year-old children, which as of Thursday increased to around 30%. He said Connecticut residents are taking appropriate actions without government mandates.