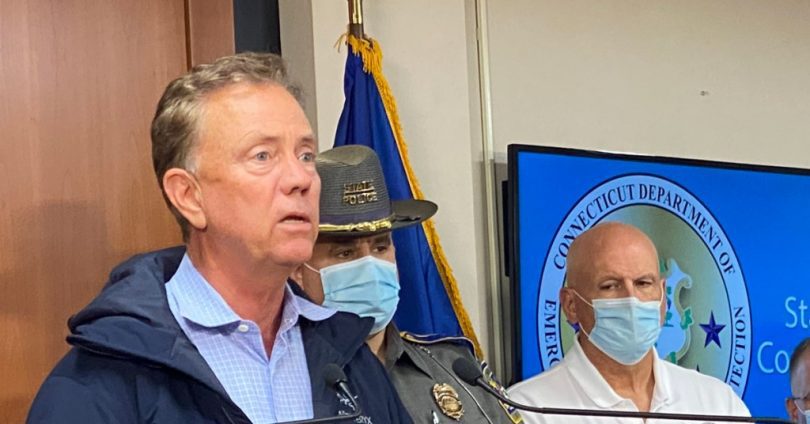 By 4 p.m. Monday there were fewer than 2,000 Eversource customers in Connecticut without power, and West Hartford was 100% restored.

As the remnants of Tropical Storm Henri moved out of Connecticut on Sunday, Gov. Ned Lamont expressed confidence that electricity would be restored to over 90% of the 29,000 state residents without power by Monday at 6 p.m.

Lamont’s confidence in the utilities Sunday was a far cry from his comments last August, when Tropical Storm Isaias knocked out power to 750,000 customers and left some in the dark for over a week. The failure to adequately prepare for that storm by the state’s two largest utility companies, Eversouce and United Illuminating, was addressed by the bipartisan passage of legislation designed to hold electricity providers accountable for lengthy outages.

The passage of that law, called the Take Back Our Grid Act, was followed by an eight-month investigation by the Public Utility Regulatory Authority into the preparations made for Isaias by Eversouce and United Illuminating. Following the investigation, PURA ordered a $30-million penalty against Eversource and a $2.1 million penalty against UI, with $28.4 million of Eversource’s penalty to be returned to ratepayers in the form of credits, and a similar return of $1.8 million to ratepayers by UI.

According to PURA Chair Marissa P. Gillett, the utilities have until the end of this month to begin returning those fines in the form of monthly bill credits back to customers for a period of one year, distributed on the basis of a customer’s monthly kWh usage.

Gillett said Eversource and UI have each appealed the remaining fines to Superior Court.

With all that in the recent past, Connecticut residents and their elected leaders in Hartford had collectively held their breath this weekend following Eversource’s prediction of outages for hundreds of thousands of customers lasting eight to 21 days as the storm intensified into a Category 1 hurricane. It’s forecasted path had it heading directly across central Connecticut.

However, Henri steered eastward and was downgraded to a tropical storm as it made landfall in Westerly, Rhode Island on Sunday, sparing the western half of Connecticut from the worst of the wind and rain.

Around mid-afternoon Sunday, Rhode Island reported 75,000 customers without electricity while Connecticut was hovering just over 29,000, with most of those customers concentrated in the eastern half of the state.

United Illuminating’s customers were spared from significant outages and by around 10 p.m. the company, with its service area along the state’s shoreline, had restored power to all of its customers.

Eversource, however, covers the majority of the state and was tracking significant storm damage in eastern Connecticut. By Sunday afternoon, over 90% of the town of Canterbury had lost its electricity, making it the hardest-hit location in the state. Restoration crews – which have been arriving from all over the eastern half of the U.S. – were working in the area and by 11 p.m. that outage figure had dropped to 63% of the town’s customers, with a total of 14,775 customers (less than 2% of their customers) without service around the state.

And while the state got lucky with respect to the lower-than-expected intensity of the storm, state officials were happy to report that efforts to hold the state’s electricity utilities accountable following Tropical Storm Isaias last August had borne fruit.

Lamont said the “jury’s still out” on the utilities’ performance preparing for Henri, but he also said, “At this point I’d like to say that our utilities are better prepared. Let’s see where we are in 24 hours.”

He added, “Marissa and our team put some pressure on our utilities to get it right this time. I like to think we got it a lot better right.”

Asked whether the way the utilities are structured is conducive to placing the customer’s needs first over the shareholder’s, Lamont said he doesn’t like the idea that the utilities live on a “pass-through cost” model.

“I don’t think that gives them the right incentives to do the right thing,” Lamont said, adding that he believed PURA will be putting in place some of the most aggressive performance-based metrics there are, so the utilities’ return will be based on “how they deliver the goods.”

Gillett said that the changes appear to be working and incentivizing the utility companies to plan and prepare better.

“I think what we saw through this storm, is we saw the utilities leaning in and preparing with the best resources that they could for the best forecasting that we were seeing,” Gillett said, adding that PURA will be using the new framework of metrics to evaluate whether the utilities did their best with what they had at the time.

She called the utilities’ response to Henri a “demonstrable improvement.”

Among the disruptions caused by the storm were flash flooding problems that blocked various streets and roads around the state, including the shutdown of I-91 northbound for part of Sunday afternoon.

According to Paul Mounds, chief of staff for the Lamont administration, four Apple nursing homes had to be evacuated on Sunday, including facilities in Old Saybrook (63 residents), Mystic (45), Guilford (69), and West Haven (71).

Mounds said all of those individuals were temporarily moved to other facilities and the state was monitoring their situations.

Also Sunday, the federal government approved Connecticut’s request for a disaster declaration, and Lamont said the state had asked municipalities to start assessing damages so that they could be quantified and covered.