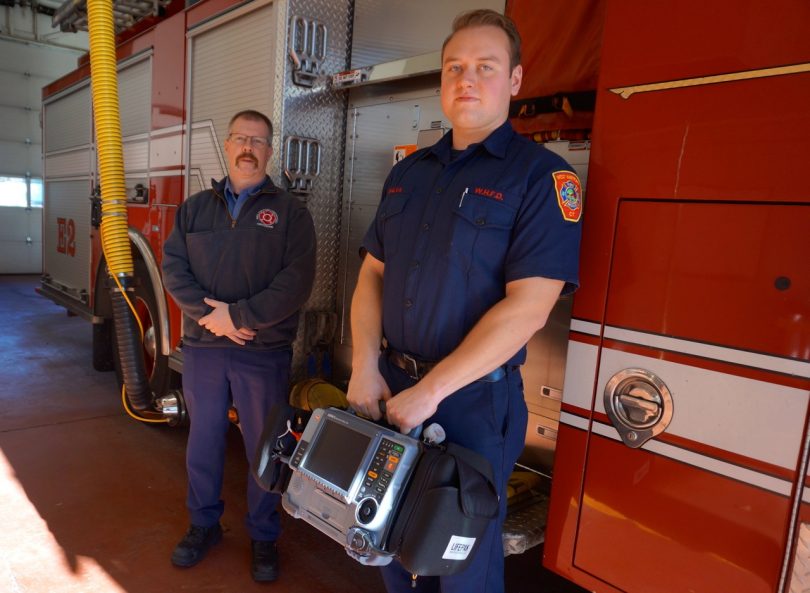 In the 10 years that Taylor Salva has been a paramedic, the number of successful outcomes he’s seen in a patient who has gone into cardiac arrest can be counted on his fingers.

Two of them happened in the past week – and in both cases a quick response by the West Hartford Fire Department was a life-saving factor.

Salva, a firefighter/paramedic assigned to station no. 2 on Brace Road, was on duty Tuesday afternoon when an emergency call came in from a doctor’s office right around the corner at 41 North Main St. A patient had gone to his primary care physician complaining of chest pains, and the doctor’s office called 911.

“He was awake and talking when we got there,” Salva said Wednesday. “He reported chest pain but shortly after that he lost consciousness and went into arrhythmia.”

The abnormal heartbeat was preventing blood and oxygen from flowing normally, and the middle-aged man was in cardiac arrest, said Salva.

Salva quickly deployed the LifePak 15. “We quickly defibrillated him to a normal heart rhythm,” he said.

The entire process – from the time that Salva began talking to the patient, until he went into cardiac arrest, was defibrillated, and woke up – was less than two minutes, said Capt. Keith Byrne, who was the supervisor on duty Tuesday.

“He woke back up, and then another one of our assets is the ability to take a 12-lead EKG,” said Byrne. The results were obtained quickly, and it was evident that the man was having a massive heart attack, he said.

The LifePak 15, which is standard equipment on all West Hartford Fire Department apparatus now that they provide paramedic services, can also transmit the results of the EKG directly to the hospital. It does the work of three machines – a heart monitor, EKG. and defibrillator.

In this case, Salva interpreted the results, sent them to St. Francis Hospital, and alerted the emergency room staff of the situation so that they were ready and informed by the time the AMR ambulance arrived at the hospital, just eight or nine minutes later.

Salva rode with the patient in the ambulance, administering medication to stabilize the man’s irritable heart as much as possible, and never leaving his side until he was checked in at the emergency room at St. Francis and whisked off to the cardiac catheterization lab. He said that the West Hartford Fire Department paramedics have 44 different medications at their disposal.

“This was a significantly ill patient, who pretty much died right in front of us,” Byrne said. “Taylor’s actions quickly brought him back to life.”

Chief Greg Priest checked with St. Francis staff on Wednesday, and said he was told the patient was “doing well.”

Salva said a major component in the success of this case was how quickly he and the rest of the station no. 2 crew arrived at the scene, even before the police got there.

Getting blood and oxygen to the injured heart muscle as fast as possible is key to a positive outcome, said Salva.

“Time means cell death, and you can’t get that back,” said Byrne. More time could have led to further damage, or death, he said.

Salva said that an emergency call was received at about 11:30 p.m. last Thursday (Nov. 29) regarding a 38-year-old man who had been playing  hockey at Veteran’s Memorial Rink.

While one player did CPR, another grabbed the rink’s AED, which instructed him to administer a shock. Shortly after that, the man woke up.

“We arrived to him lying on the ice, awake,” said Salva. “That’s pretty rare.”

Salva took over from that point, and the patient is doing well at UConn Health Center, Priest said.

An AED is easy to use, Salva said, and early CPR and defibrillation are key to a positive outcome.

Emergency responders generally have to work pretty hard to get a patient breathing again, Byrne said, but to have someone wake up and speak is pretty rare. Having it happen twice in the same week – “that’s the unbelievable part,” he said.

These two cases are examples of the American Heart Association’s “Chain of Survival” system working as it should. The components of the chain include early recognition and contacting emergency personnel, immediate CPR, rapid defibrillation, basic and advanced emergency medical services, and advanced life support and post heart-attack care.

“We are only a piece of that chain,” said Salva. “Especially in the ice rink situation, so much was already provided by the bystanders. It’s an example of the chain working the way it was supposed to.”

The long-term prognosis is good for both men. “Two people’s lives were saved within a week’s time, which is incredible,” said Byrne. “We’ve provided two guys with a second chance at life.”

The West Hartford Fire Department took over the responsibility of providing advanced life support (ALS) on Aug. 1, 2016. Many firefighters were already certified as paramedics, including Salva who has worked in West Hartford for about three-and-a-half years. As new firefighters are hired, the goal is to have one paramedic on duty at each station, 24/7.

Byrne touted the fire department’s ability to respond quickly anywhere in town as key to saving more lives. “People ask why we have so many fire houses, paramedics, guys on the trucks,” said Byrne. Being strategically located allows for an under-four-minute response time 95 percent of the time. An outside agency might take eight or nine minutes to get to the scene, and in a situation like this it’s a huge delay.

And while having paramedics as part of the West Hartford Fire Department can make a major difference, Salva and Byrne both urge the public to become CPR certified.