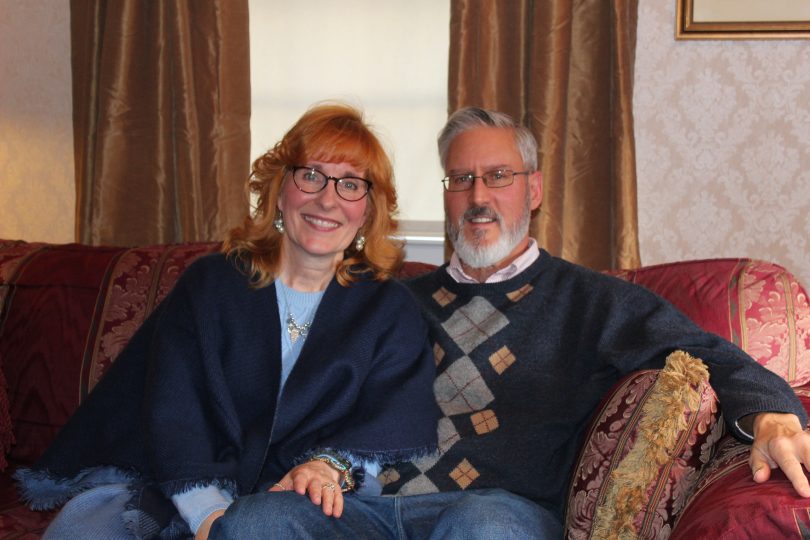 Ray and Leesa Philippon have been married for 37 years and have formed an unshakeable bond that has endured the tragedy of losing their oldest son, Lawrence, in the Iraq war in 2005. Photo credit: Ted Glanzer

West Hartford residents Ray and Leesa Philippon, who are both veterans themselves, continue to advocate for other veterans and their families as they honor their son.

[Editor’s Note: This story originally appeared in West Hartford LIFE and has been republished with permission.]

It’s the stuff of those saccharine rom-coms found on cable TV.

A young man and woman in the military have an awkward first meeting, then an adorable second meeting that leads to a lifetime of marital bliss.

And while it’s been far from a fairytale, West Hartford residents Ray and Leesa Philippon continue their journey side by side, growing and complementing each other even after 37 years, even after unfathomable heartache.

And it’s a story that began in 1979, when they both enlisted in the Army after graduating from high school – she was from Georgia, he from West Hartford. She came from a military family – her father served in World War II, Korea and Vietnam. “It was the family business,” she said. He enlisted with a friend after graduating from Hall High because he wasn’t ready for college.

“We met at Fort Bragg,” Ray Philippon said. “She was trying to be a French linguist.”

“The recruiter told me, ‘You will go to Belgium to work in the embassy. I ended up in Fort Bragg, mowing lawns and typing,” Leesa said.

In the couple’s first encounter, Ray – fresh off of assault school helicopter training – approached a car Leesa was sitting in looking for a ride back to the barracks.

“There was only one voice that came out of the back seat,” Ray said.

The car drove away.

Sometime later, Leesa and Ray were hanging out with several people in a common room when Leesa told a joke about a wide-mouth frog.

Ray said he was hooked.

“It was hilarious,” he said. “I talked to a friend, I was shy. He told me who she was, and he introduced us. … I hadn’t seen her before. I wanted to get to know her more.”

That was November 1980. They were married May 8, 1981, in a low-key affair that included a two- or three-day honeymoon in Myrtle Beach. Their first, child, Larry, was born in 1983 at Womack Army Hospital in Fort Bragg. After the couple was discharged from the military shortly thereafter, they and Larry moved to West Hartford on the property of Ray’s parents on Whiting Lane, where they had two more children: Emilee and Bryan.

Ray went back to school, where he eventually got a degree in economics and finance. Those years were a blur for Ray, who was studying, working full-time, and managing the commitments of his young family and his parents.

Leesa raised the children and the Philippons looked like a typical West Hartford family. 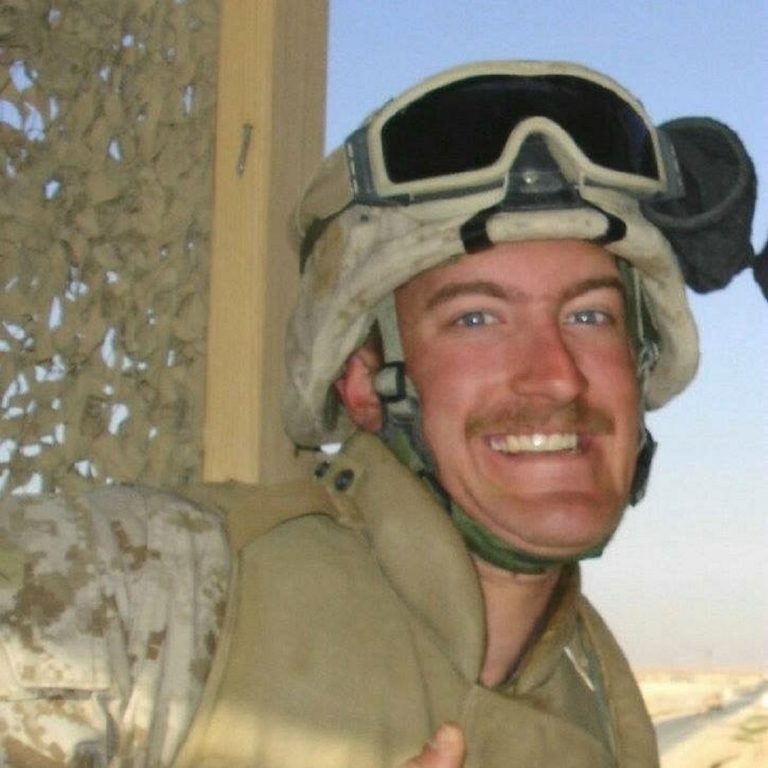 After 9/11, Larry, a Conard graduate and a standout athlete, decided to enlist in the Marines and he was deployed to Iraq, where he was killed in action on May 8, 2005 – Mother’s Day and the Philippon’s wedding anniversary.

While devastating, the tragedy didn’t break the family.

“One theme – what held us together – is our faith,” Ray said. “We both have a strong Christian faith. Through the loss of Larry and all the difficult times, the loss loss of parents, Jesus gave us the strength to make it through. That is the essence of who we are. With the loss of Larry, Jesus was the glue that kept us together.”

Ray and Leesa recalled sitting on the couch of their living room, not saying a word.

“Being so miserable, we couldn’t help each other through our grief,” Ray said. “But we had our faith, listening to Christian music on the radio helped give us the strength. And people prayed. So many people praying for us gave us the strength to make it through.”

Bryan, who was seven years younger than Larry, had a difficult time as well, struggling with his studies in high school. He eventually convinced his parents to allow him to join the Marines, too.

“At first he wanted to go into Marines for all the wrong reasons,” Ray said. “We held him off, held him off. Finally he came to us and said, ‘I’m losing my memories of Larry, at least if I become a Marine I’ll be his Marine brother.’ All right. Done. Go. What are you going to say to that? Even though we were in the Army, we can say we are a Marine family. Marines are for life. He lost his identity when Larry was killed. He was Larry’s brother. He was no longer Bryan. And when he became a Marine, then he was a Marine and all of them took him under their wing and he will be for the rest of his life. We understand now.

“Luckily he is out. His unit is going to be deployed. He would have gone he would have re-upped to go. I don’t know how we would have handled that other than lean on our faith. But we are glad he is out and we don’t have to worry about that.”

Emilee recently got married as well, and she lives in Massachusetts.

As for Ray and Leesa, they are settling into a new chapter in their journey as empty nesters. Leesa said their relationship has changed through the years and they are different people.

“I am much more smart-mouthed to him,” she said with a laugh.

“She is not the woman I married that’s for sure,” Ray said. “She is much better – she was shy and reserved and now she is her own person. She writes and gives the best speeches. She should do a book on them. It’s a God-given talent she has. She has no qualms getting up there and speaking in front of audiences. The woman I married would never have done that. That’s how she has grown.

“She found her voice. Larry had the courage to go into that building when they knew insurgents in there. If he had that courage, then we can find the courage to stand up in front of people.

“When we met I hadn’t committed my life to Christ. My faith has helped me get through a lot of different things. Job issues, dealing with the loss of Larry, raising a family.”

To help in dealing with the loss of Larry, the couple has set up a scholarship at Conard and Hall. For years they have also given to Operation Smile, paying for corrective surgery for about 200 children with cleft palates. Leesa said she hopes the ability to express grief – something that wasn’t always the case in the past – will help couples stay together after they experience tragedies.

“I wonder with the ability to communicate we see it all the time people losing children finding strength with each other able to talk to each other and honor their children,” she said.

Leesa said there are things that haven’t changed.

“He has always been a gentleman,” she said. “I love that about him. He always opens the doors for me. If I’m going out the back door to get into car, he opens the door for me. He treats me like a queen. It isn’t easy. He does do much for me. Even around the house. It’s a team. We’re a team.”

Ray, for his part, said he has regrets, of course, but he also wouldn’t necessarily change the way things have worked out.

“I was nominated to go to West Point,” he said. “That didn’t work out and if it had this wouldn’t have happened. It’s the way it’s supposed to. That’s God’s plan. [Leesa] likes to say it’s a tapestry and we’re all woven together. … [Larry’s] destiny was for him to be taken at that time. We go to Arlington where he is buried and we’re very humble. We know when we are gone someone will place a flag there on Memorial Day and Veterans Day and give him a salute. As a parent, you have kids and you lose a child and that’s the toughest thing in life. You don’t want your kids to be forgotten. We had all those hopes and dreams for him. He was a star athlete and envisioned this life – he wanted to be a state trooper and it just stopped. As a parent you don’t want them to be forgotten.”

Ray and Leesa are both active members of CT Friends of Veterans and the American Legion. Leesa is a member of the VFW Auxiliary and Gold Star Mothers of America. She is also a program coordinator at Resilience Grows Here, a veteran initiative of the Farmington Valley Health District.

“We believe that the best way to honor our son and others who have made the ultimate sacrifice is to love, honor, and care for those who are their brothers and sisters in arms,” Leesa said. “Advocating for our veterans and their families enables us to join in God’s work of turning what was meant for evil for the good.”