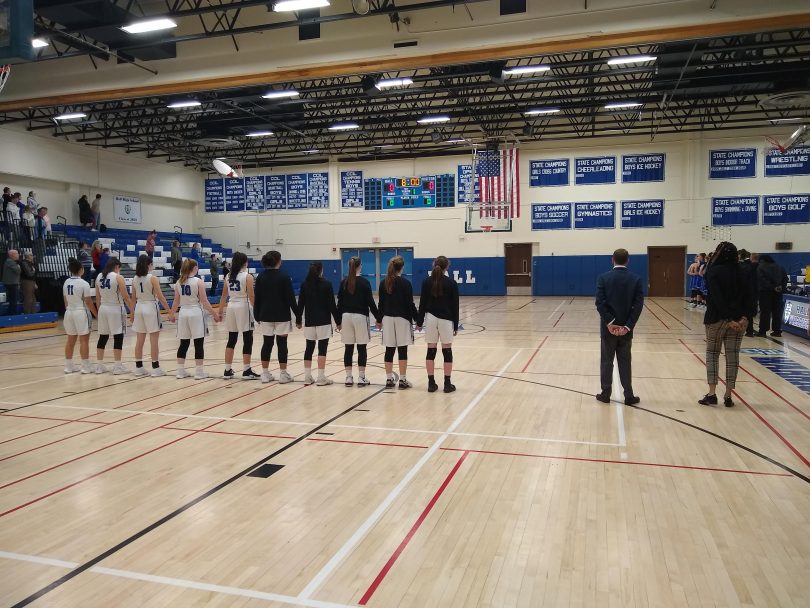 Despite a game plan aimed at limiting offensive rebounds for Bristol Eastern, the Lancers dominated the glass to defeat the Hall girls basketball team 52-45 Thursday night in West Hartford.

“We told them they are great [at] offensive rebounds,” Hall head coach Brittany Huggins said. “They had 10 in the first half, 10 in the second half, 20 total. … We talked about Bristol Eastern for three days.”

Ciara Collins scored a game-high 19 points for Bristol Eastern (7-4), while Olivia Bonee led Hall (5-5) with 18 points. Bonee scored 13 of her points in the second half, attempting to spark a comeback for the Warriors who trailed for most of the game.

Hall jumped out to a 7-4 lead early in the first quarter, but Bristol Eastern led 14-13 into the second.

The Lancers stretched their lead to 30-21 heading into the break with a 6-2 run over the last three minutes of the half.

The Warriors shrunk the margin to three, down 34-31 with 1:08 left in the third quarter, but the Lancers made two consecutive baskets to go ahead 38-31 entering the fourth.

Collins made a 3-pointer with 6:16 remaining to give Bristol Eastern a 44-33 lead, its largest of the night.

Olivia Deslauriers made a layup to bring Hall within five, trailing 49-44 at the 1:14 mark. While the Lancers went just 3-for-7 from the free throw line in the final minute, it was enough to keep the Warriors at bay down the stretch.

Huggins said the team looks to address rebounding as it heads into the second half of the season.

“The thing is, rebounding is heart, fight, grit. It’s inside. It takes very minimal basketball effort,” said Huggins. “We’ll practice it more, we’ll emphasize it more, and hopefully see the difference in the games.”