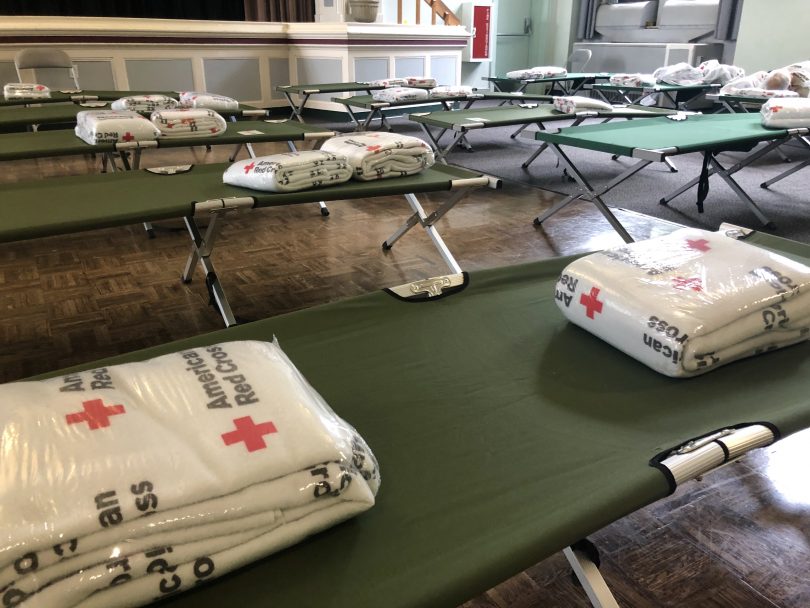 15 cots were initially set up at an emergency shelter at the Elmwood Community Center for victims of a fire at 100 Kane St. Photo credit: Ronni Newton

Elmwood Community Center will serve as a shelter for residents of 100 Kane St. displaced by Tuesday morning’s fire, and residents can return to the undamaged portion of the building beginning at 8 p.m. Tuesday. 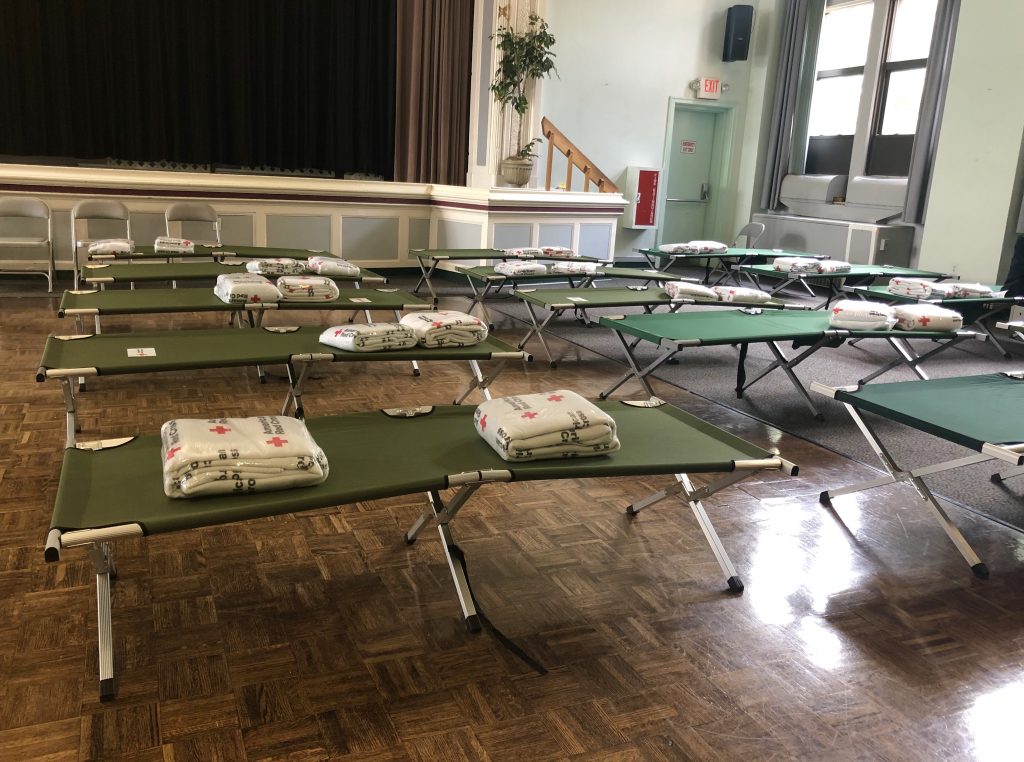 15 cots were initially set up at an emergency shelter at the Elmwood Community Center for victims of a fire at 100 Kane St. Photo credit: Ronni Newton

The American Red Cross, in partnership with the Town of West Hartford, opened a shelter at 2 p.m. Tuesday at the Elmwood Community Center, 1106 New Britain Ave., offering those displaced by an early morning fire on Kane Street a place to not only sleep, but also get food, relax, and connect with representatives of the Social Services Department and register for disaster relief.

The shelter, which has been set up with 15 cots but can be expanded or contracted as needed, will remain open until 10 a.m. Wednesday, Fire Chief Greg Priest said.

All 40 units in the apartment-style condominium building at 100 Kane St. were temporarily uninhabitable – some due to fire, water, or smoke damage, and the remainder due to a power outage that knocked out emergency lighting and other life-safety systems in the building.

The electrical problem was due to a damaged breaker, not directly related to the fire.

It initially appeared that the repair could take considerable time, but Priest reached out to Eversource with an urgent request to assist, and the part was located. Power was restored to the undamaged part of the building at 4 p.m., allowing residents to return to about half of the units beginning at 8 p.m. Tuesday.

Priest said creation of an emergency shelter in West Hartford is not often required, and the last time was when a fire damaged a building in the same complex in March 2016.

About 12 of the building’s 40 units will remain uninhabitable for a longer period of time due to extensive damage, Priest said. The condition of some of the building’s units has not yet been assessed for potential water or smoke damage because no one was home when the fire occurred.

Town Manager Matt Hart said that the Elmwood Community Center shelter is run by, and funded by, the American Red Cross. The town will station a police officer at the facility overnight, and has used town vehicles to transport residents from Kane Street to the shelter.

A team of American Red Cross volunteers, led by Jon Basso, senior director of Disaster Cycle Services, was at the shelter Tuesday afternoon, handing out Disaster Relief kits to affected residents and assessing their needs. He is the only paid staff member, and has a cadre of about 200 registered and trained volunteers through the Farmington location who are ready to help when needed. 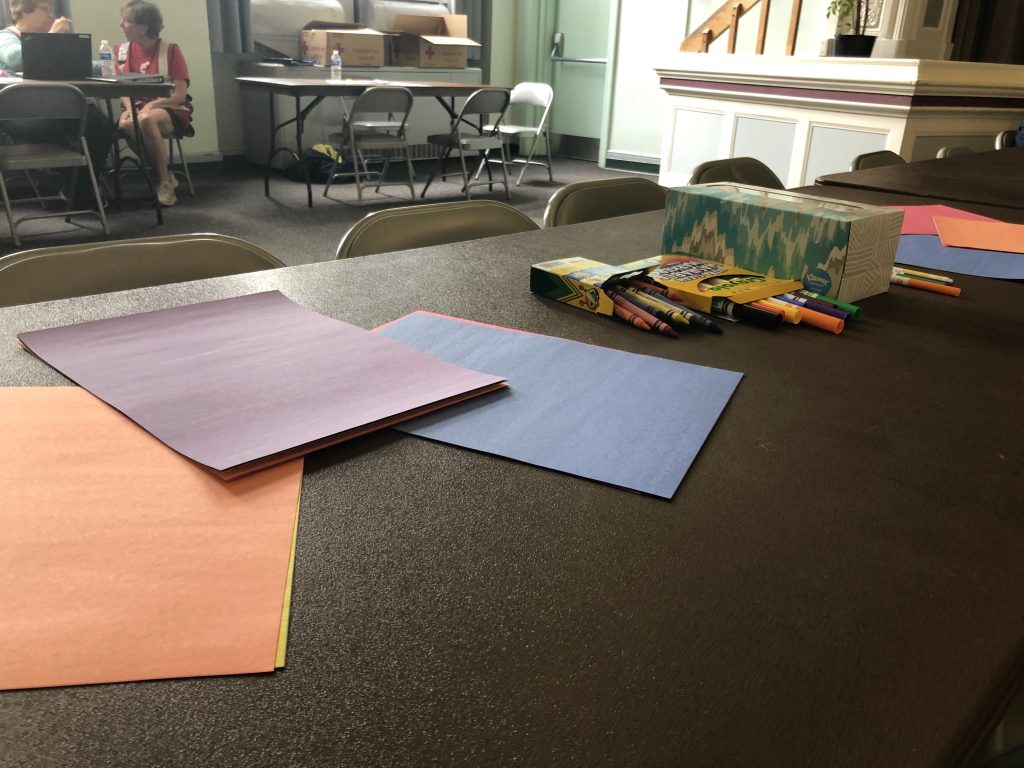 The Elmwood Community Center shelter was set up so that children staying there could color or play games. Photo credit: Ronni Newton

Services from the Red Cross are available to those who will remain overnight at the shelter, who require other accommodations, or who have a place to stay with family or friends but need some other type of immediate assistance or guidance.

“Big fires are not that typical, but they do happen,” Basso said. “Opening a shelter for a large fire luckily is relatively rare.”

The biggest issue they typically deal with is how many people are displaced, and for how long. There can be plenty of frustration, and the Red Cross tries to provide resources for comfort as well as shelter, Basso said.

Basso said in this case it was good to be able to use the complex’s leasing office as an initial gathering spot for residents before the shelter opened. On Tuesday afternoon he estimated that the Red Cross, and/or West Hartford Social Services, had interacted with about two-thirds of the people displaced by the fire. Most planned to stay with family or friends.

Wednesday is the first day of school in West Hartford, and Smith STEM School Principal Teresa Giolito has been engaged since hearing about the fire, and walked over to the site early Tuesday, Priest said. Smith is the neighborhood school for 100 Kane St. A bus would be available to pick up anyone who had to stay overnight in the shelter and bring them to Smith in the morning.

Calderón said she had been in touch with the superintendent’s office as well as Gioloto as early as possible. There are a total of 18 kids in West Hartford Public Schools who live in the building.

Some of the units are owner-occupied while others are rented either on the open market or through Section 8 vouchers. Calderón said she and other staff were contacting landlords as well as the condo association to make sure all residents have a place to stay and have their needs met. Some of the landlords own other rental units where they will be able to relocate residents.

“Working with the Red Cross has been a very good opportunity,” said Calderón. They have a nurse on staff who has been very helpful in assisting with evaluation of those with disabilities who require special accommodations for shelter, or others for whom a shelter environment would not be appropriate.

The Red Cross is prepared to find other accommodations, or to separate and supervise people in the shelter 24/7, she said.

Social Services will be available to help residents even after the shelter closes, Calderón added.

Mayor Shari Cantor visited the Elmwood Community Center shelter Tuesday afternoon and spoke with families who were planning to stay there as well as first responders. She brought over some toys and art supplies for the children, as well as chargers, eye masks, ear plugs, mints, and some other supplies to make a stay at a shelter more comfortable.

Cantor also praised the work of the Social Services professionals who have been at work since being notified about the fire very early in the morning.

“I’m very proud of our staff, and they way they work together – the collaboration and efficiency even in the early hours of the morning,” Cantor said.

Hart said that he is thankful for the town’s public safety units, who have been calm and professional throughout this situation. The residents have also been outstanding and for the most part in good spirits.

“I give lots of credit to the building officials, fire marshal, Social Services, school district, and the Red Cross,” Hart added.

“We’re here for our residents and our neighbors, and will be here for as long as we’re needed,” Hart said.

Anyone who is a victim can come to the Elmwood Community Center (1106 New Britain Ave.) to register with the Red Cross, or once the shelter closes can call 877-287-3327 to receive a Disaster Relief packet.

Those looking to assist the victims can donate through the Red Cross website.

Calderón said that Social Services is assessing the needs of impacted residents, including sizes and types of children’s clothing, and will provide those details as soon as possible. She said it’s likely that Smith will serve as a drop-off point for donations to their students and families.