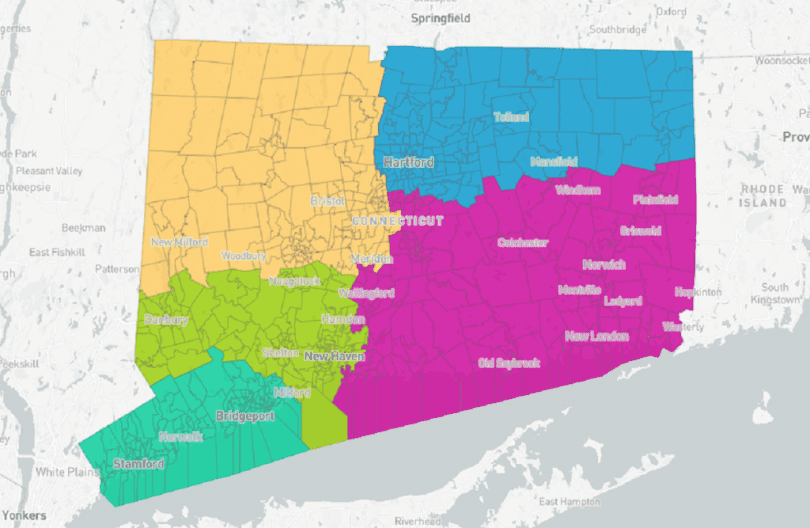 The Connecticut Reapportionment Committee will conduct a hearing in Hartford on Sept. 8.

A long-delayed panel of lawmakers tasked with adjusting the boundaries of Connecticut’s voting districts announced a schedule of virtual and in-person hearings to solicit public input on this year’s redistricting process during a Friday meeting.

The Connecticut Reapportionment Committee will conduct a hearing in Hartford at the Legislative Office Building 7 p.m., Sept. 8. A second hearing will be held at the town hall in Norwich 1 p.m., Sept. 9. The third event will take place at the city hall in Shelton at 1 p.m. on Sept. 13. Meanwhile, the committee scheduled a virtual hearing for 7 p.m., Sept. 14.

This year’s format is a departure from the committee’s tradition of conducting public hearings in each of the state’s five congressional districts before it gets to work adjusting the boundaries of those districts as well as state legislative districts. The change is driven by both timing and public health precautions. Rep. Gregg Haddad, a Mansfield Democrat who is co-chair of the bipartisan panel, said this year’s committee faces unusual challenges.

“The pandemic is affecting these hearings in a couple different ways,” Haddad said. “One is, we wanted to make sure there was an opportunity for people to address the committee through virtual means by establishing a Zoom hearing. Additionally, we wanted to make sure we were scheduling in-person public hearings around the state so that folks could address the committee in-person in a safe manner.”

The eight-person panel opted to shorten its schedule of in-person meetings while adding the virtual component. The three in-person hearings are situated in a rough triangle across the state and are meant to provide an event within reasonable driving distance from each corner.

The state constitution requires lawmakers to convene once a decade following the results of the U.S. Census survey to ensure voters in each district get equal representation.

“It’s really the process by which we make sure that the one-vote, you know, the strength of that vote is maintained and insured and to make sure that fairness and equality reigns throughout the process,” Sen. Kevin Kelly, a Stratford Republican who co-chairs the committee, said.

While the constitution includes a Sept. 15 deadline to draft a plan for new maps, this year’s committee is certain to need more time.

The process has been stalled for months by delays at the Census Bureau, which struggled last year to conduct its nationwide population count in the midst of the global pandemic. The agency, which typically releases redistricting data in March, published the information in August.

“Our timeline is very unusual and folks in Connecticut I think should know that that hopefully will not limit your ability to influence the process and put your ideas on the public record about what districts should look like,” Haddad said.

While the process will be constrained in some ways, there are more tools available this year to help members of the public formulate recommendations for the next decade’s political maps.

Haddad suggested residents try their hands at mapping the districts using online resources like Districtr or Dave’s Redistricting. Both sites allow users to create maps while balancing the populations of their own proposed districts.

Members of the committee also noted that masks will likely be required at the in-person hearings. An indoor mask requirement is already in place in Hartford as well as city buildings in Norwich.