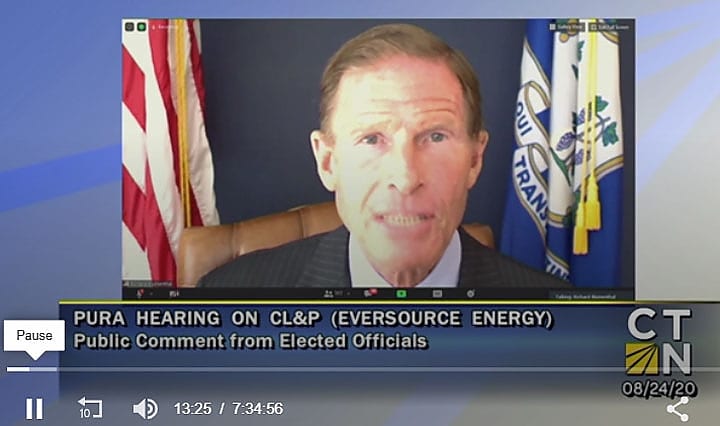 State Sen. Derek Slap of West Hartford was also among those who testified at the PURA hearing Monday.

Regulators heard hours of testimony Monday about Eversource’s rate increase that went into effect on July 1 and then was suspended pending an investigation.

The increase came at a time when stay-at-home orders forced people to work from home in the middle of a summer heat wave, which triggered an increase in usage when many consumers had less of an ability to pay. More than 1,000 consumers submitted testimony.

The Public Utility Regulatory Authority suspended the rate hike and opened up an investigation at the end of July. The intent of the reexamination of rates is to ensure that Eversource is not over-collecting revenues in the short term at the expense of ratepayers during this period of financial hardship. It’s also looking at the higher charge it approved primarily due to purchase power agreements with Millstone Nuclear Plant in Waterford. The state legislature required the utilities to purchase power from the facility to help it compete against falling natural gas prices.

U.S. Sen. Richard Blumenthal told the authority that it is “fully within your power to roll back the increases.”

He said regulators should also consider breaking up Eversource and considering a Connecticut-based utility with public ownership. Blumenthal and a number of other elected officials commented that they also felt regulators need to get rid of the system of guaranteed profits.

“I think that the time for tinkering is over,” Blumenthal said. “I think that we need to think big about becoming smaller, more responsive and smarter in the way we do public utilities and deliver power to the consumers of Connecticut.”

He said a firm link should be established between performance and profit.

Gov. Ned Lamont said if Tropical Storm Isaias and the more than 800,000 customers who lost power taught him anything, it’s the importance of the utility. He said it’s a “life-and-death service.”

“The disconnect between pay and performance is shocking to me,” Lamont said. “I think the days of getting a 9.5% rate of return for just showing up is over.”

Tropical Storm Isaias and Eversource’s response to that storm is the subject of a separate docket before PURA. Before the storm, the utility underestimated the number of outages to be around 125,000 to 380,000. It ended up being more than 800,000 and many customers were without power for several days.

But Monday’s hearing concerned the rate increase that shocked ratepayers in July.

Rep. Holly Cheeseman, R-Niantic, said she wants to know why Eversource is attributing the rate increases to the Millstone deal and then later attributed them to usage increases.

“I’d also be interested in PURA’s criteria for the rate increases,” Cheeseman said.

She said the electric company’s bill is confusing because there are 11 separate delivery charges – all of which are calculated differently.

“I think we do need to address reliability in terms of performance-related costs,” Cheeseman said.

“How these charges are calculated, how they are justified needs to be more transparent,” Cheseman said.

Penni Conner, chief customer officer for Eversource Energy, said they understand their communications about these increases through the media were “insufficient” and only “conveyed two of the three reasons for the overall bill increase.”

Conner said electric usage due to COVID-19 increased 36% between May and June and that the average energy usage in June was 26% higher than June 2019.

Doug Horton, vice president of distribution rates for Eversource Energy, said no one could have predicted the pandemic.

“We do the best to include all the information we have,” Horton said.

Horton also pointed out that “our profits do not increase when residential electricity usages increase.”

Eversource officials also pointed the finger back at regulators, offering testimony that the rates must be approved by PURA.