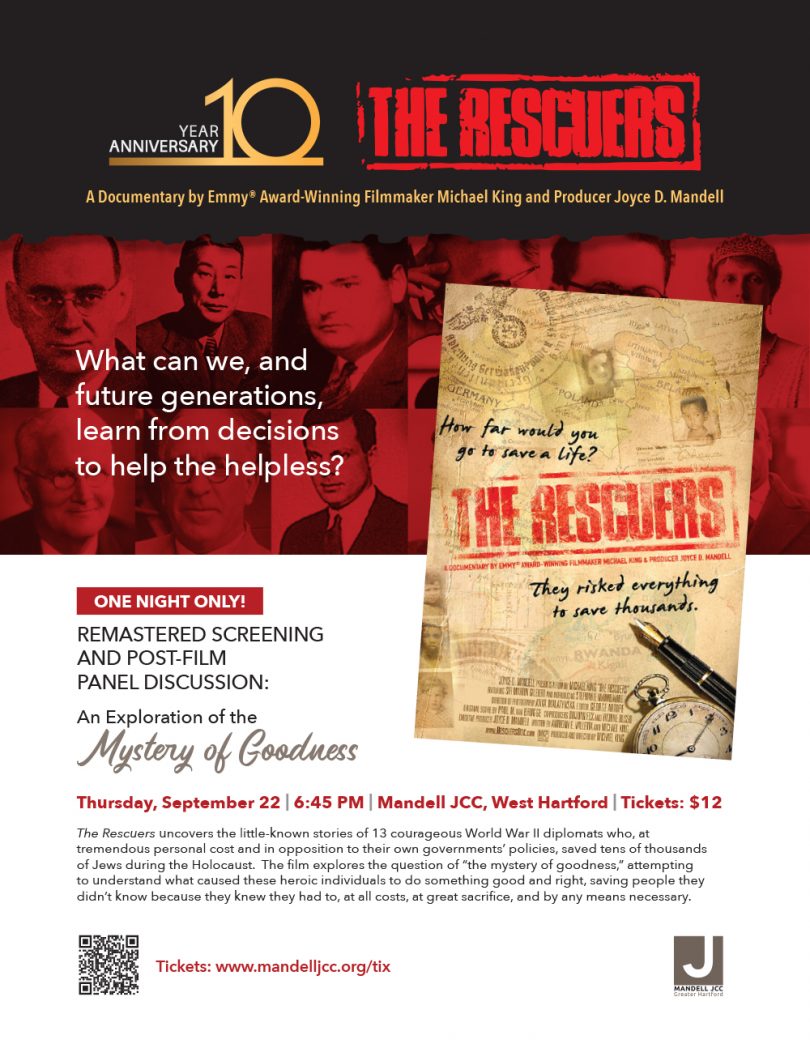 For one night only, the remastered version of ‘The Rescuers’ will be screened at the Mandell JCC in West Hartford, to be followed by a discussion.

The Mandell JCC in West Hartford will commemorate the 10-year anniversary of the film “The Rescuers,” with a screening of the remastered version on one night only, Thursday, Sept. 22, 2022 at 6:45 p.m. in the JCC theater.

The event will feature a post-film discussion with a renowned panel of experts who will explore a theme from the film – “The Mystery of Goodness”: What leads one person and not another, to do the right thing regardless of the consequences they may face? The event is open to the public and tickets are available for $12, and should be purchased in advance.

“The Rescuers” uncovers the largely unknown stories of 13 heroic and courageous diplomats who, at tremendous personal cost, saved tens of thousands of Jews during World War II. The film follows a young Rwandan anti-genocide activist who lost 100 members of her family in the Rwandan Genocide of the 1990s, and Sir Martin Gilbert, the renowned 20th century and Holocaust historian, as they travel across 15 countries and three continents interviewing survivors and descendants of the diplomats.

Often going against their own government policies, many of the World War II diplomats, who were not Jewish, willingly sacrificed their careers, families and livelihood, working desperately to save people they didn’t know. Their actions raise the question of “The Mystery of Goodness”: What causes one human being to bypass praise or reward for his action, and just do something good and right because his instinct, soul and spirit knew he had to, at all costs and by any means necessary?

The panel for the post-film discussion will feature Debórah Dwork, Ph.D., Director, Center for the Study of the Holocaust, Genocide, and Crimes Against Humanity The Graduate Center – City University of New York; Dr. Stephanie Fagin-Jones, clinical psychologist, Adjunct Associate Professor of Psychology at Columbia University Teachers College, and a Holocaust heroism science scholar; Joel N. Lohr, Ph.D., President of Hartford International University for Religion and Peace; and Dr. Sylvia Smoller, Scientist, writer and Holocaust Survivor.  The panel will be moderated by Avinoam J. Patt, Ph.D. , The Doris and Simon Konover Chair of Judaic Studies and Director of the Center for Judaic Studies and Contemporary Jewish Life at the University of Connecticut.

There will also be an opportunity for local educators to arrange for school groups’ showings on Thursday, Sept. 22 at 10 a.m. These student sessions will feature the film, followed by a discussion and Q&A presented by Voices of Hope.

Thus far 300 high school students and teachers have registered, and will be making the trip to the JCC for the student screening. Michael King, the filmmaker, will be in attendance and following the screening will come on stage to talk with students about the film, his latest project, and will also be available to answer questions.

About the Mandell JCC

The Mandell Jewish Community Center welcomes and serves families and individuals of all ages and stages. Our fitness, wellness and recreation, arts and culture, camp, early childhood education programs, classes, clubs and services are open to all. The Mandell JCC is supported by funds raised by the Jewish Federation of Greater Hartford, a recipient of funding from the Jewish Community Foundation of Greater Hartford, and a member of the JCC Association of North America.