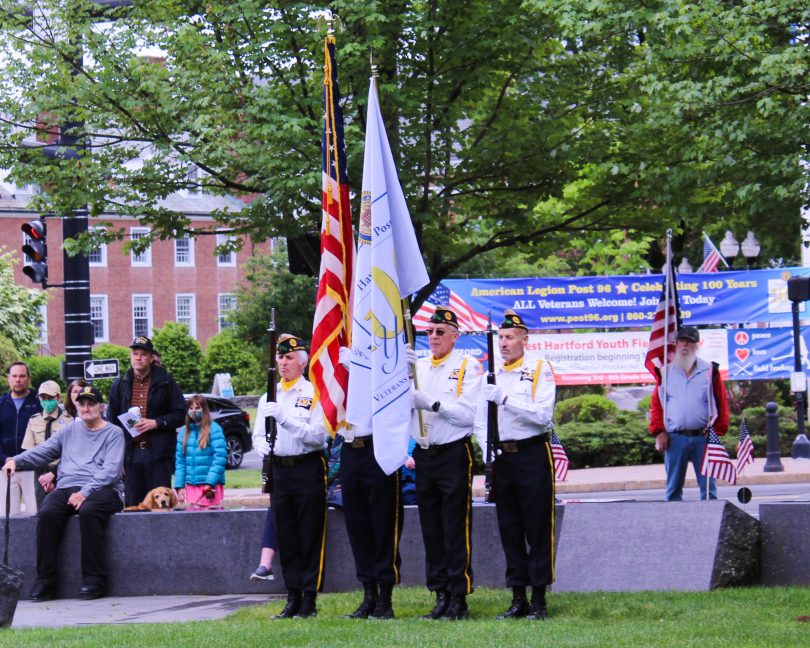 An in-person Memorial Day ceremony was held at the Veterans Memorial in West Hartford, while the town also premiered a virtual event. 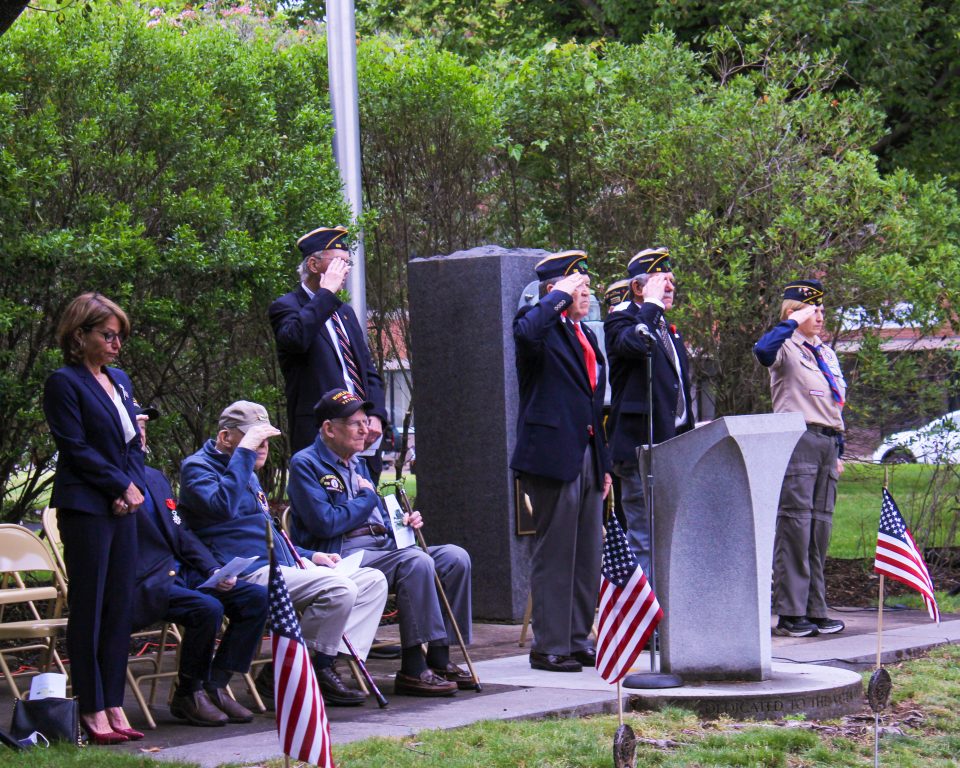 Patrick Harrell, post commander of American Legion Hayes-Velhage Post 96 and a Marine Corps veteran, addressed the community. “‘Remember me’ is the theme of all memorials and graves,” he said. 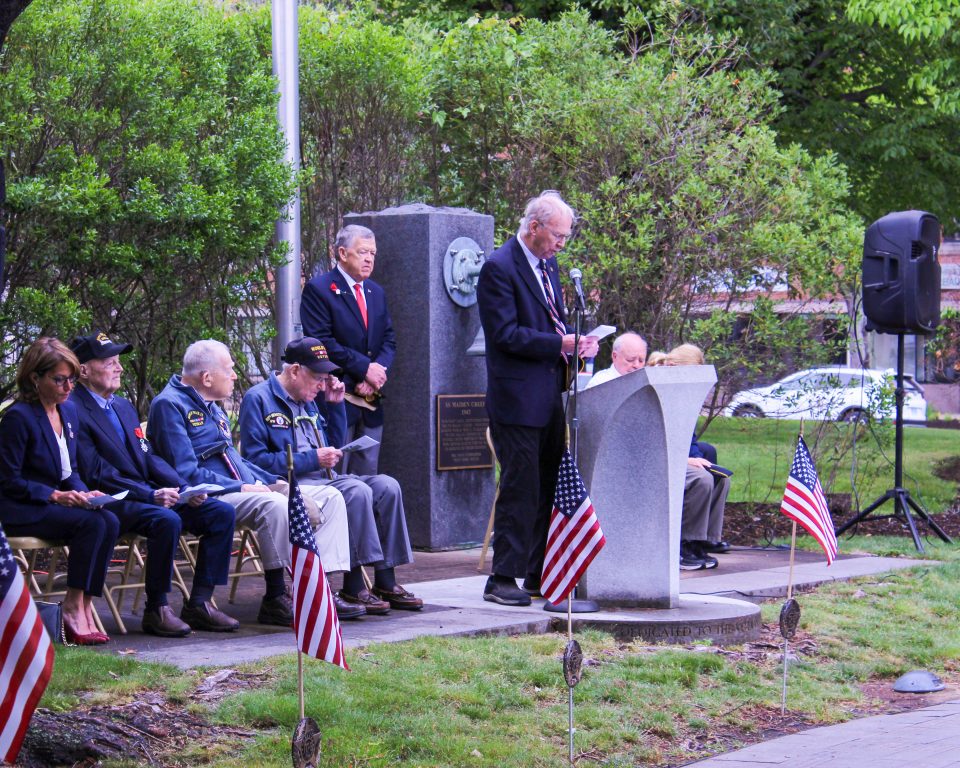 Those in attendance were also reminded of the history of Memorial Day as well as the meaning of West Hartford’s Veterans Memorial where the ceremony was held.

The memorial is made up of a circle of stones representing peace, and each break in the circle is representative of a war which disrupted the peace. The brick walk surrounding the circle are engraved with the names of West Hartford residents who sacrificed themselves for the United States. In the center of the memorial, there are soil samples from all of the battle fields and water from the seven oceans. Also near the memorial, there is a rose garden dedicated to Rosie the Riveter and the part she and the women of the United States played in World War II. 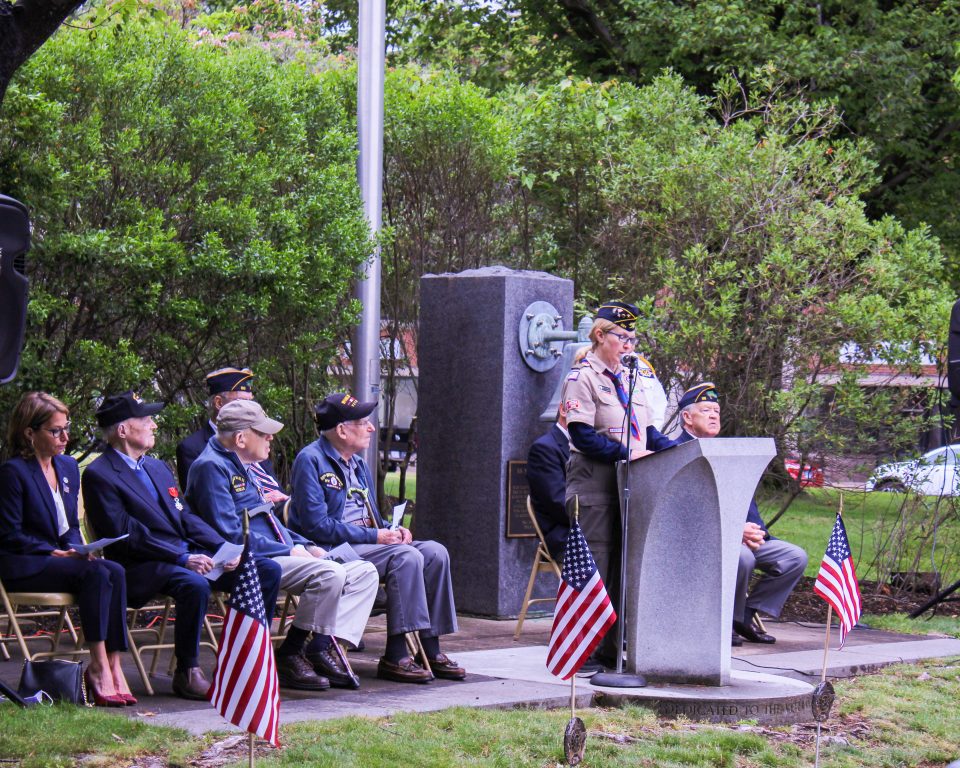 Next, names of West Hartford residents who died in service were read aloud for each war, beginning with the Revolutionary War. Twenty-six residents sacrificed themselves in the Revolutionary War, 13 during the Civil War, 12 in the Spanish-American War, 140 were lost to World War II, 12 men and women died in service during the Korean war, 17 men in the Vietnam War, one man in the Persian Gulf War, and three died serving in the War on Terror in Afghanistan and Iraq.

Mayor Cantor also gave a brief speech thanking the community for “celebrating and observing this very important Memorial Day,” and wanted to “thank and recognize” three World War II veterans who were in attendance. She also emphasized that “when people are serving, their families need support too.” 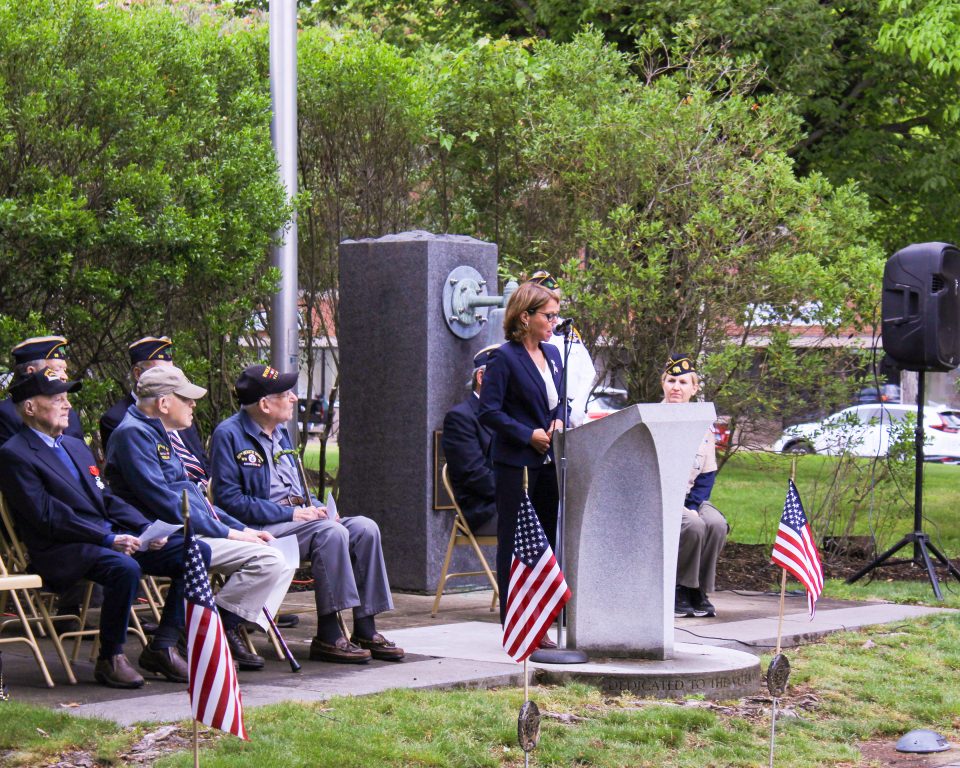 Her speech was followed by Alex and Andrew Belsham placing a wreath of flowers at the memorial site’s circle of honor. 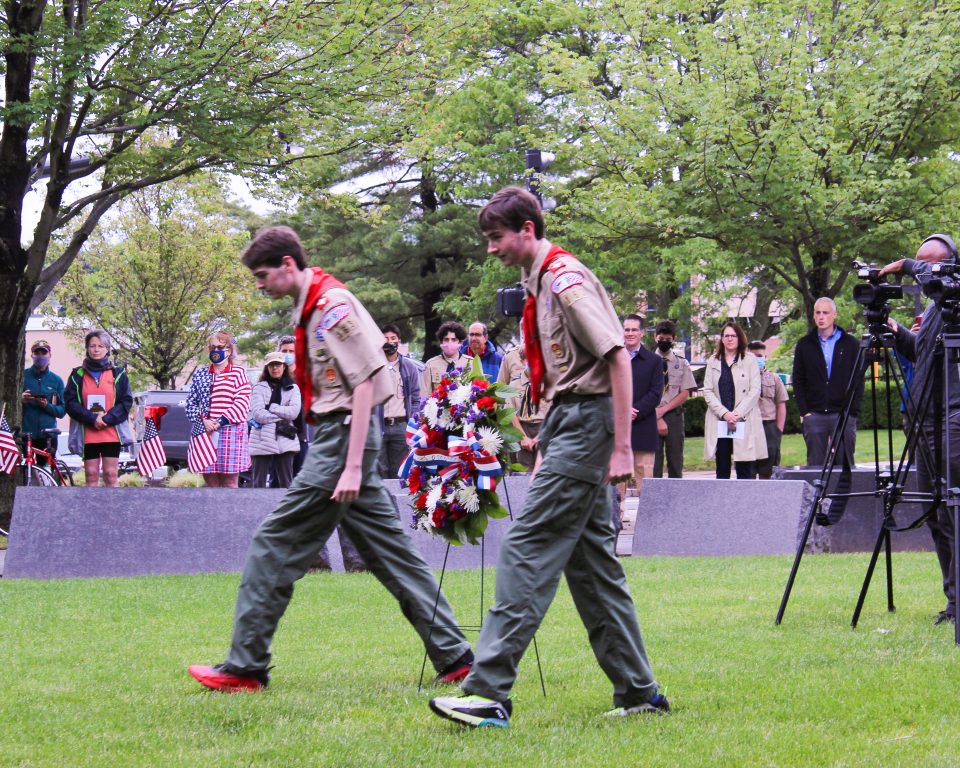 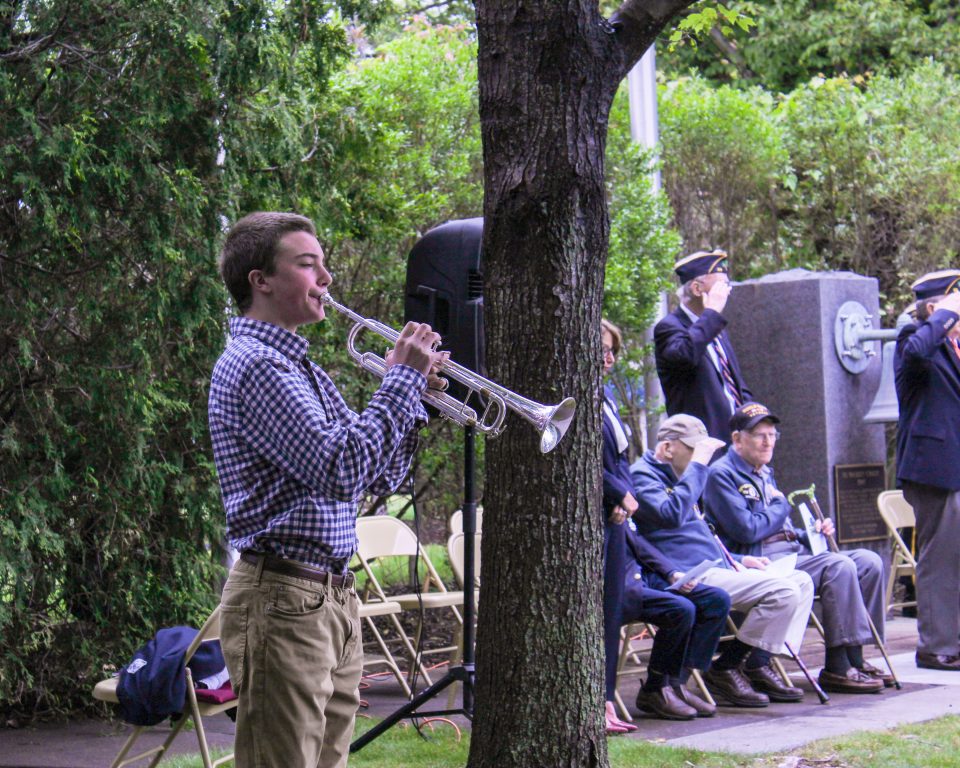 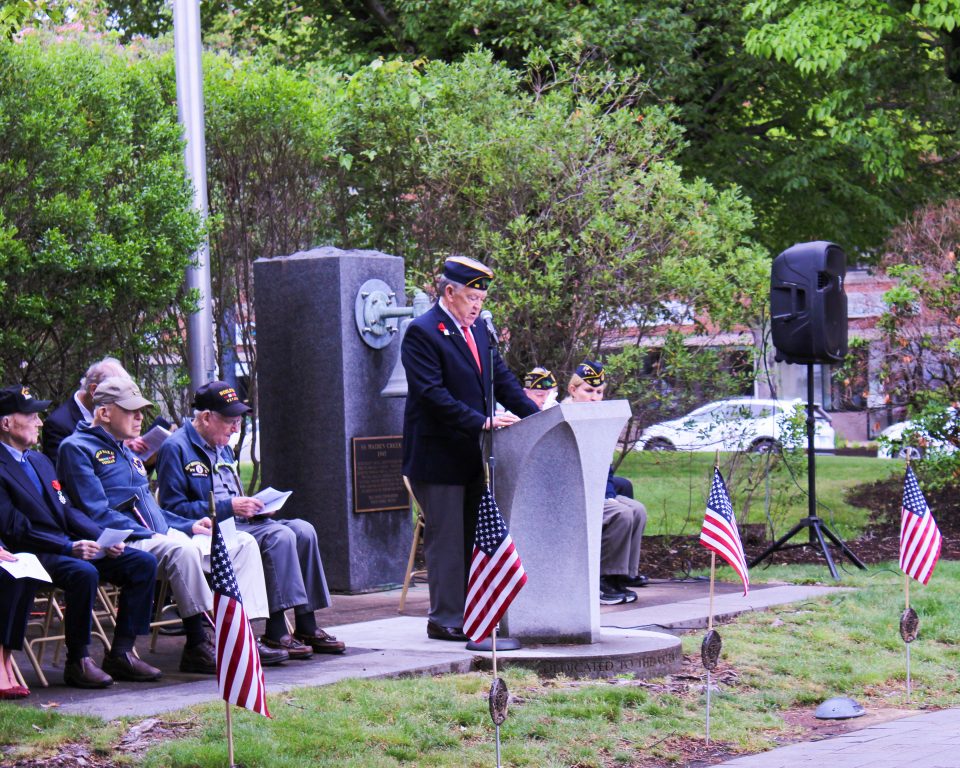 The decision to cancel West Hartford’s annual Memorial Day parade was made several months ago out of an abundance of caution, but in addition to the in-person ceremony at the Veterans Memorial, the town worked with West Hartford Community Interactive to create a virtual ceremony which premiered at 10:30 a.m. Monday.

Mayor Shari Cantor, who provided an introduction to the virtual ceremony, said that Memorial Day is about honoring the more than 1 million men and women who, since the Revolutionary War, lost their lives in the service to the country. 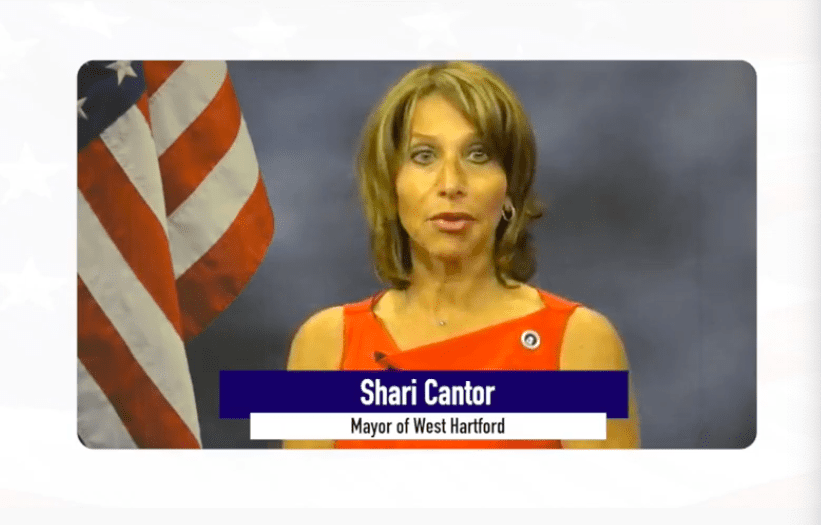 Among them are “236 brave souls from West Hartford,” she said. “By remembering them today, we honor their service.”

Cantor also noted the impact the military has had on the battle against COVID-19, and said we owe them a debt of gratitude. Locally, the Connecticut National Guard has played a major role in PPE distribution, testing, and vaccination efforts.

“These past 14 months have been tough on all of us but we are beginning to see the light at the end of the tunnel,” said Cantor, and that’s because we all took care of each other. 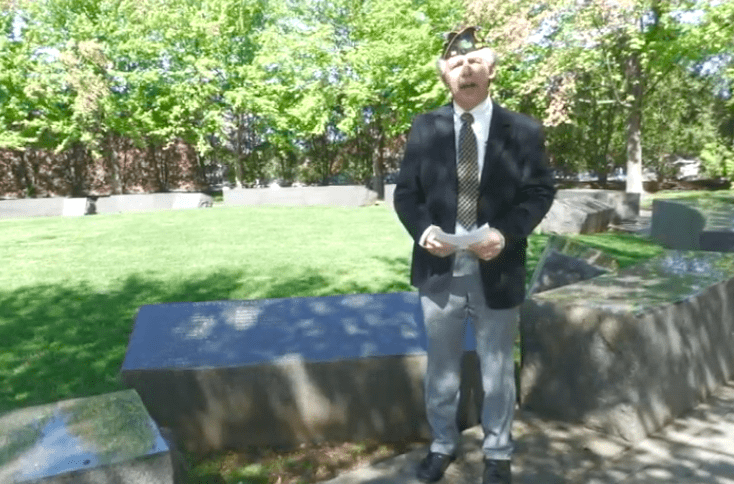 Standing at the World War I break in the stones of the Veterans Memorial, American Legion Hayes-Velhage Post 96 Commander Patrick Harrell gave the keynote address for the town’s virtual ceremony. Screenshot

His theme for the virtual address, as it was for the in-person address, was “Remember Me,” because that’s what grave markers are intended to do.

The American Memorial Day tradition began in the Civil War, he said. It was originally known as Decoration Day, and following the passage of the Uniform Monday Holiday Act by Congress in 1968, which provided for more three-day weekends, Memorial Day began being celebrated on the fourth Monday in May in 1971.

Standing at the Veterans Memorial in West Hartford Center, Harrell said that he’s seen many memorials in his travels, but this one is “the pinnacle.”

“The monument’s base design is a circle of stone, representing peace.” The breaks in the circle represent conflicts, with a stone set at an angle noting the name of the conflict and inscribed with the names of West Hartford residents “who gave their last full measure of devotion in that war.”

He chose to speak in front of the World War I break in the circle, because the American Legion was formed in 1919, on the heels of that global war. West Hartford’s post was launched in 1922, and next year will celebrate its centennial.

American Legion Hayes-Velhage Post 96, Harrell said, was named in honor of two men. Waldo C. Hayes died at age 22 from wounds sufferent in France just one month before the armistice. Francis Buckley Velhage, a second class seaman in the U.S. Navy, died on Sept. 11, 1917 at age 21. “Both are honored for their devotion to duty,” Harrell said, and for giving their last full measure to the country. 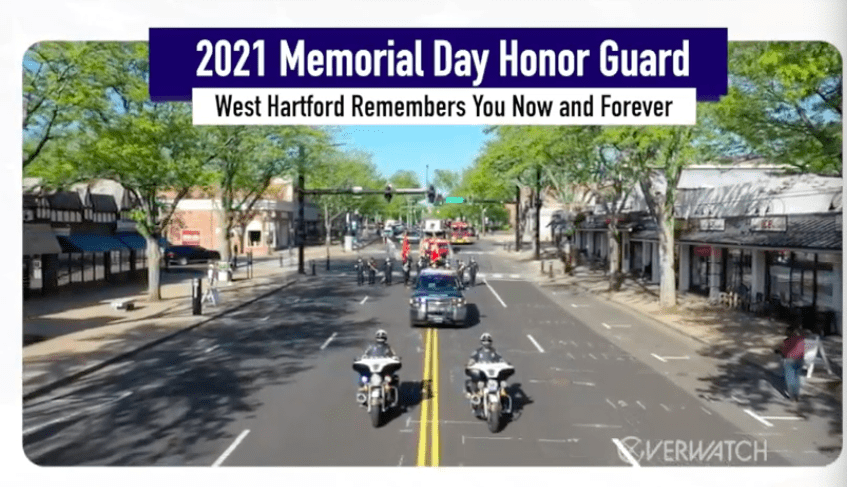 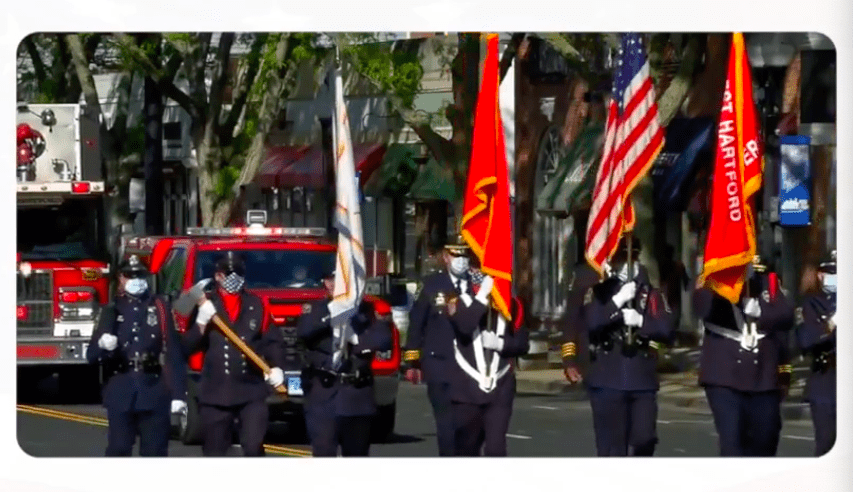 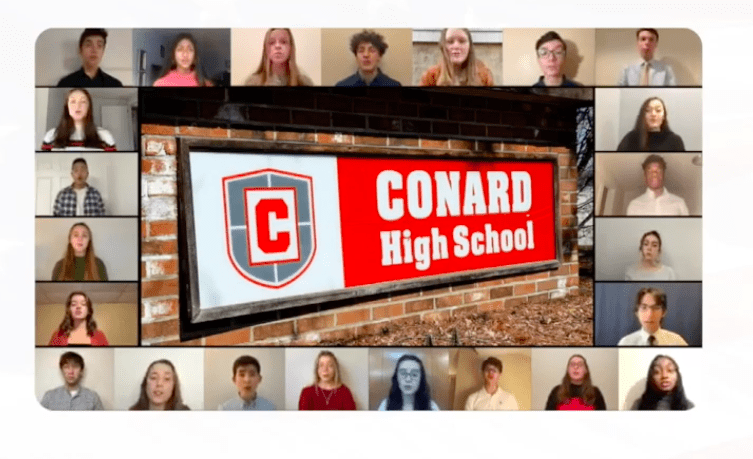 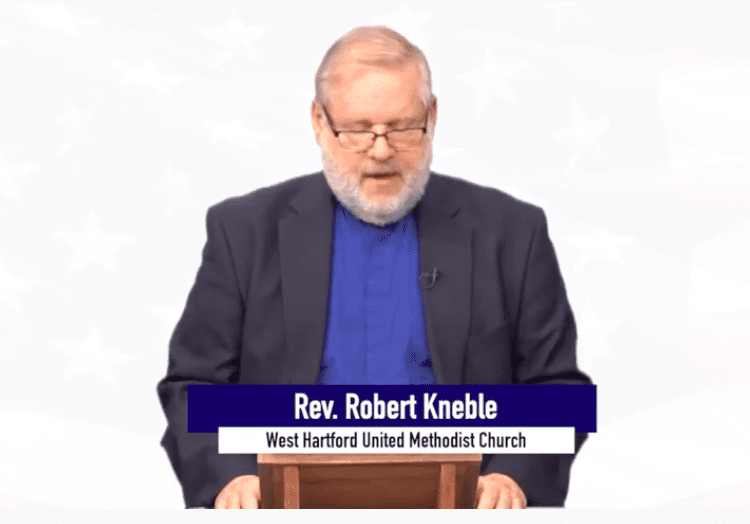 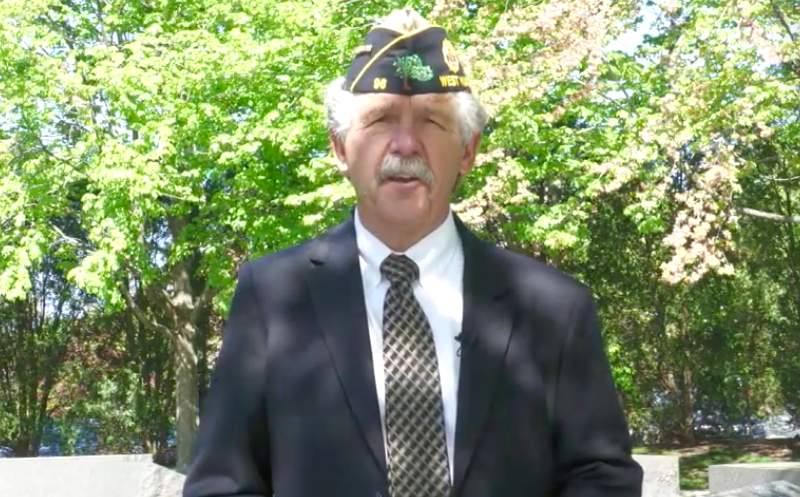 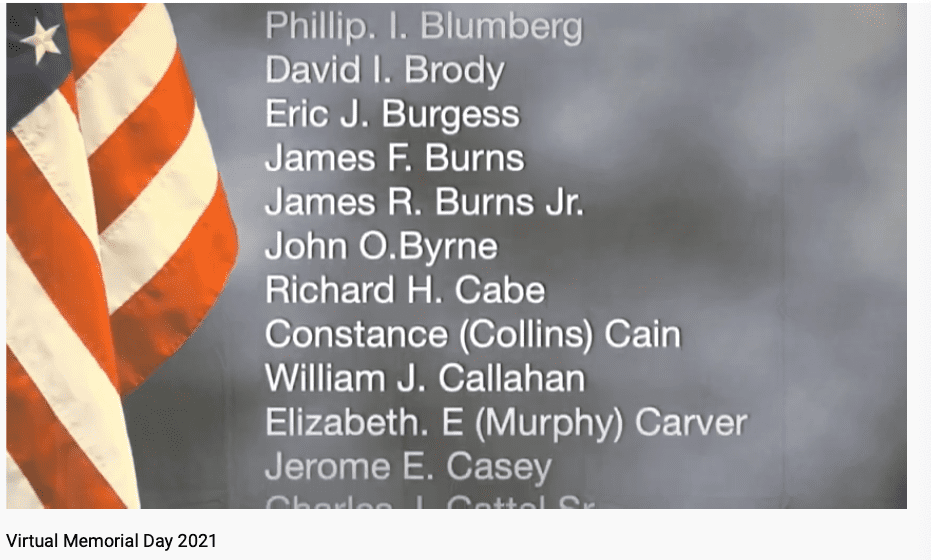 The video, which can be seen in its entirety through the link below, concluded in silence as the names of veterans who have died since last Memorial Day scrolled across the screen.

Ronni Newton contributed to this report