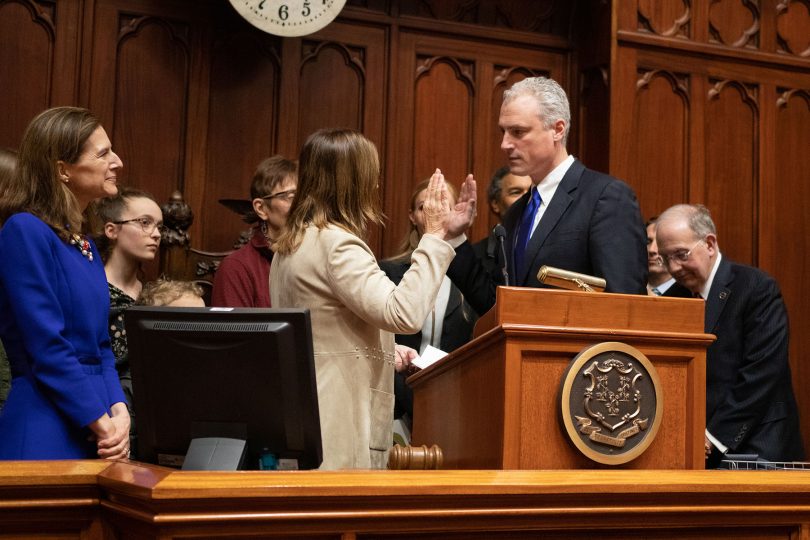 Like an NFL referee, Rep. Vincent J. Candelora, R-North Branford, is throwing a flag, saying that Democrats committed the legislative equivalent of having too many players on the field.

Candelora said Tuesday that Democrats placed one too many senators on the legislator’s Transportation Committee after assigning Sen. Derek Slap, D-West Hartford, to the panel after his recent victory in a special election. Legislative rules limit the panel to nine senators, and Slap made 10.

In Candelora’s view, that means that the committee’s approval last week of three bills authorizing the state Department of Transportation to pursue highway tolls are invalid. If they come before the House for a vote, Candelora said he will object.

“I will challenge them,” said Candelora, the deputy minority leader in the House.

Candelora made his complaint in a letter to the House Speaker Joe Aresimowicz, D-Berlin, and Senate President Pro Tem Martin M. Looney, D-New Haven. There were 10 senators on the committee last year, and no one objected.

“We don’t think there is an issue here,” Looney said.

The legislature operates under Mason’s Manual, which effectively says passage by the Senate or House trumps any procedural defect in a bill. Looney said any of the bills can properly come before either chamber.

The Transportation Committee’s deadline for acting on legislation was Monday. Candelora acknowledged that wouldn’t mean tolls were dead as an issue, even if the legislative leaders agreed with his view of the rules.

The Finance, Revenue and Bonding Committee has legislation that could be amended as enabling legislation on tolls, he said. That committee’s deadline is not until May 2.

“There certainly is a vehicle out there,” he said.

The Connecticut General Assembly has joint committees of the House and Senate. Under the rules adopted this year, most committees can have a maximum membership of nine senators and 35 representatives.

The exceptions are the Judiciary Committee and the two money committees, Appropriations and Finance.