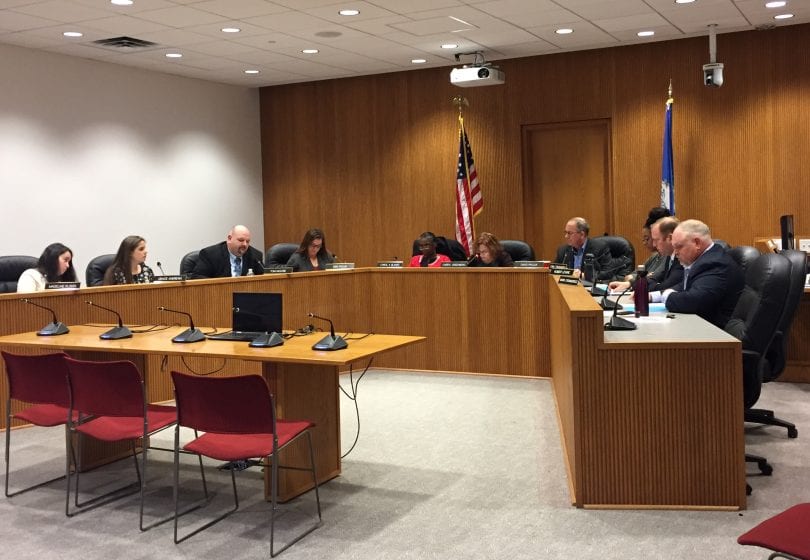 The ‘Rethinking School Start Times’ Committee was formed several months ago in West Hartford, and is tasked with studying the issue of school start times over the next year and providing updates to the Board of Education.

The West Hartford Board of Education is in the early stages of considering an adjustment of school start times, and Director of Secondary Education Anne McKernan provided members with the first report of the work the 22-person committee has been doing since it began meeting in mid-September.

During the public communication time at the beginning and end of the Board of Education meeting, more than a half dozen residents shared their opinions with the Board.

“The science is not in debate,” said Dr. Susan Rubman Gold, a clinical psychologist with the Sleep Disorders Center at the Hospital of Central Connecticut who has also met with the committee. “Biologically their brains are programmed to fall asleep late and sleep late,” she said of high school students. “I hope that West Hartford can be a leader in making the important change to school start times.”

Judy Wyman Kelly read a statement from Dr. Sarah Raskin, who was unable to attend. Raskin, a professor of psychology and neuroscience at Trinity College, said in her statement that the current start times are “a public health disaster” and that the impact of sleep deprivation hits minority students the hardest.

Lance Goldberg, who teaches government and at Farmington High School said he is “thrilled we live in an innovative school district that is taking look at this issue.” Goldberg said that students in his later class have average grades that are 4-6 points higher than in his first period class, and lower absence rates.

Bruce Putterman, who was on the Board of Education when the school start issue was last decided said he was in favor of making the change at the time but that the data has become even more compelling and there is a greater “sensibility and focus on mental health.” The addition of lights and turf at the high schools make athletics less of an issue now, he said.

West Hartford has considered the issue of changing school start times in the past, most recently after a study in 2003-2004 when the Board of Education chose not to adopt a change – primary reasons including the presumed negative impact on middle schoolers who, under that proposal, would have had to start school 15 minutes earlier, as well as the impact the change would have had on athletics.

There are 22 members of the “Rethinking School Start Time” Committee, McKernan said, a cross-section of stakeholders that includes six parents (at least two students in elementary, middle, and high school) and split between the Hall and Conard districts of town, teachers from all school levels, a school psychologist, two principals, two department supervisors including one from the performing arts, the director of athletics, and one student from each high school.

The overall committee is divided into eight subcommittees, each that will conduct an in-depth study into specific aspects of the topic, including sleep research, academic impact, lessons learned from early adopters, stakeholder impacts, professional learning, transportation, impact on other programs in town, and athletics.

The report presented by McKernan on Tuesday is attached below as a PDF, and an information page has also been created on the Board of Education’s section of the West Hartford Public School’s website that will be kept updated. Subcommittees are meeting regularly and the full committee will be meeting every few weeks, with future updates to the Board scheduled for Feb. 21 and May 15.

Surveys of stakeholders will be launched in the late winter, McKernan said.

“We’re very interested in what we call lessons learned from early adopters,” districts that have already made the change in start time, McKernan said. In addition to the districts within the state, that operate under the same regulations as West Hartford, the committee will consider results from out of state.

“Sleep research findings – the health benefits are clearly strong in the research,” McKernan said Tuesday night, and are supported by the research of more than 50 organizations that indicate a shift during adolescence in circadian rhythms based on “biological factors, many beyond the control of the adolescent.” According to research, she said with a delayed start time a student “will sleep longer, not minute-for-minute, but will sleep longer.”

Board members had several questions, and Vice Chair Carol Blanks asked if there is before and after data about the impact of later high school start time on academics. Assistant Superintendent for Curriculum, Instruction and Assessment Paul Vicinus said that this initial report to the Board was “really intended to frame for the research questions,” and while that information is not available now, it will be considered by the subcommittees.

Board Chair Cheryl Greenberg asked the committee to also consider middle school students, and where they should be with respect to their melatonin release and sleep schedules.

Board member Deb Polun suggested that the committee talk to the organizations that run before and after school programs to see what their capacity would be to accommodate a change in start times for elementary school students, and Mark Zydanowicz suggested looking into the impact of technology, particularly “blue light,” that could be impacting students’ sleep.

The Board’s student representatives were asked for their opinions, and both gave resounding endorsements for the benefit of later high school start time.

Maddy Pliskin, a senior at Hall, said that she thought it was bad having gym first period for her first three years of high school, but that was so much better than this year when she has AP Economics first period. “We all feel our grades aren’t representative of our ability,” she said of her classmates.

Grace Andrews, a senior at Conard, said she has AP Calculus first period and thinks her struggles are definitely related to the timing. “It will make an effect if we push it back … I think almost every student will attest to that … I’m thankful that we have such a progressive town,” she said.

Superintendent of Schools Tom Moore said that once the committee gives the Board its final report the results will have to be looked at in totality. “There’s not going to be an ‘aha smoking gun’ that says let’s do it because of this,” and at the same time there won’t be an “aha smoking gun” that that says not to do it either, Moore said.

During the public comment section at the end of the meeting, Hall student Jason Buckman said that he has been conducting a sleep survey, and so far has 230 respondents from just Hall. Results so far indicate that 90 percent of students report that they could “use a lot more” or “could use more” sleep, and only three of the students said they wake up naturally without an alarm or person waking them up. More than half reported that they always or often have trouble waking up on school mornings, Buckman said. He plans to expand the survey to Conard as well.