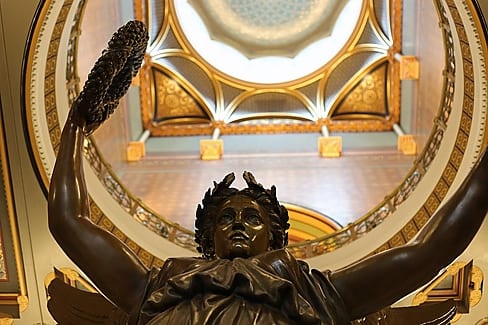 Legislative and executive branch budget analysts say Connecticut has recovered 40% of the revenue it was expected to lose in April.

The part of the state income tax which includes capital gains and other investment earnings came in much higher than expected thanks to a robust stock market.

It improved the state’s financial picture, but Connecticut is by no means out of the woods yet based on the latest revenue forecasts.

“Today’s Consensus Revenue forecast demonstrates the delicate balance we are currently facing, as our revenue collections and economic indicators are exceeding the estimates we set forth near the start of the pandemic in April, but there is uncertainty ahead as COVID-19 cases are rising,” Office of Policy and Management Secretary Melissa McCaw said. “As a result, we have improved our revenue estimates in the current fiscal year by $326 million from October’s estimate and by $875 million and $704 million in each year of the next biennium from the April forecast to reflect the reality of the revenue collections we have experienced and to take a conservative outlook on the future collections.”

But that doesn’t account for the increase in spending due to COVID-19. The consensus revenue forecast – a budget tool created during former Gov. M. Jodi Rell’s administration – only looks three times a year at how much revenue the state projects to collect before the end of the fiscal year.

Gov. Ned Lamont and the legislature still face a deficit of more than $900 million this fiscal year and shortfalls of $1.3 billion and $1.45 billion in each of the next two fiscal years.

They want an immediate meeting of legislative leadership “to begin addressing the state budget.”

“We need to meet to address the budget and also to discuss the reality of how close we are to the bonding limit already,” the trio said Tuesday. “Because the Finance Committee has yet to adopt updated revenue estimates in over a year, well before the pandemic, the state is ignoring what we know to be the reality of the current situation and putting us dangerously close to the bond limit. This must be discussed.”

They said they have seen how the scenario has played out in the past.

“The problem with waiting until April to take any action on the state budget is that it allows problems to worsen to the point where we will be left with few choices when it comes to balancing the budget. We have seen that play out before,” the Republicans said.

Democratic lawmakers in the House are taking a more patient approach to the budget.

Incoming House Speaker Matt Ritter said with $3.1 billion in the Rainy Day Fund, they’re not going to have to make as many budget adjustments as former Gov. Dannel P. Malloy had to make when he took office in 2011.

Rep. Jason Rojas, who will be the next majority leader, said it’s their responsibility to explore all the potential budget options, including legalizing marijuana and expanding sports gaming, but it’s hard to say what’s going to happen before April when the revenue numbers are calculated after tax day.

Ritter said the budget process is a very long process and they won’t be making any of these hard decisions until April.

“We must face the pandemic head on and that includes prioritizing funding for core needs such as mental health care, substance abuse treatment, protection for seniors, education, job creation, and basic safety net supports. To best ensure that funding is properly prioritized for these needs, we cannot put off addressing our budget issues and shortfalls,” the Republicans wrote in a letter to Lamont.