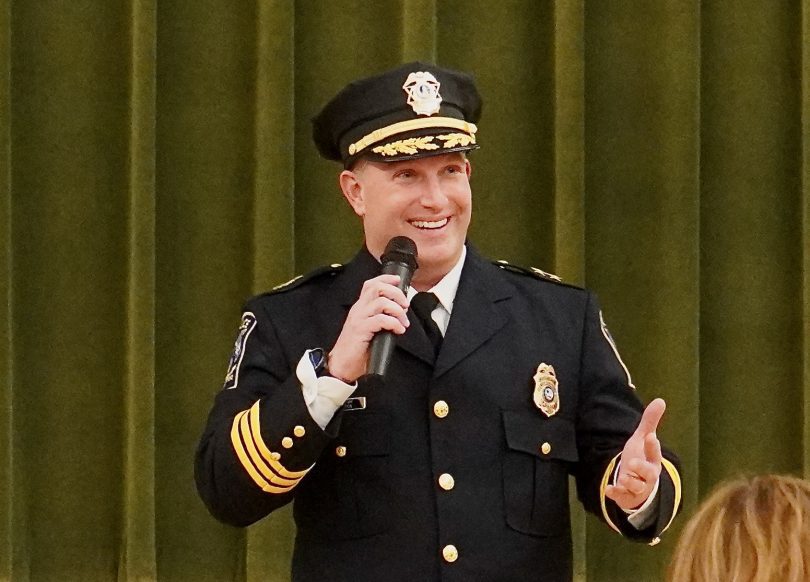 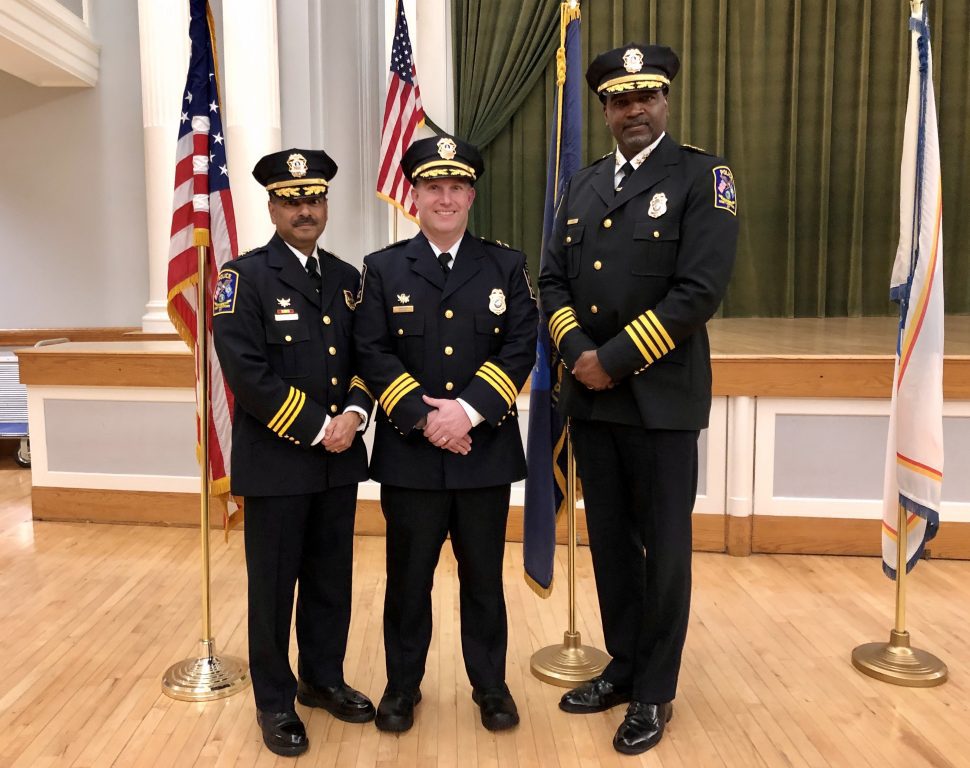 The West Hartford Police Department held a swearing in ceremony on Monday afternoon for Assistant Chief Robert “Rob” Riccobon, officially welcoming him to his new role.

Riccobon has been a member of the West Hartford Police Department since April 2002 and has been a special aide to Chief Vernon Riddick since 2019. The assistant chief position has been vacant since Dan Coppinger retired in January 2021.

“There is nothing traditional about Rob,” Chief Vernon Riddick said when asked about the non-traditional choice of promoting someone to assistant chief from the rank of patrol officer.

Ever since Riddick became chief in May 2018, “[Ricccobon] made the unusual usual, he made the impossible possible.”

What Riddick said he has been most impressed with is Riccobon’s “ability to push past boundaries, his ability to not just take what you see in front of you and think that’s the end, his ability to be a visionary, his creative capacity. … He didn’t just assist programs, he started programs. Ingenuity, commitment, courage, fortitude, the ability to overcome obstacles and go forward.” 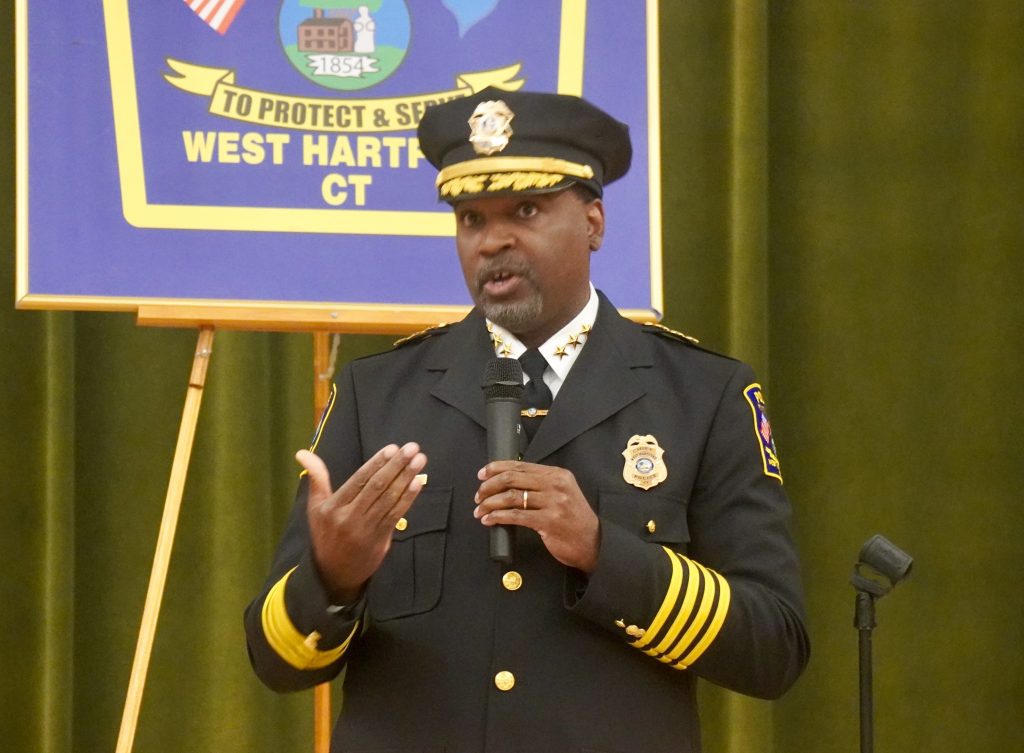 Riddick said Riccoban applied for the assistant chief job when it was vacant two years ago, when Assistant Chief Larry Terra was hired. “And I quickly rejected him,” Riddick said, but rather than developing an attitude, he said that only seemed to make Riccobon work even harder.

Riccobon is synonymous with excellence, Riddick said. He’s not afraid to share his passion, or to let the chief know when something needs to be done better.

“Non traditional? It’s actually tradition,” Riddick said. “See, traditional is somebody who works hard, somebody who is committed, somebody who strives for excellence and just doesn’t speak it but lives it, and holds himself to that level. That’s tradition, that’s what Rob Riccobon represents. And family.”

The chief said Riccobon doesn’t need to be asked to do something. “He just gets it done.” Riccobon earned this position, Riddick said. 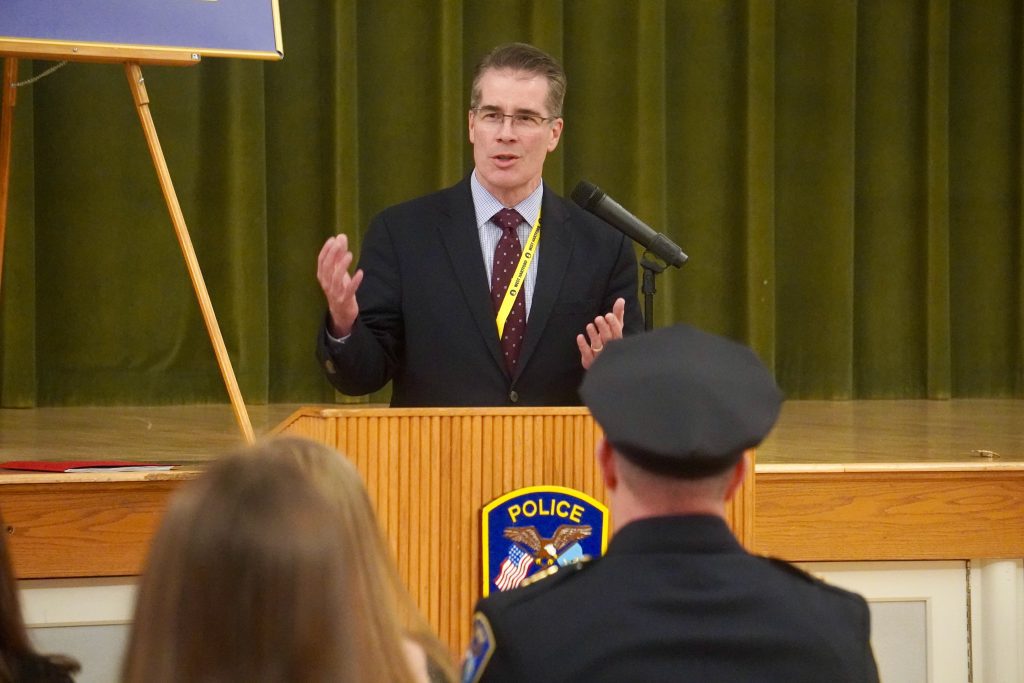 Others shared words of praise for Riccobon as well. Town Manager Matt Hart said he believes Riccobon will bring so much to the assistant chief position, and he really has a great connection to the community. 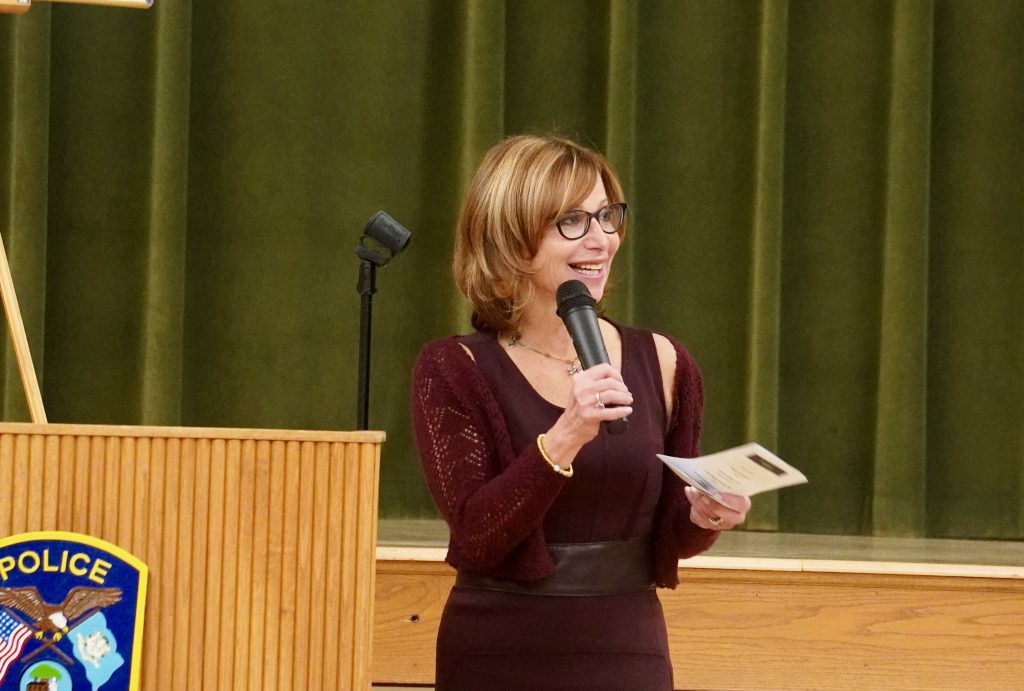 Before administering the oath of office, Mayor Shari Cantor also congratulated Riccobon. “His warmth, he’s genuine, and he is passionate and caring,” she said.

“He’s grateful and motivated to make himself better and to make all of those around him better. That’s coaching,” said Cantor, noting Riccobon’s success also as a swimmer and coach. She said she is also grateful for his commitment and loyalty to the town. 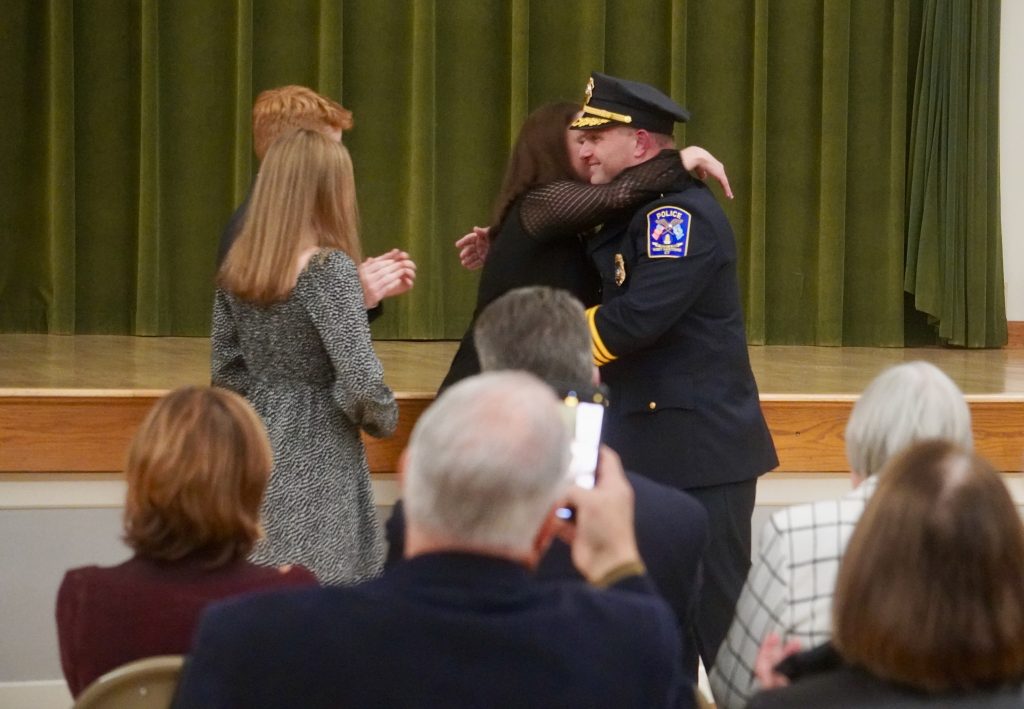 Assistant Chief Rob Riccobon hugs his wife, Katie. His children Ruthie, who pinned him with his new badge, and Robert are at left. Photo credit: Ronni Newton

Riccobon was pinned with his new badge by his daughter, Ruthie, and and also joined by his wife, Katie, and his son, Robert.

He spoke to the crowd that attended the ceremony, which included his friends and family, town staff and members of the Town Council, current members of the West Hartford Police Department, and retirees.

He said all he’s here to do, “is support the men, the women, the leadership, and the people who live in the Town of West Hartford.”

The Riccobon family has a saying in their household, he said, “to stay humble, and to stay hungry … not resting on your laurels.”

He said he will always be there to help the department get better. “I’m humbled, I’m hungry, and I’ll start hitting the ground running tomorrow,” Riccobon said. 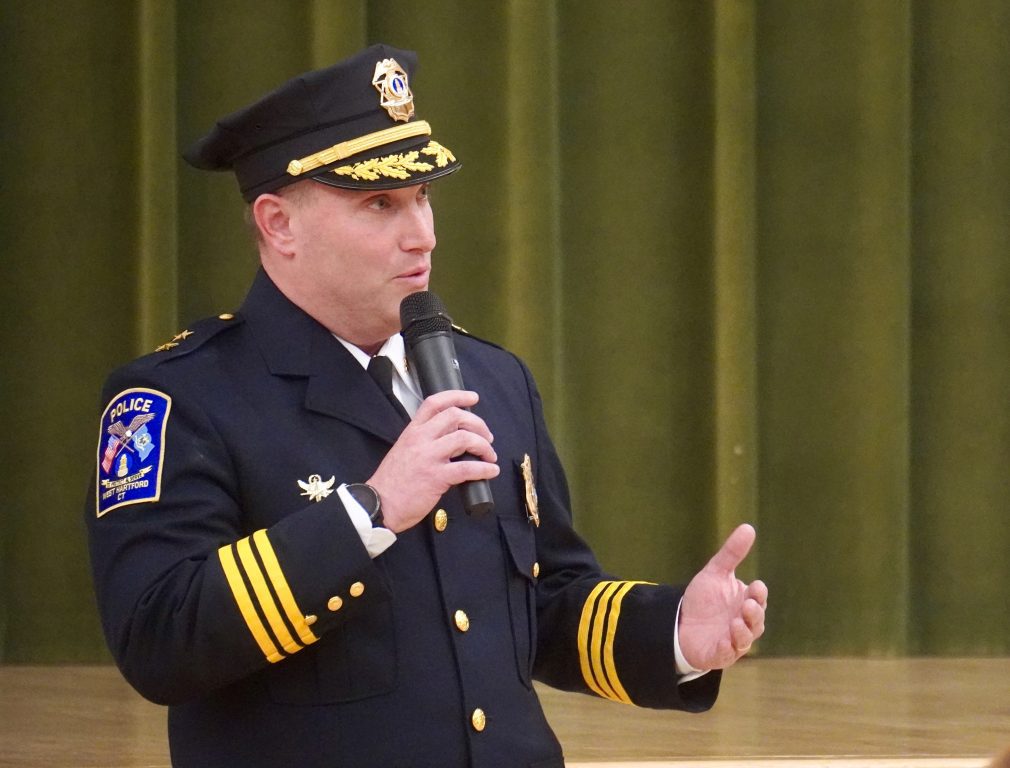 Terra shared with the audience Riccobon’s bio, and his extensive experience and accomplishments with the West Hartford Police Department and in the community.

Born in Brooklyn, Riccobon grew up in Monroe, NY, where he graduated from Monroe Woodbury High School and was recruited to swim for Central Connecticut State University, where he earned his bachelor’s degree.

At his graduation from the Connecticut Municipal Police Academy in Meriden, “due to his inherent ability to relate to everyone and his leadership qualities, he was chosen by fellow academy classmates to give the commencement speech at the 291st training session graduation,” Terra said.

His assignments in the nearly 20 years with the police department since then have included the Patrol Division, Emergency Services Unit (SWAT), Community Relations Division, Training Division, and membership on the original Citizens’ Complaint Review Board, as well as his most recent role as special aide to the chief. 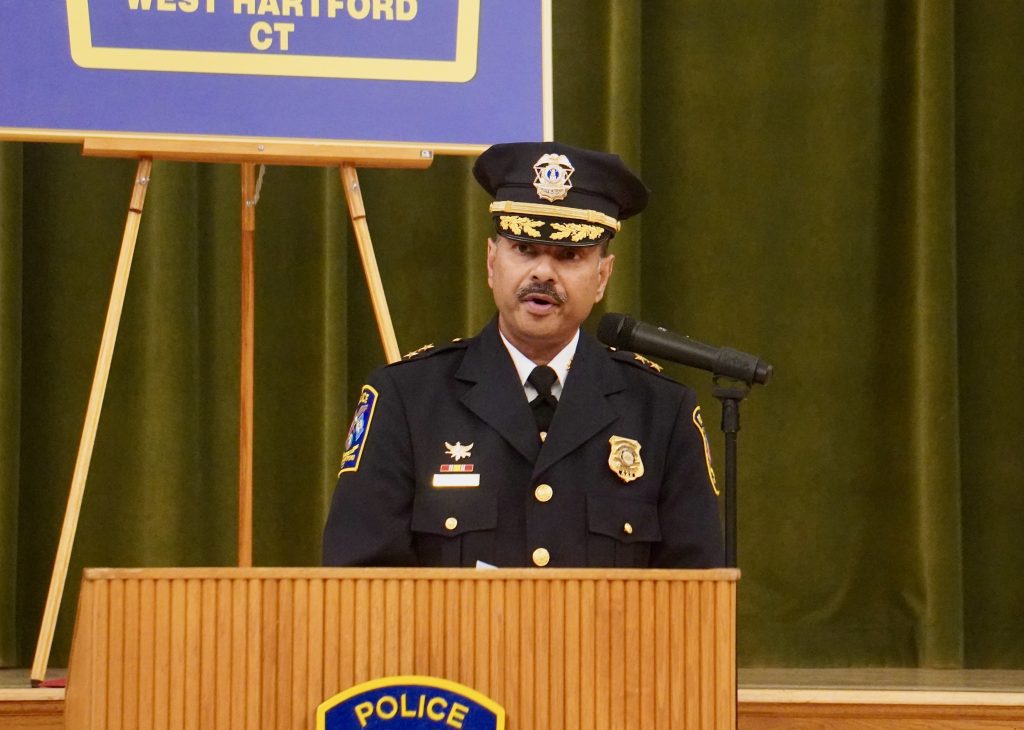 He was instrumental in the development of the Connecticut SWAT Challenge, which now attracts teams from throughout the country, established and directed the inaugural College Police Academy, and the Citizens Police Academy, Terra said. He’s helped make West Hartford Police one of the top departments supporting Special Olympics, and worked with CCSU’s Department of Criminology and Criminal Justice on the development of a master’s degree specifically for law enforcement.

Riccobon has continued his involvement with swimming, and since 2018 has been a member of the International Swim Coaches Board of Directors. He has been a certified USA Swimming coach for 30 years, and is the founder and head coach of the now-130-member West Hartford Aquatics Team (“WHAT” Swimming) – one of the top 200 clubs out of 3,600 in the United States. Many members of WHAT Swimming attended the swearing in.

Lt. Tom Lazure served as emcee of the ceremony, and Dana Hallenbeck delivered the invocation. 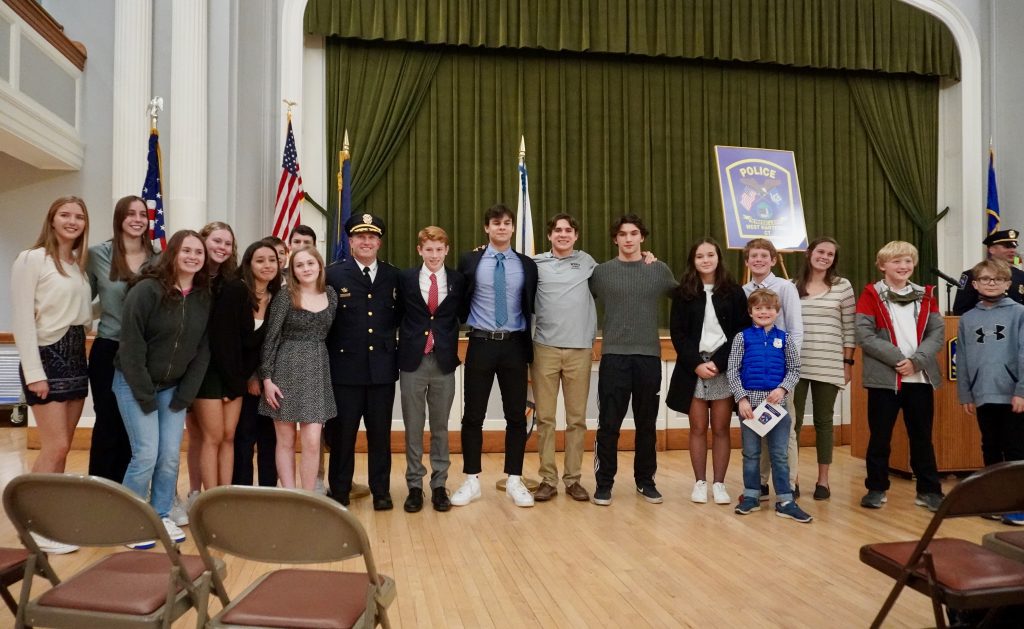 Members of WHAT Swimming attended the swearing in of their coach, Assistant Chief Rob RIccobon. Photo credit: Ronni Newton 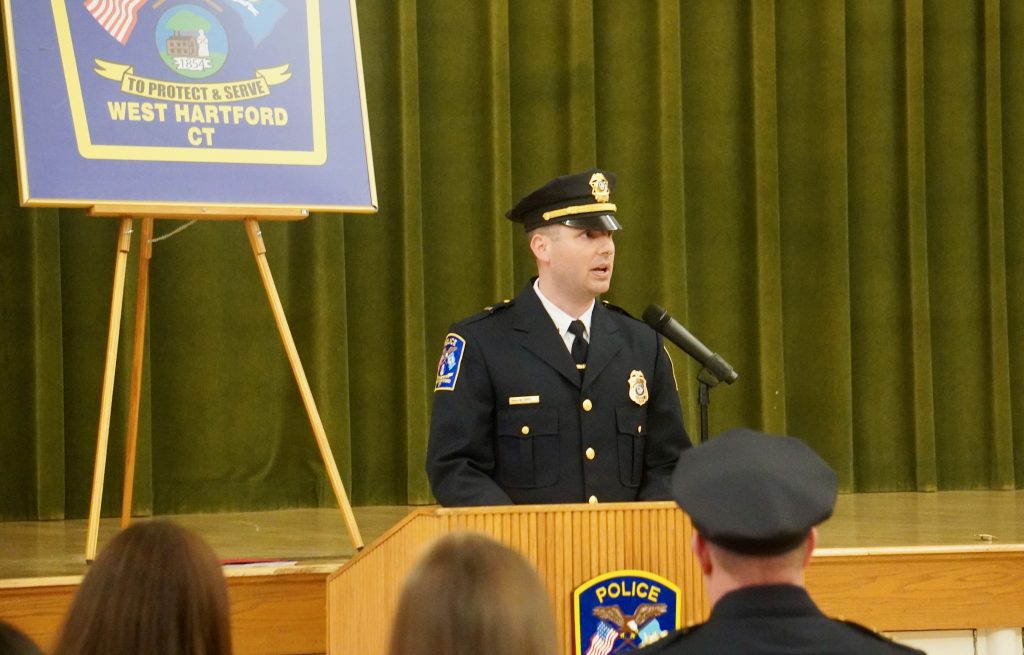 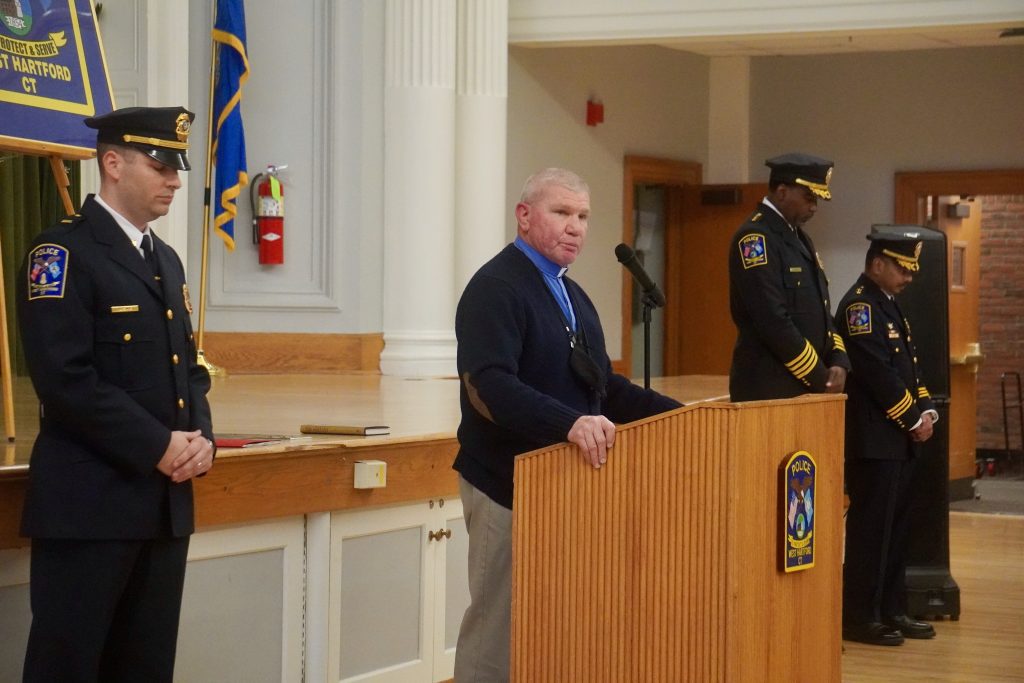 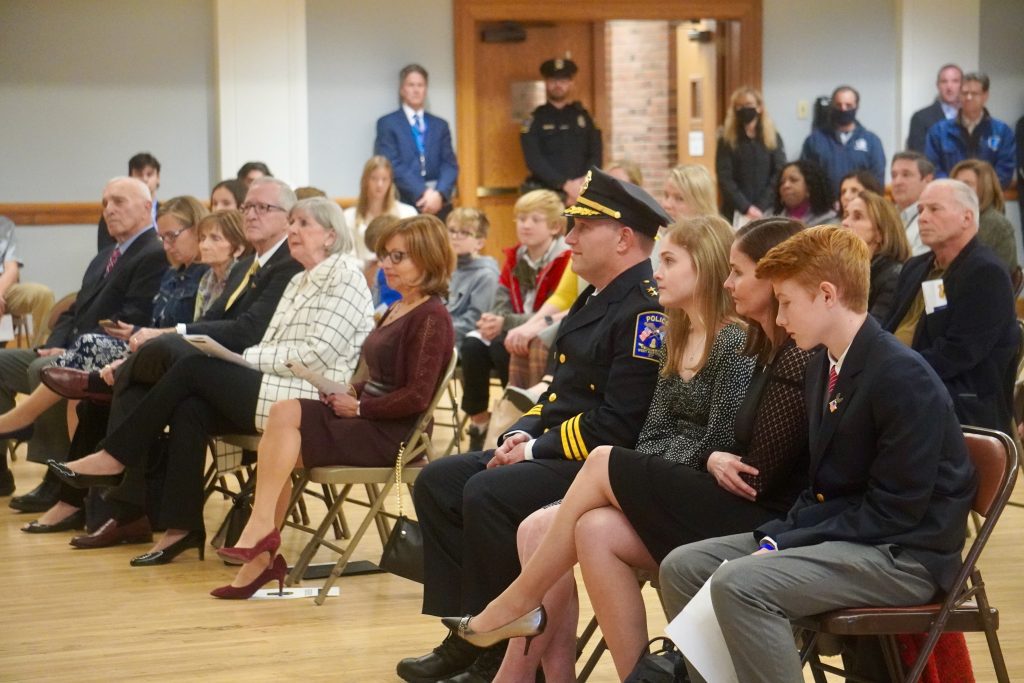 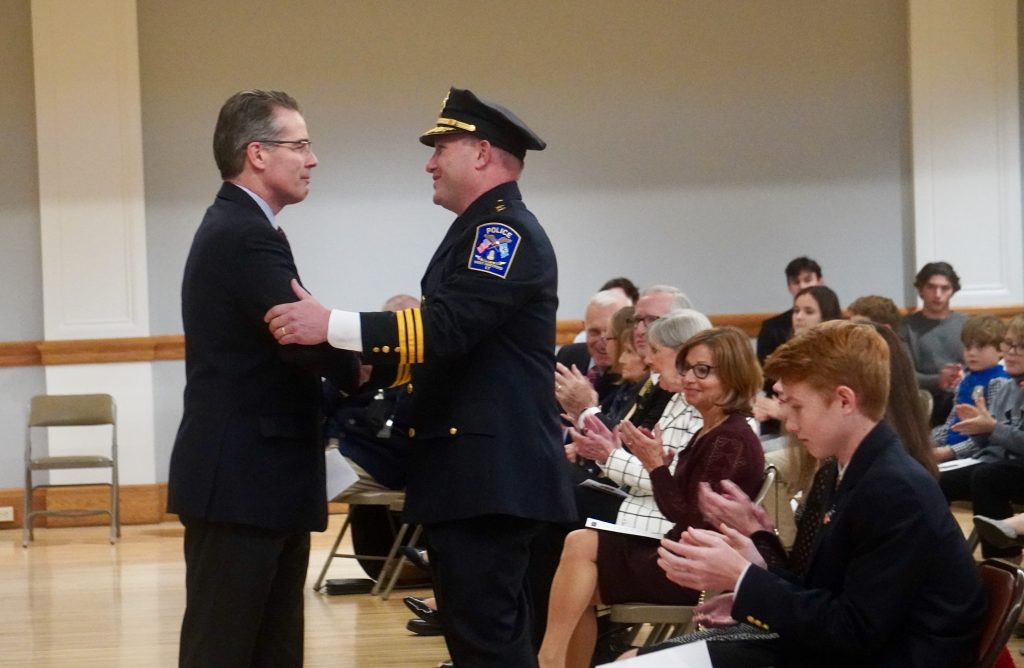 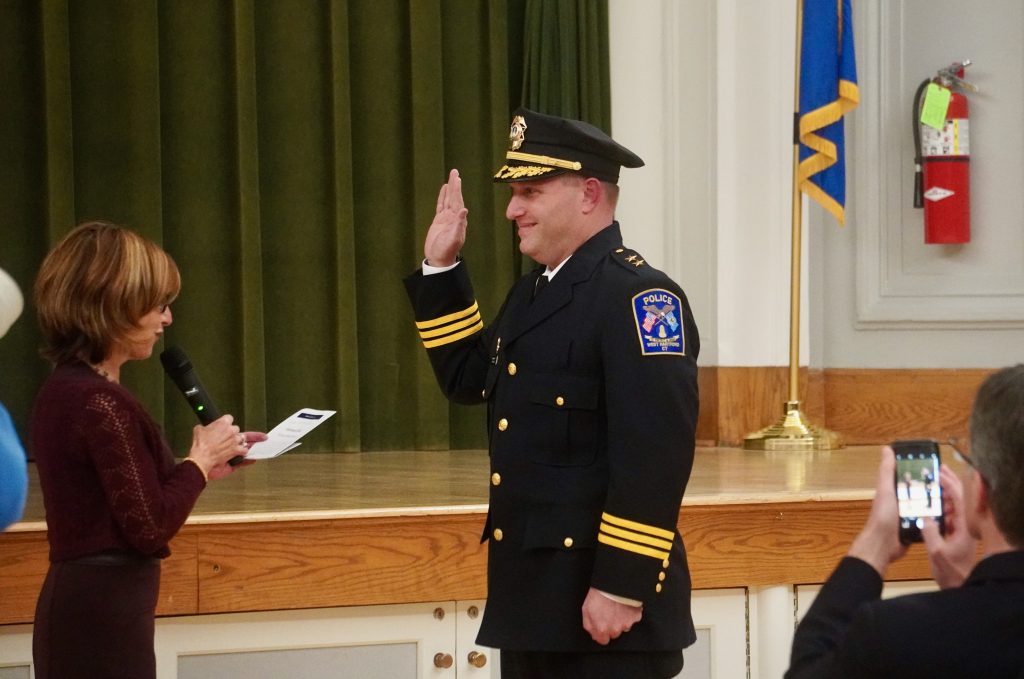 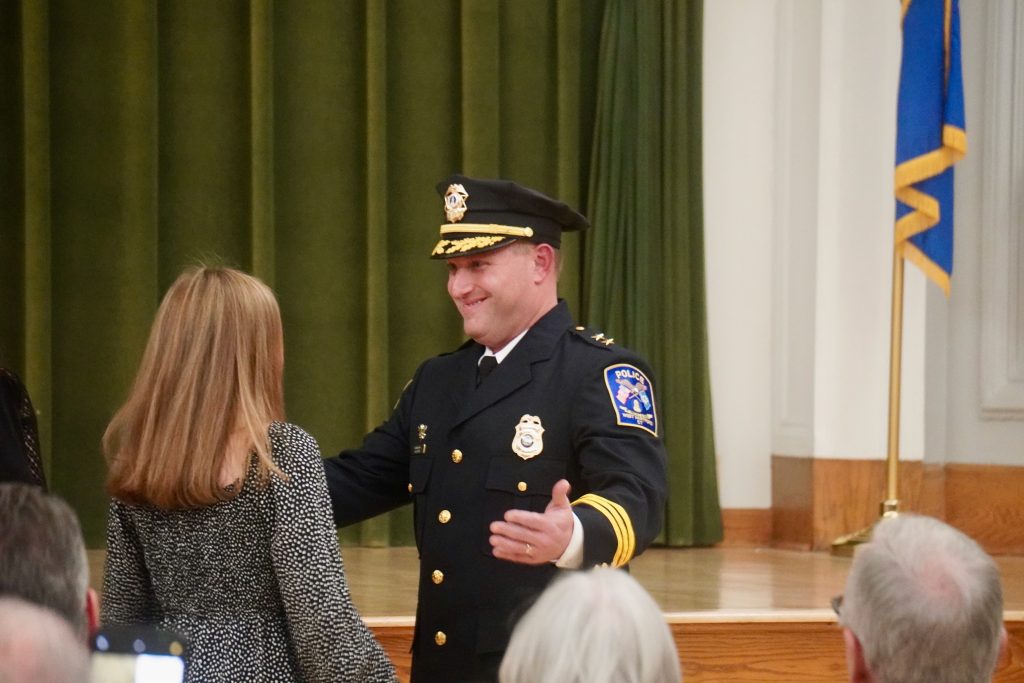 Assistant Chief Rob Riccobon hugs his daughter, Ruthie, after she pinned him with his new badge. Photo credit: Ronni Newton 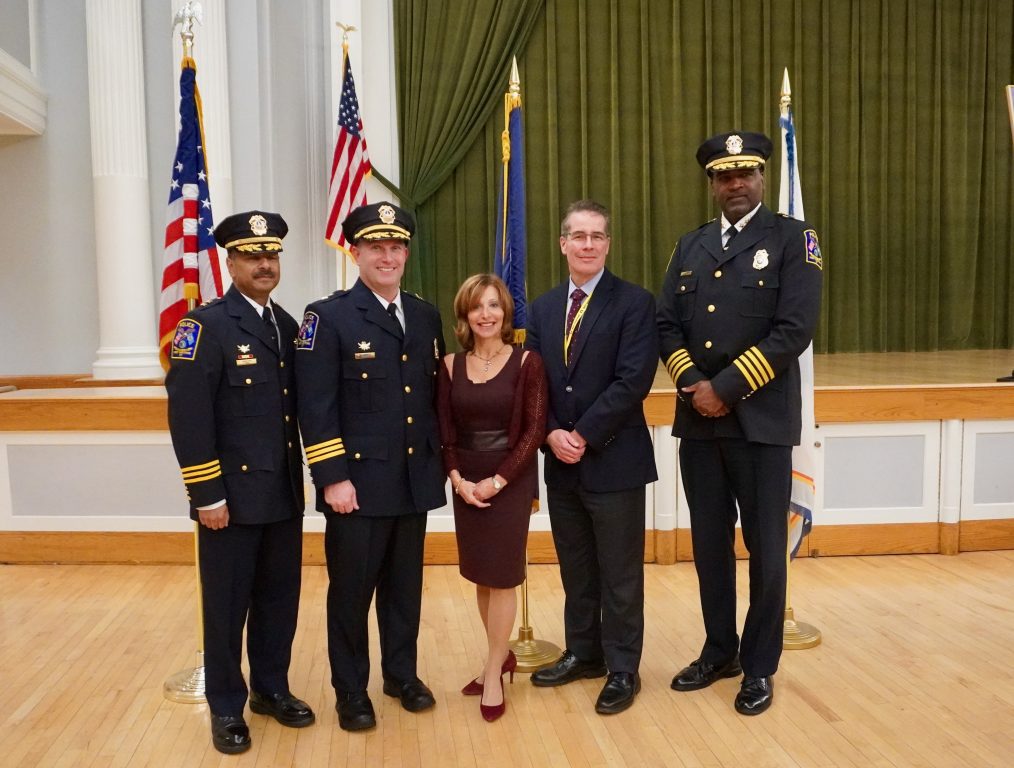