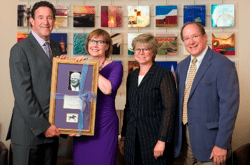 The Ron Foley Foundation has raised more than $1 million to fight pancreatic cancer, and programs at Hartford Hospital have now been renamed to honor the Foundation’s support.

Major milestones and successes are being celebrated at the Ron Foley Foundation, a West Hartford-based non-profit that raises funds for medical research for pancreatic cancer, promotes public awareness and education about this deadly disease and provides direct financial aid to those suffering from pancreatic cancer.

The Foundation was established in 2010 in memory of Ron Foley of West Hartford, a respected business leader in the community and a former Travelers executive, who died from pancreatic cancer in 2005. Barbara Foley, the Foundation’s President and Ron’s widow, leads this volunteer-based organization.

To accomplish its mission of raising funds and awareness, the Foundation seeks donations from major corporations, small businesses, individual donors, and grants. A majority of the Foundation’s fundraising is through its keystone event Ron’s Run for the Roses, an afternoon gala held on Kentucky Derby Day.

According to Foley, “The record-breaking donations we received over the past six months have helped us reach a major goal and milestone. This year, with the support of so many dedicated patrons, our Foundation has successfully raised more than $1,000,000 since its inception.”

At this year’s Ron’s Run for the Roses, the Foundation was privileged to have Bob Patricelli as one of its event Honorary Chairs. Patricelli is the founder, chairman, and CEO at Women’s Health USA in Avon and also owner of Folly Farm. In his remarks at the event, Patricelli noted that Folly Farm would be celebrating its 100th anniversary in five years.

In honor of the Farm’s centennial, Patricelli has pledged $50,000 to the Ron Foley Foundation ($10,000 annually for the next five years) through the Robert and Margaret Patricelli Family Foundation. “We were overwhelmed by this generous show of support.” said Foley. “This is over and above the role Folly Farm has played over the years in making Ron’s Run for the Roses truly spectacular. I can’t thank Bob, his family, and all the people of Folly Farm enough.”

For more information about the Foundation, please contact them at 860-521-0500, [email protected] or visit their website www.ronsrun.org. The Foundation’s office is at 1000 Farmington Avenue, Suite 108A, West Hartford, CT 06107.