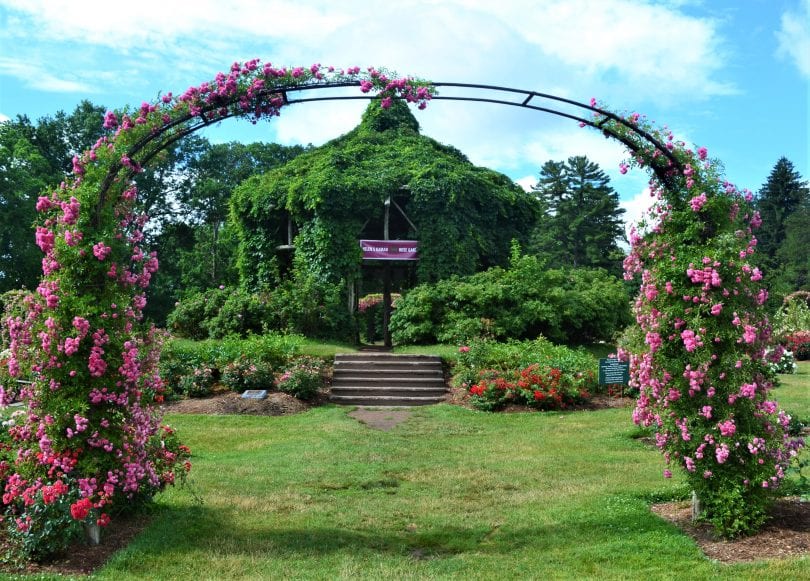 The Elizabeth Park Conservancy has announced that the Kaman Foundation has provided a major gift and the rose garden will be named in honor of Helen S Kaman who died in 2010.

The Elizabeth Park Conservancy is pleased to announce a major gift from the Kaman Foundation to name the rose garden in honor of Helen S Kaman.

The Conservancy was formed in 1977 as the Friends of Elizabeth Park, to save the historic rose garden from almost certain demolition. Mrs. Kaman served as the first president of the newly formed organization that today operates and manages all the gardens and the greenhouses at the Park.

Christine Doty, the current President and CEO of the Conservancy, said that “the Conservancy is thrilled to be able to honor Helen S Kaman, an extraordinary individual who was instrumental in saving our famous and beloved rose garden,” and that “we are grateful to the Kaman Foundation for this generous gift in her honor.”

In 1894, Charles Pond donated his estate to the City of Hartford to be named a public park in honor of his wife, Elizabeth. In 1897, the City of Hartford hired Theodore Wirth as the Park’s first superintendent who designed the overall park and installed the roses garden in 1904. It is the first public rose garden in the country.

By the mid-1970s, the Rose Garden had fallen into disrepair, and the City of Hartford could not allocate funds to sustain it. At that time, the Conservancy was formed and, led by Helen S Kaman, found the resources necessary to “save” this public treasure.

Today, the rose garden is over two and a half acres and has more than 15,000 rose bushes and arches. It is the third-largest public rose garden in the country and is a top tourist attraction in the state of Connecticut.

Helen Kaman was an artist, engineer, and community leader of many talents and interests. She received her BFA at Edinboro College and became a certified aeronautical engineer at Penn State University in 1944.  She came to Hartford to work for United Technologies, doing design work on a new helicopter for Sikorsky Aircraft. It was there that she met Charles Kaman.

After the war, they quit their jobs and began the new company, Kaman Aircraft, and were pioneers in the helicopter industry. She served on the boards of Watkinson School and the Hartford Art School.

A painter all her life, she exhibited in many New England galleries. Helen Kaman had a keen interest in horticulture so it was only natural that she gravitated to Elizabeth Park. She understood that this new organization would not only save the rose garden but, in the long term, save the park. She understood the importance of urban public parks as a place for people of all backgrounds to gather, to get away from life’s problems, and to enjoy nature and outdoor beauty. Helen Kaman would be honored to have the garden named in her memory.