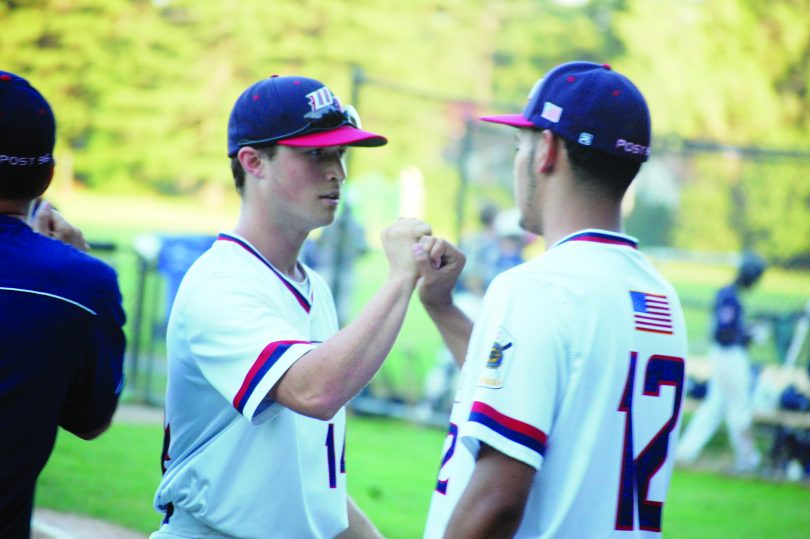 Ryan Farley, left, fist bumps with a teammate after making a good play in the field. Photo credit: David Heuschkel

Naturally, Ryan Farley was excited to be selected to participate in the Rawlings Showcase on July 2 at the Central Connecticut State University baseball field.

Players had to try out to make it the event, which is typically attended by a large number of college baseball coaches in search for talent.

“The first thing we did is the outfield portion and all my throws for the most part were very good. So if I did make it, it was going to be for my defense,” Farley said.

A center fielder for the American Legion team in West Hartford, Farley stood out for his defense in a 5-1 loss to Newington on June 28 stood. He had a rare double-double night for any outfielder – two terrific catches and two assists.

Unfortunately for Post 96, Farley’s glove work came after Newington broke a scoreless game with a five-run outburst in the fourth inning, which seemed to take as long to complete as the first three innings.

Farley threw a runner out at the plate trying to score from second on a hit to keep it 5-0.

With the score 5-1 in the top of the sixth, Farley sprinted toward the fence and made a leaping, over-the-shoulder catch with his back to the plate.

“Right off the bat I knew it was going over my head. So I just put my head down and ran,” he said.

Farley wasn’t done. In the seventh with a runner on first, he came charging in on a sinking liner and dove to haul in the catch. Thinking the ball was going to drop, the runner had strayed well off first base before retreating back. Farley alertly threw to first for the double play.

As a junior this past spring, Farley was the starting center fielder for Conard. He saw more action in left as a sophomore, but moving to center was an easy transition because he has played the position as far back as youth baseball.

“I felt pretty comfortable out there,” he said. “I’ve been working with a bunch of people and it’s gotten easier over the years. At Conard we had a pitching machine that blasted line drives at us.”

Farley said he takes more pride in his defense than offense, but he can hit the ball. In his first at-bat in a varsity game with Conard last year, he hit a home run against Avon. He went deep a second time later in the game.

In the age of specialization, Farley is a rare three-sport athlete in high school. Besides baseball, he plays football in the fall and runs indoor track in the winter.

Farley, who will be a senior at West Hartford’s Conard High School, said he would love to play baseball in college.

June 28 wasn’t a good night for the American Legion baseball team in West Hartford. He coach Jim Hungerford had no interest in talking about a 5-1 loss to Newington on June 28, or letting any of his players speak about the game.

Farley, when asked about whether his glove or his bat led to his selection for the showcase, said, “I think by far my defense. It’s using my speed to my advantage. Especially having my two other outfielders to communicate with, it’s a lot easier to have a better play in the field than hitting.

“I know the first thing we did is the outfield portion. All my throws for the most part were very good. So if I did make it, it was going to be for my defense. But then when I went over to the cage, I had a pretty good round [of batting practice] and I was pretty confident at the end of it.”