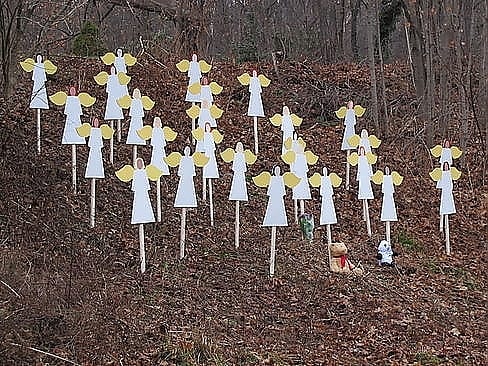 Monday was the eighth anniversary of the Sandy Hook school shooting, and this year’s vigil was held remotely due to the pandemic.

Due to the ongoing coronavirus pandemic, the vigil for the 20 children and six educators who were murdered by a gunman eight years ago was held remotely over Facebook Live. It is likely that the pandemic also has contributed to the record gun sales and continued gun violence that have served as a backdrop for the grim anniversary.

“In this day and age, with COVID, sadly we have more guns, legal and illegal, on our streets than ever before,” Gov. Ned Lamont said during the vigil. “We have extreme stress and isolation and distress and you see that reflected in many different ways. You see that in a spike in shootings in all of our major cities. Isolated murders in a lot of our small towns,” Lamont said.

Those conditions were not lost on other speakers. During the vigil, participants read the names of the 26 people who were gunned down in that small town elementary school. It took the speakers two minutes to slowly read those names. It took another 14 minutes for them to read the 180 names of people killed by gun violence in Connecticut so far in 2020.

In Connecticut, the Sandy Hook tragedy served as an impetus for a sweeping gun control law in 2013. Despite a huge outpouring of opposition from gun owners around the state, the measure passed the legislature with bipartisan support and was signed into law by former Gov. Dannel P. Malloy.

The shooting did not motivate Congress to pass similar legislation. Although members of Connecticut’s congressional delegation, including Senators Chris Murphy and Richard Blumenthal, have pushed for proposals like an assault weapons ban and universal background checks, the policies have not gained enough traction for passage.

“The cries of ‘Never again’ and ‘Not one more’ have gone unanswered by the failure to pass even one single federal law,” said Jeremy Stein, executive director of Connecticut Against Gun Violence.

“Connecticut is no safer with the strongest gun laws in the nation than states with the weakest gun laws because guns cross state boundaries and guns have no respect for state lines,” Blumenthal said during the vigil.

Blumenthal seemed emotional Monday as he recalled the night of the shooting as he and Murphy travelled to Newtown and met with the grieving families. He said he remembers talking to one mother in particular.

“‘When you’re ready, we should talk about what we can do about gun violence,’” Blumenthal said he told the mother. “She said through her tears, and mine, ‘I’m ready now.’ That kind of courage and fortitude will eventually enable us to conquer this monster of gun violence.”

Blumenthal and others said they were hopeful that their efforts would be more successful under the incoming administration of President-elect Joe Biden.

In the meantime, many remarked on a sad reminder that the victims, many of whom were just six years old when they were murdered, would be entering high school by now.

“Dylan [Hockley] and Daniel [Barden] and Avielle [Richman] and Ana Grace [Márquez-Greene] and their classmates would have been starting high school this year. It’s hard to believe it’s been that long. The pain feels so fresh, the loss undiminished,” Murphy said in a social media post.

“Those 20 children would be 14 or 15 years old, thinking about their prom, playing sports and thinking about going to college. They will never have the opportunity to marry their sweet hearts or have their own children,” Lt. Gov. Susan Bysiewicz said.

Newtown faith-based groups plan to hold a mass of remembrance, which will be broadcast on YouTube beginning Monday at 7 p.m.