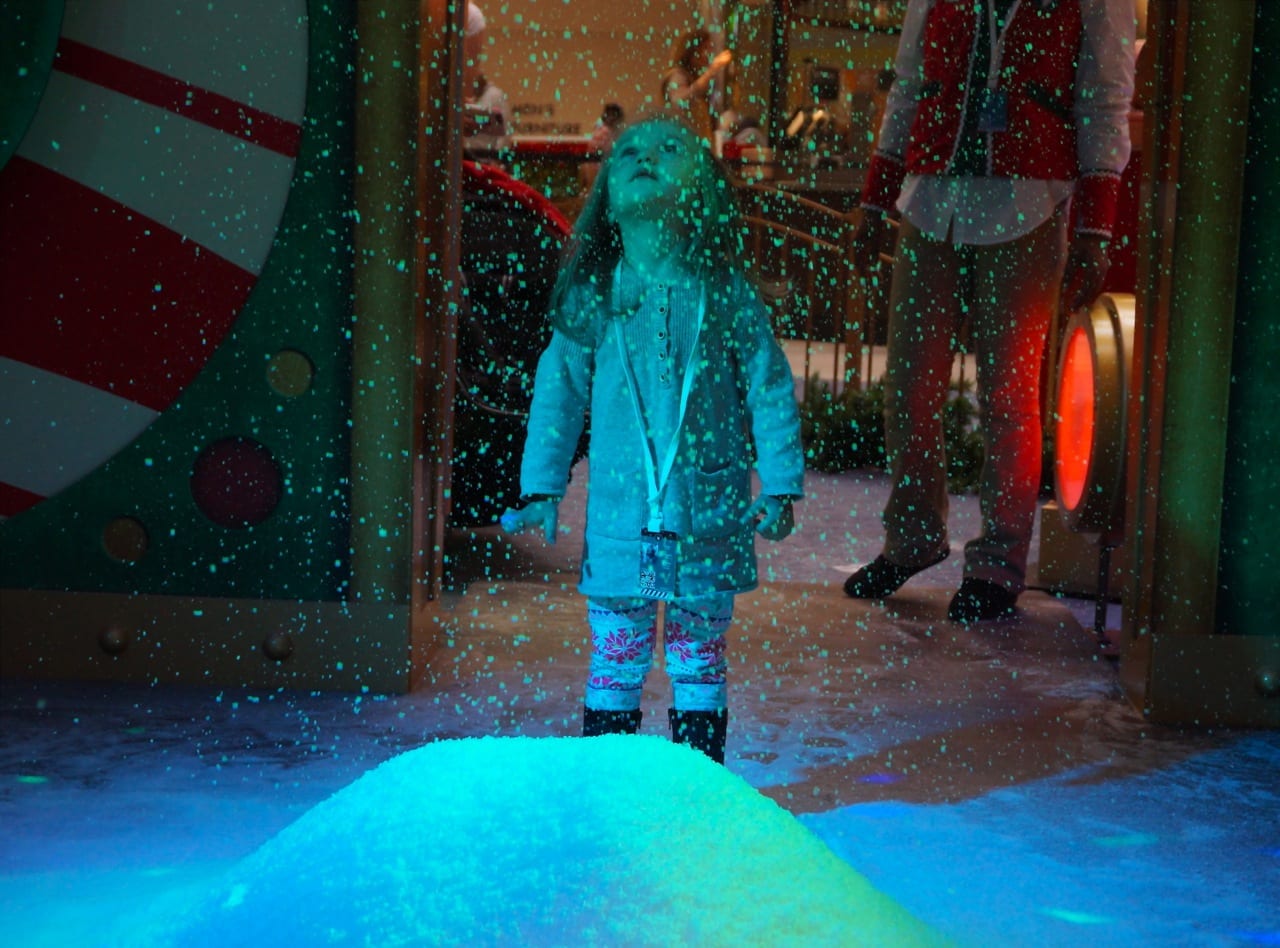 Emma Zoltobrzuch, 2, of Berlin is mesmerized by the falling "snow" at Westfarms. Photo credit: Ronni Newton

‘Santa’s Flight Academy’ has opened at Westfarms along with elves, snow, a variety of interactive experiences, and, of course, Santa Claus. 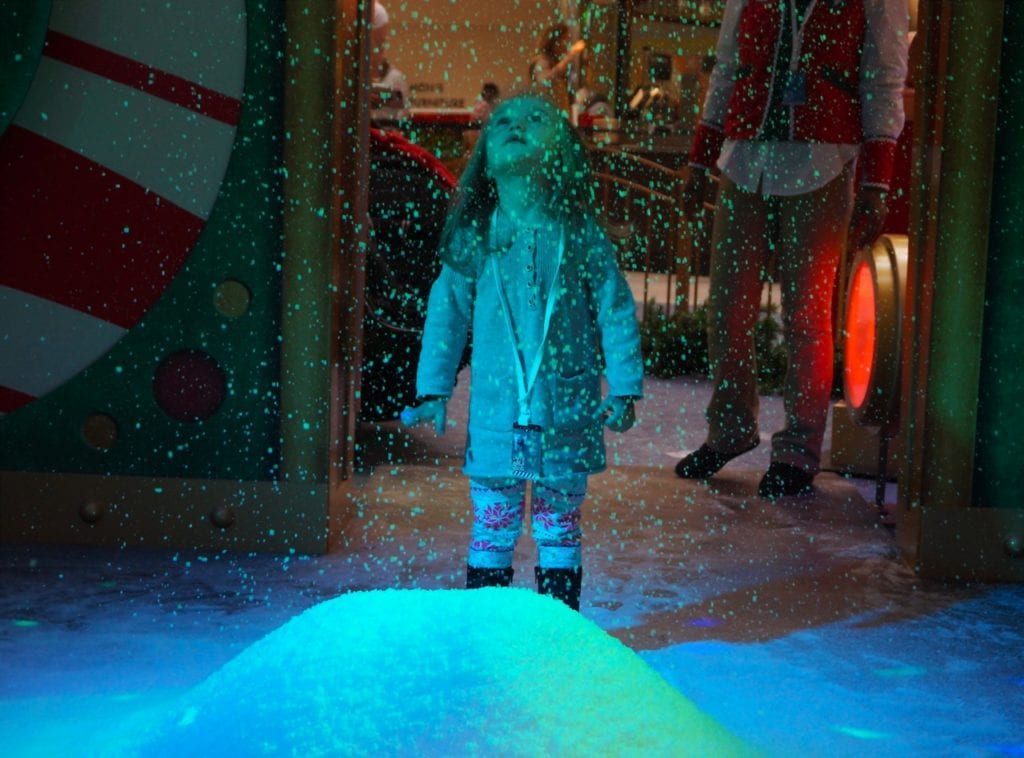 Emma Zoltobrzuch, 2, of Berlin is mesmerized by the falling “snow” at Westfarms. Photo credit: Ronni Newton

Westfarms has brought a brand new interactive holiday display to Center Court this year – an immersive experience that will give children a chance to become part of Santa’s flight crew as the man in red prepares to leave the North Pole for his annual journey.

“We’re really excited to have this new experience. I think kids will really love it,” Westfarms General Manager Kevin Keenan said. “Today technology has to be part of it. The days of Santa and a few benches are over,” Keenan said.

The state-of-the-art experience in a 3,000 square foot re-imagination of the North Pole begins at the kiosk where children get their flight crew badges and become “cadets.” Registration can be done in advance on Westfarms’ website or via the Westfarms app to save time, or upon arrival at Center Court.

The badges – which the children get to keep – include their photos and a codename like “Candy Cane.” The badge is coded so that each child receives a personalized experience, with his/her name appearing on screens at several locations. 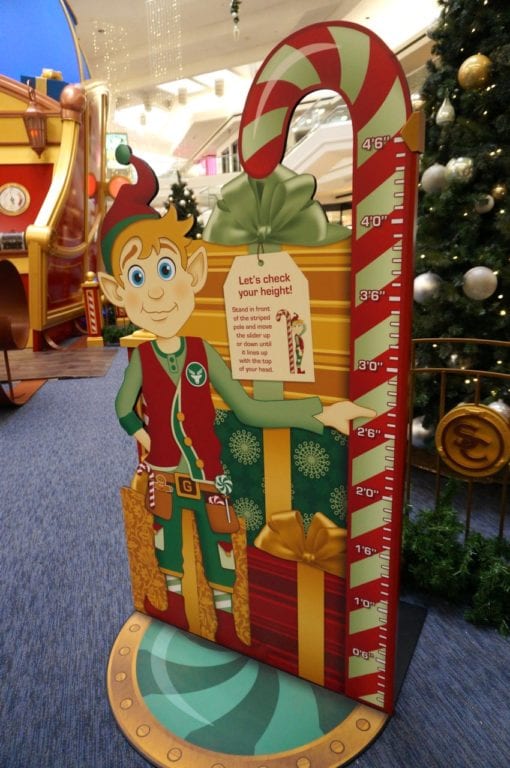 Children are ‘fitted’ for their flight suits based on height. Photo credit: Ronni Newton

Each child is then “fitted” for a virtual flight suit based on height (measured by a candy cane ruler) and foot size (in comparison to an elf, reindeer, or Santa), and then gets to virtually try on the suit for size as their image appears on the screen.

“Once your flight suit is on, you’re headed for the sleigh,” said Elf “Tooch,” as she provided a demo. Groups of 10 children will travel through the rest of the experience together, guided by an elf.

Other elements of the experience include a chance for all children to pull a lever that “loads” Santa’s sleigh, and then check to see his travel routes throughout the world light up on a map. There’s a light for Hartford (not West Hartford or Farmington), and the elf asks if the kids know where the nearest stop is.

“Uh oh, looks like a storm is coming!” says the monitor as a cadet checks the weather forecast before take-off. There are a choice of booster buttons to help add power to Santa’s sleigh so that he can take off through any kind of weather and “save Christmas,” by ensuring that all presents are delivered.

Before meeting Santa, the each child swipes his/her badge and gets a chance to dance in the snow – enchanted snow – in a giant snow globe nestled in the 22-foot sleigh that’s the focal point of the display. As the children dance in the falling snow, their names appear on the screen and seasonal songs like “Jingle Bells” play in the background.

The snow has been a feature of other recent holiday displays at Westfarms, but like the rest of the experience this year’s globe is brand new.

The snow is soft but not cold, and just in case a child tries to eat the snow, Westfarms spokesperson Amanda Sirica confirmed that it is non-toxic. “It melts when it hits water or a child’s mouth,” she said. The snow will be replenished several times a day. 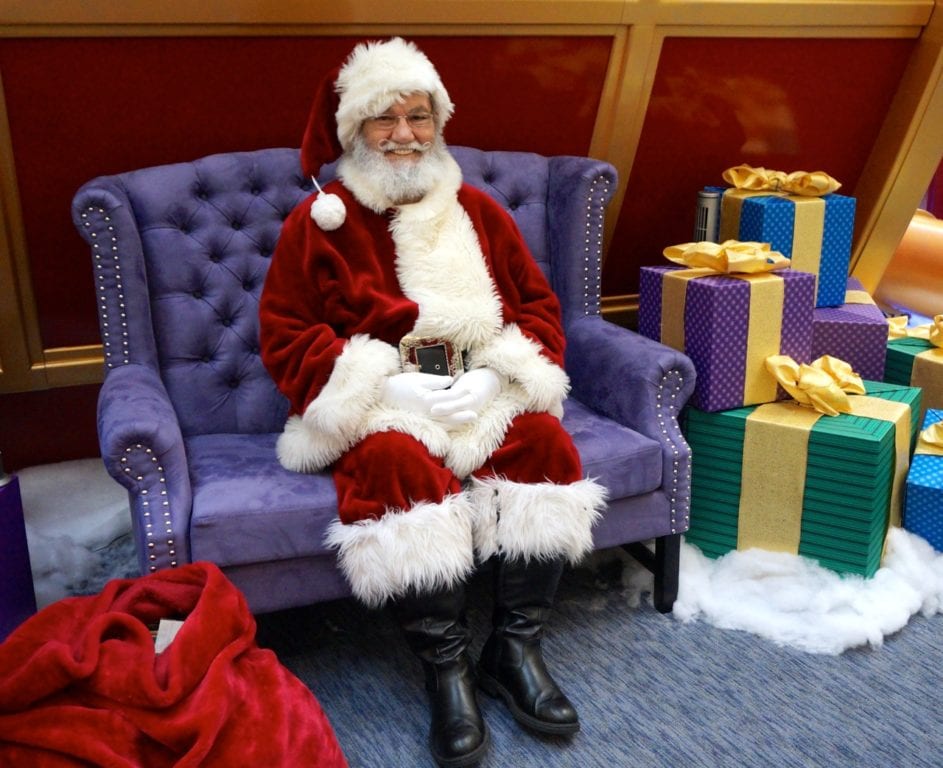 Santa is ready and waiting to meet children in the Santa’s Flight Academy experience at Westfarms. Photo credit: Ronni Newton

The final stop is a visit with Santa, and each child will receive a special gift “to personally thank them for heroically saving the day.”

“It really is a one-of-a-kind experience,” said Sirica, immersive with multiple interactive elements.

“We’re really excited that it’s a new tradition for people to experience at Westfarms. It gives them the ability to create new traditions with their families,” Sirica said. “When kids walk away they have this amazing memory of their visit with Santa Claus.”

While the visit to Santa’s Flight Academy is free, Sirica said that there is a “Santa’s Express Lane” option which will be available beginning Nov. 25 and will allow for pre-purchase of a variety of photo packages – including magical 3D pop-up holiday cards from Lovepop – and the ability to enter the experience in the special express lane.

Even if families don’t choose the Santa’s Express Lane, Sirica recommends advance registration through the app. “You can plan your entire experience before you come, and be in and out more quickly but still enjoy the experience,” she said.

“The holidays are a time for creating special memories and we’re confident children will be delighted with this new adventure that will surely become a tradition for years to come,” said Keenan.

Santa’s Flight Academy had a soft Thursday at Westfarms and will officially open on Friday, Nov. 11. It will remain open through Dec. 24. 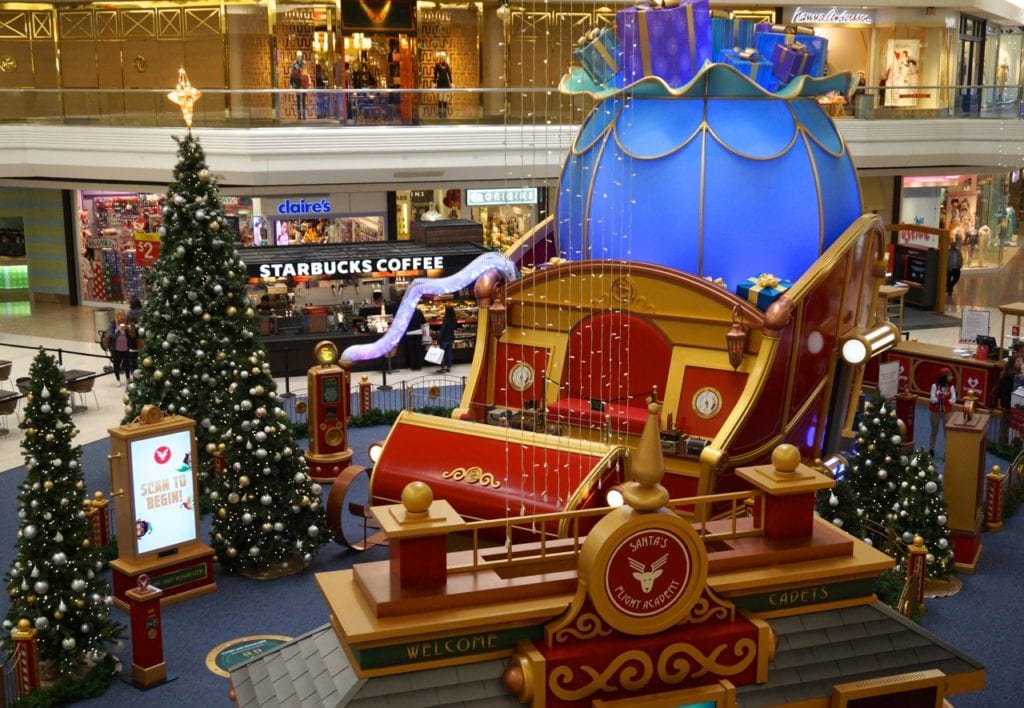 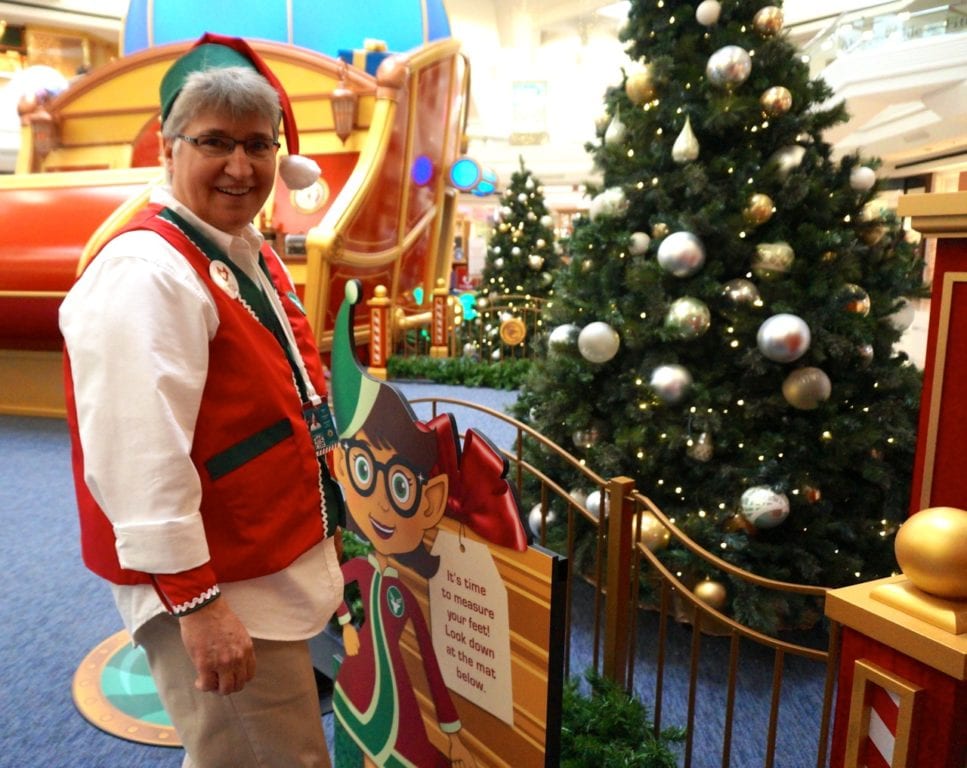 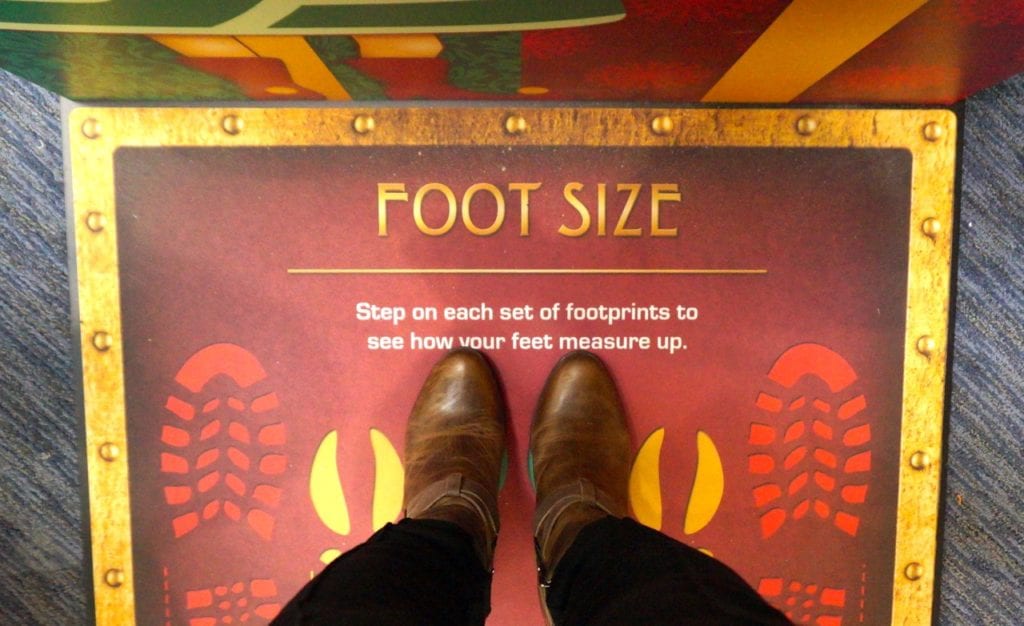 Children can measure their feet to see if they are elf-sized, reindeer-sized, or Santa-sized. Photo credit: Ronni Newton 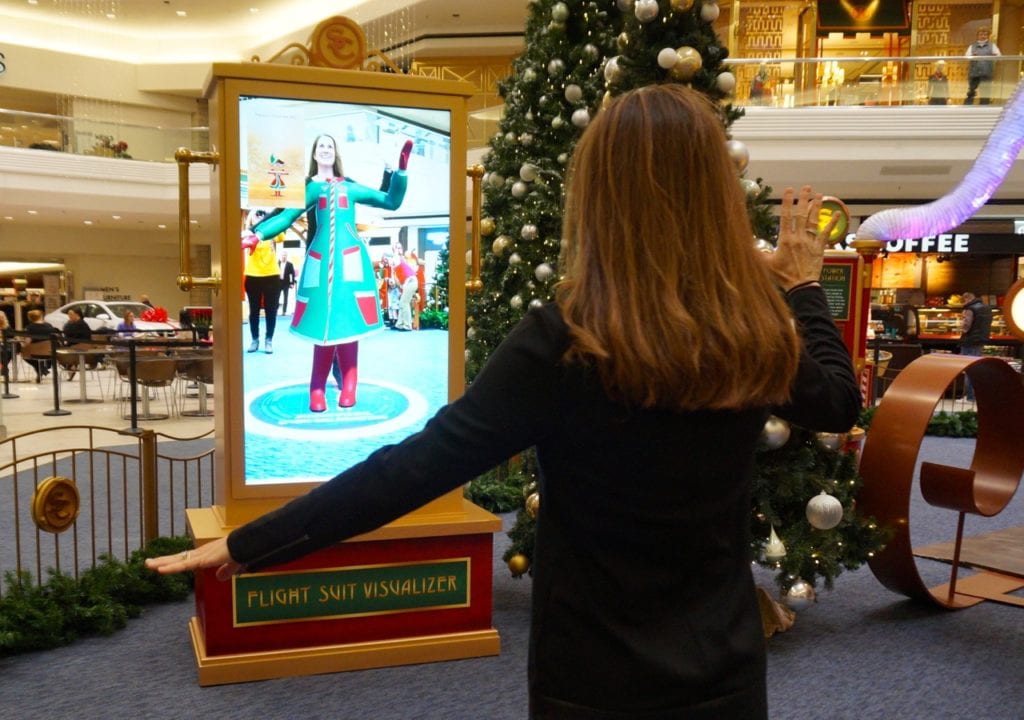 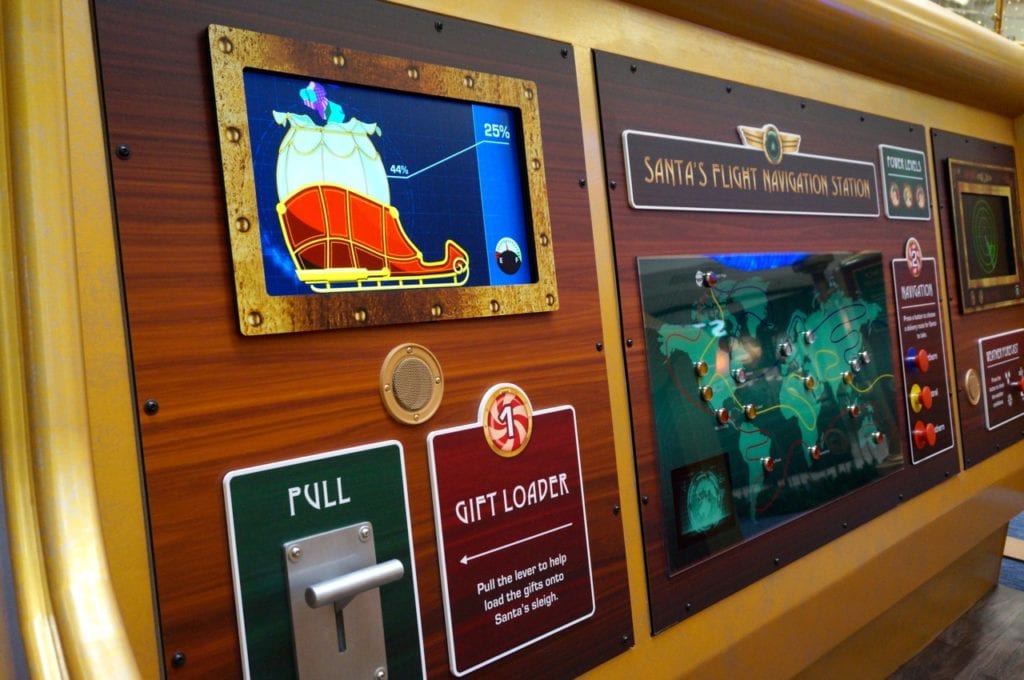 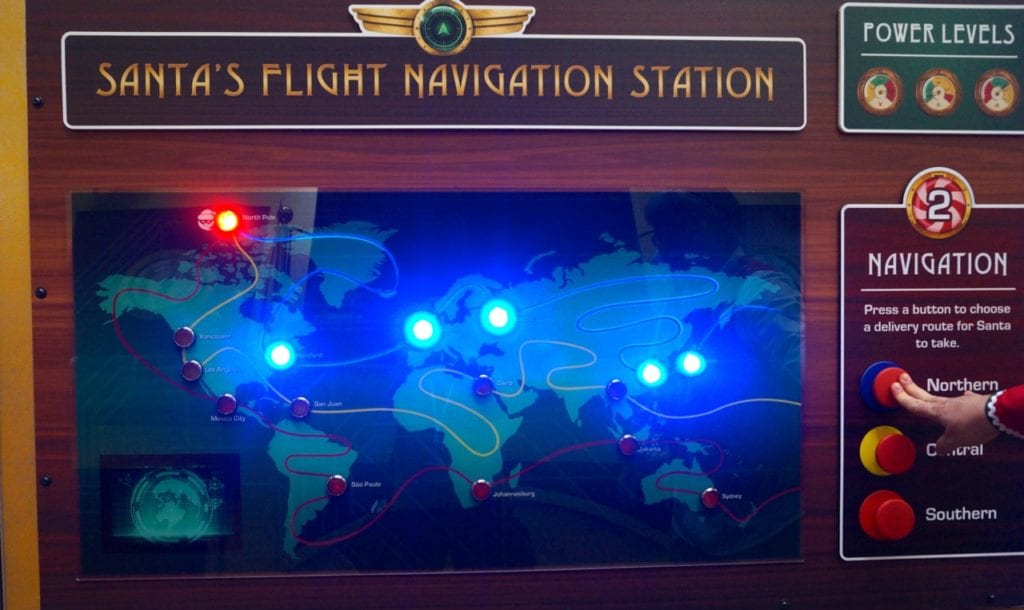 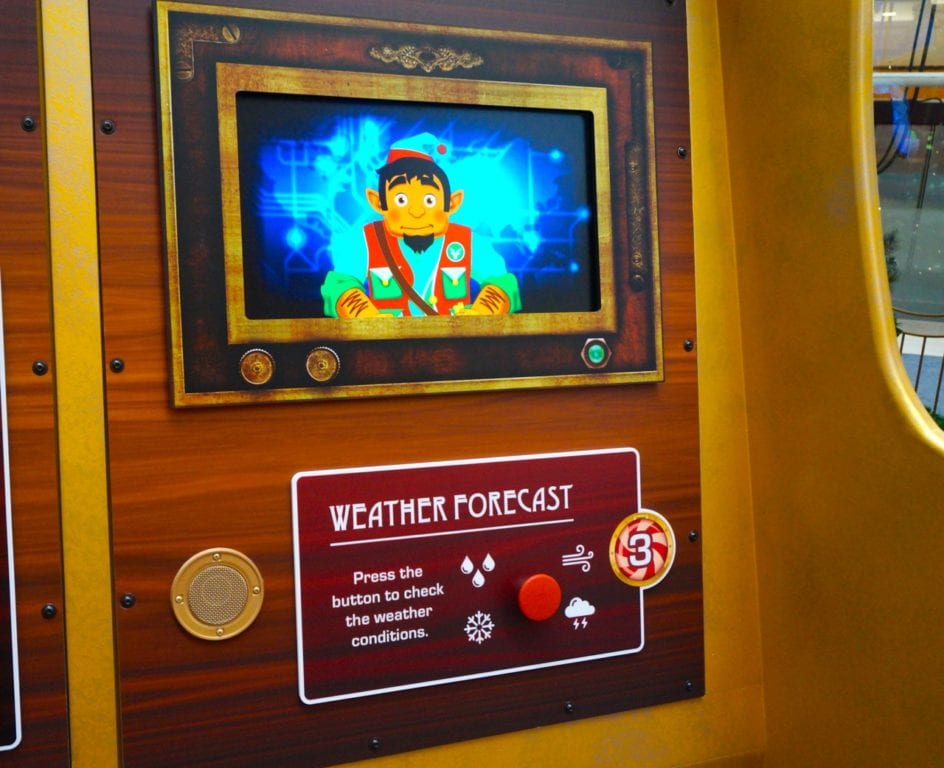 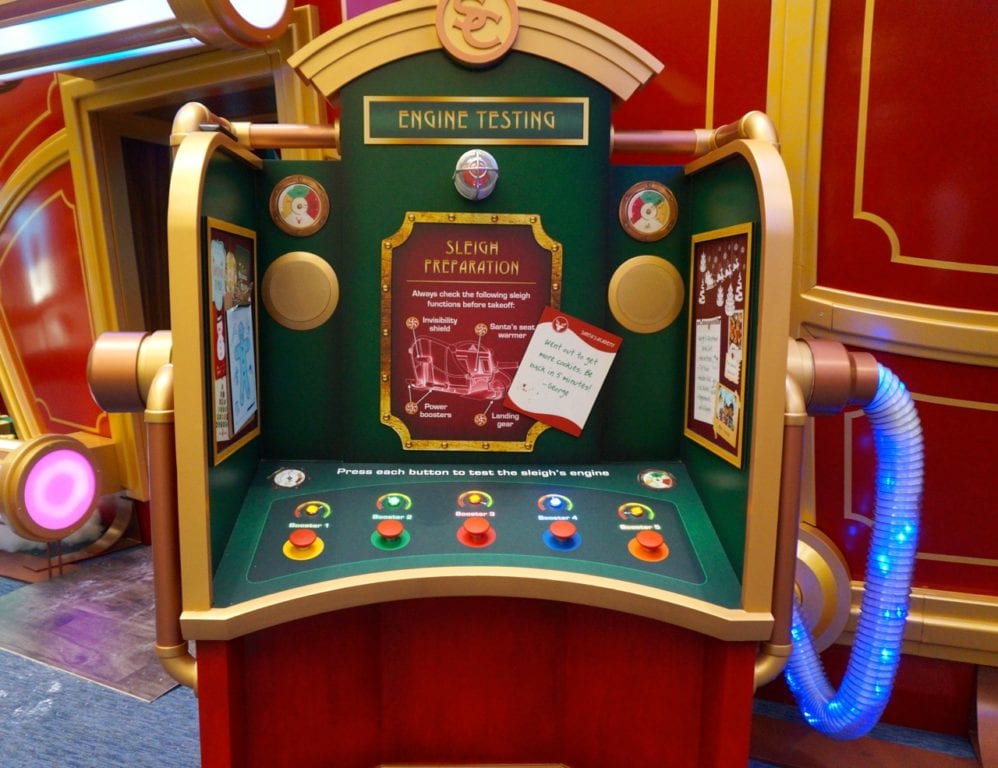 Children can test the engines and provide a boost to make sure Santa’s sleigh can fly in any weather. Photo credit: Ronni Newton 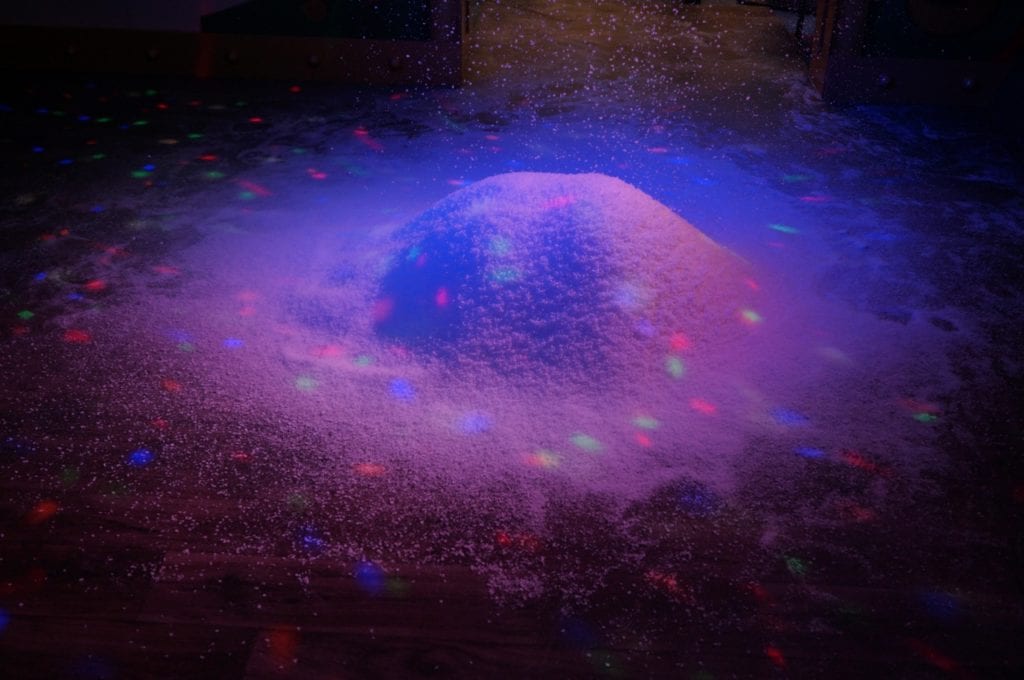 The ‘enchanted snow’ is non-toxic and melts in water and if a child eats it. The snow is changed on a regular basis. Photo credit: Ronni Newton 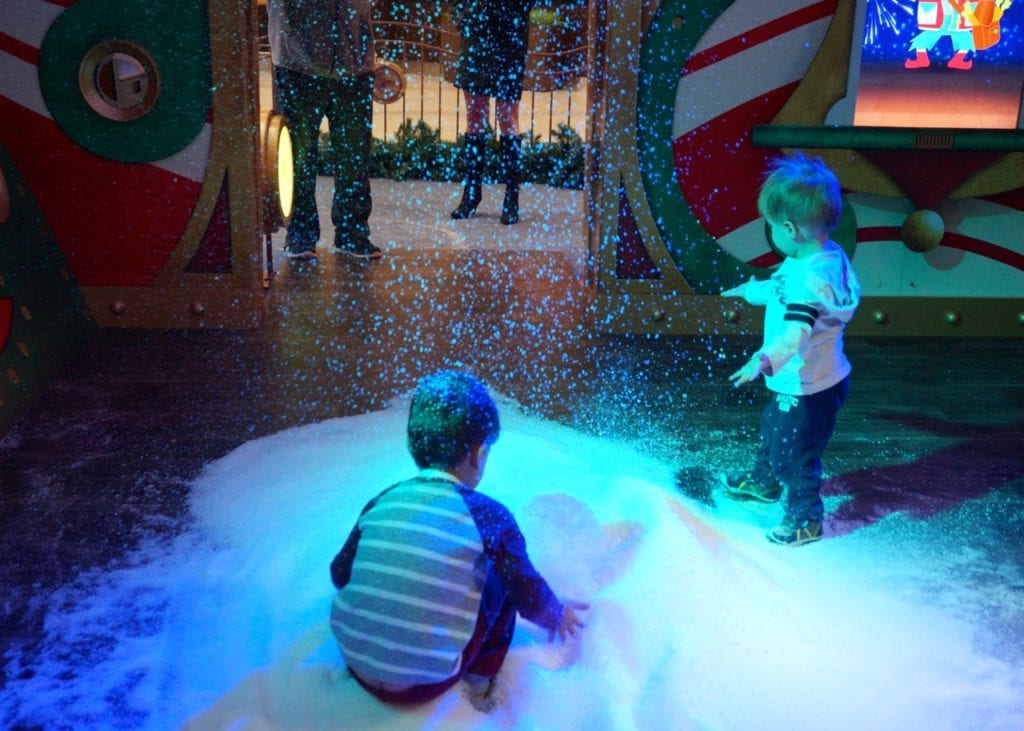 Oliver (4) and Archie (2) Esposito of Wethersfield test out the snow at Westfarms. Photo credit: Ronni Newton 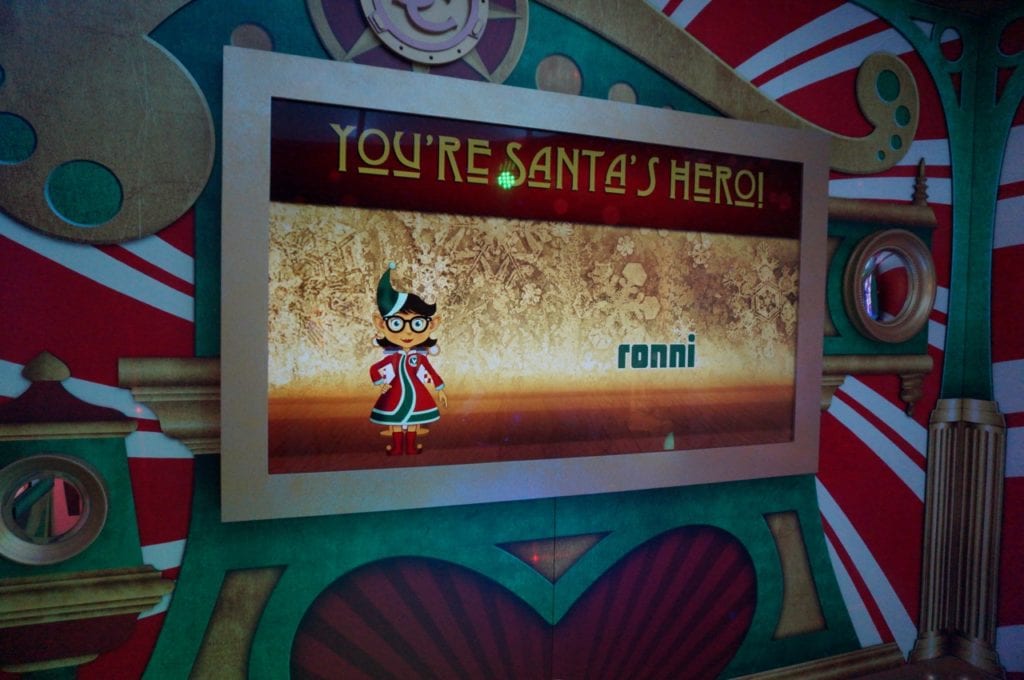 Each child (or the we-ha.com editor) gets his/her name displayed on the screen inside the sleigh while dancing in the enchanted snow. Photo credit: Ronni Newton

Santa is ready and waiting to meet children in the Santa’s Flight Academy experience at Westfarms. Photo credit: Ronni Newton