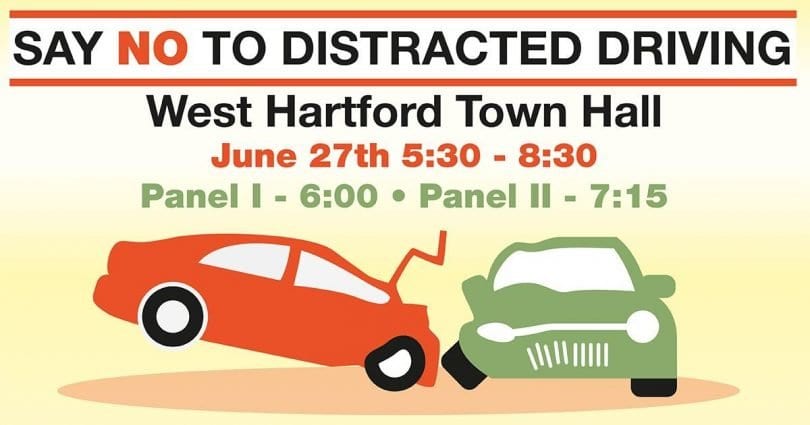 A Distracted Driving Awareness and Prevention Panel will be held on Wednesday, June 27, at West Hartford Town Hall. 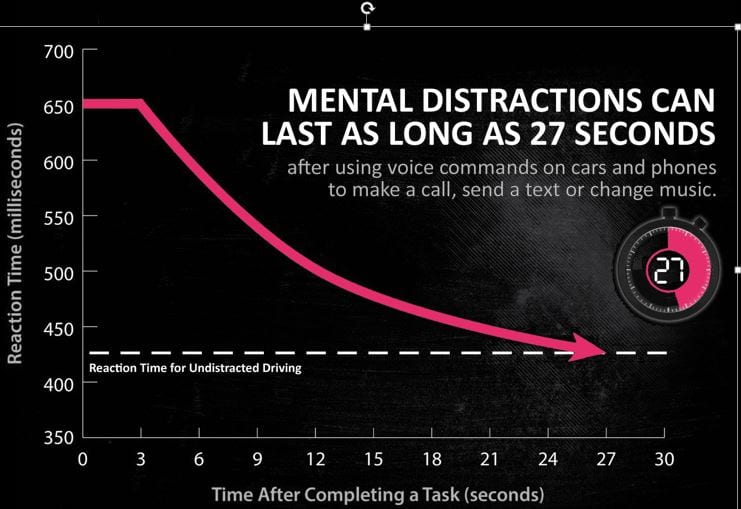 Event organizer Ryan Keating, a principal with Keating Agency Insurance, said that distracted driving is something that can be changed immediately.

“You may ask: Well, what exactly is distracted driving?,” Keating said. It’s defined by the National Highway Traffic Safety Administration as: “any activity that diverts attention from driving, including talking or texting on your phone, eating and drinking, talking to people in your vehicle, and more.”

Most alarming, he said, is the continued practice of texting and driving.

“Many people think that a text message is a ‘quick and easy’ response to someone else. Wrong!,” Keating said. “Sending a test message takes an average of 5 seconds. Going 55 miles per hour, that is the same as driving the entire length of a football field with your eyes shut.”

Keating knows firsthand what can happen when someone is not fully paying attention while driving.

“I remember nearly a decade ago I had a life-changing accident when I was tying a tie on my way to a job,” Keating said. He was driving down Sedgwick Road, and it was the first day of school, and comfortable that he could manage tying his tie at the same time because he had done it before.

“All of a sudden I saw brake lights and a Lexus SUV. I veered right to avoid a direct collision, but damaged the right side of [now former] Town Manager Ron Van Winkle’s car and totaled my car,” Keating recalled. “It opened my eyes to just how fast things happen, and I was extremely fortunate that there was not anyone walking to school in the path of my car when it went off the road.”

Keating said that one of his friends and hockey teammates was changing a CD in his car, and swerved over the center lane, crashed, and broke his femur. He was hospitalized, and missed a whole hockey season.

Technology today creates even bigger distractions, and Keating said that the panel is important to him personally, as well as to the community and families everywhere.

There are countless similar stories, and many have tragic endings. The documentary “3 Seconds Behind the Wheel,” is due to be released next week. It follows the behavior of eight drivers over a six-month period, and reveals some alarming behaviors. Click here for more information and to view a trailer.

Distracted drivers are unable to be defensive drivers, which is an essential element of driving. Distracted driving potentially impacts everyone – drivers, their passengers, and anyone else on the roads, said Keating.

His concern, and desire to continue to spread awareness of the danger of distracted driving and the need to create a change in behavior, led Keating to plan Wednesday’s forum.

There will also be exhibitors on site, including ATT which will bring their virtual reality It Can Wait Campaign distracted driving simulators.

Joel Feldman, an attorney in Philadelphia who devotes most of his professional time to distracted driving educational campaigns. The founder of End Distracted Driving, he works with schools, businesses, and community organizations across the country and has personally spoken with about 150,000 students and adults since 2011. He began working to reduce distracted driving after someone he loved very much was killed by a distracted driver. He is a recovering distracted driver.

Amy Watkins, the Pedestrian Safety Coordinator for Watch for me CT, part of the injury prevention center at Connecticut’s Children’s Medical Center. Watch for Me CT seeks to increase the overall visibility of pedestrian and cyclist safety issues through a statewide media awareness campaign and partnerships with communities and organizations throughout Connecticut that are committed to making the roads safer for road users of all types.

Peter Gulbrandsen, Vice President and National Auto Lead for Personal Insurance at Travelers. In this role, he is responsible for the development of national auto strategies, auto innovation, and third party data strategies. In the fall of last year, the Travelers Institute launched its Every Second Matters campaign to address the distracted driving problem. Through a series of forums held across the country, the campaign looks to bridge the gap between why many believe distracted driving is dangerous, yet nearly a quarter of Americans admit to doing it.

Keating and Attorney Peter Bowman will moderate the discussion.

“There are growing movements across the country to put an end to distracted driving,” Keating said, and he is hoping that Wednesday’s panel will be some part of creating behavior change.

The event is free and refreshments will be provided. 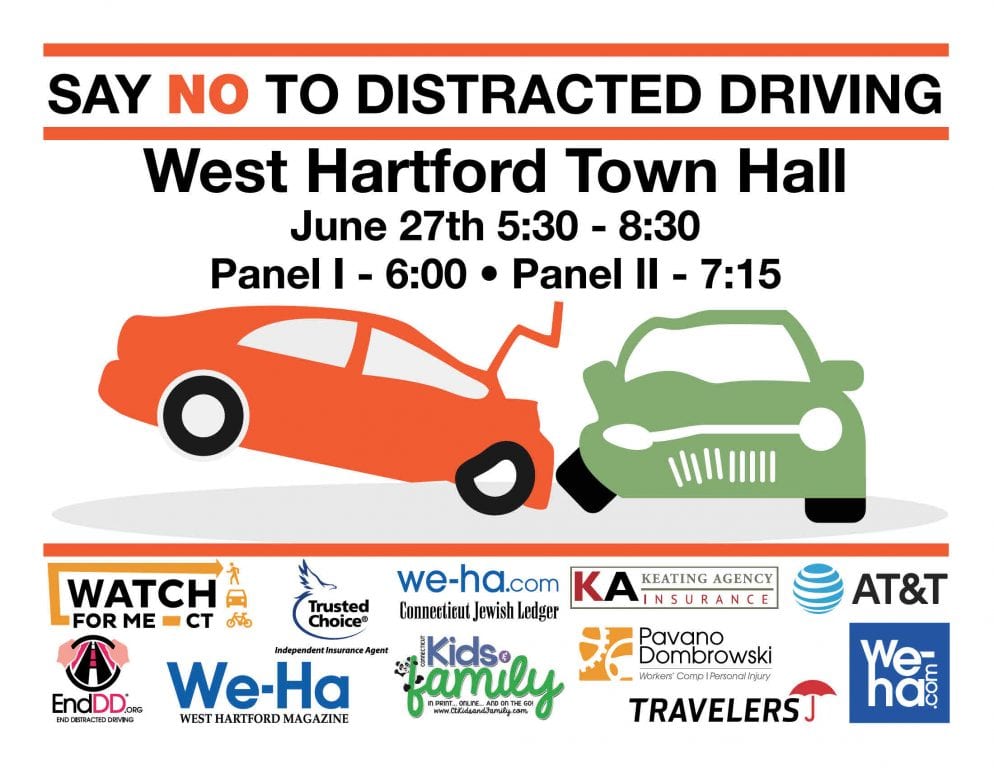