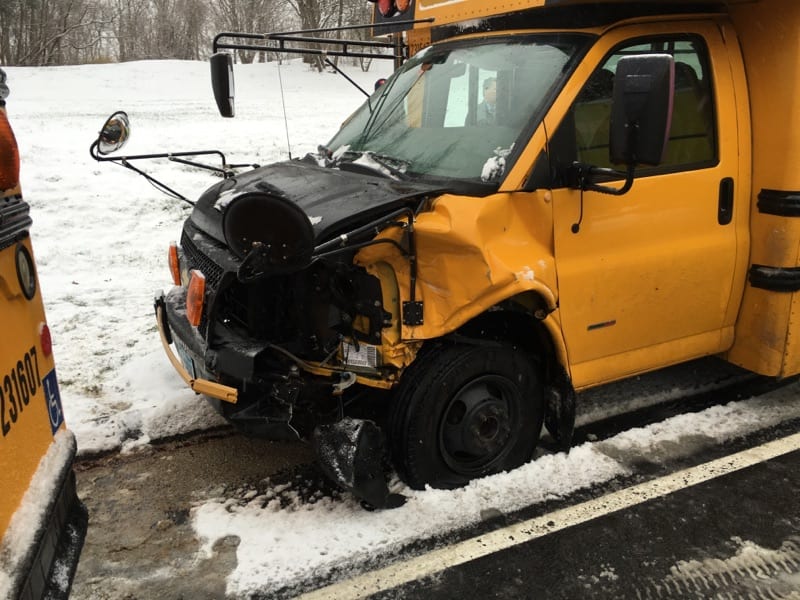 [Updated, 11:30 a.m.] Police report that students were on board a school bus that was hit by an SUV on North Main Street Monday morning.

A First Student bus was damaged after it was hit by a Ford Explorer Monday morning on North Main Street in West Hartford. Photo courtesy of West Hartford Police

All after school and evening activities of the West Hartford Public Schools were canceled on Monday.

Additional details and clarifications have been released about Monday morning’s accident involving an SUV and a First Student school bus in West Hartford.

According to police, five students and two adults were on the bus, which was headed to Norfeldt Elementary School when the driver of a 2003 Ford Explorer lost control and crossed the double yellow line, striking the bus at 8:25 a.m. Monday morning.

The bus was headed northbound and the car was headed southbound. The incident took place at the intersection of North Main Street and Sheep Hill Road.

Police said it was snowing at the time and the road surface was “very slippery.” 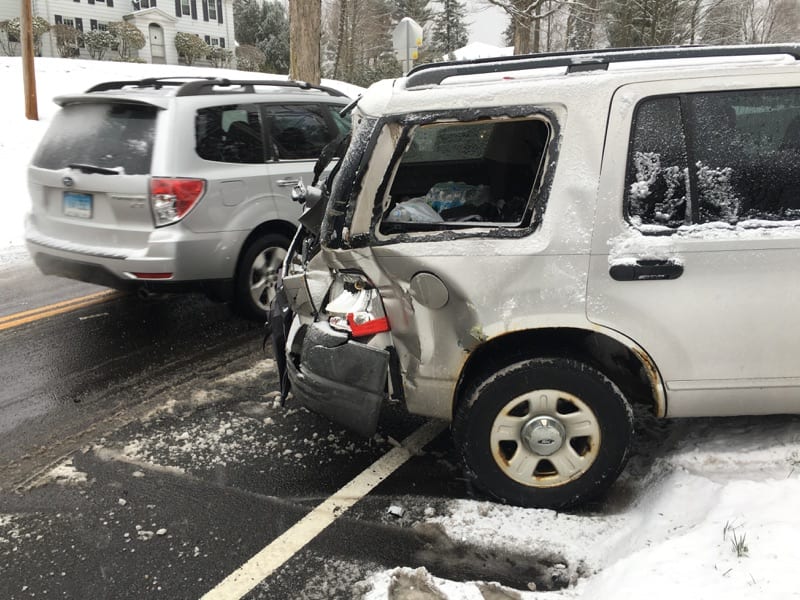 The driver of the bus, Jacqueline Harris-Cousins, 56, of Bloomfield, sustained minor injuries and was transported to Hartford Hospital for evaluation, police said.

One student on the bus, as well as an adult bus monitor, also received minor injuries. Neither was transported to the hospital, police said.

The driver of the vehicle, Verona Jones, 47, of Bloomfield, was given an infraction for traveling too fast for the conditions. Her vehicle sustained heavy front and rear damage and was towed from the scene.

The bus, which was owned by First Student, sustained heavy damage to the front left area and the left side, and was towed from the scene. The students were transported to school on a replacement bus.

Assistant Superintendent of Schools Andy Morrow said that unfortunately bus accidents occur, and that this one was not the fault of the bus driver. The district runs a large number of buses and Morrow said that this was the fifth or sixth accident to occur this year.

Morrow said that the decision not to delay opening or close schools for the weather was made after lengthy and careful discussion between the superintendent’s office, Plant Services, Public Works, and the West Hartford Police.

“[Superintendent] Tom Moore and I were in contact before 4 a.m. this morning,” Morrow said. When the decision had to be made there was limited snow – less than an inch – on the ground.

Morrow said he had received a handful of concerns. “We get that no matter what decision we make,” he said. The impact on parents who work is also considered when deciding whether or not to delay school opening.

“We do the absolute best we can,” Morrow said.

A decision on early dismissal had not yet been made, but this story will be updated if school dismissal changes.

The driver of an SUV lost control of the car and collided with a school bus Monday morning on North Main Street in West Hartford, police said.

According to Capt. Jeff Rose, the incident happened at 8:25 a.m. near the intersection of North Main Street and Sheep Hill Road. The car was headed northbound and the bus was headed southbound, he said.

There were six students on board the bus, which was en route to Norfeldt Elementary School.

Rose said that one child on the bus received minor injuries, but no further information was yet available. He confirmed that person was transported from the scene to Hartford Hospital, but no further details were available. It is standard procedure for students to be checked out at the hospital following a school bus accident unless a parent or guardian refuses treatment at the scene.

Check back for more details.