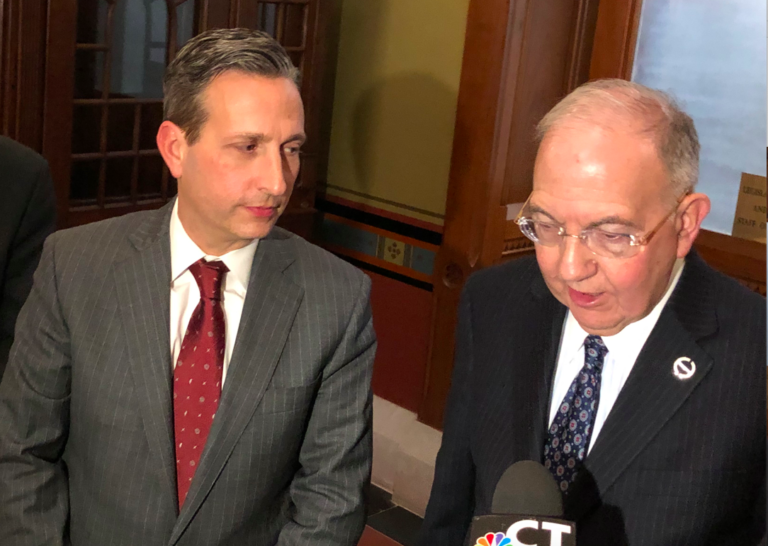 Senate President Pro Tem Martin M. Looney said a ‘contingent consensus’ of 18 Democrats have not rejected the concept of a bill that tolls large commercial trucks only.

The Democratic majorities of the state House and Senate cautiously edged toward consensus Tuesday on a 10-year, $19 billion transportation infrastructure plan that would charge tolls for tractor trailers on a dozen Connecticut highway bridges.

With few caveats, House Democratic leaders said they could pass a downsized plan that would raise about $170 million in net revenue annually, a drop from the earlier financial projections of $187 million for a broader plan that included medium-sized trucks.

But Senate President Pro Tem Martin M. Looney, D-New Haven, emerged from a long closed-door caucus with a significant list of questions and conditions that must be addressed before he can assure the 18 votes necessary for passage in the Senate.

“We have a contingent consensus of 18 members who have not rejected the concept of a bill to toll trucks on bridges only,” Looney said.

Democrats hold 22 of the 36 seats in the Senate. Eighteen votes would allow passage on a tie-breaking vote by the presiding officer, Lt. Gov. Susan Bysiewicz.

One of the conditions set by some Senate Democrats was language making clear to the voting public in 2020 that a vote for tractor truck tolls was not a first step toward a broader tolling plan, evidence of the success Republicans and other toll opponents had framing the debate.

“We know already the Republican strategy seems to be to ignore the bill that we’re actually trying to pass and just say that it’s the first step toward universal tolling, which they want to run on,” Looney said. “And obviously we want to blunt that.”

By exempting all but the largest commercial trucks, the legislators and Gov. Ned Lamont are willing to forgo revenue in favor of a political benefit: Countless local small businesses that use box trucks and smaller vehicles now would be unaffected by tolls, presumably taking away potential supporters of the no-tolls movement.

“It would have captured a lot of the small businesses in the state, such as the oil trucks that deliver oil to our homes, the Fed Exes, the UPSes, the small box trucks,” Sen. Carlo Leone, D-Stamford, said of the previous version. “We wanted to minimize even that impact on Connecticut businesses.”

The change allowed House Speaker Joe Aresimowicz, D-Berlin, to frame the choice now before the General Assembly as imposing tolls on tractor trailers vs. borrowing that would be paid by all Connecticut taxpayers.

“I don’t want us to continue to pick 18-wheelers over the state of Connecticut. That’s what we’re talking about here,” Aresimowicz said. “It’s a silly discussion. We just need to move forward.”

Talking to reporters before the Senate Democrats outlined their “contingent” consensus, Republican minority leaders already were scoffing at the idea that Democrats could end the day with the commitments necessary for passage, questioning the quality of information available to lawmakers in the House and Senate caucuses.

“There is no toll plan. Let’s be clear. I’m not really sure what today was really about,” said Senate Minority Leader Len Fasano, R-North Haven. “They don’t have a bill. They don’t have a plan. They’re saying it’s changing as we talk. The revenue is going down.”

House Democrats conceded that significant work remains, but said the parameters of the down-sized plan were clear to them, with a consensus in their caucus about toll rates, the classes of trucks to be tolled and the revenue that can be expected. 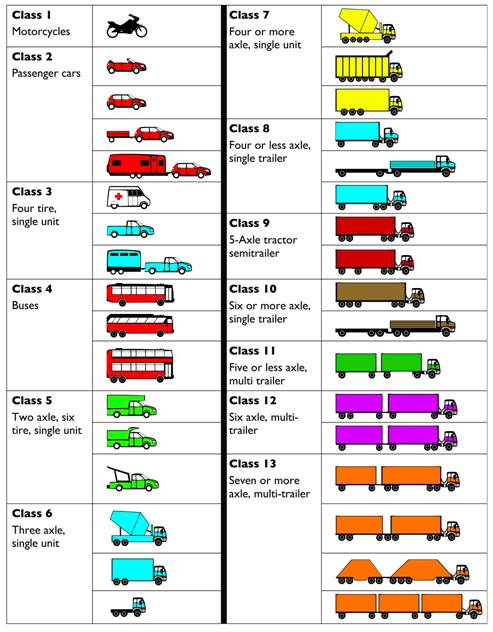 The Democrats’ plan would charge tolls only on tractor trailers trucks in Class 8 or higher. Federal Highway Administration image

“There are some questions left to be answered. There is the finality of the bill actually being written up and getting the bill in their hands, so they can read it,” Aresimowicz said of his caucus members. “But I still feel very comfortable that we can move forward.”

But the Senate Democrats said later a key issue to be resolved is the responsibilities of a Transportation Oversight Board that would be created in the bill. Originally, the board was seen as way to review the construction priorities set by the DOT.

Senate Majority Leader Bob Duff, D-Norwalk, Looney and Leone, the co-chair of the legislature’s Transportation Committee, would not rule out giving the board the authority to set toll rates – immediately inviting criticism from a no-tolls leader, Patrick Sasser.

“They want an oversight board that will control toll rates,” Sasser said in a Tweet. “No way will we ever allow these elected officials to pass the buck to some board.”

Looney said some Senate Democrats also want assurances that urban bus service would be improved and minority-owned businesses would share in the transportation spending. But he added that he still thinks approval is possible in a special session this month.

The governor issued an optimistic assessment of his prospects for addressing the Senate Democrats’ concerns and eventually passing the latest version of his plan, CT2030

“I want to thank the House and Senate Democratic caucuses for meeting today to discuss the future of Connecticut’s transportation system and consideration of our CT2030 proposal,” Lamont said. “These are decisions that prior elected officials put off for decades, and Connecticut can no longer afford to kick the can down the potholed road.

“Over the coming days, I look forward to continuing these discussions so we can adopt a plan to finally fix our transportation system and get our state’s economy moving again, in short order.”

The administration says half or more of the revenue would come from out-of-state trucks, according to modeling done by the state Department of Transportation.

When medium-sized trucks were included, the estimate was that 49% of the toll revenue would come from out of state vehicles. No updated modeling was available Tuesday, but officials said the percentage was likely to increase significantly with only tractor-trailers being charged.

Lamont has repeatedly scaled back his ambitions for a 10-year infrastructure spending plan, beginning with a comprehensive tolling plan in February that gained little support.

CT 2030, the version he proposed in November, called for $21 billion in spending to be financed by a mix of tolls on all motor vehicles and low-cost federal loans. A trucks-only plan was projected to raise enough money to finance about $19.4 billion in transportation borrowing over a decade.

The Lamont administration said Tuesday that removing medium trucks from the tolling scheme would require shrinking spending from $19.399 billion to $19.162 billion, assuming legislators would accept the toll rates the administration proposed last month.

The justification for higher tolls on heavier trucks is research that indicates damage to highways increases exponentially with the size of the vehicle, though the trucking industry disputes the findings.

Republicans are opposed to any form of tolls or new revenue, despite a growing backlog of infrastructure maintenance and the projected of insolvency of the Special Transportation Fund (STF) in about five years.

Financed by fuel taxes, fees and some motor vehicle taxes, the STF pays the debt service on borrowing for transportation projects and the operating costs of the Departments of Transportation and Motor Vehicles.

The financing of CT2030 relies on more than tolls. One element involves an increase in the sales tax receipts pledged to transportation.

Connecticut transfers $60 million in sales tax revenues from vehicle sales this fiscal year from the budget’s General Fund to the transportation program. That transfer, in turn, helps cover the debt service on hundreds of millions of dollars borrowed via bonding to invest in highway, bridge and rail upgrades.

The Democratic plan maintains a program already approved by the legislature to steadily increase that transfer, which would jump rapidly by 2022 to $272 million, and then grow more gradually until it reaches $424 million in 2030.

Republicans question whether the General Assembly would keep that commitment in the event of a budget shortfall.

Investing $19 billion in transportation construction by 2030 also hinges on Connecticut’s economy remaining rosy until late 2024. Economists say the state and the nation are closer to their next downturn than to another boom cycle.

The Democratic proposal also involves tapping surplus dollars after the rainy day fund reaches it legal limit of 15% of operating expenses in late 2021.