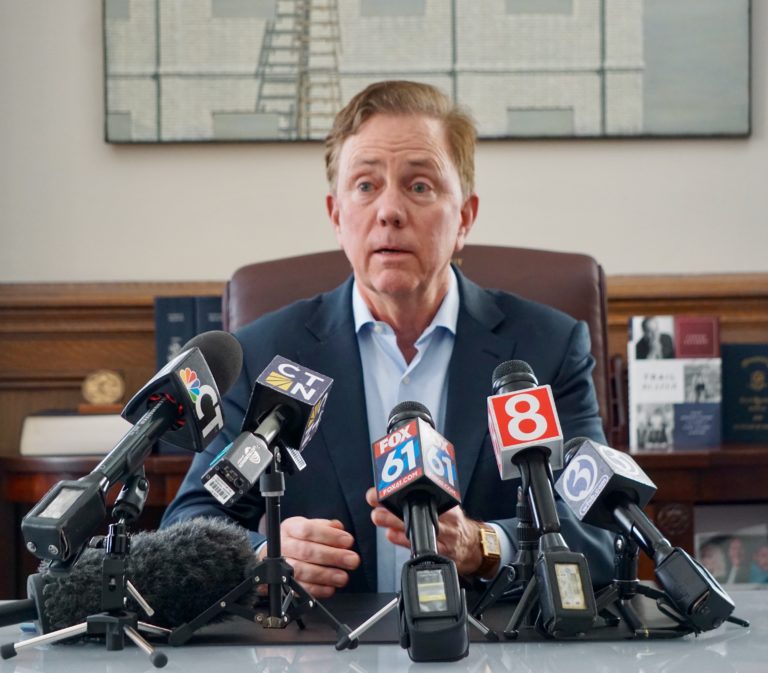 Gov. Ned Lamont said Wednesday after meeting with Democratic legislative leaders that tractor-trailer tolls are off the table, saying Senate Democrats could not deliver on a promised vote.

Gov. Ned Lamont effectively gave up Wednesday on Senate Democrats ever calling a promised vote on truck tolls, scolding fellow Democrats and telling reporters his administration was ready to explore alternative funding sources for transportation. But Senate Democratic leaders protested they would have been ready to vote next week, a claim Lamont did not find credible.

Senate President Pro Tem Martin M. Looney, D-New Haven, cancelled a vote that had been tentatively planned for Thursday, blaming a 30-hour filibuster threatened by Republicans as reason to once again pause and regroup. House Speaker Joe Aresimowicz, D-Berlin, distanced himself from the Senate Democrats.

“I have always believed a tolling plan that captures out-of-state vehicles was the right thing to do to help move our state forward and protect Connecticut taxpayers from paying the whole tab for our infrastructure needs,” Aresimowicz said. “We were poised to act in the House tomorrow, but we need our colleagues in the Senate as well and apparently their ability to also act was tenuous.”

Republicans said the Senate Democrat’s blaming a potential GOP filibuster for the cancellation was pretext; Democrats didn’t have the necessary votes for passage.

Lamont, a Democrat who took office a year ago, said it was hard to believe the Democratic majority ever would be ready to vote, despite claims by Looney and Aresimowicz that each could deliver a victory – if only the other chamber went first, or somehow could simultaneously take up sections of a plan to charge tractor trailers tolls on a dozen highway bridges.

“‘We’re going to vote on Thursday.’ Everybody said that to me not less than five days ago,” Lamont said. “Here it is, Thursday is tomorrow, and they said, ‘Not yet, maybe next week.’ I’ve heard that in this building for the last year, and I think you’ve all heard it for 30 years. This is a place that specializes in kicking the can down the road, and I don’t accept it.”

Lamont said he was unsure how the setback on his first-year priority would affect his relationship with Democratic legislative leaders.

“We’ll see,” he said. “Look, I’m a little disappointed. I think you are elected to make choices. And if we make good choices, we really get this state going again. You’re not elected to say, ‘I can’t make up my mind’ or ‘I don’t want to vote this week, I want to vote next week’ and just push it off – something we’ve done in this building for a generation.”

The Republican minority leaders, Sen. Len Fasano of North Haven and Rep. Themis Klarides of Derby, whose caucuses were uniformly opposed to any form of tolls or new transportation revenue, said the issue of tolls was almost certainly dead for the rest of a three-month session that ends May 6.

Fasano said legislators were ready to tackle other issues and set aside a fight that had “sucked the oxygen” out of the Capitol. Klarides said she hoped the governor learned a lesson about trying to keep pushing an issue that clearly had run aground.

Neither Republican was willing to say the governor had suffered a fatal blow, undermining his ability to govern.

“We all know that your enemy today is your friend tomorrow in this building, so I wouldn’t read too much into this,” Fasano said.

Legislative Democrats, however, can expect blowback from their allies in organized labor.

Dave Roche, the president of the Connecticut Building Trades, said the Democratic majority was outmaneuvered by Republicans and had failed construction workers. He said Fasano was correct when he repeatedly said that Senate Democrats did not have the votes for passage.

“To be honest, I think the Republicans did a good job of fending off at least the Senate Democrats,” Roche said. “Len was right. If you have the votes, run it. If they weren’t going to run it, why not get in a room and work something out?”

Nate Brown, the political director of the Operating Engineers and vice president of the building trades, had been quietly skeptical for weeks that the plan ever would come to a vote. But he said Wednesday’s announcement still was hard to take.

“It’s disappointing that the legislature will not take a vote on the governor’s transportation plan – the only plan that responsibly takes advantage of federal loans, toll revenue from heavy out-of-state trucks and results in 23,000 jobs over the next decade,” Brown said. “The governor said it best: This proposal would create a recession-proof jobs program for thousands of workers in our state, allowing middle class families to flourish during a possible economic slowdown.”

Don Shubert, president of the Connecticut Construction Industry Association and an advocate for tolls, said he could appreciate the governor’s frustration with legislators.

Lamont said his administration would now turn to other funding sources to address a backlog of transportation maintenance and improvements, including  leaning more heavily on general obligation bonding, a step that could deprive funding for other capital projects. Whatever the administration pursues, the governor will need the Democratic majority.

House Democratic leaders deferred to the governor Wednesday, withholding comment until after he addressed reporters.

But Senate Democratic leaders rushed to release a statement before Lamont spoke, insisting they still could deliver on a transportation financing plan relying on truck tolls – if only Lamont and the House Democratic majority could give them another five days. The statement seemed intended to avoid blame for a major policy and political setback for a Democratic governor.

“We are still confident that Senate Democrats have the votes to pass a comprehensive transportation plan which includes 12 toll gantries on 18-wheeler trucks only. We are prepared to hold a session next week to vote on a bill to make the necessary transportation investments for Connecticut’s economic development, residents, and businesses,” said Looney and Senate Majority Leader Bob Duff in a joint statement.

One of the gantries is planned for the I-84 bridge that crosses Berkshire Road in West Hartford.

A ‘pause’ on the vote

Kevin Coughlin, a spokesman for the Senate Democratic leaders, later clarified that the Senate had no plans for a vote next week.

“The governor put a pause on it, so there is no vote,” Coughlin said.

Aresimowicz, the House speaker, said the Senate had struggled to find the votes, noting Looney’s awkward statement after a Democratic caucus a month ago about a “contingent consensus” for truck tolls. Aresimowicz acknowledged he never was confident in the Senate leaders’ assurances that they could win final passage if the House took up the bill first.

“It would be irresponsible for me, given everything that’s happened in the last month, to vote for a bill and put it on the Senate floor, to have no guarantee it would pass if we sent it to them,” Aresimowicz said.

Connecticut currently directs fuel taxes and various other revenues into a Special Transportation Fund to pay debt service on transportation projects, as well as the operating expenses of the Department of Transportation and Department of Motor Vehicles. But the fund is projected to become insolvent in the next five years, and the state has a significant backlog of infrastructure maintenance.

But that $1.55 billion falls far short of the $1.9 billion-to-$2 billion that DOT Commissioner Joseph Giulietti says the capital program needs each year, to maintain a state of good repair and to begin to make strategic improvements that the Lamont administration says are necessary for economic growth.

The administration has said it would need to redirect about $200 million of general obligation bonding to complement the $1.55 billion already earmarked for transportation.But even with those funds, a $1.75 billion annual investment in transportation work would fall short of the $2 billion annual target DOT officials have set.