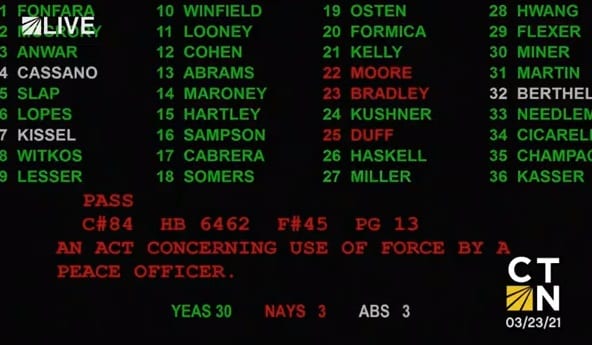 Screen grab of the Senate’s vote on HB 6462 (Courtesy of CTN/CTNewsJunkie.com)

Revised use of force standards will now take effect as of Jan. 1, 2022.

Over the objections of three Democrats, the Senate voted Tuesday to delay until next January elements of a police accountability law pertaining to the standards for use of force.

The Senate’s 30 to 3 vote sends the bill to Gov. Ned Lamont’s desk for consideration. The House passed the change unanimously a week ago.

The bill modifies a law that would have required police to be trained in updated use of force standards by the end of the month. It delays the deadline until Jan. 1, 2022. The bill also changes the language of the law so it now requires officers to consider and weigh reasonable alternatives to force rather than “exhausting” those alternatives before using it.

Sen. Dan Champagne, a Vernon Republican and retired police officer, called the bill an improvement to the law it modified.

“This is a lot better than last year. Is it perfect? No. But at least it gives officers a chance to continue to do their jobs and be able to defend themselves and defend others,” he said.

During the debate, Bradley spoke against the measure. The law modified by the bill was passed last summer in response to outrage sparked by the death of George Floyd and other Black men around the country. Bradley said it was a “monumental piece of legislation” and he would not support delaying its provisions.

“I cannot see it, piece by piece, be torn apart. What we’re asking for is everybody who wears a badge is to uphold that badge and to serve every single person,” he said.

Sen. Gary Winfield, a New Haven Democrat who is co-chairman of the Judiciary Committee, voted for the bill, but said he agreed with Bradley’s concerns. However, Winfield said the existing law risked legal challenges if police believed they had not been given adequate time to learn the new requirements.

“If it is written in the law and it cannot stand up in the court of law because they haven’t been trained then people will be believing they have protections that they don’t have,” he said. “There are times we have to do things that, I think, intuitively we probably would not do, but that are ultimately the thing that we should do.”