Constituents came from all over the state to listen to and ask questions of U.S. Sen. Chris Murphy at a town hall meeting held Tuesday evening in West Hartford. 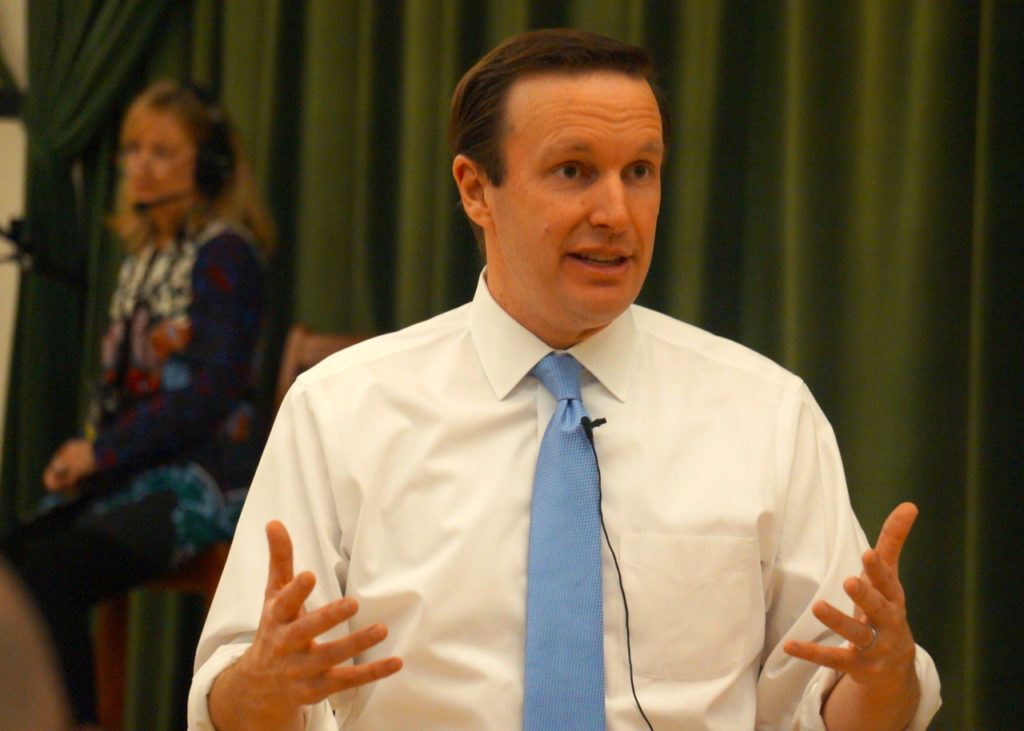 Constituents came well-prepared to ask U.S. Sen. Chris Murphy some tough questions at a town hall meeting in West Hartford on Tuesday night, and their questions – and his answers – were met with mostly cheers and applause from the predominantly supportive crowd.

The crowd was not just from West Hartford or nearby towns. Young and old, male and female, they came from all over the state – from Milford and Hebron, New Fairfield and Mystic – and began arriving just after 4 p.m. for the town hall meeting scheduled for 7:30 p.m.

West Hartford Town Hall auditorium was filled to capacity at least 30 minutes before Murphy took the podium, with an estimated 600 seated on the main level and in the balcony. Several hundred more waited in the hallways or watched from overflow rooms. An estimated 1,000 more never even made it inside the building before the fire marshal determined it was at capacity.

On his way into the auditorium, Murphy stopped and chatted with those who couldn’t get in.

He shook hands, and took selfies with constituents before and after the meeting – and even in the middle of the meeting with a Trinity College student who asked for a photo along with his question.

Murphy, who shed his suit jacket and became more energetic as the evening went on, responded to questions from dozens of constituents that ran the gamut from global warming, to immigration, to mental heath, to Russia, to education, to Pres. Donald Trump’s tax returns, to abortion, to the nomination of Neil Gorsuch, to freedom of the press.

“There is no fear, there is no anxiety, there is no sadness about what you feel about the country that cannot be cured by political action,” Murphy told the crowd. Nothing is impossible, and it’s important for citizens to care about what’s at stake. “Don’t assume what we have is inevitable … don’t assume that democracy is natural,” he said.

Murphy called Trump’s policies reckless and a danger to our way of life– “real threats to democratic norms.”

“It lifts me up to see the response,” Murphy said of the reaction across the country, the outpouring of social activity.

“I’m watching this play out with optimism. I am in this with every ounce of my being,” said Murphy.

“Plow a lot of your work into local advocacy,” he told a constituent from Avon who asked how best the community can support Murphy’s work.

Murphy said that while it’s difficult for Republicans to stand up to a president from their own party right away, he’s optimistic that some are showing signs of doing just that.

“There are Republicans – believe it or not – who don’t believe climate change is a hoax,” he said in response to one question. It’s important to get corporate America involved as well, pressuring companies to become more green, he added.

Murphy took some questions from people who were watching from the overflow rooms, including West Hartford resident Megan Striff-Cave: “I’m 15. is there anyway I can use my age to my advantage to be politically active in my community?” she asked. After joking that she probably has the energy to knock on three times as many doors, Murphy, who was at one time the youngest member of the general assembly and the youngest member of the U.S. Senate, said, “There’s a moral force that comes from speaking when you’re young.” Youth have a lot more power than adults tell them they have, he said.

Regarding a question about what can be done to save the Affordable Health Care Act, Murphy said that promises were made about replacing it with a better plan and the Congressional Budget Office will be able to determine if what is being proposed is actually better. “They were the dog that never thought they would catch the car but they caught the car and they’re being held accountable for the things they said … Remind them of their promises … My hope is that they will come to the table with us,” Murphy said.

“I am going to devote everything I have to stop this order from ever going into effect,” Murphy said to a question from a first generation American about the immigration ban. “This is making this country less safe on an hourly basis.”

He told Kristin Wiley of New Haven-based Action Together Connecticut, “My position on Judge Gorsuch is clear. If he’s going to bring his politics to the bench he’s not going to get my support.”

Connecticut’s other senator, Sen. Richard Blumenthal, is leading the force in the Senate to get the president to release his tax returns, Murphy said. He said he personally fears there is “clearly something deeply disturbing in those tax returns,” intimating that there might be something related to Russia that Trump wants hidden.

One man stood in line to ask a question holding a “Murphy for President” sign. He told Murphy that he feels the country is one step away from tyranny and wants Murphy to come up with something better that can be done in opposition. Murphy said that Trump is largely doing what he said he would do, and that’s a reminder about the need to win elections.

“What a gift this job is,” Murphy said of his role as a U.S. Senator.

“I am one generation removed from poverty and I get to spend my time in the United States freaking Senate,” Murphy said. And shame on me if I don’t use this position in order to speak up for people who have … no political actions.”

“I stay awake at night worrying that this movement will dissipate. And yet I’m fortunate to remember that there’s nothing you feel today that cannot be cured by your continued political action,” Murphy told the crowd in closing. “It is an absolute honor to represent you in the United States Senate.”

The entire town hall meeting was streamed live as well as recorded by West Hartford Community Television. Click here to view the meeting on YouTube. 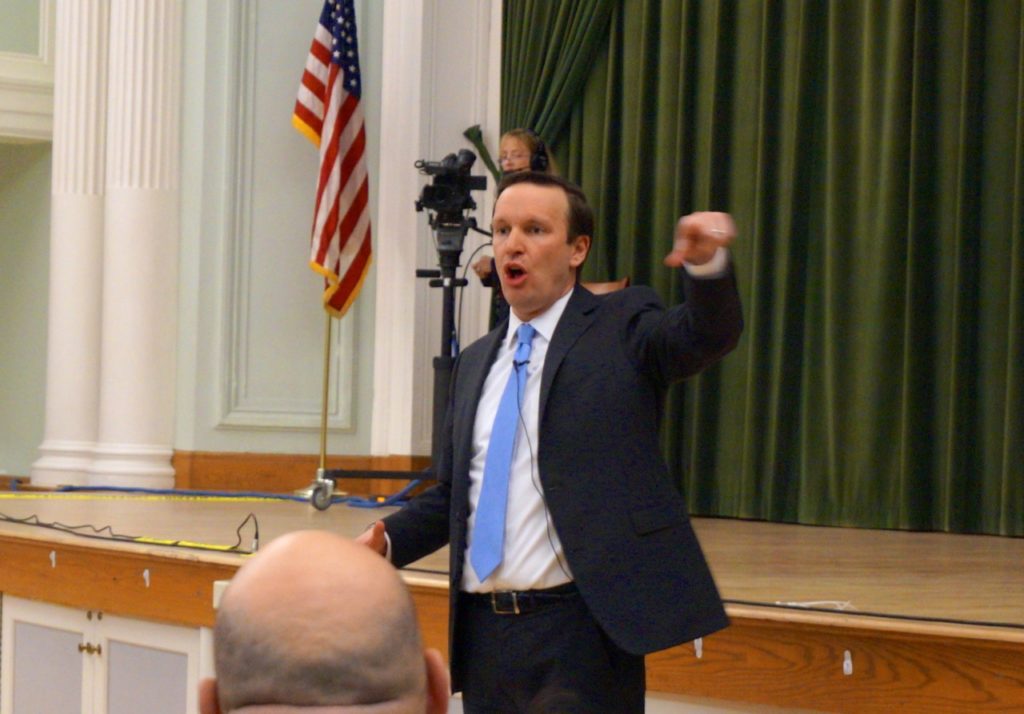 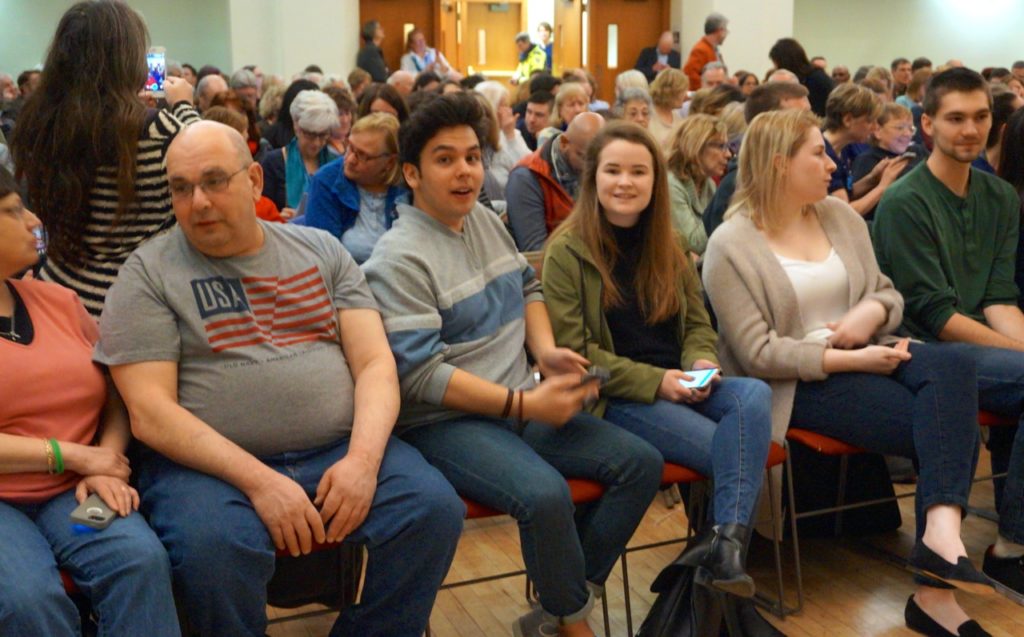 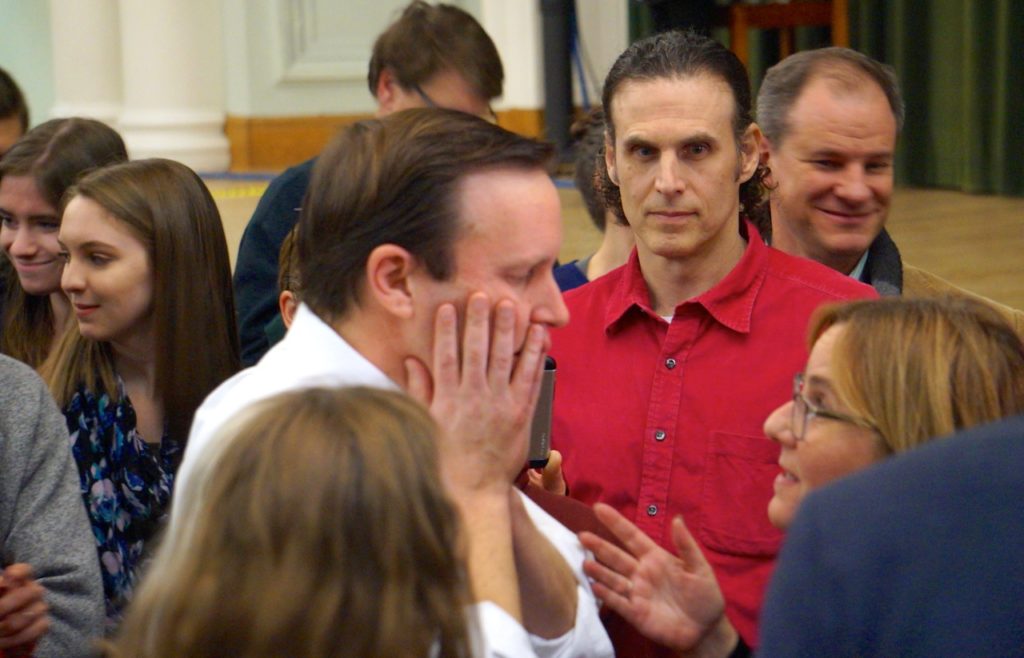 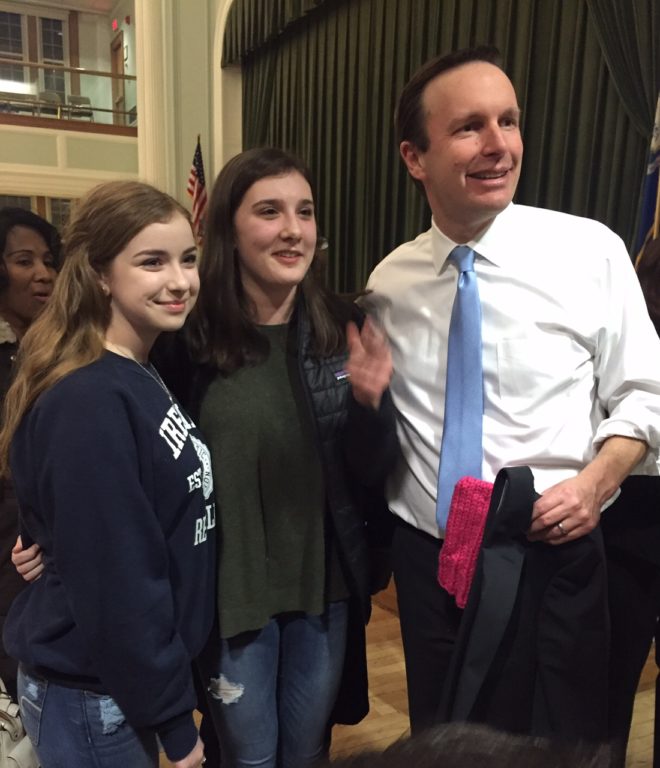 Megan Striff-Cave (center) of West Hartford poses with U.S. Sen. Chris Murphy after the town hall meeting. She wasn’t able to get inside for the meeting, but Murphy read and answered her question about becoming politically active as a youth. Photo credit: Ronni Newton 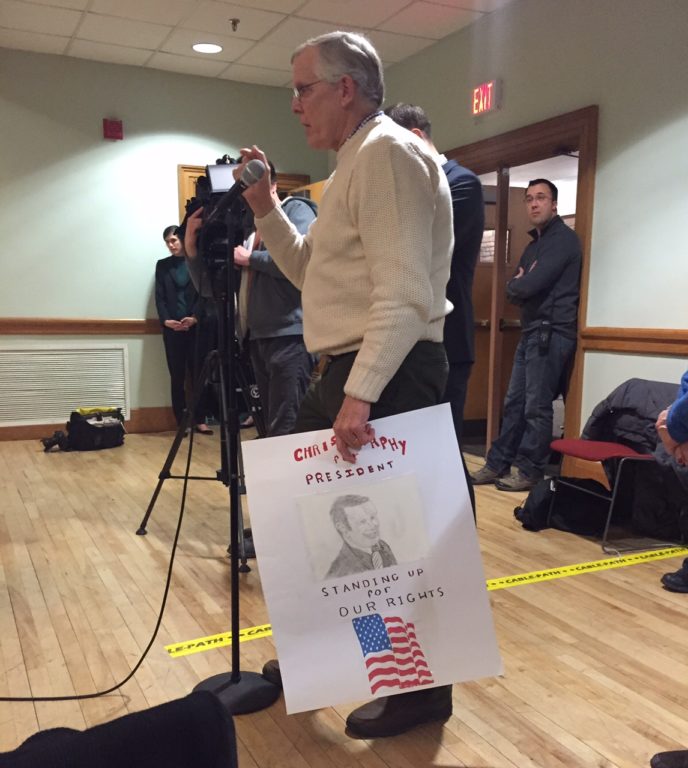 One man came with a “Murphy for President” sign. Photo credit: Ronni Newton 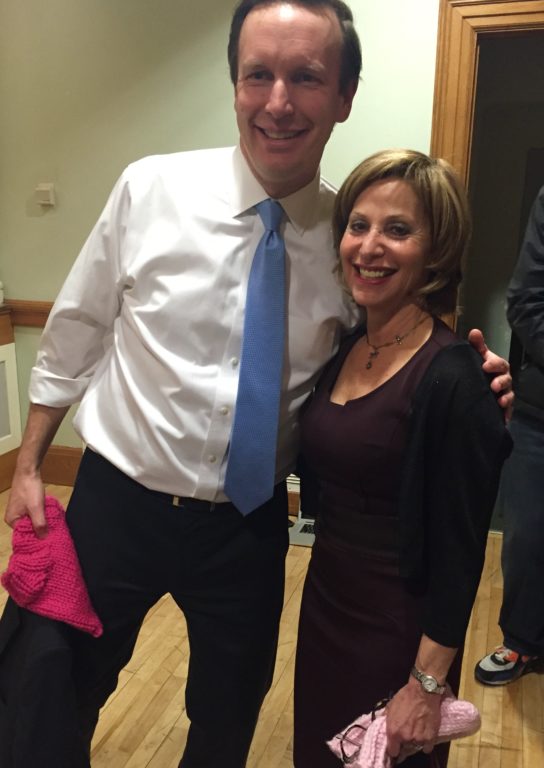 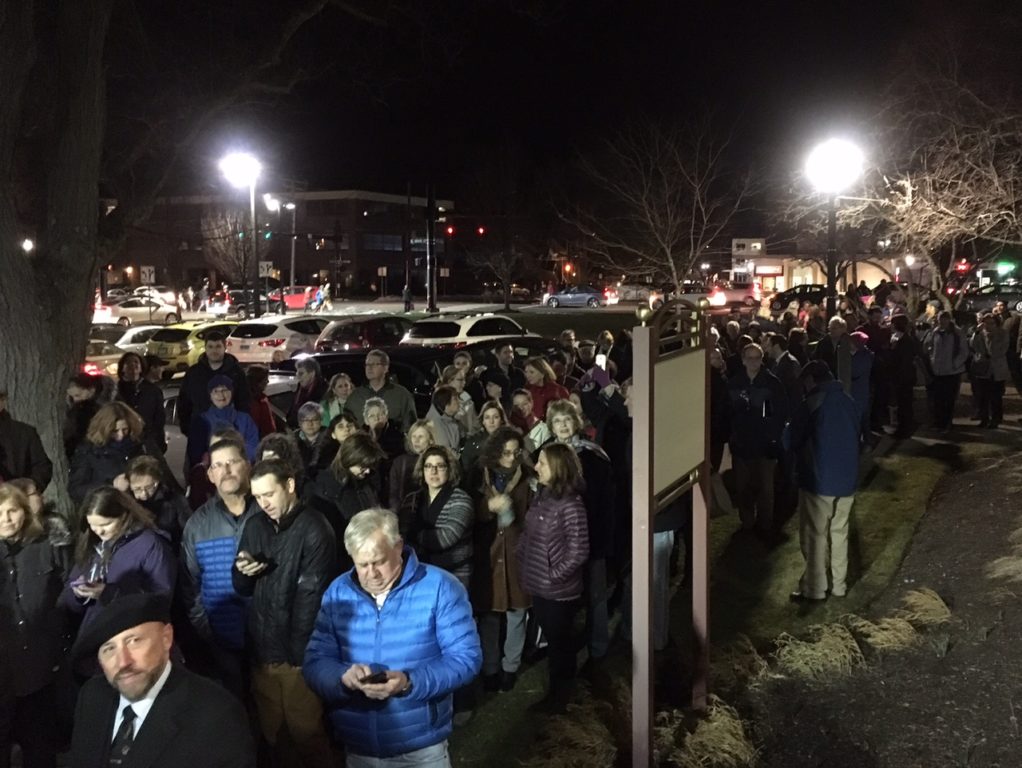 A crowd, estimated by Murphy at 1,000, outside West Hartford Town Hall was unable to get inside to hear the senator speak. Photo credit: Ted Newton