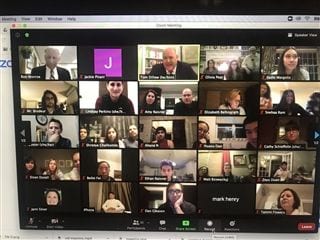 Six of the students inducted are West Hartford residents. 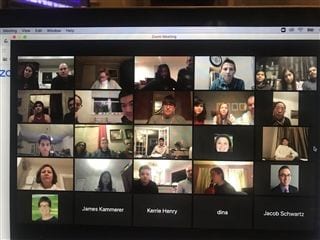 In the final game of his career, Williams hit a home run in his last at-bat. Updike viewed Williams’ unremitting dedication to the game as the tissue-thin difference between “doing the thing done well and the thing done ill.” Just like Williams, Monroe said these honor students pursued their academics with a steady and deep commitment and took personal pride in their work every step of their journey.

Matthew Bzowyckyj, son of Lisa and Daniel of Tolland

Shreeya Chalikonda, daughter of Aruna and Srinivasa of South Windsor

Brandon DeLucia, son of Deborah and Orlando DeLucia of Simsbury

Caroline Nguyen ’96 was the keynote speaker for the ceremony.  Currently, she is the acting deputy vice president for Europe, Asia Pacific, and Latin America for the Millennial Challenge Corporation, a government agency that provides time-limited grants for promoting economic growth, reducing poverty, and strengthening institutions. She oversees the agency’s two billion dollar portfolio of compact investments for that geographic region. In addition, she supervises MCC’s relationships with partner countries and provides oversight and guidance to teams for the development and implementation of sustainable programs focused on capital investments and policy reforms to ensure the achievement of program objectives. Prior to this position, she worked at McKinsey in South East Asia, was a counselor to the assistant attorney general in the office of legal policy in the US Department of Justice where she advised on and negotiating policy on national security and criminal law matters. Earlier in her career, she practiced law in Washington, D.C. Nguyen has a B.A. from Harvard College, an M.A. from The Princeton School of Public and International Affairs Public Affairs at Princeton University, and a J.D. from Columbia Law School.

Nguyen shared three life lessons with the hope that some of her experiences could prove useful and resonate with the inductees. Like them, Nguyen sat in their spot 25 years earlier with the sure thought that she would be a medical doctor, be married by 30, and have a career in Connecticut.

After taking more and more classes in the social sciences, running public service organizations, she rethought her path. “All this expanded my worldview. In each activity, I grappled with challenging issues of the day and defended my position. I learned how to unpack complex issues and how to communicate them. In college, the social sciences gave me a daily opportunity to argue ideas and think about and defend theories. That was where the fun was,” she said. She credits KO as the place that gave her confidence in a smaller, safer, more forgiving space so that she could find her voice. She advocated that the students do as much as they can today so they can do better tomorrow. “Your path and exposures lay the foundation for future success. You can draw from these experiences – take advantage of clubs, sports even though you may not see an immediate advantage,” she said.

Nguyen remarked that unfortunately in very competitive environments, individuals are not always team players nor do they always uphold core values of integrity and honesty. She advised the Wyverns not to give in to base temptations in their careers. She followed the KO motto of “Vincit Qui Se Vincit” “One Conquers for Conquering Oneself” to hold herself to high standards. “It’s about self-discipline. To do what is hard. These are fundamental pillars in life. This is what will set you apart and draw good people to you,” she said.

Lastly, Nguyen advised the students to enjoy their journey because there is no perfect job and trade-offs are inevitable. In Nguyen’s case, she thought working for the Department of Justice would have been her dream job. But, she learned that she favors positions and opportunities where she can make an impact and a difference. Due to the Justice Department’s far-reaching scope and the sheer number of players, Nguyen felt her impact was not as significant as she would have liked. “If you focus on only one concrete end goal, you may not consider other possibilities or opportunities that come your way because they don’t fit neatly in the box. Instead of just the job, figure out your values and priorities. The road ahead is winding and long. Take full advantage to grow and be a good person,” she said.