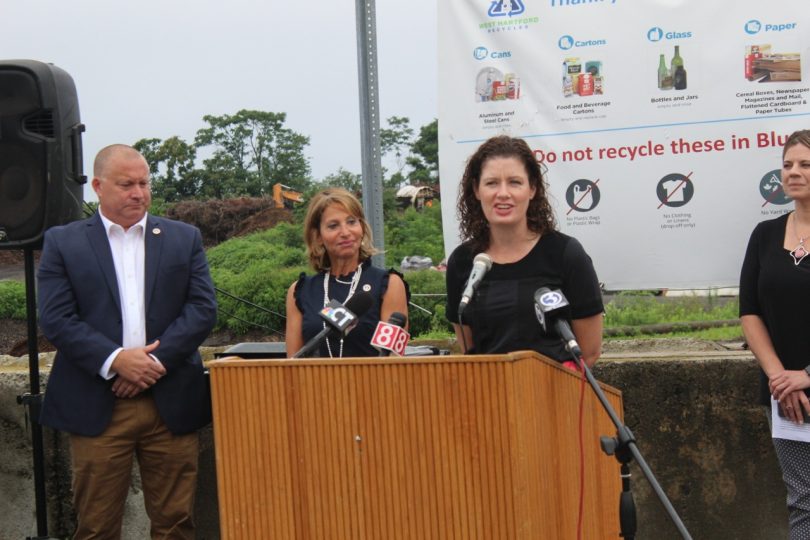 Department of Energy and Environmental Protection Commissioner Katie Dykes had a confession to make at a press conference at the West Hartford Yard Waste and Recycling Center on July 14.

“I am a recovering ‘wishcycler,’” she said, referring to the practice of adding items to a recycling bin without knowing if they’re actually recyclable. She cited plastic plant trays, Styrofoam and plastic bags as things she has been uncertain as to whether they go in the recycling bin.

But, as she and others noted at the press conference, there is now an app for that.

The RecycleCT Foundation released an app to its highly successful RecycleCT Wizard search tool to provide to increase ease and access for residents who are unsure of what goes in and what goes out of the recycling bin.

DEEP’s Sherill Baldwin demonstrated how the app, which is available on the Google and Apple app stores, works. 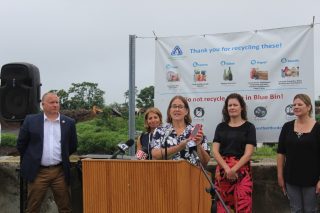 After the app is downloaded and opened, a search box appears for people to add a term – say “pizza box” – and determine whether that can be put in the recycle bin (note: pizza boxes can be put in the bins without the paper or cardboard liners, regardless of how greasy they get). Another bugaboo, according to Baldwin, are plastic bags, whose use were recently banned from state stores.

Typing in the term reveals that plastic bags are not supposed to go into the bins, but can be brought back to participating retailers that do recycle them.

The app also provides the top four most recent searches in the last month to assist users as well.

Styrofoam, for the record, also does not belong in the recycle bin, Baldwin said.

The idea is to expand the use of the RecycleCT Wizard search tool available available at RecycleCT.com.

Since 2017, there have been 715,000 searches performed on the site. Baldwin says she expects searches to double with the creation of the app, which is available in English and Spanish and is expected to be expanded to Portuguese and Chinese as well.

What’s at stake is both environmental and economic, according to Dykes and West Hartford Mayor Shari Cantor.

“We are facing a waste disposal crisis in the state of Connecticut,” Dykes said. “As we know, with the expected closure of the MIRA waste-to-energy facility in Hartford, it’s really going to impact the cost of disposal of municipal waste.”

At least temporarily, that expected closure is going to cause the state to have to rely on out-of-state landfills for the disposal of its waste, Dykes said.

“There is something we all can do to tackle this crisis,” she said. “We know 40% of what we throw away every year are materials that could be recycled.”

But, Dykes said, people need to be mindful of getting those items out of the disposal stream and giving them another life.

Another issue is not just putting proper items in the recycling bin, but keeping other items out, Cantor said.

The average contamination rate of recyclables (items that are placed in a recycling bin that aren’t actually recyclable) is about 25%, according to the Environmental Protection Agency.

“If you put the wrong things in the recycle bin, that spoils all the recyclables you’ve thrown away in that recycling stream,” Dykes said. “The most important thing you can do with that good intention, with wanting to help … and be sustainable is to get educated on what goes in and what stays out.”

Cantor added that contamination also drives up municipalities’ cost of disposing of waste. 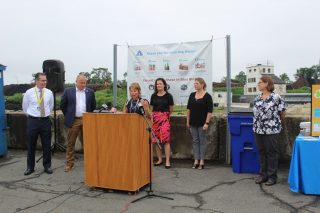 “West Hartford is a town that wants to protect our earth and be smart about what we spend on our trash disposal,” she said. “Educating people on how to manage their waste is a welcome addition.”

The app, which is free, is a perfect way to provide that education, while also making it fun, officials said.

“We want to make sure tools are really accessible,” Dykes said. “You can quiz your family members, quiz your kids and see how good you are on what goes in and what goes out.”