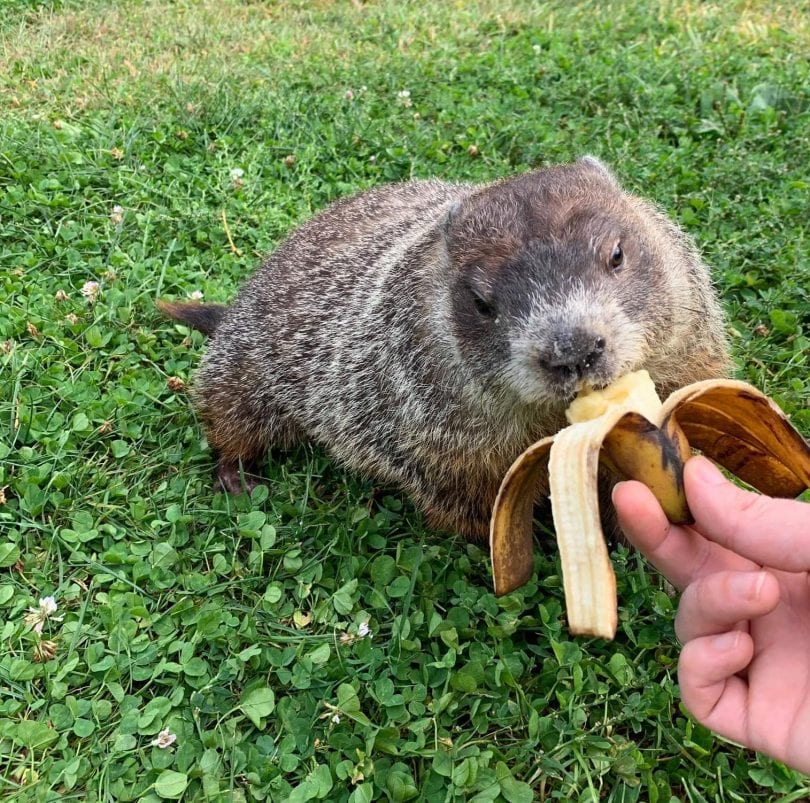 Thanks to donations from the community, the animals at the Children's Museum in West Hartford have plenty to eat. Facebook photo

‘Silver Lining’ will highlight the positive stories in the West Hartford community as residents, businesses, and organizations deal with the COVID-19 pandemic. 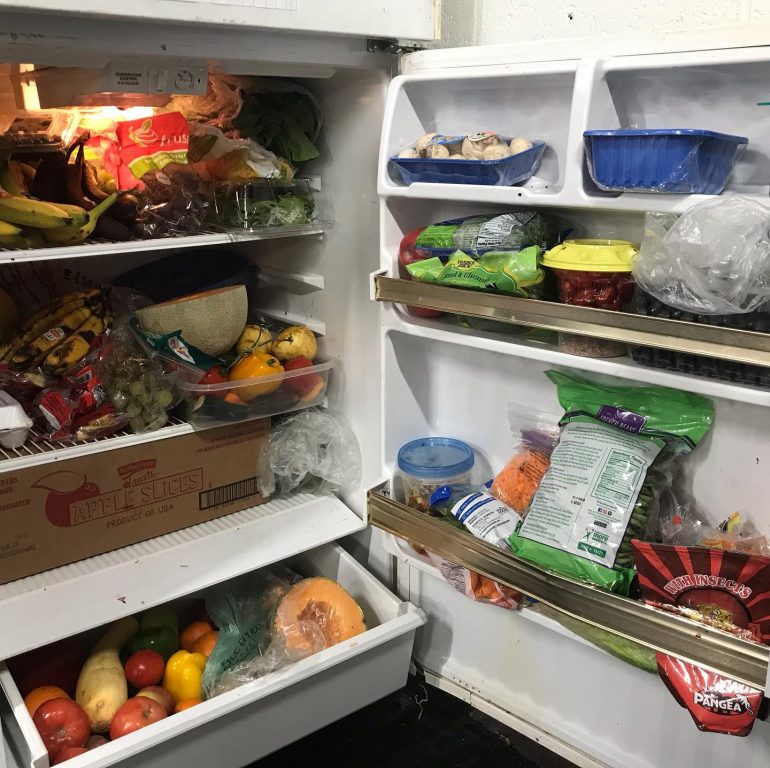 The refrigerator at the Children’s Museum in West Hartford is full of donations of food scraps made by the community. Facebook photo

The economics of the COVID-19 pandemic were evident immediately, as events were canceled and non-essential businesses closed their doors to stop the spread of the coronavirus, to flatten the curve to prevent the healthcare system from being overwhelmed.

Many West Hartford residents have jumped into action, sewing facemasks for healthcare workers and others who need personal protective equipment, donating food and supplies of gloves and hand sanitizers, and finding ways large and small in which they can help others in the community.

Spurred by a Hall High School freshman, their efforts are also helping the community’s four-legged and winged creatures.

The Children’s Museum in West Hartford has not only been trying to raise funds to move to a new facility, but like many nonprofits the organization counts on an annual major fundraiser to support its operating costs. Not only was the Museum’s March 21 gala at the Delamar Hotel in West Hartford one of the first events to be canceled amid the COVID-19-related restriction on social gatherings, but the facility itself has had to close to the public, drying up the revenues it receives from community visitors and school groups. 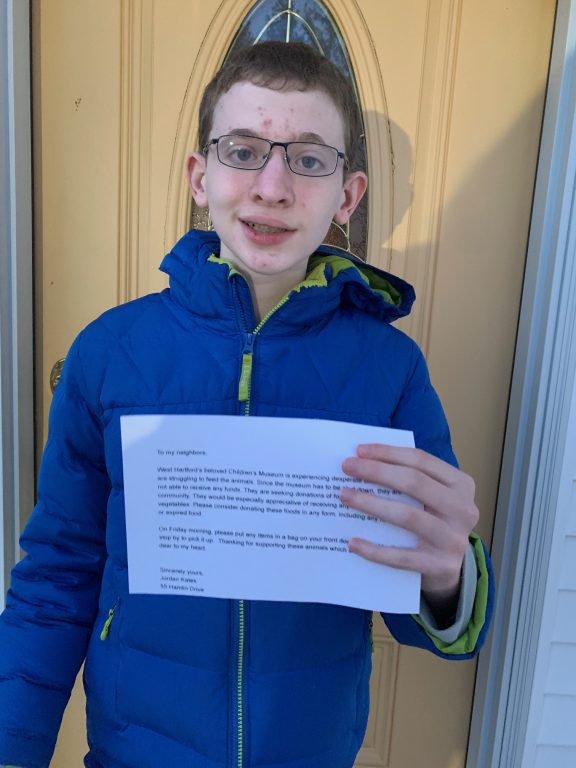 Jordan Kates with the letter he distributed around his neighborhood asking for food donations for the animals at the Children’s Museum. Courtesy of the Kates family

Last week the Children’s Museum put out a plea for food scraps to help feed the animals that live at the West Hartford facility. A bin – operational with a foot pedal to protect against germs – was placed near the back door, and there was a list of desired items.

“My son, Jordan, has been going to the Children’s Museum for years,” said West Hartford resident Shana Kates. He became a junior keeper, and worked behind the scenes assisting Nick Barnett, curator of animals and exhibits, in the sanctuary.

Shana said that when Jordan had his Bar Mitzvah, his chosen mitzvah project was assisting the Museum, gathering toys and supplies for the animals.

Jordan, now a freshman at Hall High School, is on the autism spectrum, his mother said, and has always had a passion for and love for animals.

The Children’s Museum has been reaching out to its longtime supporters for assistance during this difficult time, and Kates said that while they weren’t able to help financially, Jordan volunteered to help collect food. He typed up a letter, and wearing gloves to protect himself from COVID-19 infection, dropped it in the mailbox of about 40 households in his neighborhood and the neighborhood where his grandparents live, asking for food donations for the animals.

The community also shared the need in several posts in the Neighbors & Friends in West Hartford Facebook group, where it received hundreds of “likes” and “loves,” and comments, and the need for donations was posted on the We-Ha.com Facebook page as well. 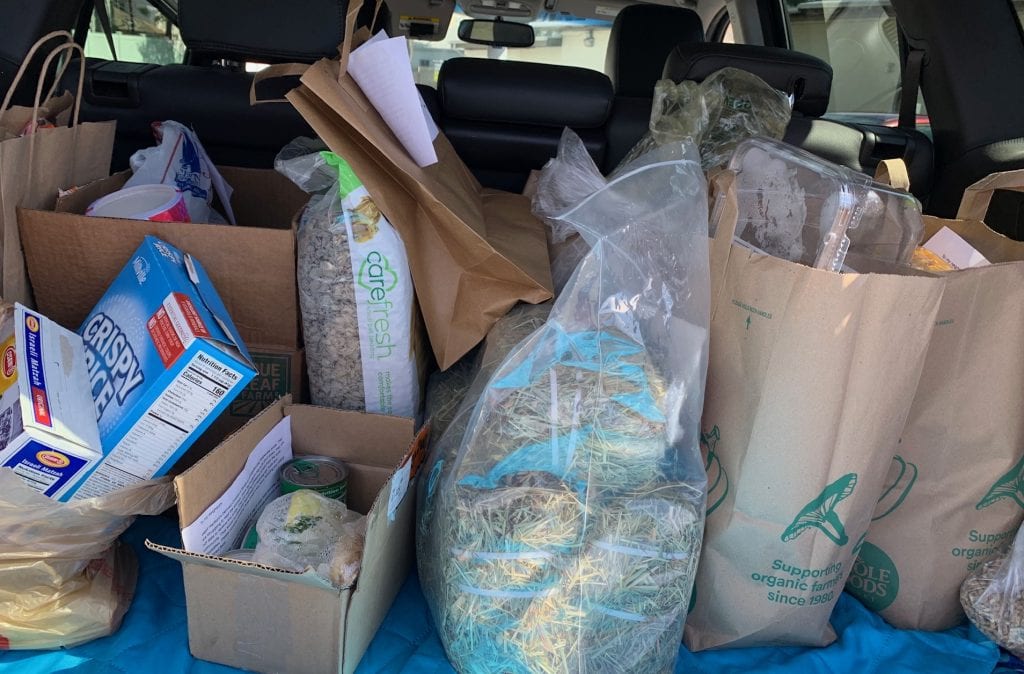 “I saw on the news that because of the coronavirus lots of places in West Hartford had closed, including the Children’s Museum,” Jordan said. He was excited to help the animals.

“It was really amazing,” Jordan said of the collection. “It made me really happy.”

“It exploded beyond our wildest expectations,” said Kates. “I’m so proud of him for giving back to the community.”

The timing was actually perfect as well, because in fear of a quarantine, many people had stocked up on more fruits and vegetables than they could possibly consume. Some of the food was past its prime, but “the animals there aren’t picky,” Jordan said.

The Kates family dropped off several carloads of foodthey collected, and others dropped off food for the animals in a bin outside the Museum.

“It really gives me a sense of satisfaction, and pride. I really love working with animals,” Jordan said.

The bin was filled to overflowing, and then some. This post appeared on the Children’s Museum Facebook page Sunday morning:

“We always knew we could rely on the community, and everyone has really stepped up. We are so grateful and thankful to have such supportive friends, members, and donors. You have touched our hearts and filled our refrigerators with so many tasty treats, that they are overflowing. We appreciate all the effort and time, and at this time are going to request a slow down in food donations. Thanks to you we’ve reached our goals for now. We appreciate everything everyone has donated, and we don’t want anything to go to waste. Our small facility is at capacity, and if you can just hang tight, we will ramp up accepting food donations again soon. In the meantime, the donation canister will not be out in the parking lot. When we can store more, we will put it out. Thank you for your kindness. All of the animals and all of our staff appreciate it so much. #thechildrensmuseumct#supportlocal #produce #donate #wildlifesanctuary #animalsanctuary #animallove #thankyou #westhartfordct @ The Children’s Museum”

“It was truly astounding how our whole community rallied together and within a manner of days we accumulated more produce that we have ever seen in our refrigerators,” Barnett said. “As trying as this time is for everyone there is still a lot of good things happening, too.” 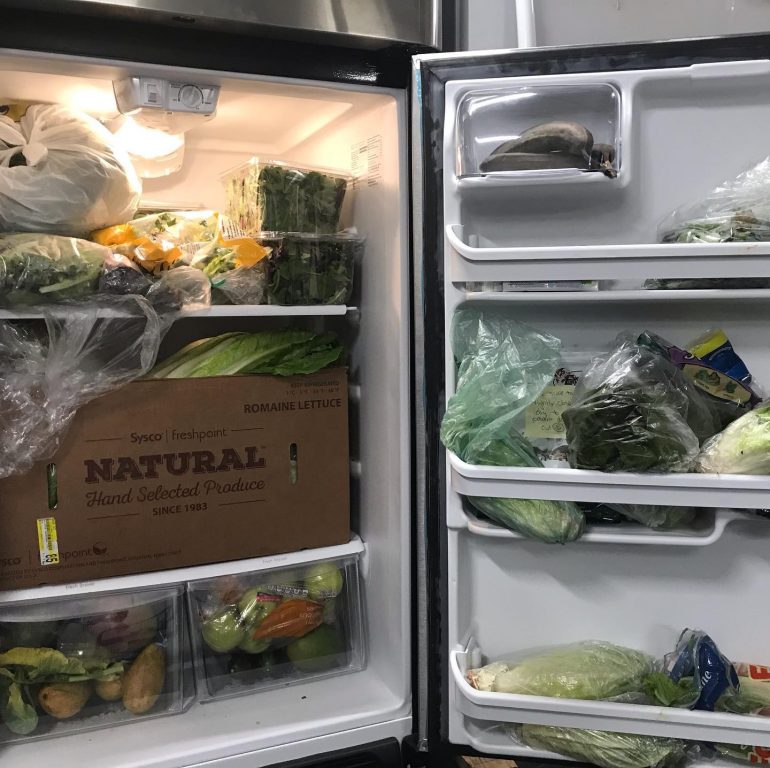 Donations of food scraps to feed the animals at the Children’s Museum in West Hartford have filled the refrigerator. Facebook photo

Although the building itself remains closed, the Children’s Museum is also doing animal demonstrations at – virtually – through live broadcasts on its Facebook page. The demonstrations take place daily at noon.

Do you have an idea for a “Silver Lining” story? Please email Ronni Newton at [email protected].