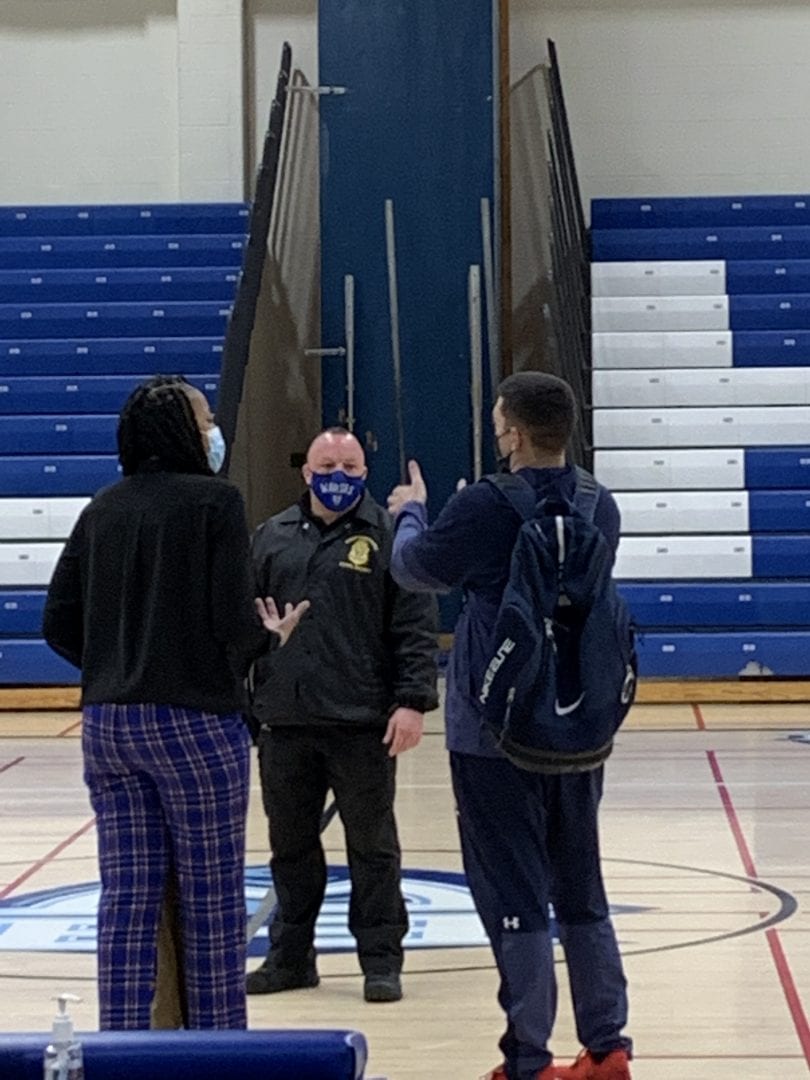 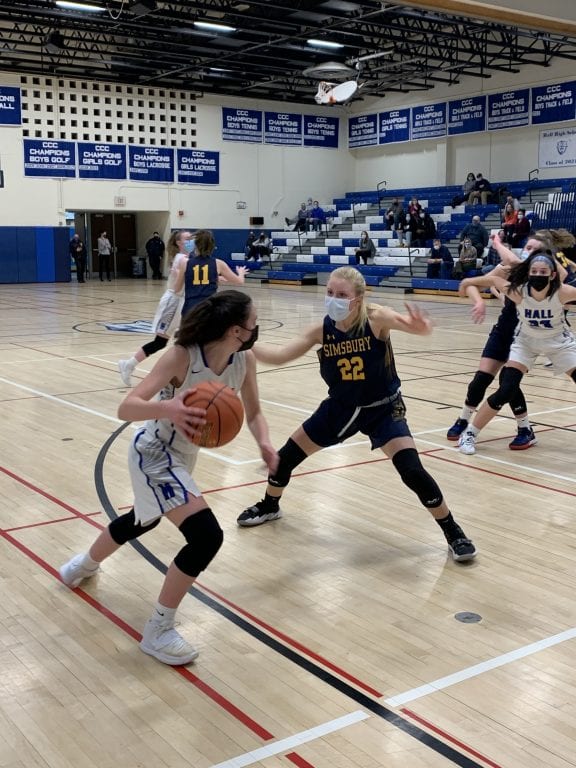 The Simsbury girls’ varsity basketball team entered Thursday’s game at Hall on a six-game win streak after dropping their season opener. The Hall girls entered the game coming off a loss that dropped them to 4-3 on the season, and minus two starters.

The on-the-court game played out as expected with Simsbury cruising to the 49-19 win. An off-the-court moment after the final horn saw coaches from both teams coming together in an emotional encounter that led to the visiting coach asking for security to escort his team to their bus. 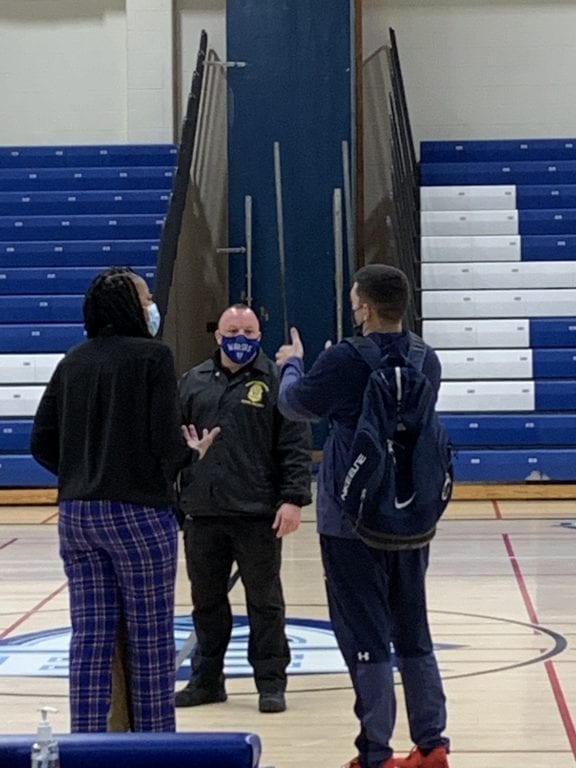 The spark for the post-game encounter seemed to be Trojan’s coach Sam Zullo calling time out with 10 seconds left while holding a 30-pont lead. Zullo’s team came out and ran scripted plays to fire up a pair of unsuccessful 3-pointers.

When asked after the game if that was what bothered Hall coach Brittany Huggins, Zullo said yes. But when asked after the game what happened, Huggins had a different answer. “I wanted to talk to my old coach.” Huggins went on to say that Simsbury assistant coach Sam Bangs was her high school coach and a friend of 20 years. She added that neither she nor her team were upset with what Simsbury did in the final 10 seconds of the game. 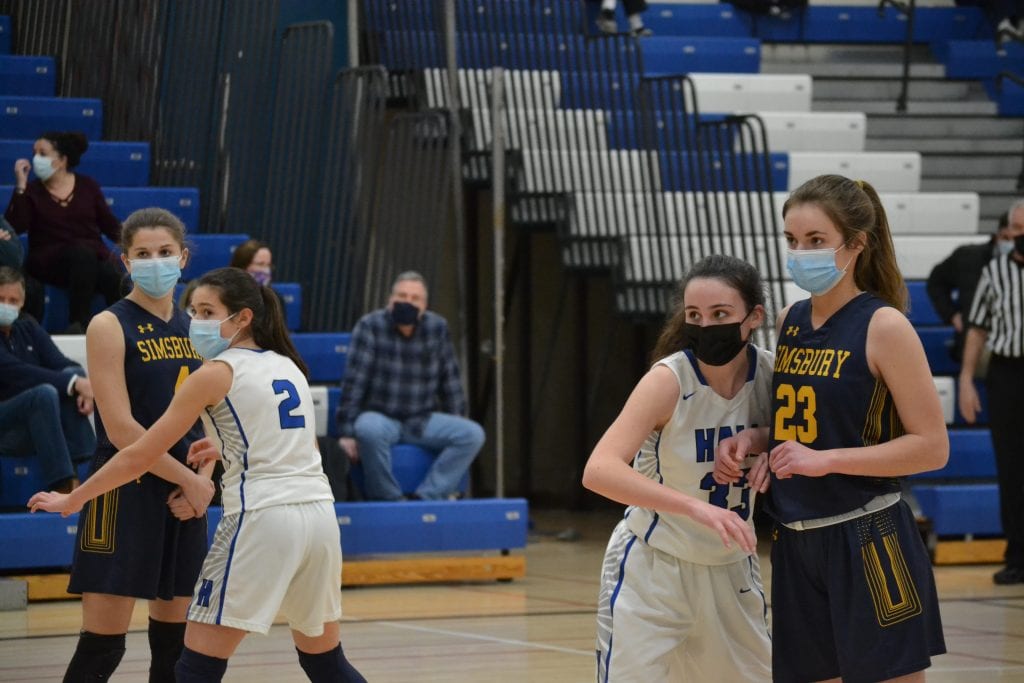 As for the game itself, both teams came out cold, with neither scoring until Simsbury’s Laura Sabia hit a three-pointer 3:38 into the quarter. The Trojans would miss a pair of layups off turnovers before Hall scored its first points on Meghan Murray’s free throws 4:30 into the first. Back-to-back turnovers by Hall resulted in two more baskets by Sabia and the quarter ended with Simsbury up 10-2.

The visitor pushed it to 16-2 in the second quarter before the Warriors’ Talia Sortman stole the ball from Simsbury’s Faye Kaplinski and found teammate McKenzie Mandyck for Hall’s first field goal of the game. 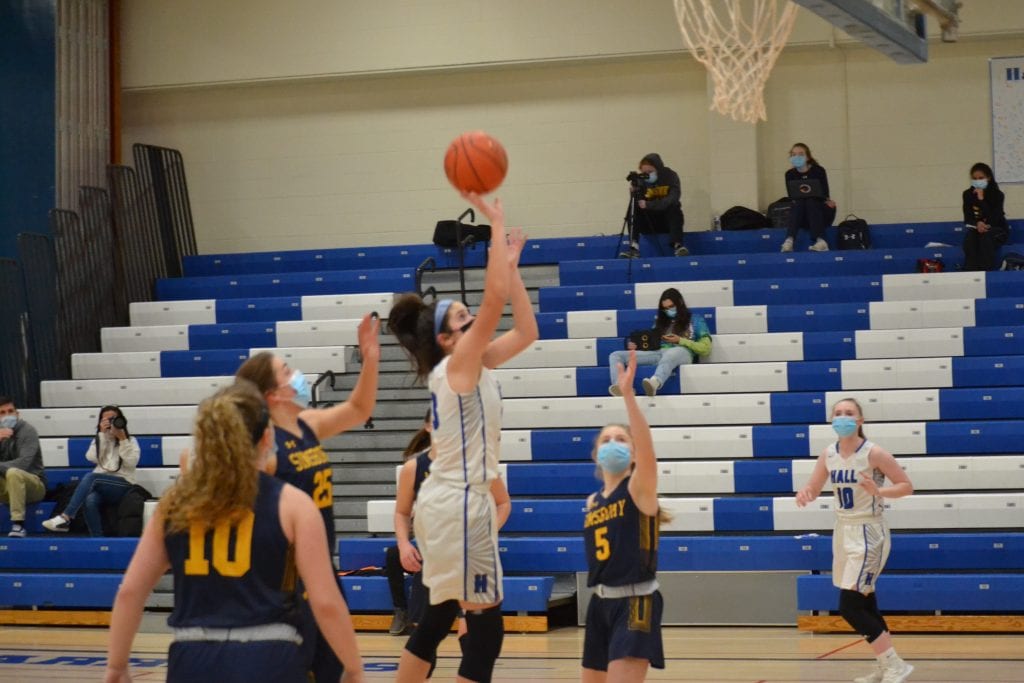 Simsbury drained a series of 3s in the second quarter from Sabia, and Kaplinski paced a 16-5 quarter and gave Simsbury the 36-7 lead at the half.

Hall’s scoring consisted of just one field goal and five free throws against a pressing, quick Trojan defense. “We need to learn to control the things we can control in a game,” said Huggins of her team.

Hall’s defense had some good moments in the third quarter despite the lopsided score. Senior Jordan Farrell – nursing an injury – stood her ground and took a hard charge call against Sabia. Sophomore Abigail Magendantz had several blocks on Simsbury attempts. That led to a brief charge by the Warrior’s as Julia Zydanowicz hit back-to-back three’s 30 seconds apart. 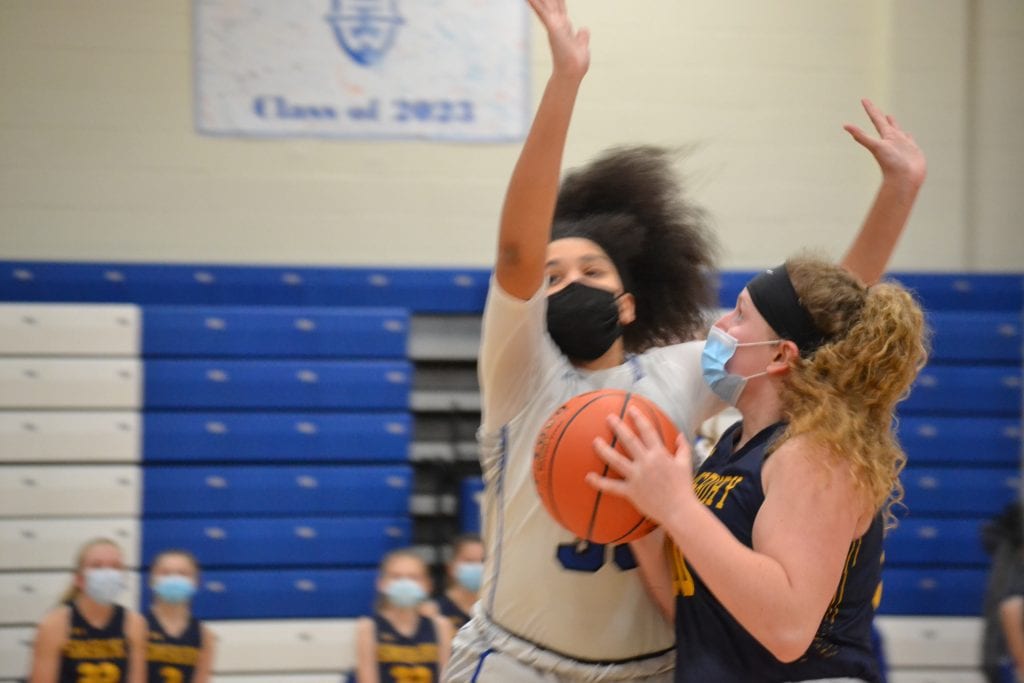 Hall outscored the visitors 10-7 in the third quarter.

In the fourth, both coaches emptied their benches with liberal substitutions. Simsbury used crisp passing to break the Hall press and went on a 12-0 run to make it a 45-17 game. It was more than halfway through the quarter when Magendantz hit a driving layup to give the hosts their first points of the quarter.

Simsbury (7-1) was led by Sabia’s 14 points, less than a point off her season average. Senior Mary McElroy added 11 for the Trojans.

Hall (4-4) returns to action on Monday when they face Northwest Catholic. 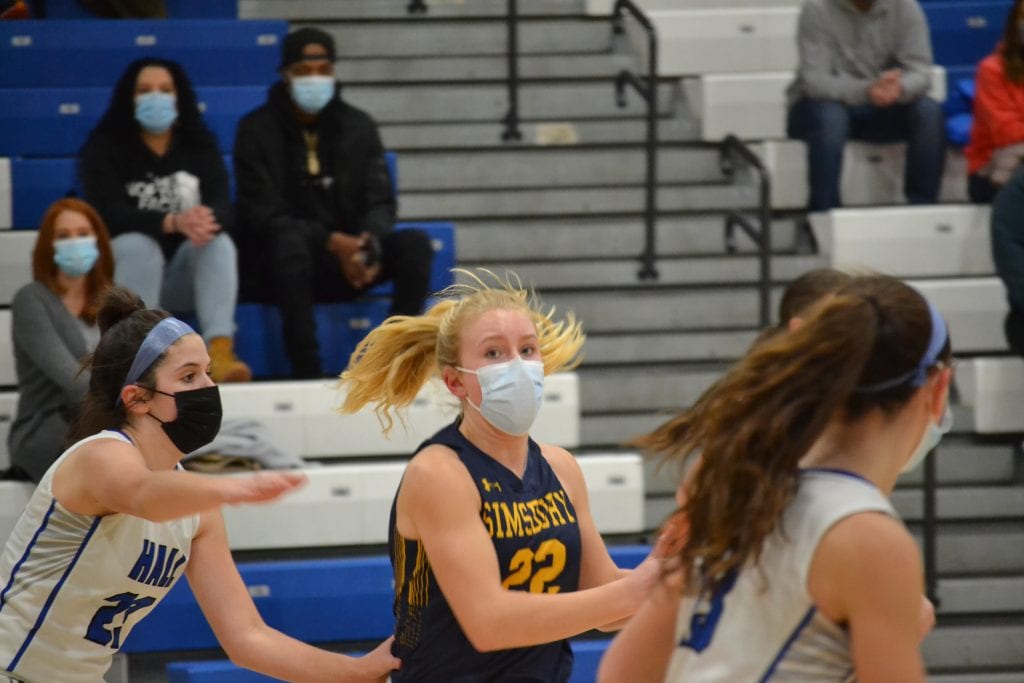 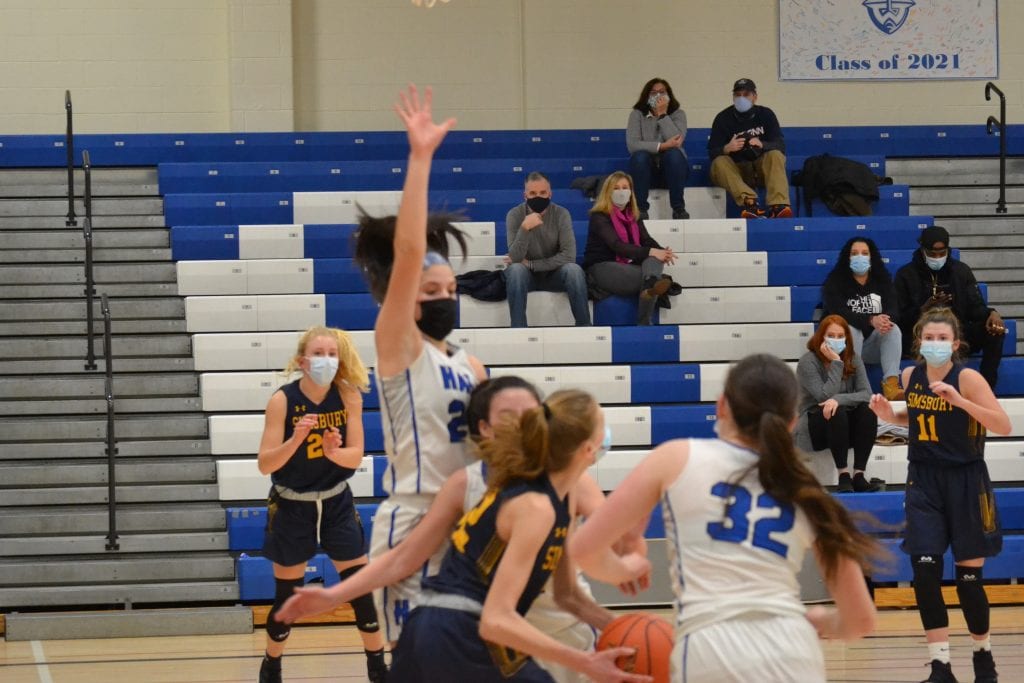 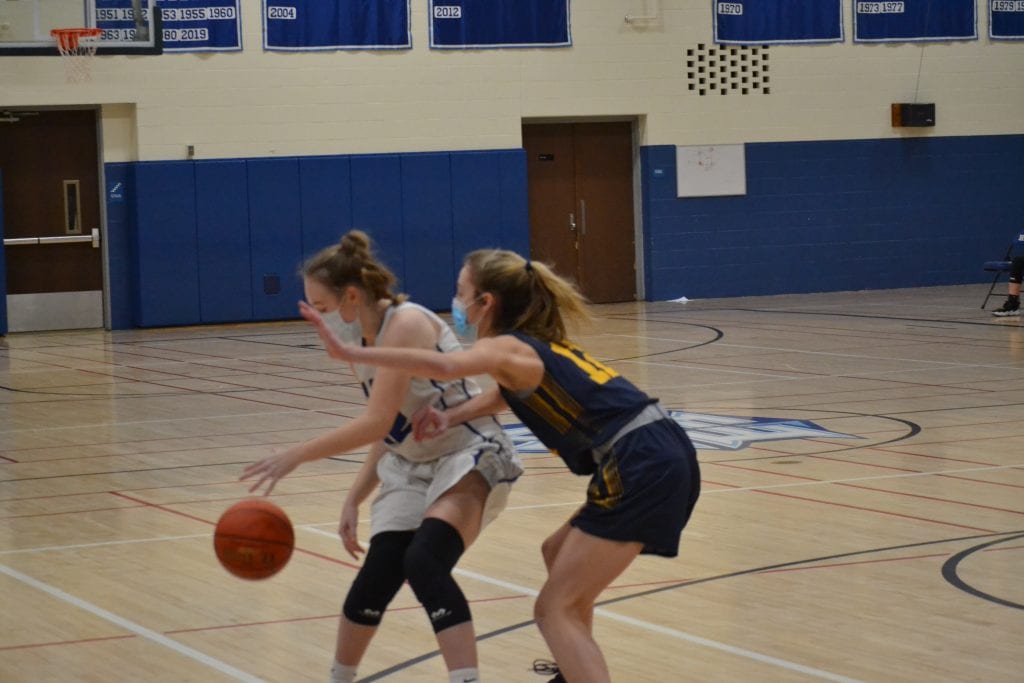 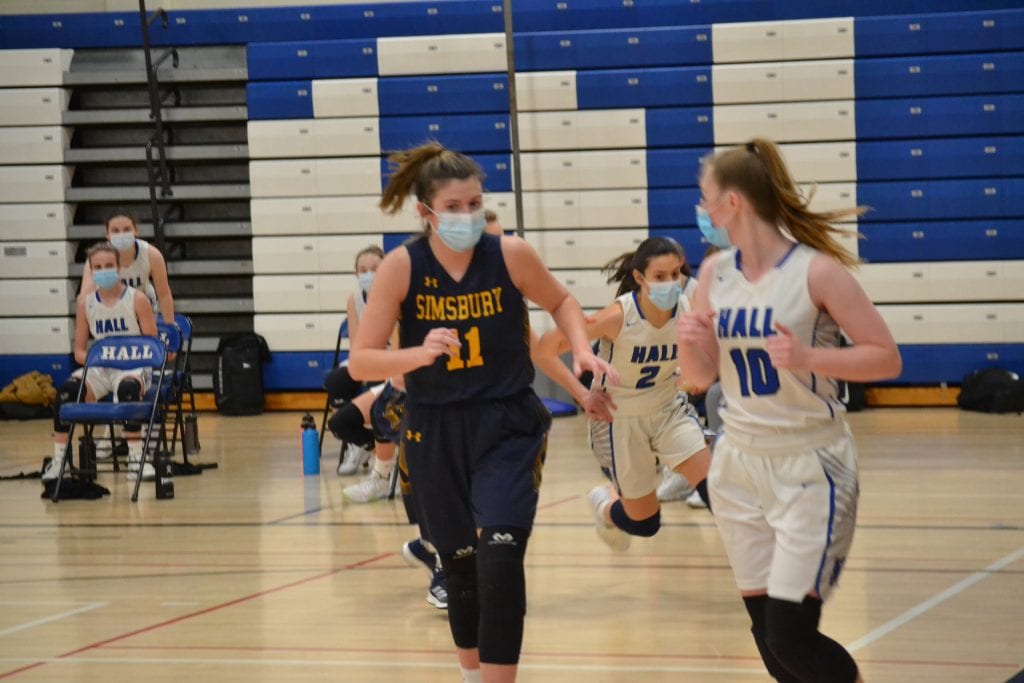