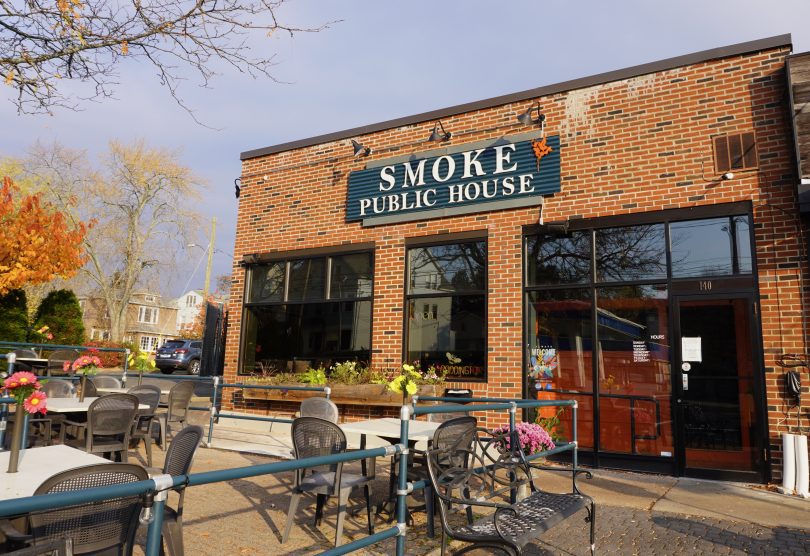 Smoke Public House is open as of Wednesday, Nov. 10, at 140 Park Road in West Hartford. 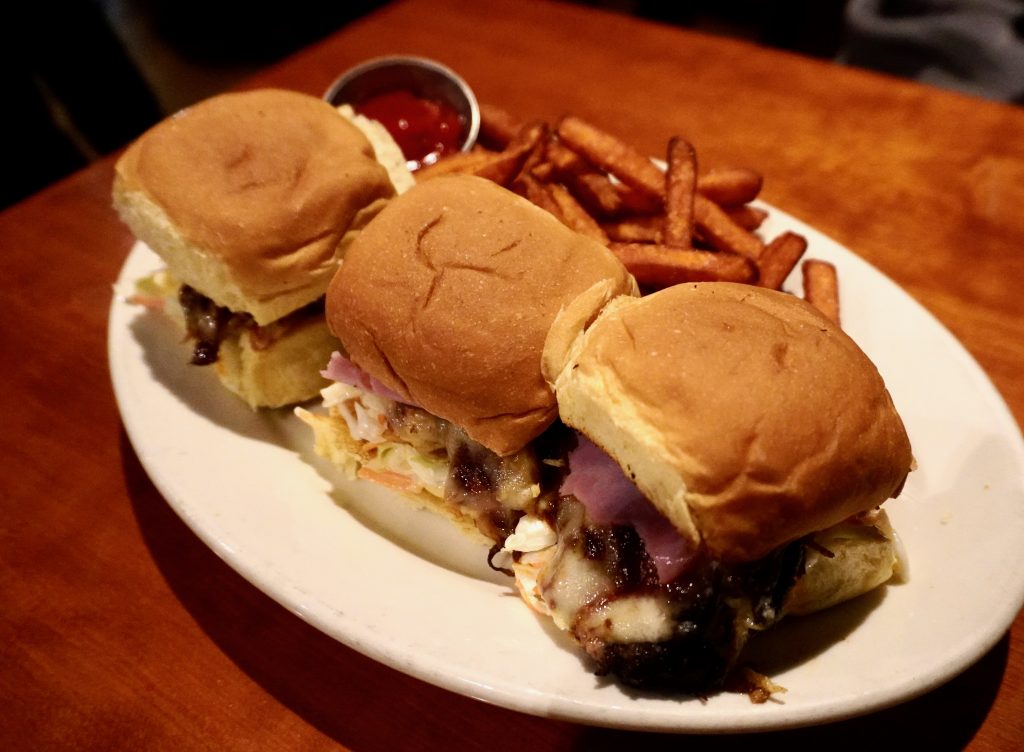 Smoke Public House offers smoked foods – like the brisket, chicken, and pork slider trio – plus a variety of other menu items in a casual and vibrant setting. Photo credit: Ronni Newton

It’s been said where there’s smoke there’s fire, and Rich Sin-Clair, who has just opened Smoke Public House in West Hartford, is hopeful his new restaurant catches on like wildfire.

“I’m overjoyed,” said Sin-Clair. “This is something I’ve been looking forward to for a long time.” 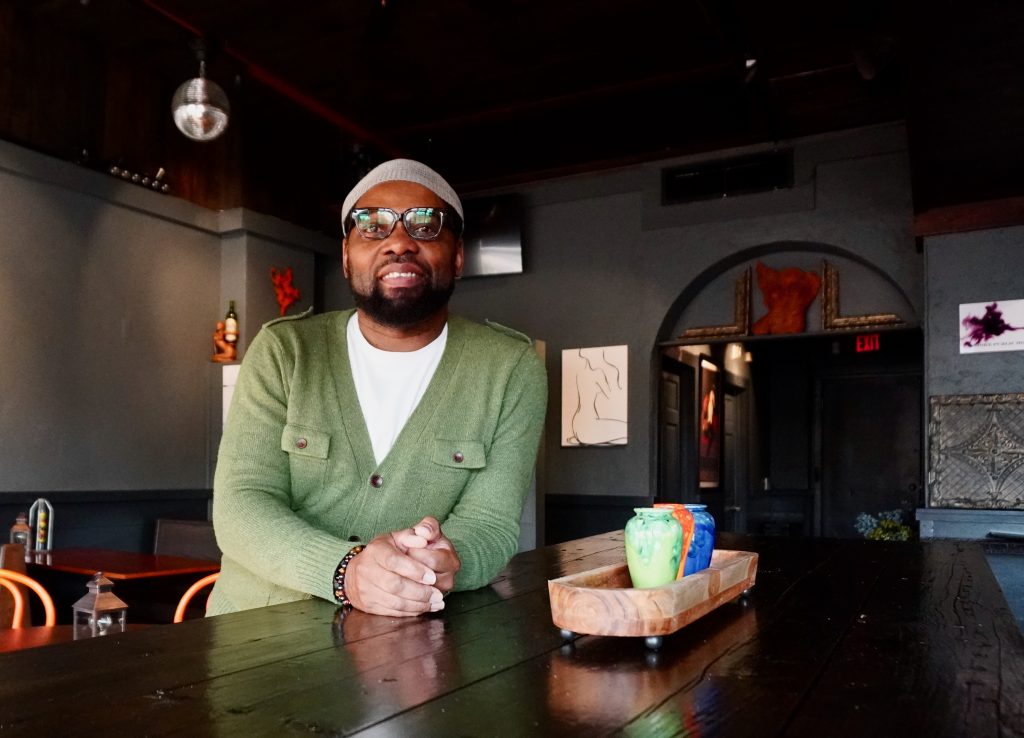 Smoke Public House is located in the former Beachland Smoke space. Sin-Clair, along with business partner Jennifer Scully, bought the business from Chip Kohn of Beachland Restaurant Group in September.

A veteran of the hospitality industry, including more than a decade as the director of food and beverage and general manager at Tumblebrook Country Club, Sin-Clair had known Kohn for years and had been helping him out in the former restaurant when the opportunity to buy the restaurant presented itself.

Sin-Clair is British, and his goal was to have a restaurant with broad appeal, a true English “public house” which has a bit of something for everyone.

“For the young and old, and everyone in between,” he said. “I want everybody to be there, all races, all cultures, to come in and say, ‘There’s something for me.'” 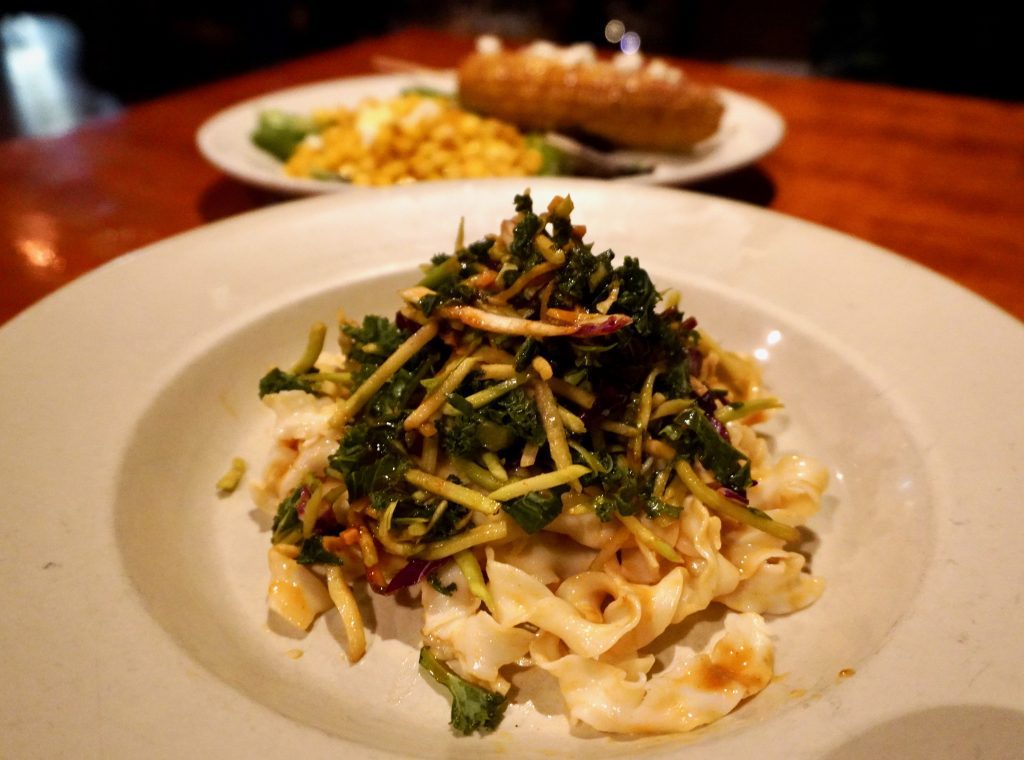 The smoker remains in the kitchen, and is getting great use for the brisket and wings. “I’ve never been a brisket person, but this brisket is really good,” he said, and the slider trio, which includes brisket, chicken, and pulled pork ($12, accompanied by regular or sweet potato fries, or slaw) already has gotten rave reviews from friends and family who have sampled the fare. 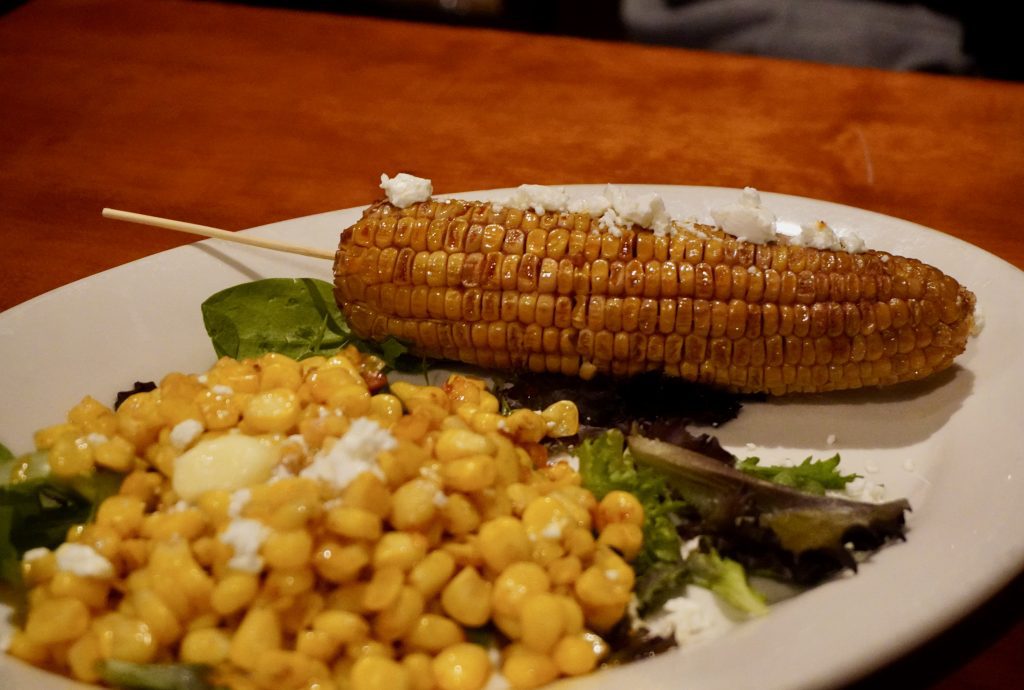 Appetizers ($10-$16, for generous servings) include the two-way street corn; crispy squid, prawn, and peppers in a spicy/sweet chili sauce; candied bacon-wrapped dates; and a charcuterie and a hummus platter.

There are hand-helds (served with choice of fries or slaw, $12-$19) like the brisket sliders, shrimp tacos, a vegetarian “smoked power wrap,” and the folded kimbap which is wrapped in seaweed. 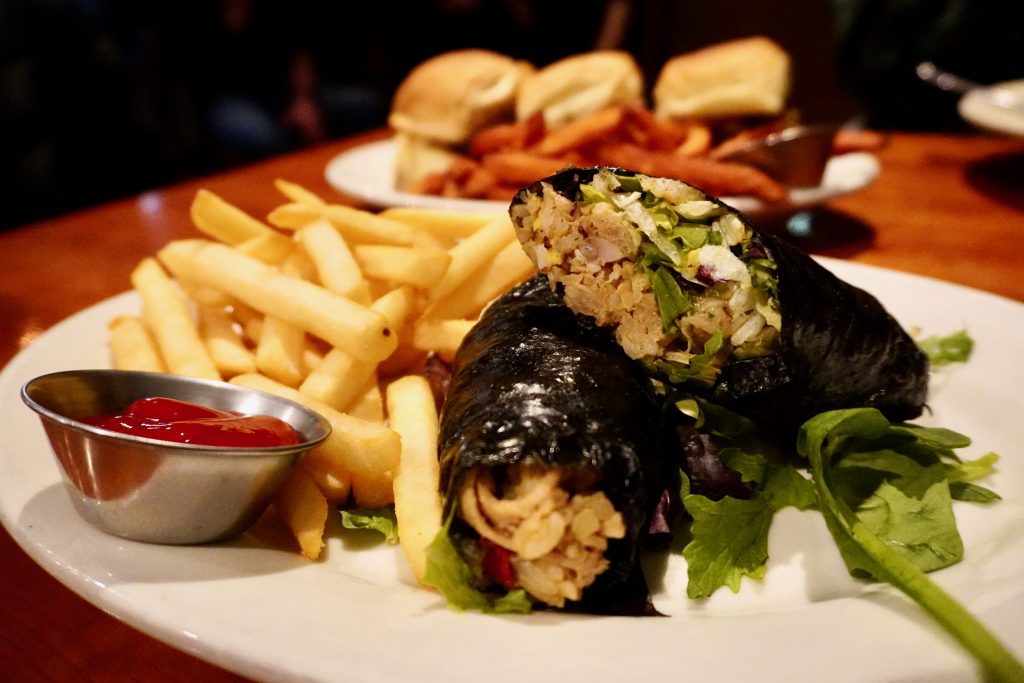 The “really cool salads” come in appetizer or meal portions, and include a zesty Asian noodle salad, and Cobb and Caesar salads.

Large plates ($19-$28) also feature something for everyone, from the vegetarian grilled cauliflower steak, to smoked roasted chicken, brisket, or ribs, served with biscuits and a variety of other included sides. 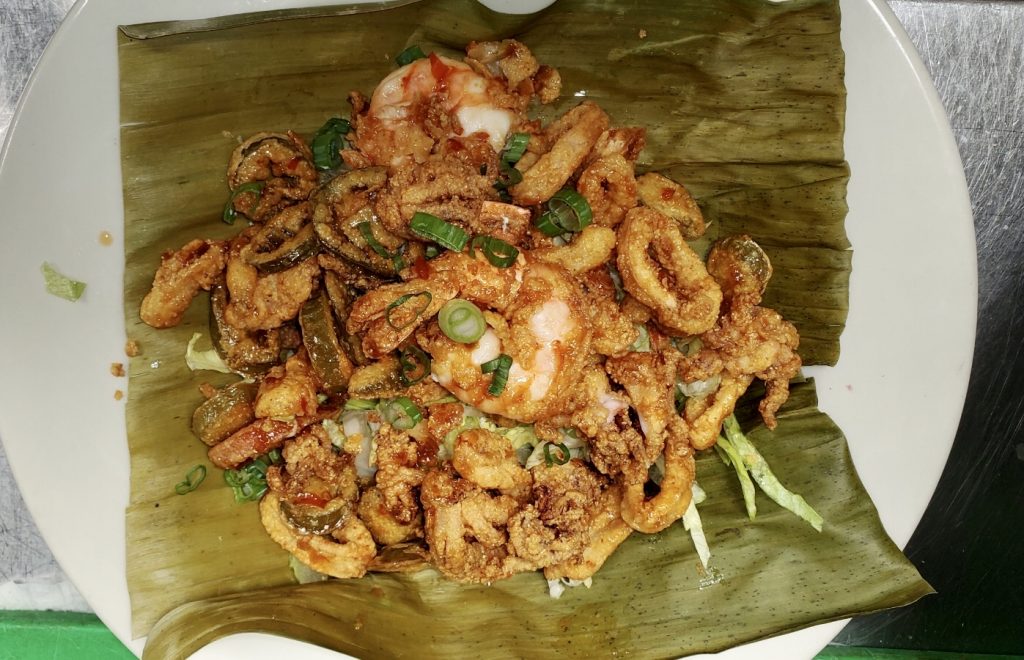 The full bar features seasonal craft cocktails as well as “bartender specialties” that change frequently, as well as draft and bottled/canned beer and wine. 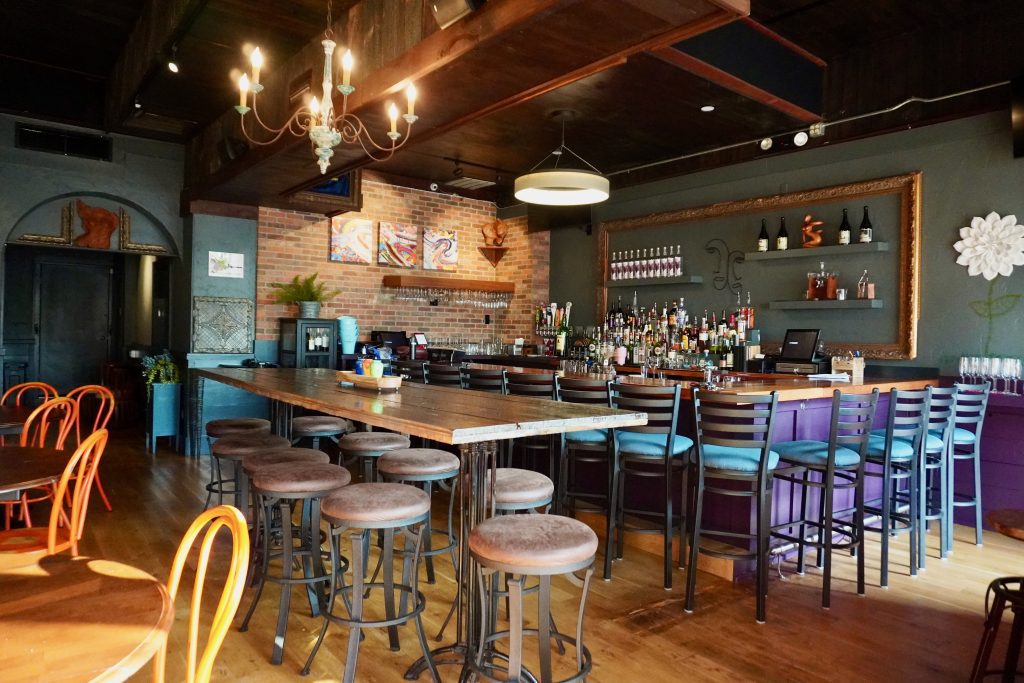 Sin-Clair has opened up the interior and the decor has been updated to match the colorful and eclectic menu, with casual seating surrounding low tables, a hightop communal table, booths, and plenty of space around the bar. If you need a snack the moment you sit down, many of the tables have skittles in dispensers that were purchased as table decorations.

While Sin-Clair designed the menu, he gives all the credit for the decor to Scully. “She put her heart and soul into designing the space,” he said.

He hopes everything about the experience of visiting Smoke Public House will be enjoyable. 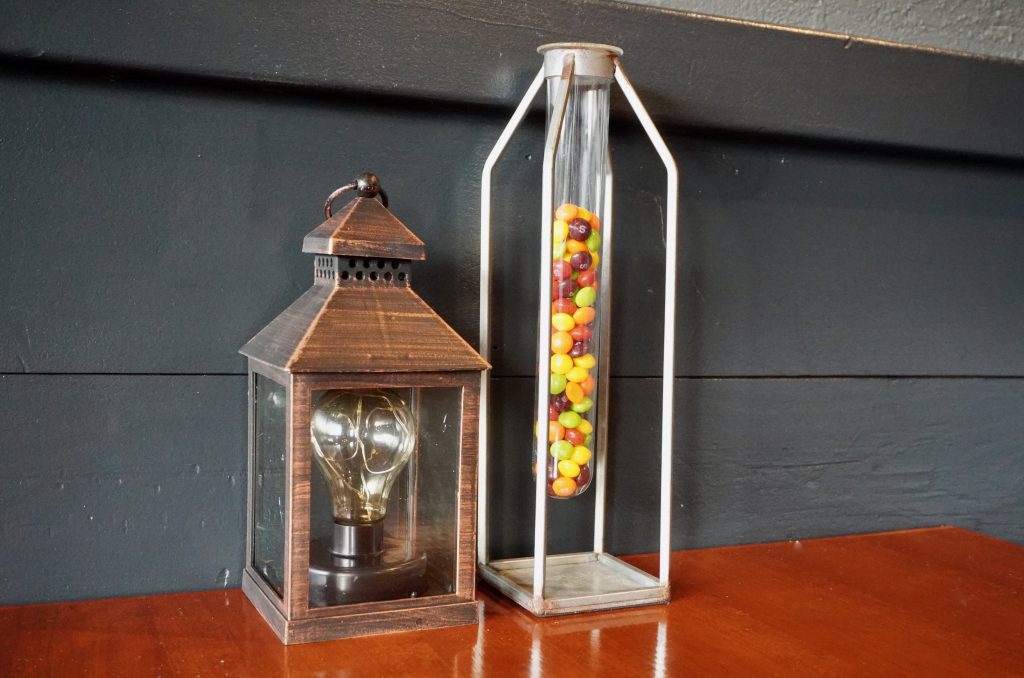 Smoke Public House seats a total of 63, including outdoor seating on the expanded patio. While the weather remains favorable diners will can enjoy a comfy outdoor couch as well as table seating.

Finding staff, particularly back of house staff, is a challenge for many restaurateurs these days, but Sin-Clair has relied on his network of connections and is doing some of the cooking himself in addition to running the restaurant.

Smoke Public House is open daily other than Tuesdays, from 11:30 a.m. until 10 p.m., and will stay open later in the evening on weekends. 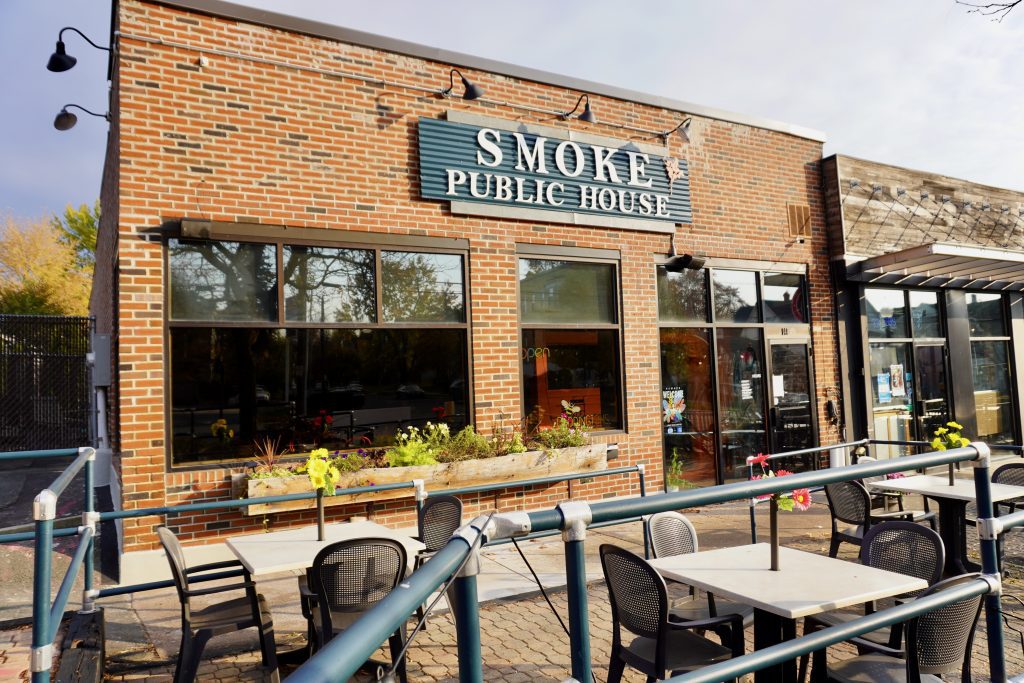 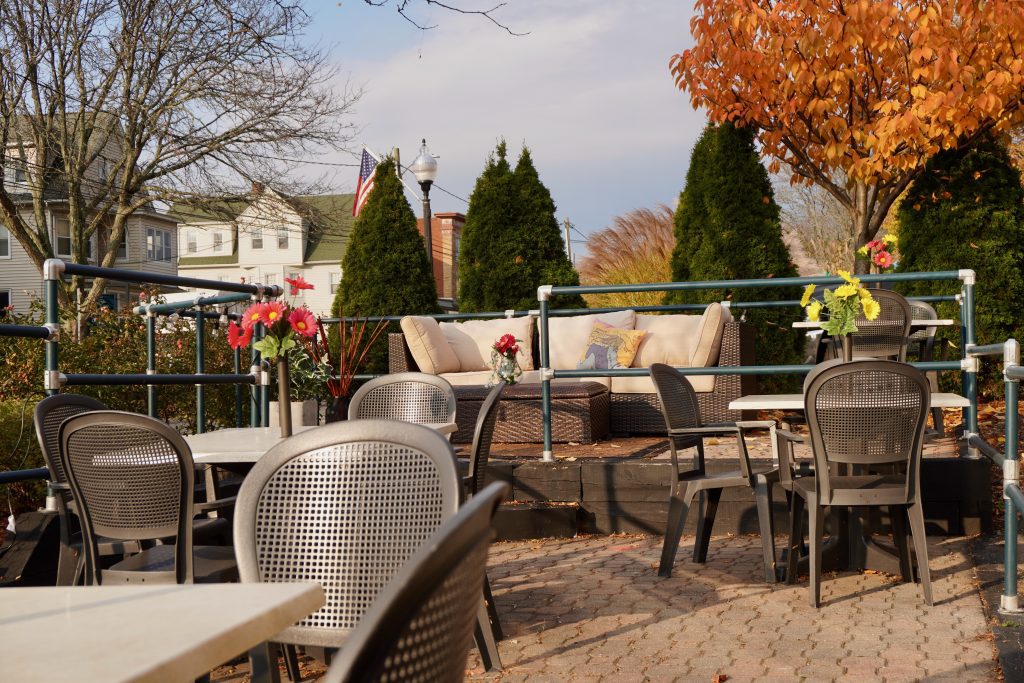 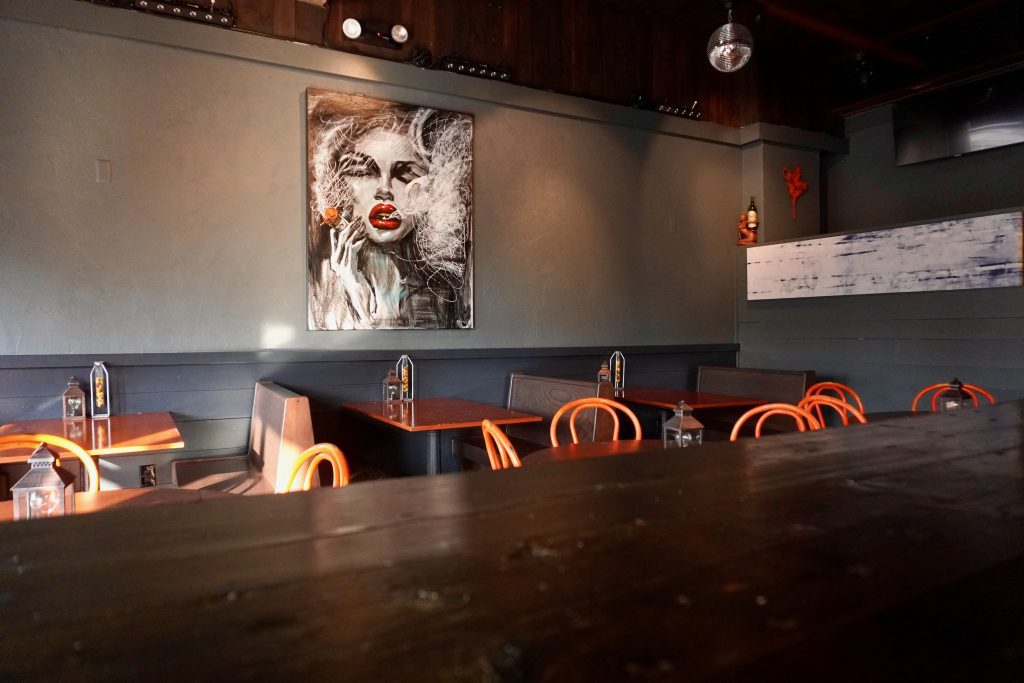 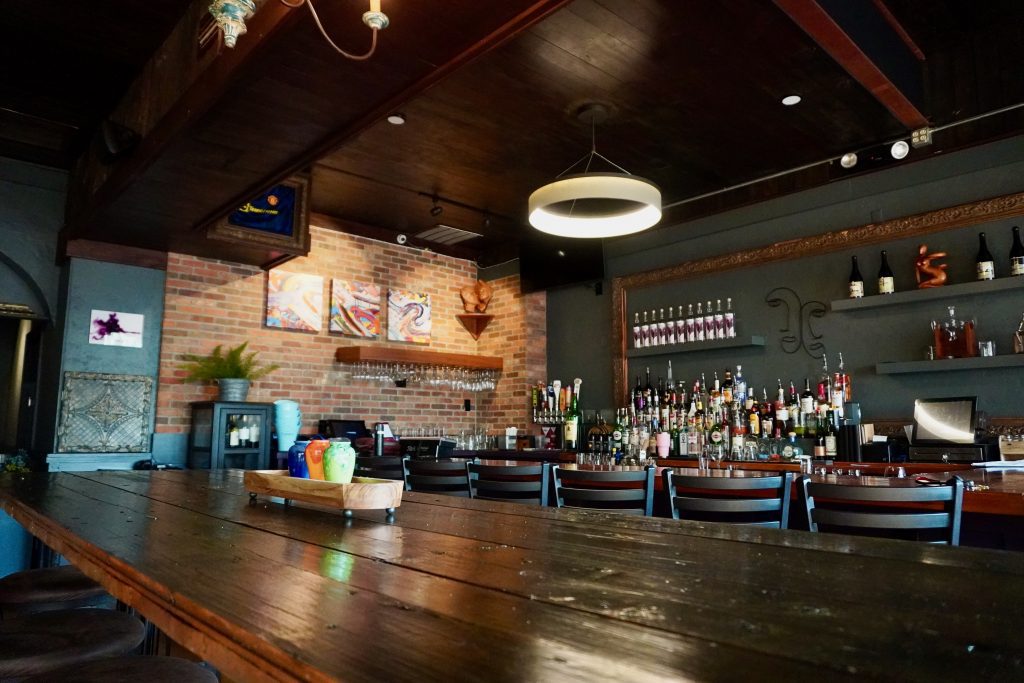 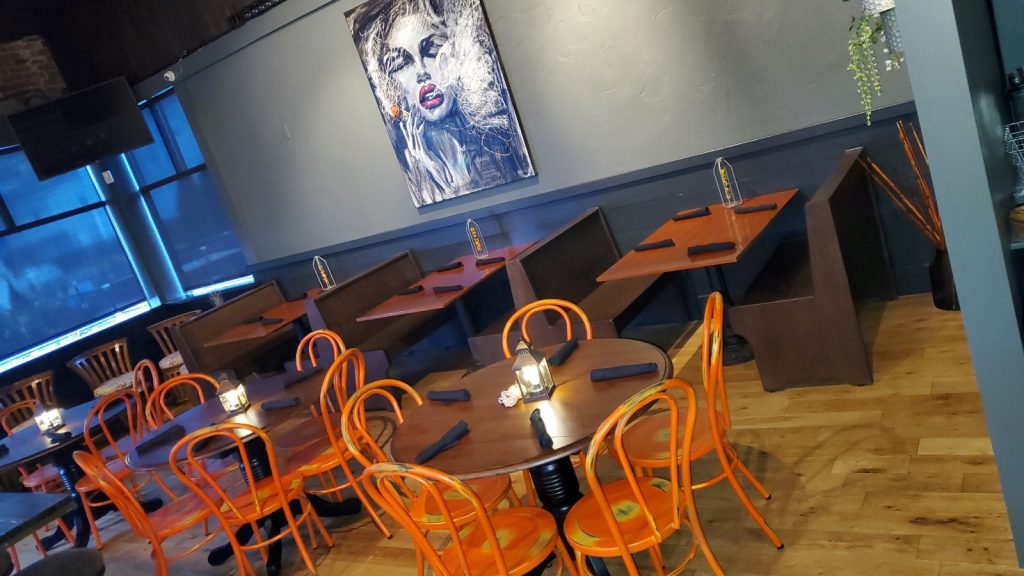 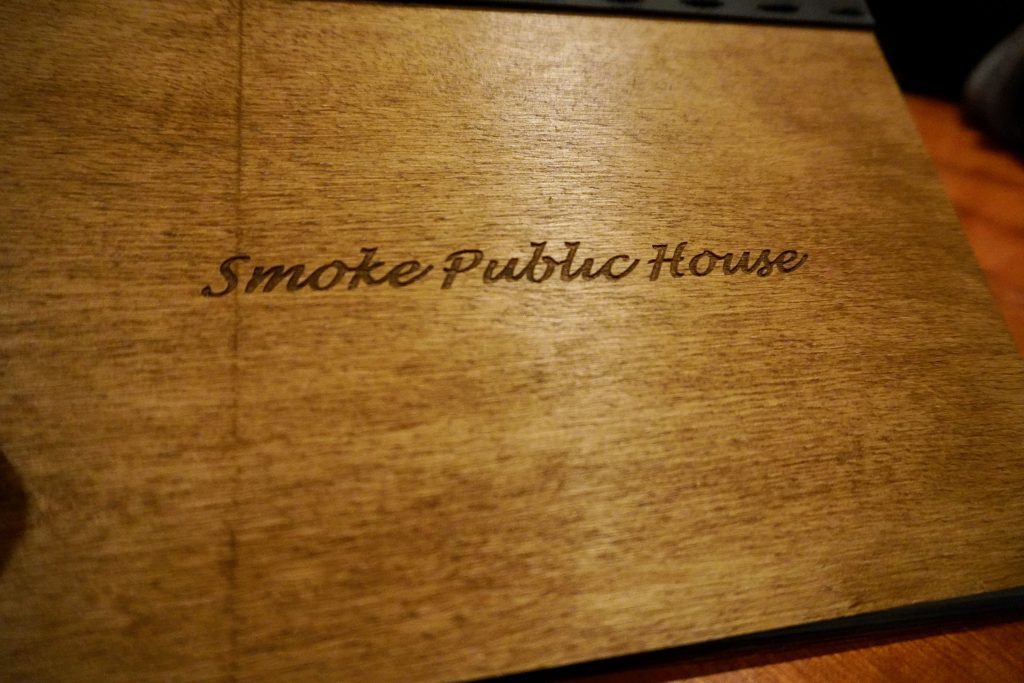 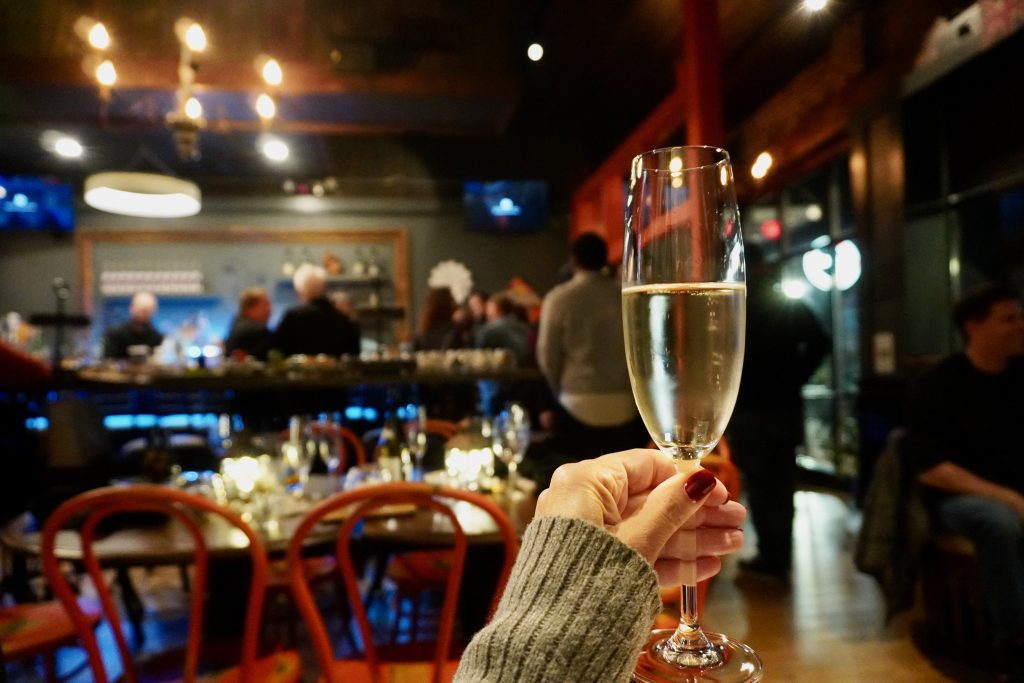 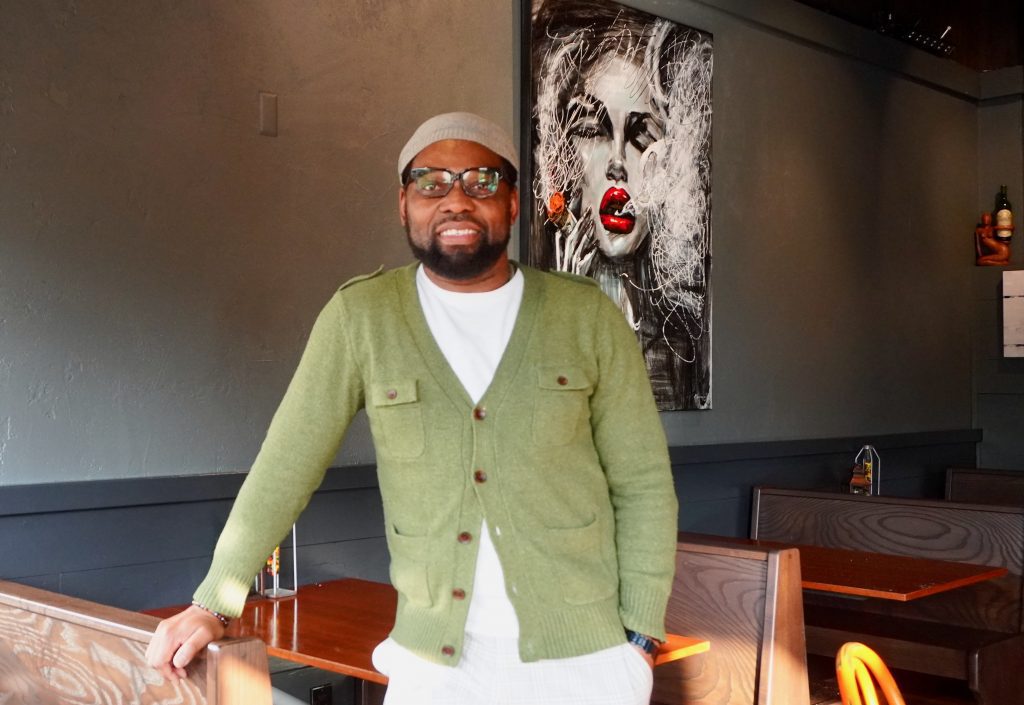