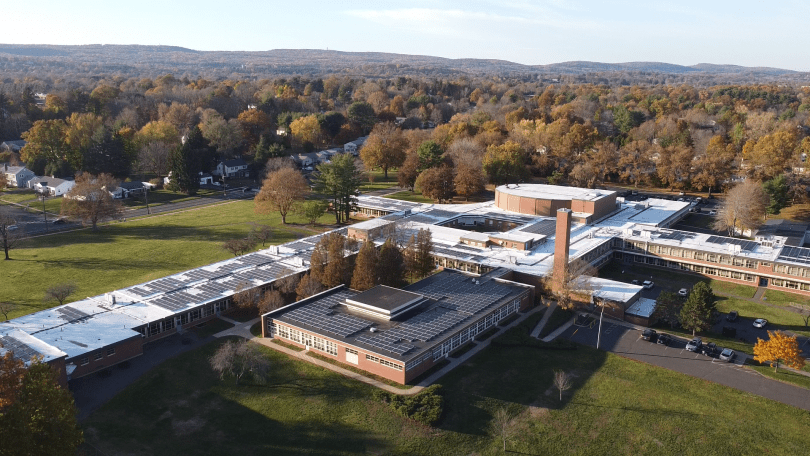 West Hartford’s commitment to renewable energy has received a major boost – courtesy of the sun and a brand new solar array that has been completed on the new roof of King Philip Middle School.

Verogy, the Hartford-based solar energy developer that installed an array on the roof of Town Hall in October 2019, also constructed the King Philip system, which at 527 kilowatts is roughly five times larger due to the space available on the roof of the single-story building.

In a news release, the town indicated that the the King Phillip system, “consisting of 1,368 modules, is expected to produce 592,279 kWh of clean energy in its first year, the equivalent to offsetting CO2 emissions from 47,121 gallons of gasoline.”

The town will purchase the electricity generated by the system at a fixed rate for the next 20 years through a Power Purchase Agreement (PPA), and is expected to save more than $250,000 over the life of the project.

Bryan Fitzgerald, director of development for Verogy, said the company is excited about completing their second project for the Town of West Hartford. “When municipalities save money on their utility costs, they can redirect those savings to important programs for the community,” he said in a statement.

“Recent increases in our utility costs make it even more important that we take control of our energy expenses,” West Hartford Energy Specialist Catherine Diviney said in a statement. “Partnering with Verogy again is helping West Hartford save money and support clean, renewable locally-generated energy; it’s a real win-win.”

The array, which is a Class I Renewable Energy Source, takes the town a major step closer to complying with Gov. Ned Lamont’s September 2019 Executive Order No. 3, which calls for a 100% zero carbon target for the electricity sector by 2040.

As is the arrangement with the Town Hall array, Verogy installed the system, and owns and operates it, selling power to the Town of West Hartford at a lower rate than it could be obtained from other utilities or suppliers. As a municipality, the town itself would not be able to take advantage of the Zero Emission Renewable Energy Credit (ZREC) Program.

The King Philip system will definitely produce way more than the building is using at certain times, and the town is participating in “net metering,” which provides credit to the town against future bills for excess energy that is produced and fed back into the grid.

King Philip Assistant Principal Justin Gusy said the array will also be appreciated by the school for educational purposes. “We are so excited to have solar at KPMS, both from an environmental and educational perspective. I hope that we can use the array as a teaching tool in some of our classes,” he said.

King Philip Middle School, which had a new roof installed over the course of three summers, is a very large, one-story spread out building, so it can support a massive array, according to Diviney.