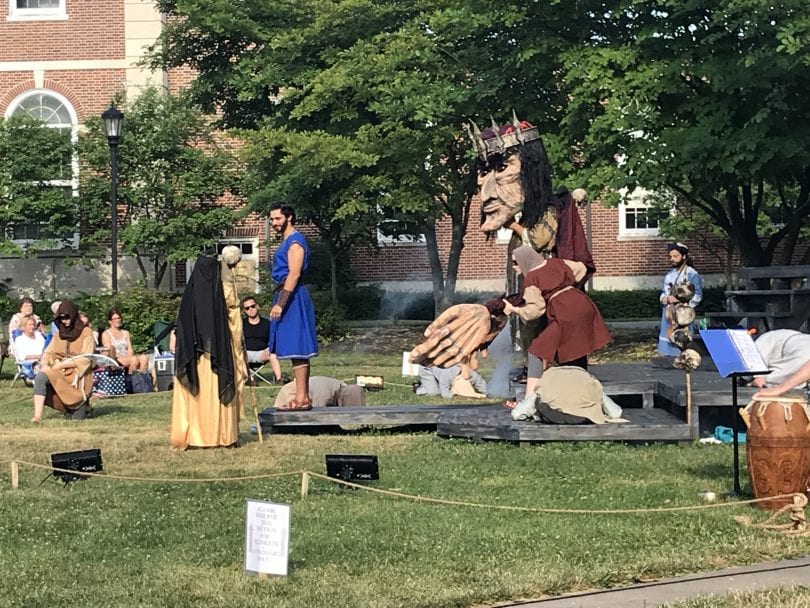 Pericles, who was played be Andrey Vdovenko, and King Antiochus, played by Michael Nowicki, confront each other in the opening scene of the play. (Photo Credit: Maddie Geerlof)

Capital Classics’ 28th annual Shakespeare Festival at the University of Saint Joseph in West Hartford opened July 12 and will run through July 29. 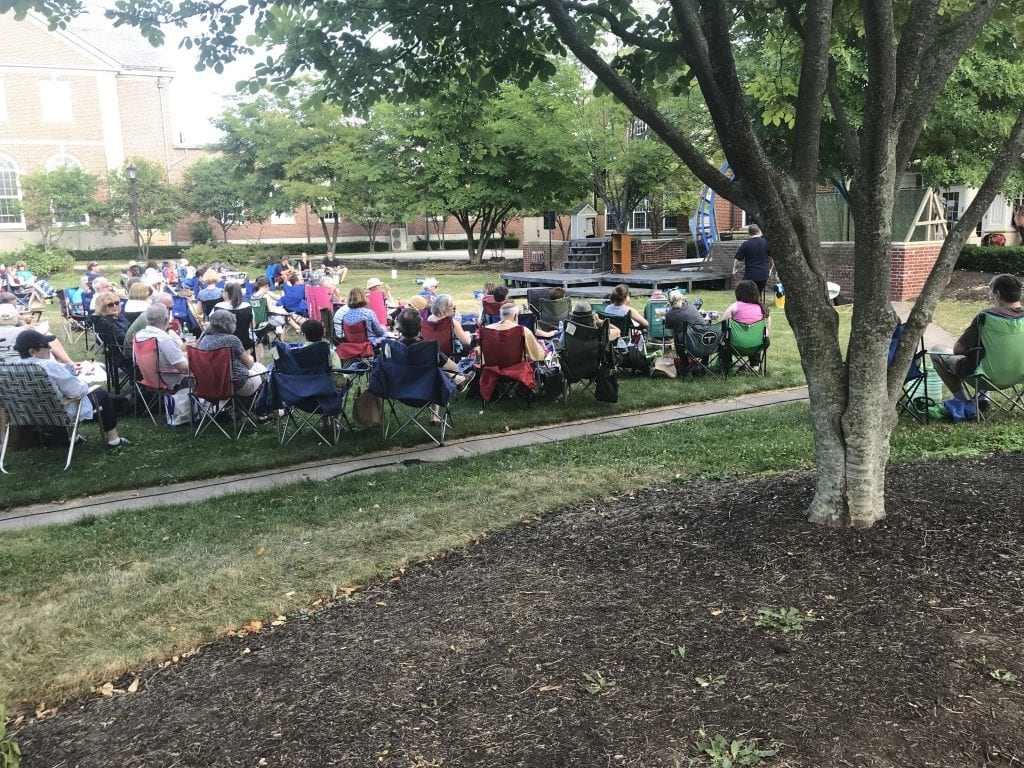 Spectators sit in the shade as they enjoy the play and preceding lecture. Photo credit: Maddie Geerlof

By Ryley McGinnis and Maddie Geerlof

The outdoor stage was set and the actors were ready Sunday night to put on their fourth production of Pericles, and even the 80-degree heat and stifling humidity couldn’t keep the audience away.

The annual Shakespeare Festival put on by Capital Classics started on July 12 with the first performance of Pericles, and shows will continue to play every Thursday through Sunday evening until July 29.

In its 28th year, the Shakespeare Festival has featured a variety of Shakespeare’s plays, like last year’s Love’s Labour’s Lost, and every year has gotten bigger, said Edwin Thrower, the president of Capital Classics. “We don’t want this to be a secret from people, we want everyone to know about it,” said Thrower.

Thrower said the support so far has been great, even during a rain transition on Saturday night when lightning and clouds stopped the show. “It’s great to see people come out to support the arts,” said Thrower.

The partly cloudy sky on Sunday night gave no interruption to the night’s production, and most of the audience huddled in the shade. Some brought tables and snacks – and all brought some laughter. The Filosa family were just some of the prepared play-goers.

Kurt Filosa attended the festival a few years ago, but for the rest of the family, this was their first time. Emma Filosa had a friend in the play, and that was just one of the reasons she attended. Kathleen Filosa said the play was “fabulous,” and all liked the use of props to create the sea and show different scenes. “I think it’s a really artistic approach to it,” said Emma Filosa. 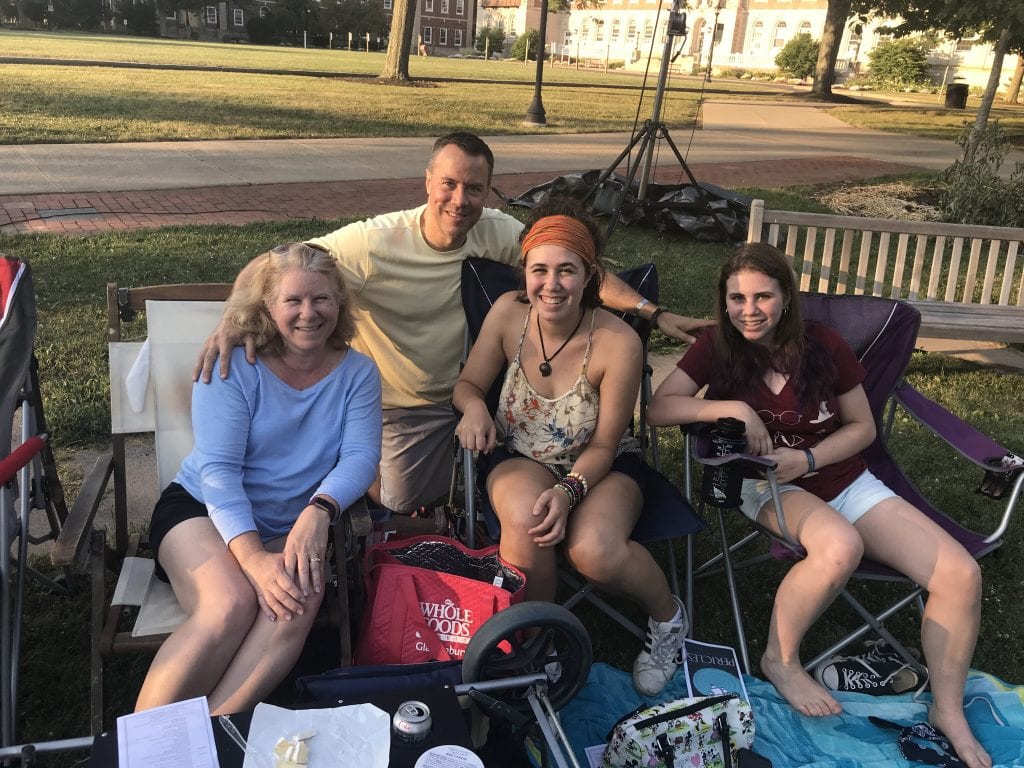 The Filosa family enjoys an evening out to support a friend in the ensemble. Photo credit: Maddie Geerlof

Kurt Filosa said that the outdoor setting and open stage was one of the reasons he came back, in addition to his love for Shakespeare which started back in high school when he and his wife, Kathleen Filosa, took a Shakespeare class together. They said they are now happy to attend with their kids, Emma and Laura.

A group of friends who were also in attendance enjoyed the performance over a picnic, complete with wine and cheese, that they brought. Kathleen Masse of West Hartford and  Holly Winters of South Glastonbury said, “The play is very entertaining … and I think it is very well done.” Winters said one of her favorite parts of the performance was getting to see the elements of theater up close. 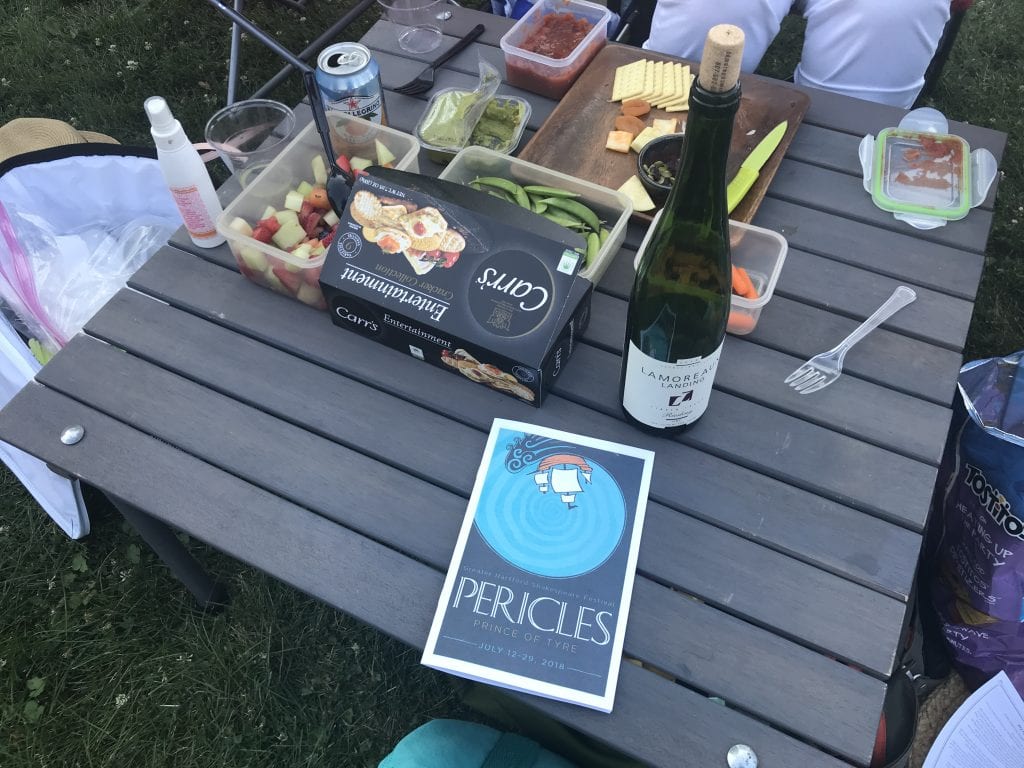 Winters and Masse, who heard about the performance from a friend who has come to the festival every year, said they would enjoy coming back next year.

Thrower urged the audience to tell family and friends about the festival and thanked them for their support. 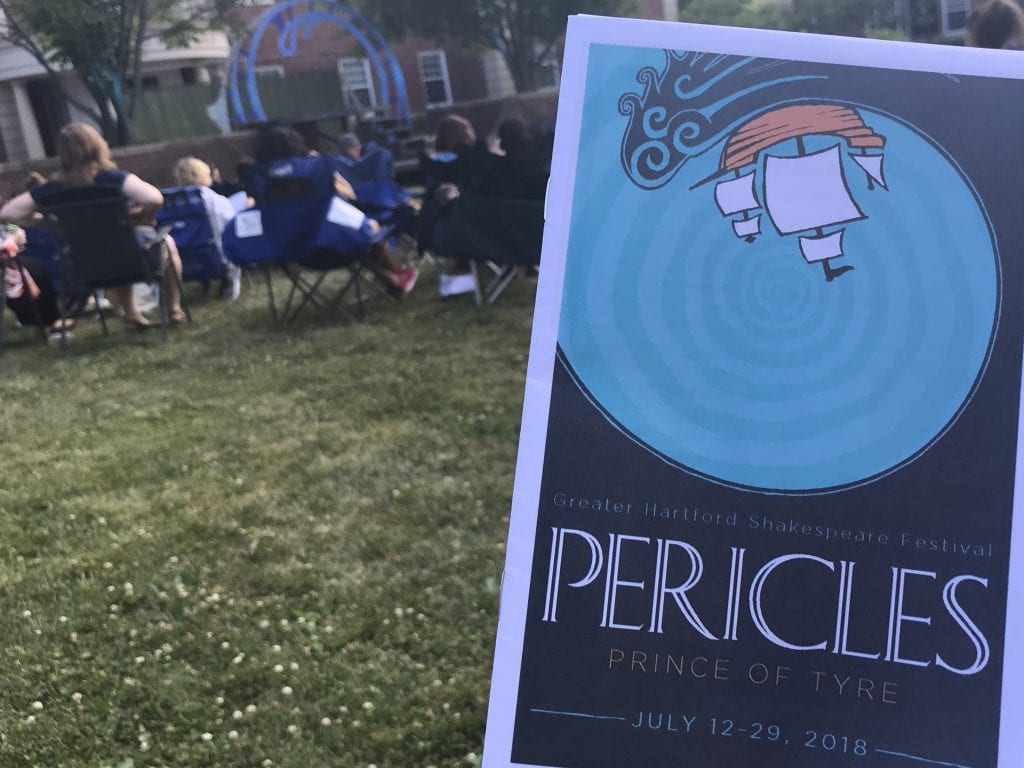 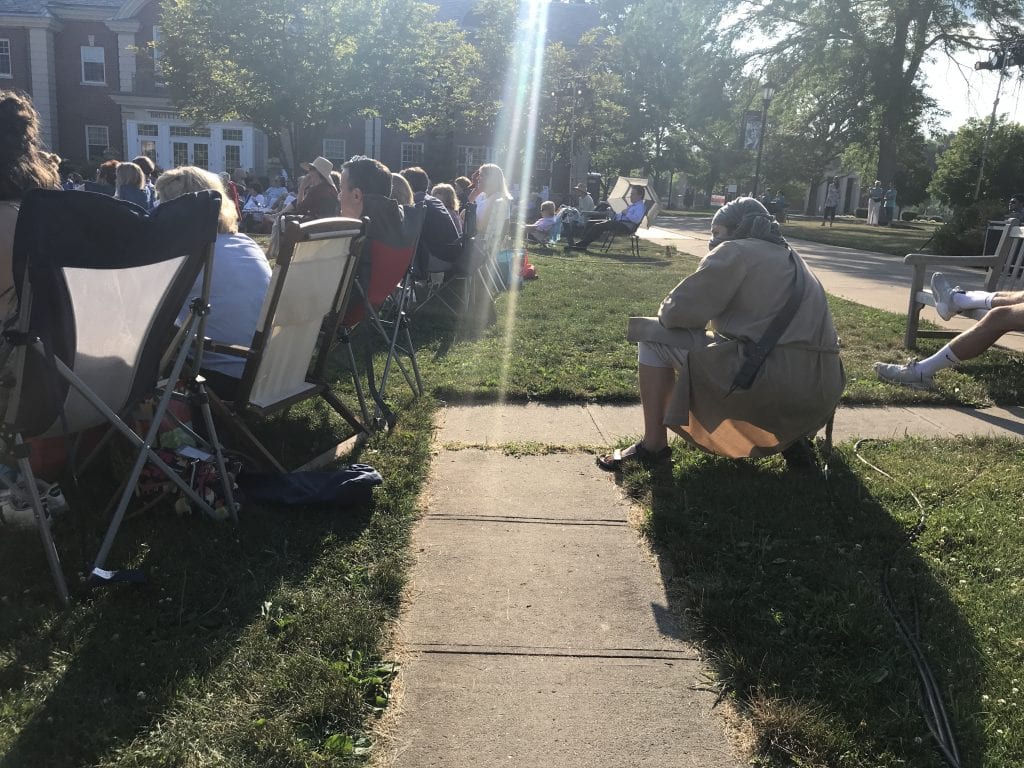 Cast members scatter throughout the audience to create an interactive theatre performance for all to enjoy. Photo credit: Maddie Geerlof 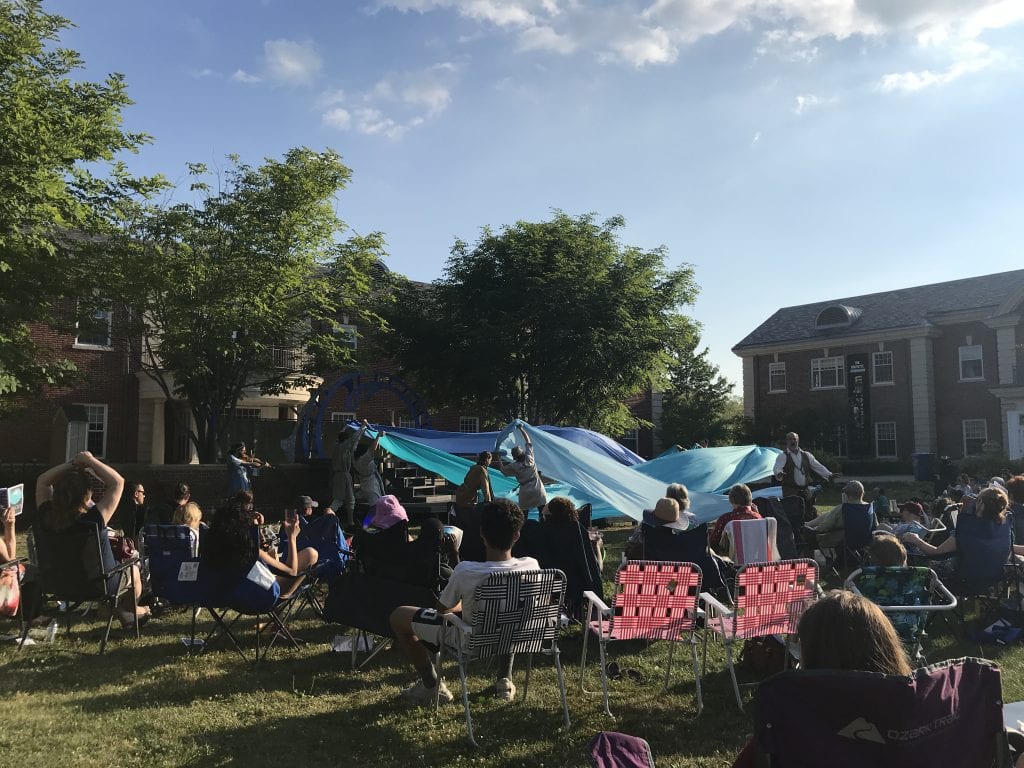 Cast members use blue sheets to bring the waves of the tempest to life during the performance. Photo credit: Maddie Geerlof 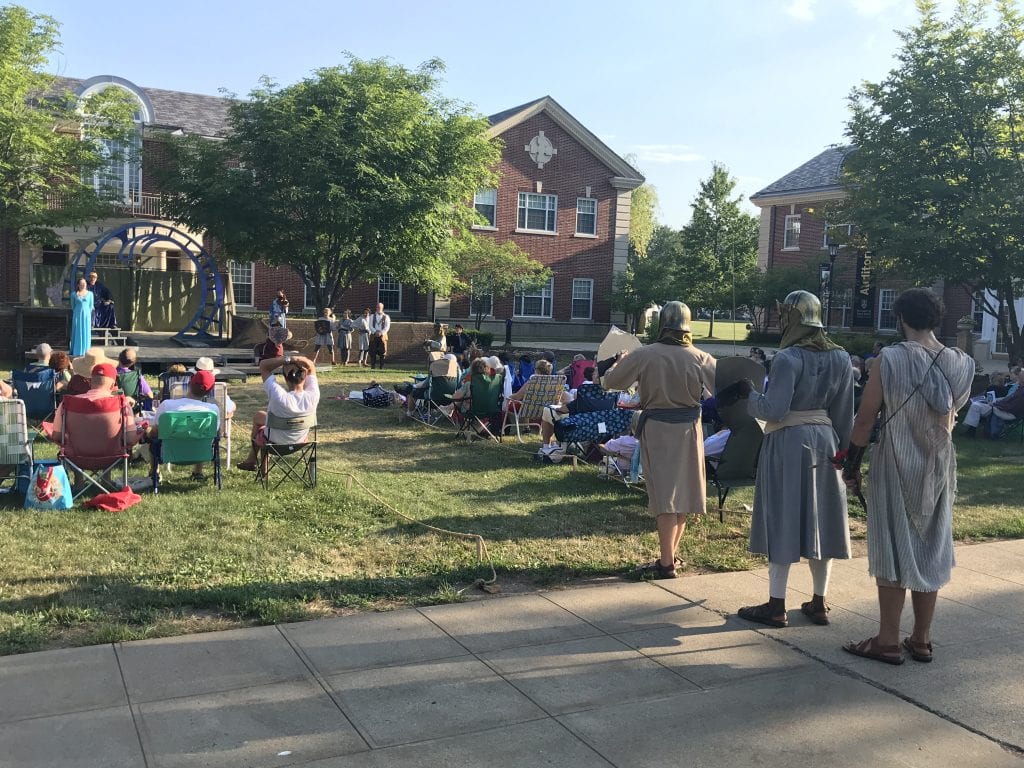 Cast members enter onto the stage during various scenes while walking through the audience. Photo credit: Maddie Geerlof