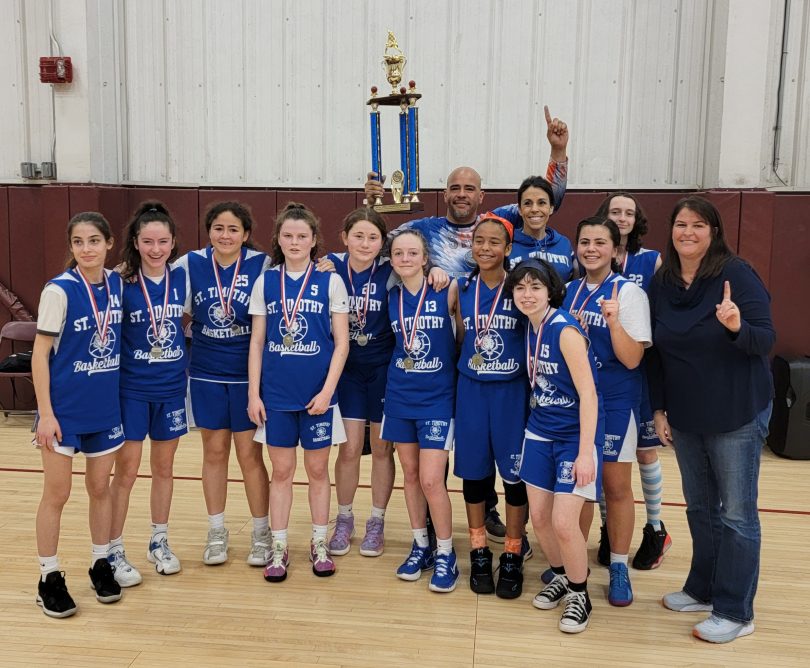 The Lady Tigers of St. Timothy Middle School in West Hartford ended the season undefeated, with both a state and regional championship.

West Hartford’s St. Timothy Middle School seventh and eighth grade girls varsity basketball team was victorious over Assumption School (Ansonia, CT) with a score of 38-28 to capture the Connecticut State Championship Title representing the Hartford Deanery division of the Archdiocese of Hartford, with a final record of 19-0.

In that final game, the Lady Tigers came back from a deficit of 6 points in the fourth quarter to take home the state title with a decisive win.

The incredible season continued in Burlington, VT for the New England CYO Regional Championship. The Lady Tigers won the first two games on Saturday, April 2, with key minutes from Rotundo, Reneson, and Bacon to help them move onto the Championship on Sunday, April 3, at South Burlington High School.

Once again, the St. Timothy Lady Tigers found themselves entering the fourth quarter down by 10 points to a very determined St. Johns team out of Fall River, MA. St. Johns had ended their regular season 28-0.

While the task seamed insurmountable, incredible defense by Canning, Gallagher, and Diaz, and impressive rebounding from Rosetta, Bradley, and Diaz, mounted the comeback.

St. Timothy cut the lead to 2 points with 47 seconds left. A key steal on the inbound by Gallagher and quick pass to Staunton for a layup tied the game. St. Johns came down with a powerful drive and Rosetta took a charge, and it was St. Timothy’s ball with 37 seconds to go. Holding for one possession Staunton hit a runner down the middle to take the lead by 2.

S.t John’s called a timeout and on the next possession Staunton stole the ball and was fouled. She made the first and missed the second. There were 2 seconds left, and the clock ran out. The St. Timothy girls came out victorious and won the CYO New England Regional Championship.

It was an incredible end of a game to an incredible season led by coaches Lobo-Lowry, Staunton, and Diaz, and a group of teammates that decided they would not lose, ending their season 22-0 with Martin Luther King Jr Championship, State of Connecticut Championship, and New England Championship!