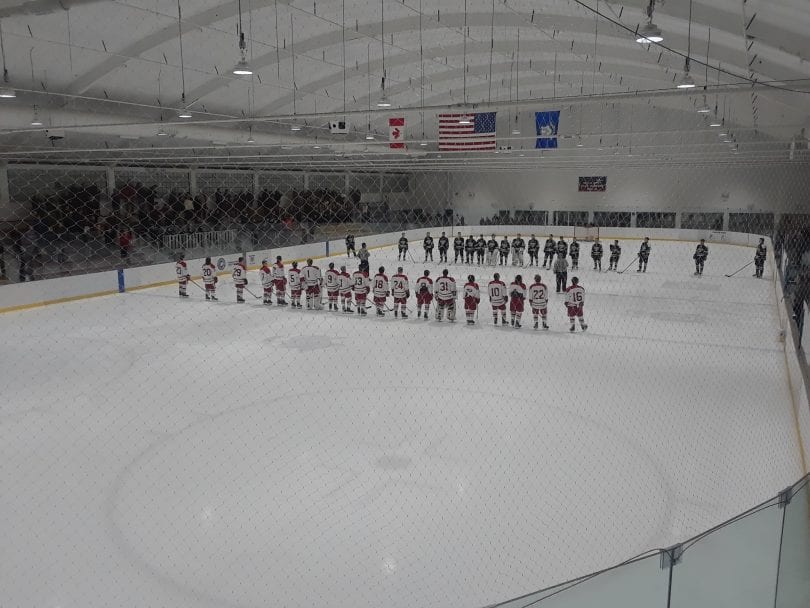 The Conard boys’ hockey team overcame numerous penalties and an early deficit in a win over crosstown rival and Division I Northwest Catholic.

Jack Starr’s 50th and 51st career goals could not have come at a better time for the Chieftains.

The senior captain scored twice to help Conard come back from a first-period deficit to beat crosstown rival Northwest Catholic 2-1 in overtime on Wednesday night at Veterans Memorial Rink in West Hartford.

After winning a face-off in the offensive zone, Starr potted the game-winning goal 1:17 into the overtime period as he shielded a Northwest Catholic skater with his back, turned around and fired the puck into the net to seal the victory.

“He is the perfect example of what a captain should be on a hockey team,” said Conard head coach Chris Tornaquindici. “He does everything that we ask him to do. If we didn’t have him around this year, it’d be real hard to accomplish what the coaching staff here was trying to accomplish.”

The Lions struck first with a goal from Brennan Horn just over five minutes into the game to take a 1-0 lead. Tornaquindici said he knew his team would have to weather the early part of the game to compete with Northwest Catholic.

“I told the guys before the game that we had to make sure we got through the first seven minutes,” he said. “Ice time is limited in this town, and we hadn’t skated for almost four days. I told them we were gonna come out flat and that’s exactly what they did, but as the game progressed … I think we actually turned the tide in the middle of the second period.”

Starr put the Chieftains on the board with 5:19 left in the second period to tie the contest at 1-1, as he scored from the slot to beat the Northwest Catholic goalie for his 50th career goal. Brent Soucy earned the lone assist on the tally.

The Chieftains and Lions finished the third period with a barrage of penalties, including five-minute majors for hitting from behind and roughing with 18.3 seconds left. Players for each team were also tagged with game misconducts.

In total, Conard racked up 29 penalty minutes but did not allow a single power play goal, despite plenty of offensive pressure by Northwest Catholic. The visitors tallied 19 penalty minutes, but their penalty kill only took the ice once, as many of the Lions’ infractions were coincidental with the Chieftains’.

Conard netminder Shea Henderson rebounded from an early goal allowed to turn in an impressive performance, withstanding sustained pressure from Northwest Catholic for most of the night, especially on the penalty kill.

Conard improves to 6-4 on the season following the win, and is in fourth place statewide in Division II. The Chieftains extend their winning streak to three and have won six of their last seven games. Northwest Catholic, a Division I team that was ninth in the Hartford Courant’s state rankings last week, falls to 5-3-1 with the loss.

Both teams return to action on Saturday. Conard will host Glastonbury at Veterans Memorial Rink in West Hartford at 1 p.m, while Northwest Catholic will host Simsbury at the International Skating Center of Connecticut in Simsbury at 5:50 p.m.