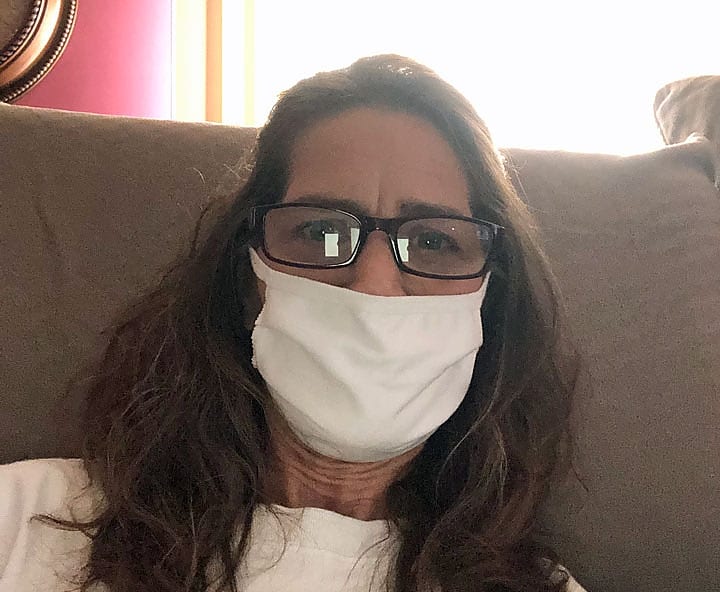 Instead of a regular shipment of gloves, gowns, surgical masks, and face shields, individuals who have home care aids through Medicaid will receive five cloth masks per quarter.

As a disabled person who is bedridden when not in her wheelchair, Sharon Thorstenson depends on two personal care aides to see to her daily needs while keeping her safe from COVID-19.

Two months ago, she lost her father to the virus which has killed 4,468 state residents since March.

Thorstenson, a 55-year-old Southington resident, is concerned that a new directive issued by state officials that limits personal protective equipment (PPE) distribution will put her, her aides, and the public in jeopardy.

“We’re less than two feet apart when they transfer me to my wheelchair, put me on the toilet, or put me back in bed,” Thorstenson said. “There is no way they can stay six feet away from me.”

As some of Connecticut’s largest cities including Hartford are set to honor home care workers Friday, the state Department of Social Services has announced it will cut PPE to a request-only distribution system in the Community First Choice Medicaid program unless the client has symptoms of COVID-19 or has tested positive for the virus.

The directive will halt the regular shipment of gloves, gowns, surgical masks and face shields to consumers who have home care aides in favor of five cloth masks per quarter, according to a letter by Melissa Morton, lead planning analyst with the Office of Policy and Management.

The move will impact 10,000 predominantly Black and brown women who work as home care aides serving 6,000 consumers who need help with their daily needs, according to New England Health Care Employees Union SEIU 1199, which represents most of the aides.

The state has regularly provided PPE to hospitals and nursing homes during the healthcare crisis, said Josh Geballe, chief operating officer for Gov. Ned Lamont. Stocks of PPE are now adequate and the facilities should be acquiring their own, Geballe said. Geballe did not specifically mention home care workers when asked Thursday why DSS was no longer providing PPE to home care clients or aides.

DSS, which funds the home care program with Medicaid funds, has distributed 898,772 surgical masks, 369,918 pairs of gloves, 6,630 gowns and 454 face shields since March 24, according to Morton. Other home care programs are offered by the state Department of Developmental Services, but it’s unclear if that agency has also stopped routinely providing PPE.

Many private home care agencies do provide PPE to their employees. But some home care workers like Shomit Sengupta work for both a private agency and a consumer who is on Medicaid through DSS. His DSS client must procure their own PPE, which the West Hartford resident said can be a problem.

He doesn’t buy the state’s argument that the DSS client who is receiving funding from Medicaid is his employer. “The consumer isn’t funding it,” Sengupta said. “The state is. The state has a responsibility not just to us but to the consumer. They need it too. It should be required.”

But as of Aug. 29, DSS will no longer issue the items without an online request. People can seek an emergency shipment within 24 hours if needed, Morton said in the letter to the union. But the biweekly shipments of 50 surgical masks and five to 25 sets of gloves have stopped retroactive to Aug. 29, Morton said.

In place of the regular shipments, all consumers now will receive an “emergency kit” with KN95 masks, 50 pairs of gloves, 30 gowns and two face shields in case they become infected with COVID-19, state officials said.

Everyone in the program will receive five cloth masks per quarter in accordance with Centers for Disease Control and state Department of Public Health guidelines, Morton said.

From March to July about two-thirds of SEIU 1199 NE members reported not having adequate PPE to work safely, union officials said in a letter to DSS Commissioner Deidre Gifford, who is also the acting Commissioner of the Department of Public Health. When DSS began sending out biweekly shipments of PPE in July, the reports decreased, the union said.

“Home care workers are extremely concerned that DSS has decided to suspend its biweekly distribution of surgical masks and gloves,” union officials said. “This decision will place at greater risk the 16,000 predominantly low-income and disproportionately Black and brown women who rely on or who are employed through these programs.”

Thorstenson says the state-issued cloth masks don’t fit properly on her face and make it difficult for her to breathe. Her two aides often must take her out in public for medical appointments, and she worries that the trips could put the public at risk if she and her aides don’t have proper PPE.

“DSS claims it’s their job to support us, but how are they saying they are supporting us by cutting off our PPE for us and for our personal care assistants?” Thorstenson said.