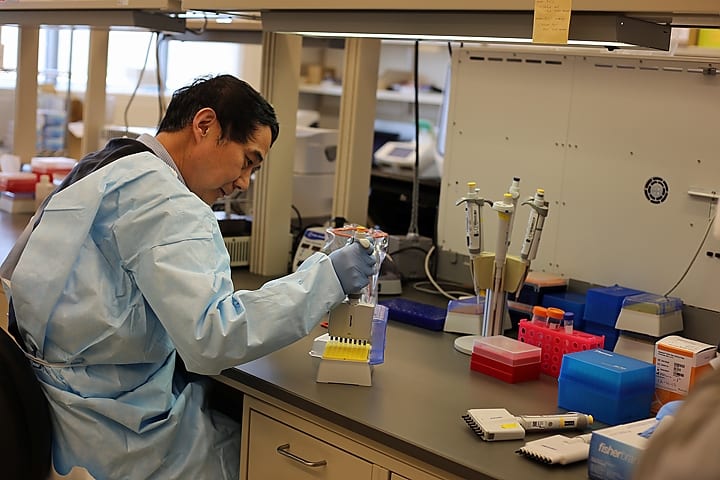 Xiugen Zhang, a microbiologist in the state lab. Photo courtesy of CTNewsJunkie

The error affects 90 people, most of whom were nursing home residents, but the locations of the nursing homes was not provided.

The state Department of Public Health has notified 90 people, mostly in nursing homes and assisted living facilities, that their positive COVID-19 test results were false, based on a flaw discovered in a testing system last week – but how the inaccurate results affected their care is not known.

On a conference call with reporters Monday afternoon, acting DPH Commissioner Deidre Gifford said that last week, while validating tests for the feasibility of pooling samples for group testing in order to save supplies and labor, DPH Laboratory Director Jafar H. Razeq and his team found some “inconsistencies in some of the results.”

Upon further review, Razeq said they discovered a flaw in a “widely-used laboratory testing platform” that the state began using on June 15, and which it stopped using on July 17. Razeq said some of the baseline samples used in the testing equipment – which was provided by a national vendor called Thermo Fisher Scientific – were supposed to be positive for COVID-19. But the lab discovered that the samples were not, in fact, positive for the novel coronavirus.

“We needed previously known positive samples to be used in this validation,” Razeq said, adding that they started looking at previously tested specimens last Wednesday.

By Thursday, the lab determined that the flawed Thermo Fisher testing platform produced false positive results for 90 of the 144 individuals who tested positive between June 15 and July 17, officials said.

“If it had not been for us looking into the pool testing, to use some of these previously known positive samples, there were no indications that any of these reported positive results would have been questioned,” Razeq said, adding that the quality control indicators that the lab uses would not have caught the erroneously false positive samples.

Of the 90 people affected, one was a patient at an acute care hospital. The rest were residents of nursing homes and assisted living facilities.

“We have notified the healthcare facilities for everyone who received a false positive test result from our state laboratory,” Gifford said. “Accurate and timely testing for the novel coronavirus is one of the pillars supporting effective response to the COVID-19 pandemic. Thanks to the quick action of our team at the state lab, adjustments have already been made to ensure the accuracy of future test results from this platform.”

Gifford said all the people who were given false positives will be retested, however, when asked whether they had tracked down the status of all 90 patients, she said they had not.

Specifically, reporters asked whether any of the residents with false positives were moved into COVID-positive facilities, and whether as a result they had later contracted the virus. Both Gifford and Josh Geballe, chief operating officer for the Lamont administration, said they were still tracking down that information.

“We don’t have an answer to your question yet as to actions that were taken specifically as a result of this one test,” Gifford said. “As I mentioned, many of these individuals had had multiple tests, so one test result wouldn’t necessarily have changed their clinical management, but our [Epidemiology] team and our Facilities Licensure team are working with the facilities now to understand what the clinical circumstances were.”

Gifford said they have the data they need to track down each person who was given a false positive, but would need more time to do that.

State data for COVID-19 positive cases will be adjusted to reflect the corrected numbers, officials said.

“All of that investigation is underway as we speak,” Gifford said, and Razeq added that they were in communication with all of the state’s private lab partners in an effort to determine the extent of the problem.

“This is going to apply to a minority of tests in the state,” Gifford said. “We are working to find out, you know, exactly what percentage would be potentially implicated by this system.”