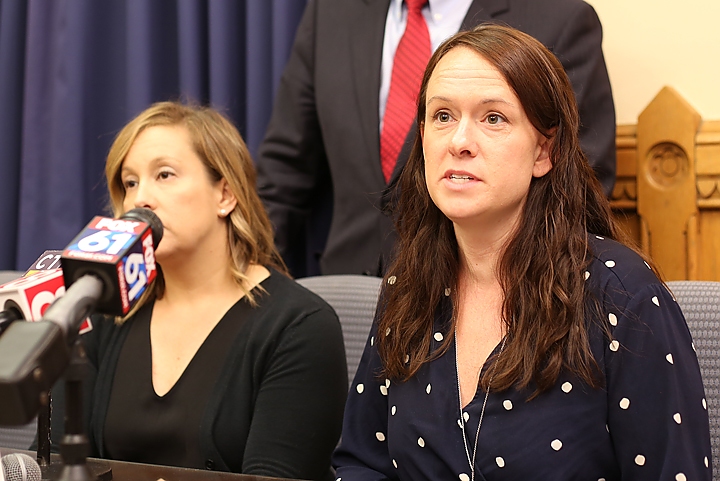 State Rep. Jillian Gilchrest held a press conference Thursday to promote a bill that would place a 35% excise tax on ammunition.

State Rep. Jillian Gilchrest of West Hartford (D-18th District) has introduced a bill which she said will support efforts to reduce and prevent gun violence in affected communities through the implementation of a 35% excise tax on the sale of ammunition sold in stores or online.

H.B. 5040, An Act Establishing an Excise Tax on Ammunition, has been referred to the Joint Committee on Finance, Revenue and Bonding.

“Connecticut’s urban centers experience some of the highest rates gun violence in the United States,”Gilchrest said in a statement. “Local organizations have worked tirelessly to prevent and address the violence, but the state has not adequately invested in their work. This policy will have a concrete effect on the day-to-day operations of groups that are on the ground preventing gun violence and helping survivors as well as the loved ones of those lost to the epidemic.”

The bill has the support of House Majority Leader Matt Ritter (D-Hartford) and State Sen. Doug McCrory (D-Hartford), who both issued statements last week in favor of the measure.

“There are amazing gun violence prevention programs that will benefit from this funding,” said Ritter. “We see the statistics. We hear the stories. Gun violence is an epidemic. I applaud Rep. Gilchrest for leading the way on this issue.”

“Too many families have experienced the pain and heartache of gun violence,” said McCrory, who is a gun owner. “We can take action to prevent future tragedies by investing in violence prevention programs and the security of places of worship. This proposal supports this need for action and re-affirms our state’s leadership on gun violence prevention.”

Representatives of advocacy organizations also voiced their support Thursday for the measure.

“I applaud Representative Gilchrest’s bill as it will directly benefit and impact the underserved population within the urban area of Greater Hartford,” said Deborah Davis of Mothers United Against Violence. Davis lost her son to gun violence in 2010 and has since become an advocate on the issue.

Gilchrest said that the Connecticut General Assembly’s Office of Fiscal Analysis estimates that $25 million in ammunition is sold annually, and current revenue at the 6.35% sales tax rate generated $1.6 million in sales tax revenue last year. Increasing that to 35% would generate more than $7 million for gun violence prevention and reduction efforts.

Opponents of the bill question it as perhaps an attempt undermine the 2nd Amendment, and also question whether or not it will prevent illegal activity.

CT News Junkie reports that Holly Sullivan, president of the Connecticut Citizens Defense League (CCDL), said the “35% tax on ammunition would put more people at risk. Lower income individuals who typically live in more dangerous neighborhoods will likely be priced out of the most effective means of gun safety which is target practice and developing safe handling skills.”

Gilchrest proposed a bill last year that would have required a 50% excise tax on ammunition, but the measure never made it past the Finance Committee.

Gilchrest said that according to a 2019 Congressional report, gun violence costs the state approximately $1.2 billion.

Additional information can be found here on CTNewsJunkie.com.